Miyoshi City’s secluded Iya Valley is surrounded by soaring mountains which offer some of the best hiking trails in Shikoku. In this series, we detail an intermediate yet challenging two-day trekking route full of magnificent views that is accessible by public bus, with staying overnight in one of the rustic mountain-ridge huts.

Being that it was early June, the sun rose that day at 4:50 AM, with the first light starting a half hour before that. This was just a bit too early for me to get up for, especially since the sun came up at this time of year behind the towering Mt. Nishikuma upon which the hut was located, so it meant I would need to hike up a rather substantial way in order to see the sun come up over the horizon. 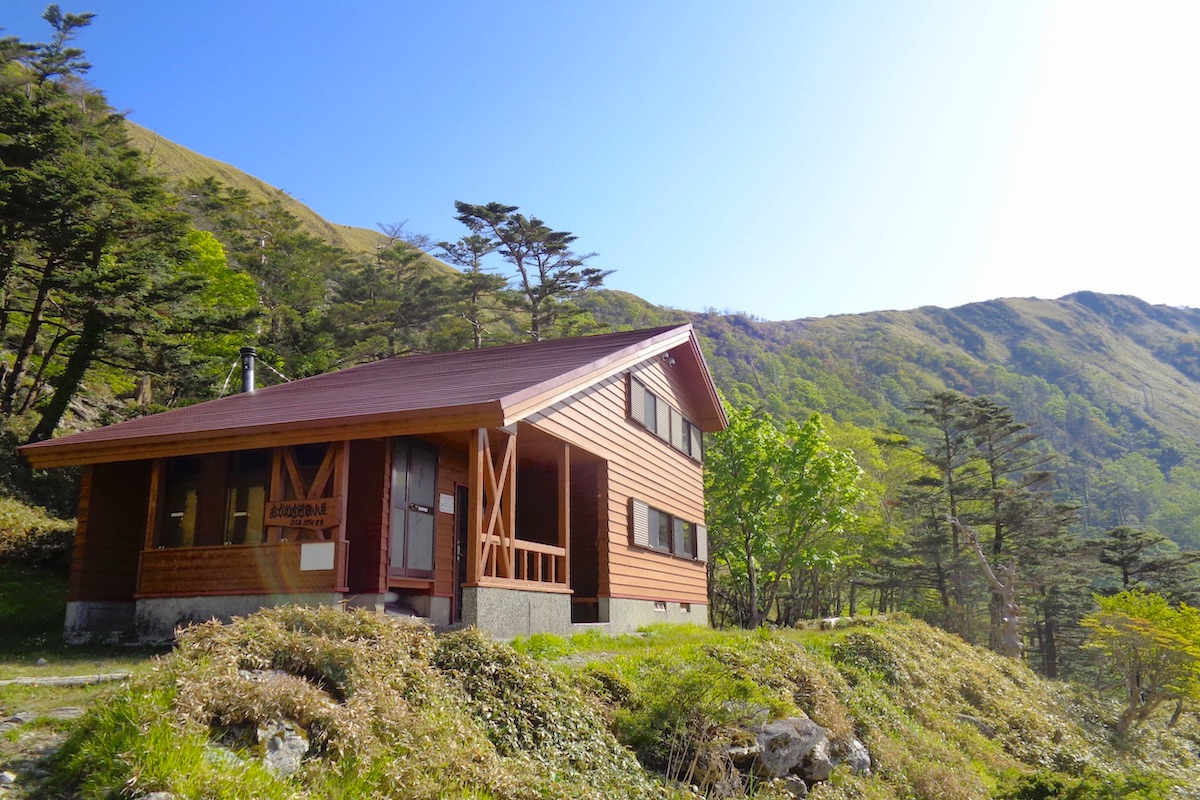 But for those who never stayed in a Japanese mountain hut, be forewarned that the other people you may be sharing the hut with will probably rise early for the sunrise, and they usually aren’t too quiet about doing so. Fortunately, I was the only person staying at Okameiwa Hut that night, so I could peacefully sleep in.

The sun crested Mt Nishikuma at about 6:00 AM, so I got up and made some coffee and a cup of instant noodles, and enjoyed them outside in the fresh morning. 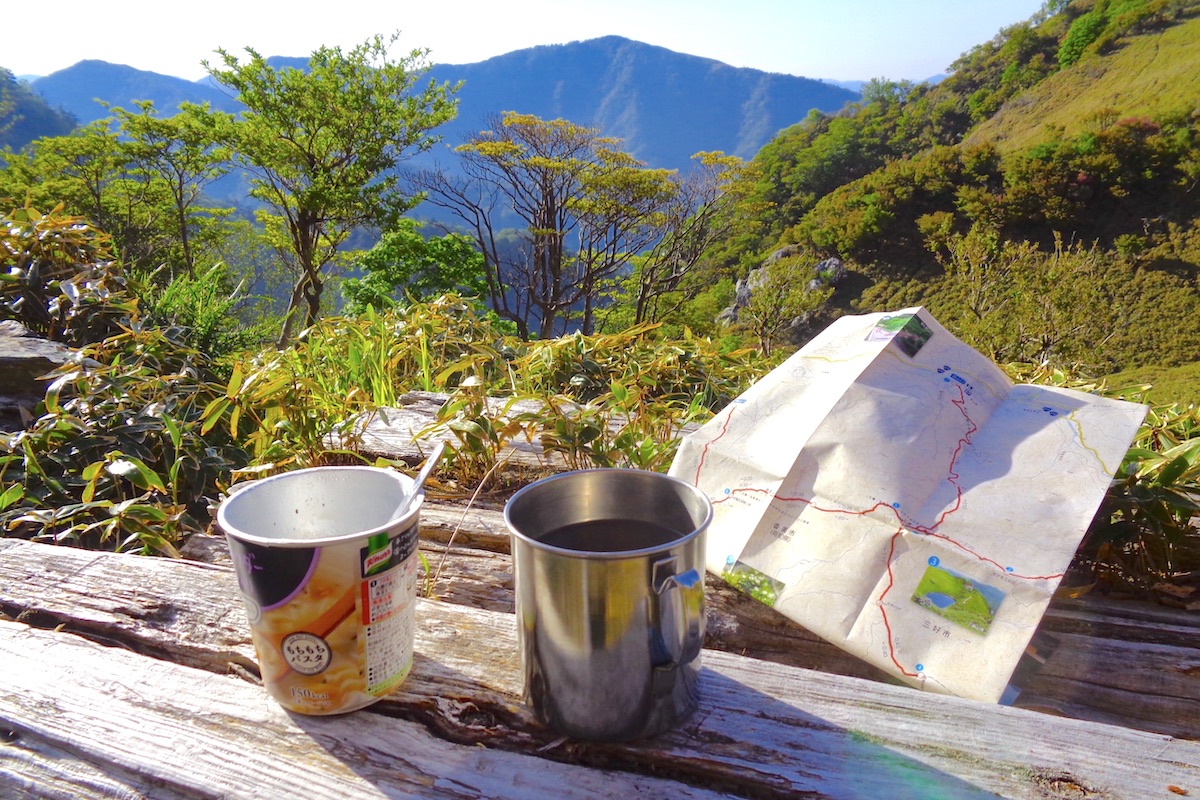 Back on the ridge trail to Tenguzuka

I packed up and set off back up to the main trail to continue along the ridge. Once again, I spotted several deer frolicking in the sasa grass as I emerged from below, and was also once again too slow with my camera.

The trail meanders through some trees and at a few points it can be particularly steep such that ropes are here to help go up/down, but only for short stretches of 5 or 10 meters.

For a good portion along here the ridge trail also goes upon the top edge of an extremely steep hill. 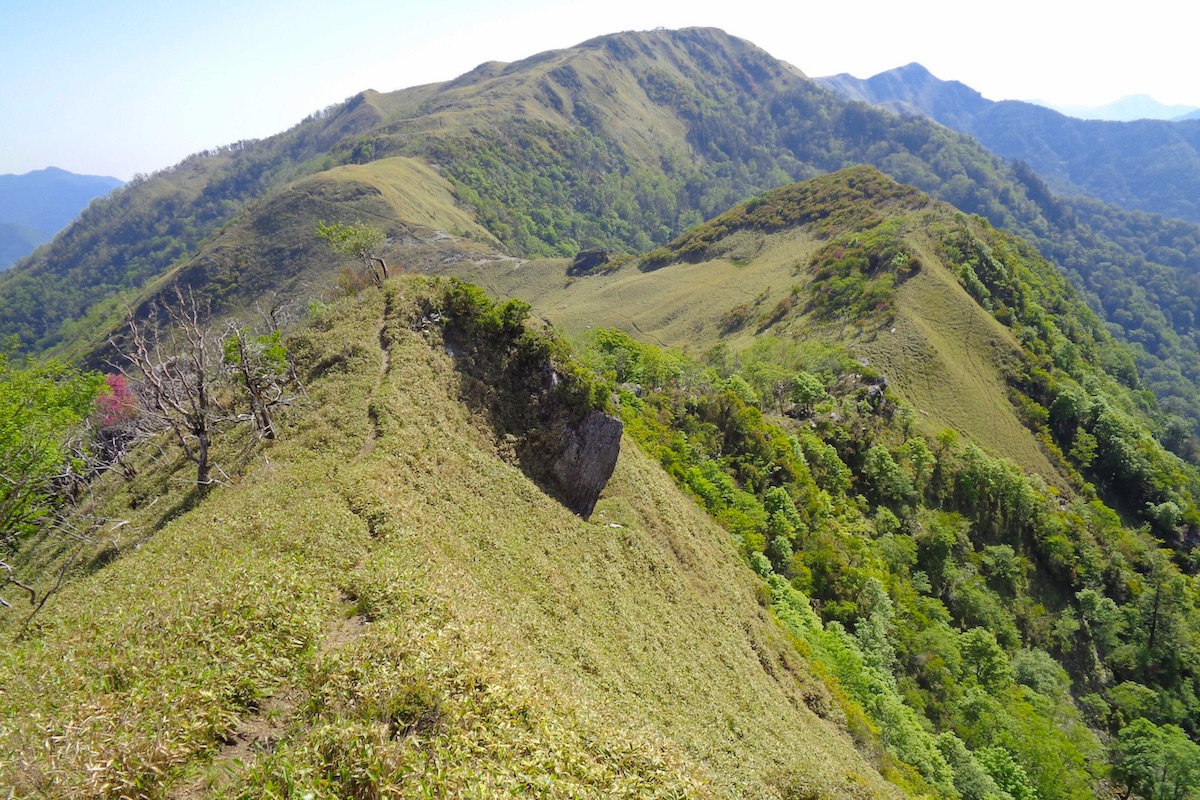 Though the view is amazing, I once hiked here years ago when it was quite windy and it was rather difficult to pass through. Luckily it was fairly calm this day, but this would not be a place to hike during a storm.

A land of mythical creatures

About 30 minutes from the hut I reached the rounded pass at top, which is commonly called “Tengu Pass”. 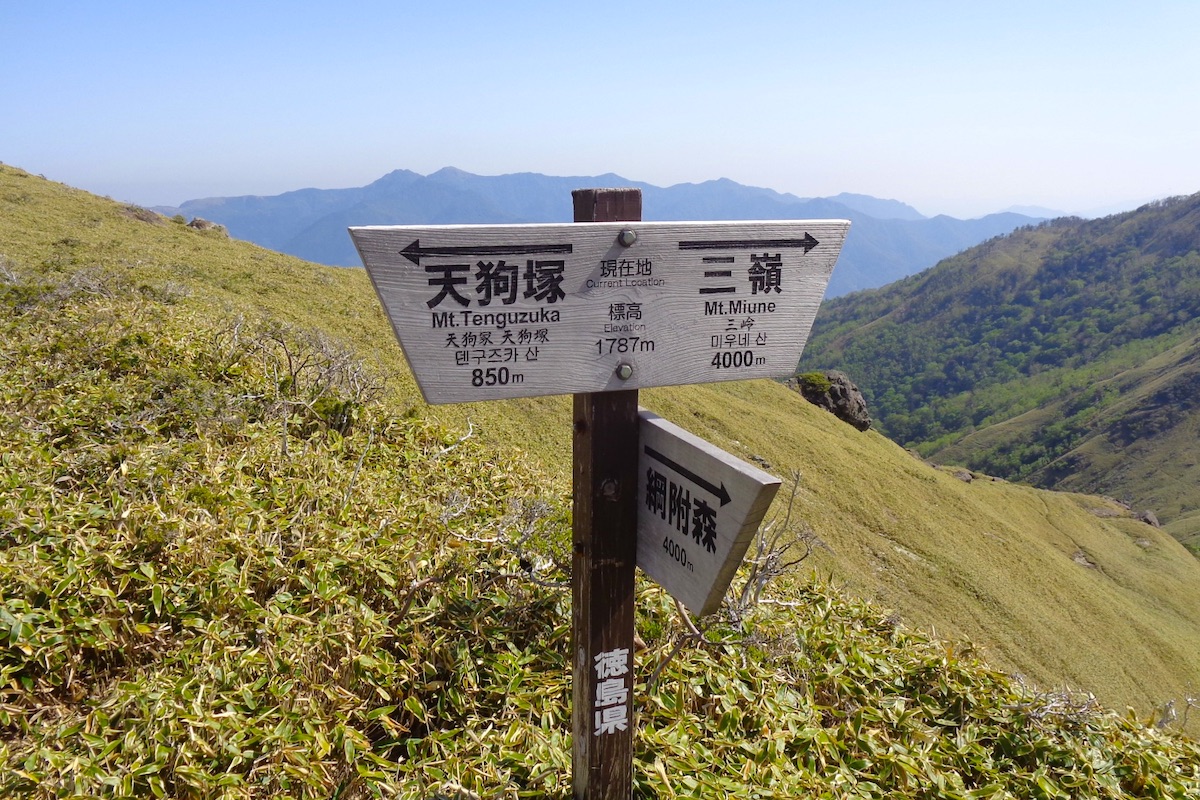 But it is also known locally as “Izari Pass”, which is an old and now unused word for “crawling”. Iya legends say that a giant once tried to cross this pass, but it was so high that his head hit the sky, so he had to crawl over the pass instead.

Yet regardless of the name, from here the full glory of the pyramid-shaped Mt Tenguzuka finally came into view. The mountain’s name means “Tengu Mound” with a “tengu” being a man-like creature of Japanese folklore which has a red face and huge nose.

The path continues west from the pass for another few minutes and then reaches a trail junction with an equally commanding view of the mountain. After going to the top of Mt Tenguzuka it is necessary to return back to this point and then go down the connecting trail in order to depart down to the trailhead. 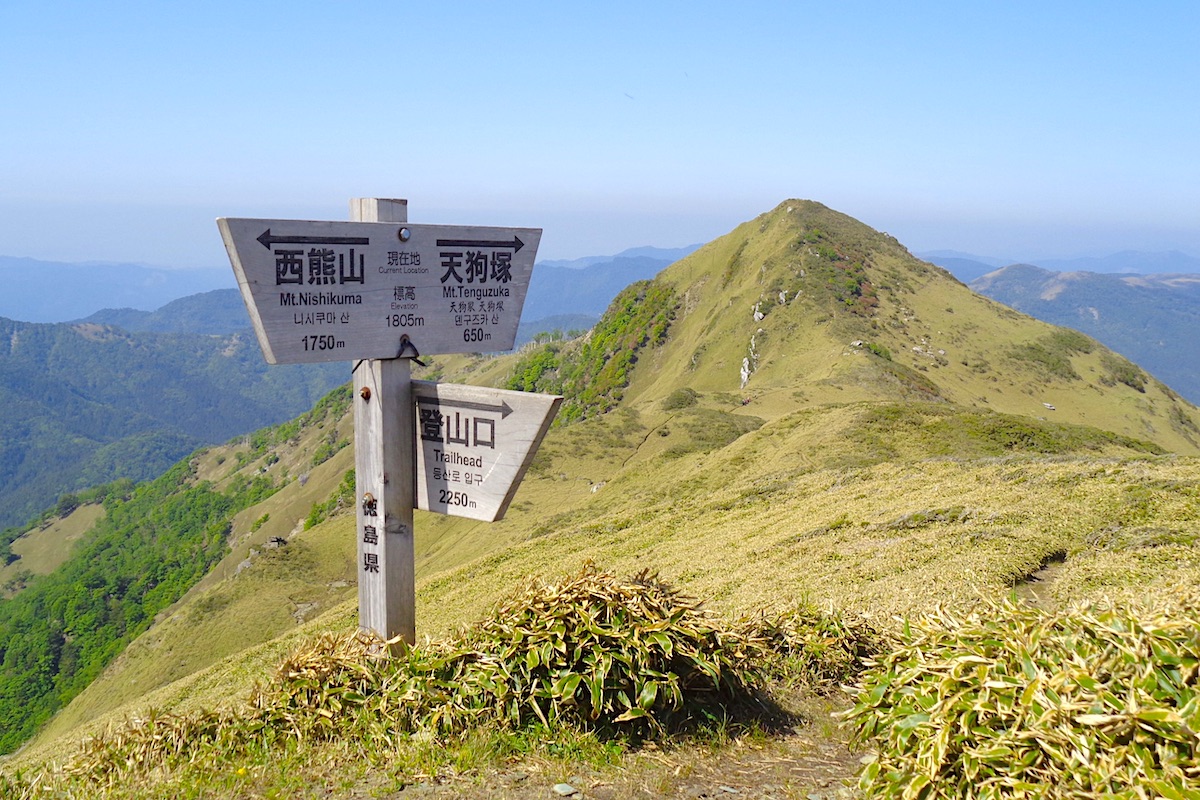 The walk out to Mt. Tenguzuka is almost otherworldly, particularly in the quiet isolation of this highland realm. It takes about 15 minutes to get to the foot of the peak.

Off to the west of the peak is a broad curving hill covered in sasa grass called “Ushi-no-se”, which means “Cow’s Back”. 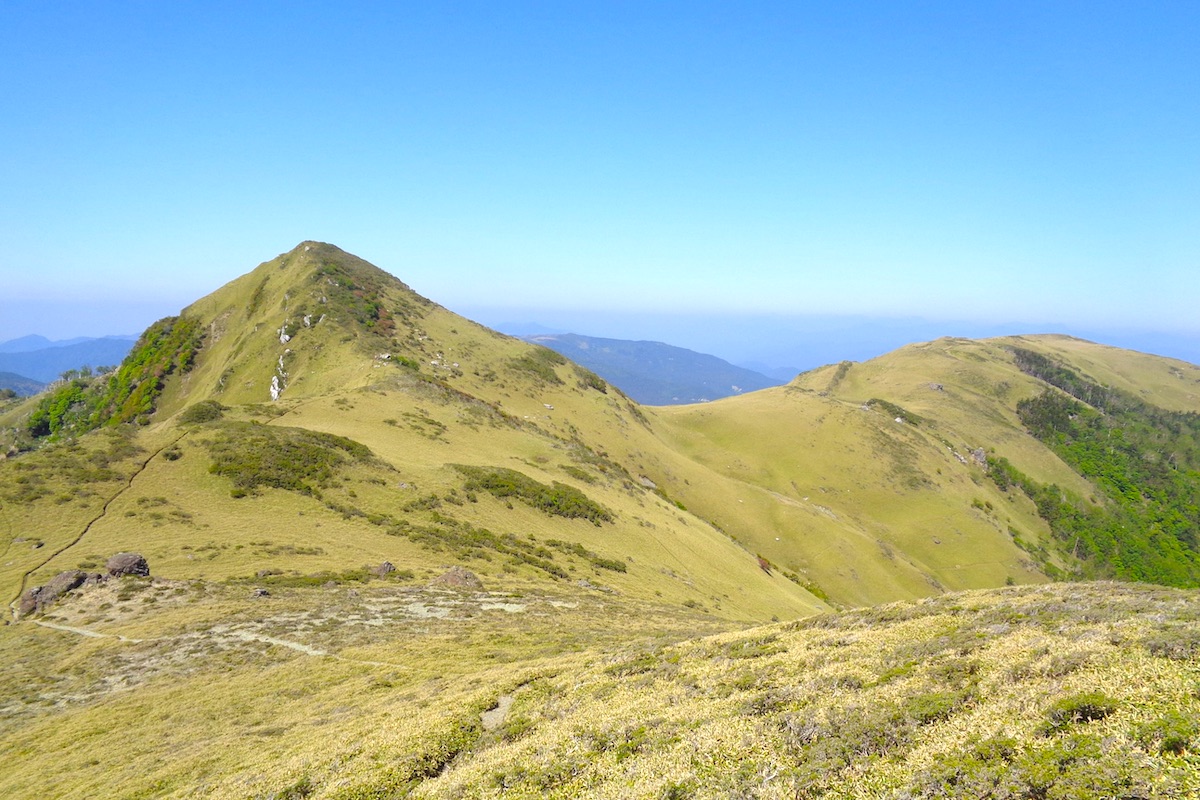 Reaching the summit of Mt Tenguzuka

The final climb up Tenguzuka peak is quicker that it seems, and takes only about 10 minutes from the base. 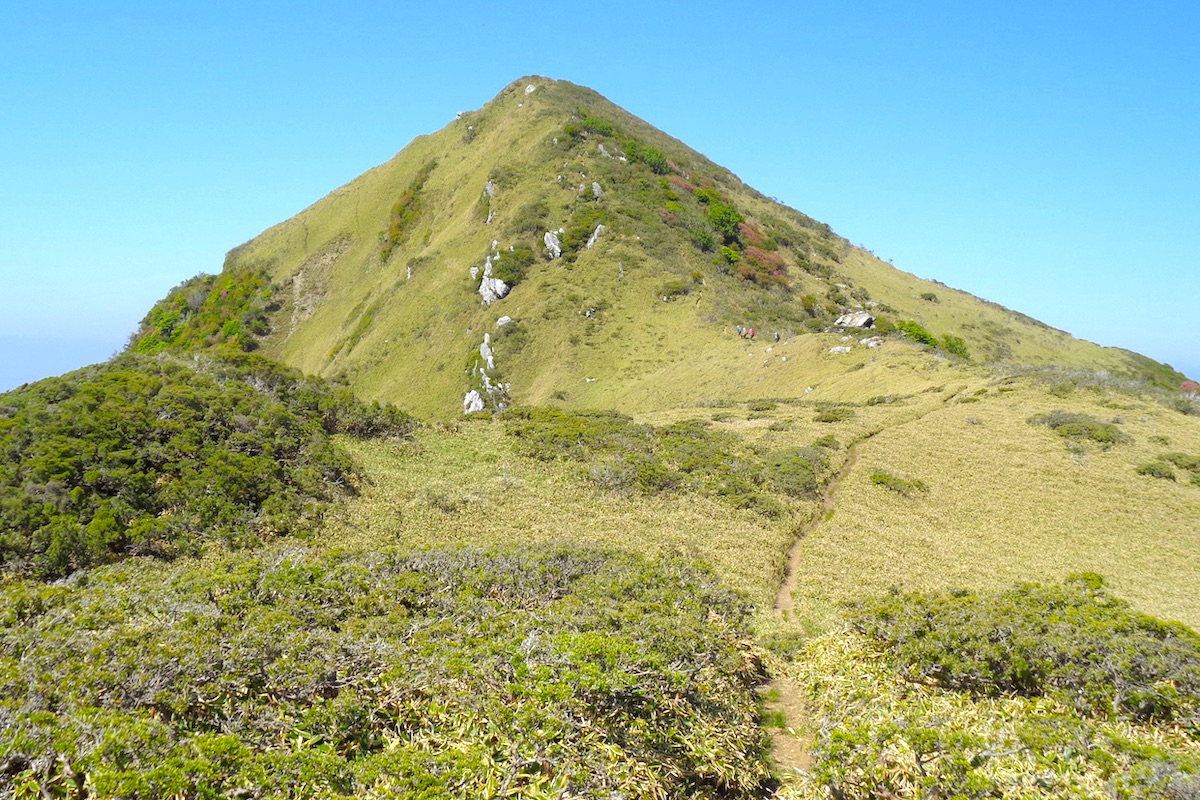 Once on top I was greeted by a small group of hikers who were already here. They had come up early that morning from the trailhead I would later that day be departing from.

We took photos together and all enjoyed the awesome 360 degree view from the 1812 meter summit. 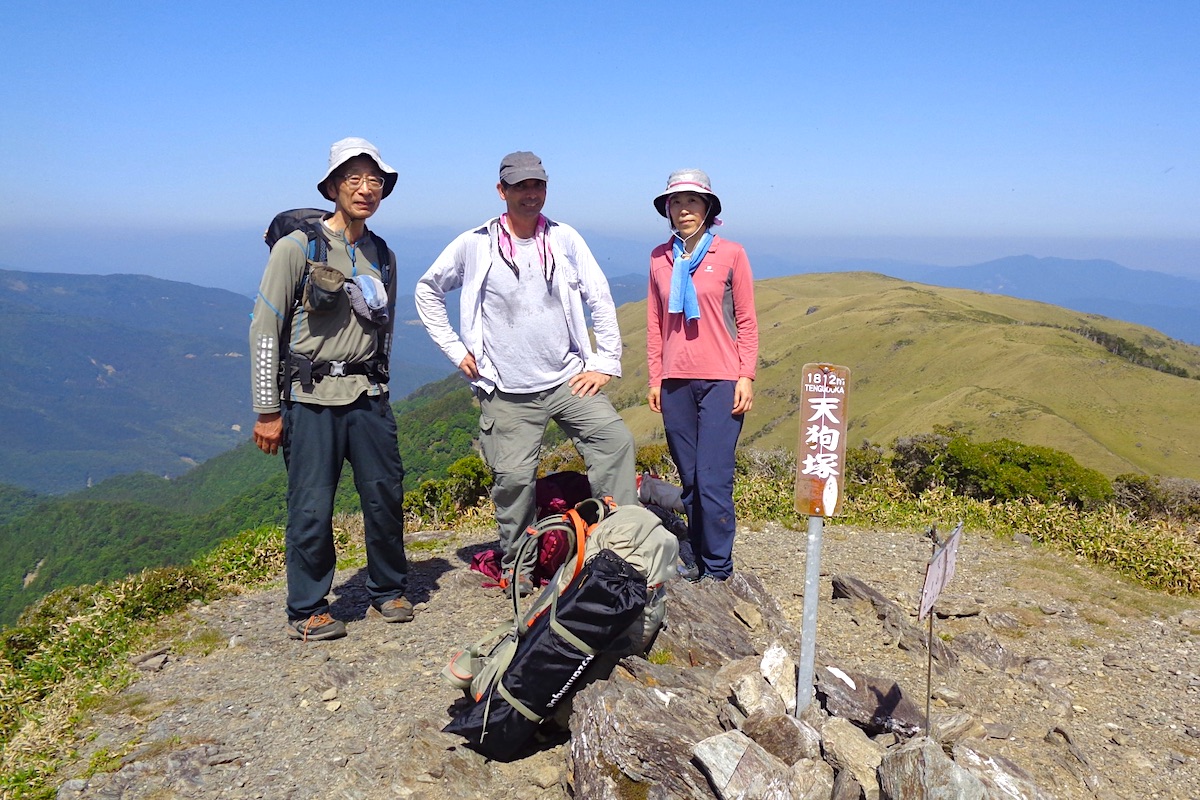 Surrounded by distant mountains in every direction, it felt like we were on an island in the sky.

In Part 6, I descend from Mt Tenguzuka to finish the hike.

For more info about this trail to Tenguzuka, including interactive maps in English, check the Mt Miune page on the IyaTime website: