Surrounded by some of the highest mountains in western Japan, the isolated Iya Valley of Tokushima Prefecture’s Miyoshi City is a fantastic place for hiking and camping. In this 6 part series, we detail a two day hiking route full of awesome views that is accessible by public bus, with an overnight in one of the rustic yet tranquil mountain-ridge huts.

The trailhead for Mt Miune in Nagoro village is located at an elevation of 915 meters, and being that the summit is at 1894 meters, it meant that there was nearly 1000 meters of elevation gain ahead (actually, at one point the trial descends for about 30 meters, so the total amount of climbing needed is just a bit over 1km).

For most people in decent shape it takes about 3 to 3.5 hours to reach the top.

The first part of the trail is quite steep, but it is easy to follow within the forest, with bright pink ribbons on trees to show the way. 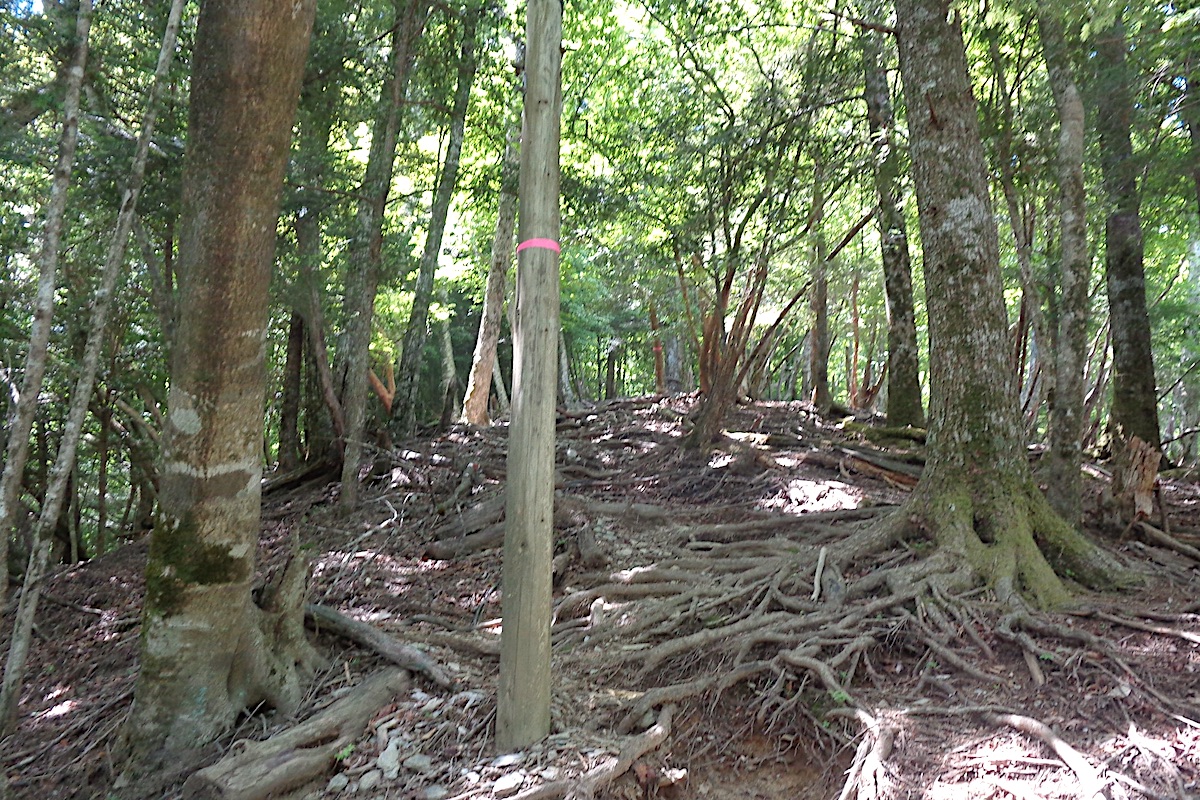 After about 10 or 15 minutes there seems to be a split in the trail with a wider section going more level to the right, but just stay to the left here and follow the pink markers upwards.

The steepness continues relentlessly for the first section of the hike, and as I got deeper into the forest the sounds of chirping birds and creaking insects filled the air.

It was mid-week, and though the parking area below had several cars there for other hikers, I was the only person climbing up this day from the incoming bus. In the first two hours I only passed two other hikers who were descending down in the other direction.

The trail crosses a forest road after about 40-50 minutes from the start, and this is a good spot for a break. A couple signs here note the distance and direction. 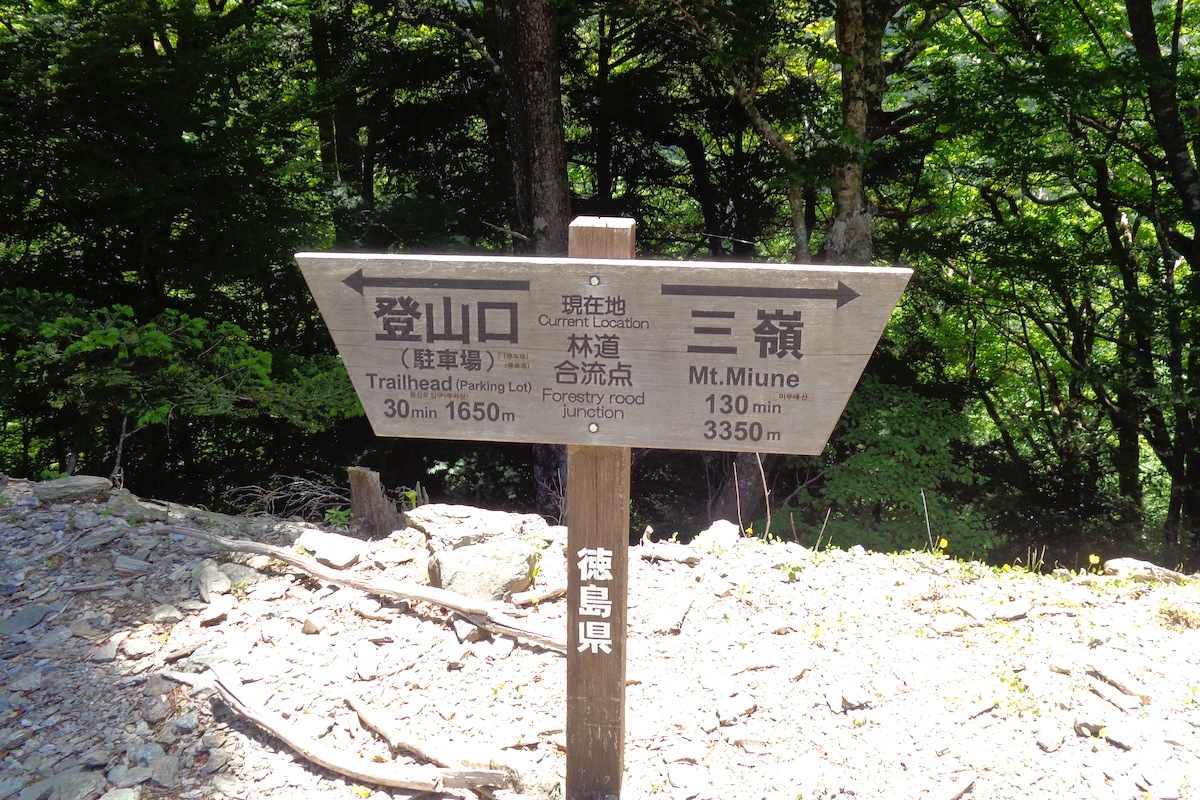 From here, the trail goes up a set of steps and back into the forest, but for the next section it is not as steep. As I moved through I spotted a couple deer that started running off 30 meters away upon hearing me.

I took another long break about 45 minutes or so from the forest road atop a small hill full of Nikko fir trees (“dake-momi”), which are a type of conifer with short needles. The whole area here was ringed with netting due to the deer, which enjoy eating the bark of these trees, and this unfortunately kills the tree. 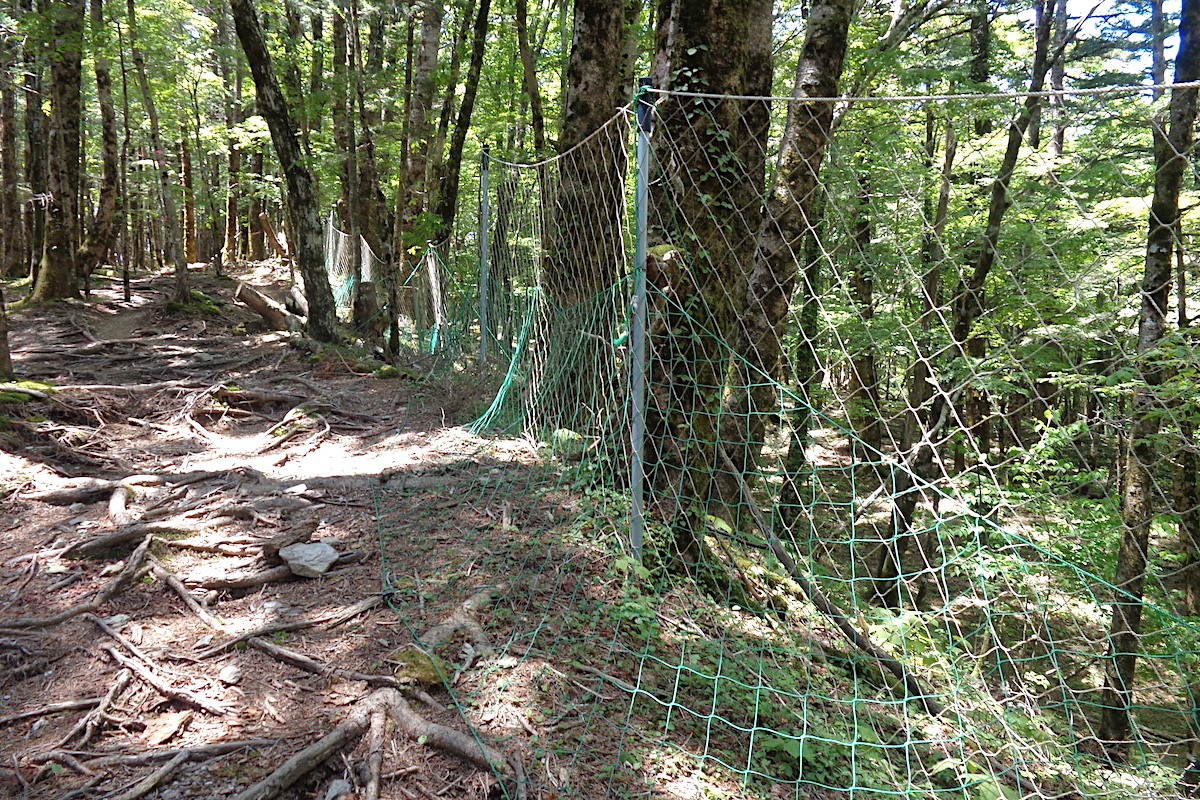 The trail descended just a bit from here, but it was quickly heading upwards again in its notoriously steep fashion. After another 30 minutes there was the first break in the trees which opened up to the first views of the neighboring mountains. 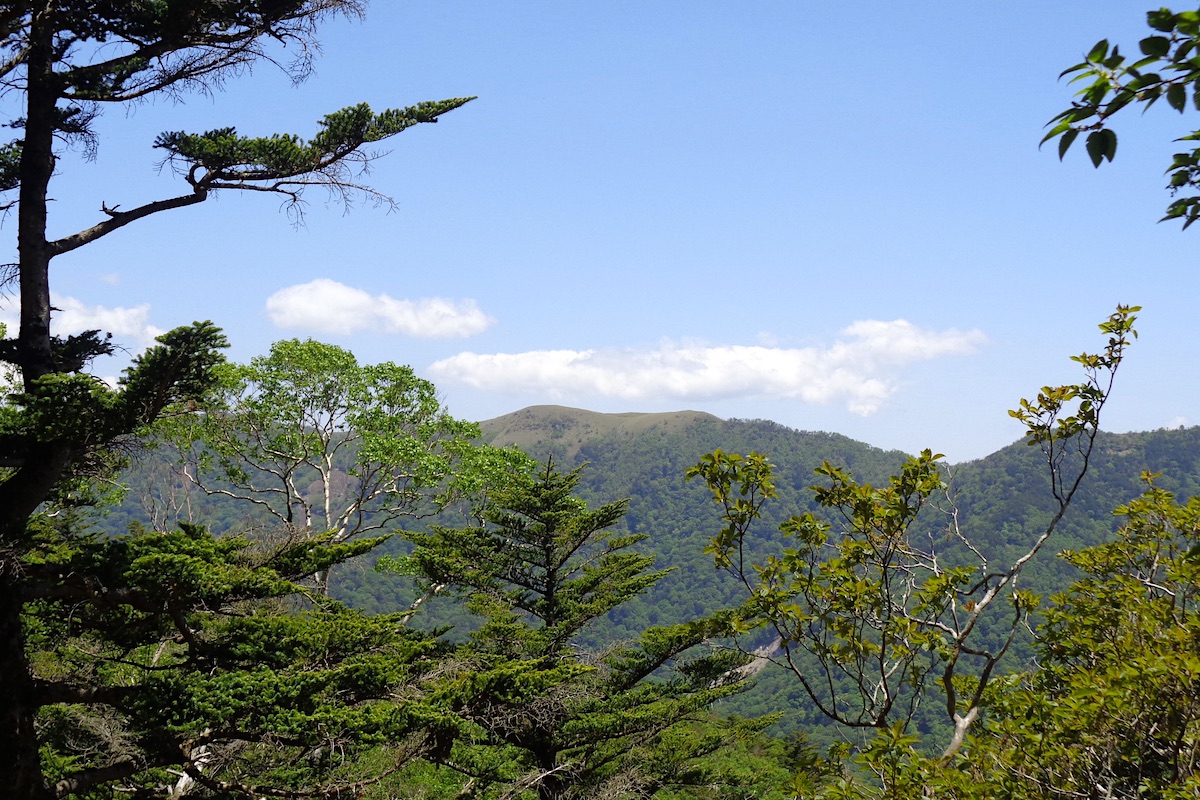 Another 30 minutes of steepness ensued with the trail becoming more rocky, but afterwards I was now above the tree-line.

From here onwards, until the final descent mid-day tomorrow, the surrounding views would now be continuously unobstructed and majestically panoramic. 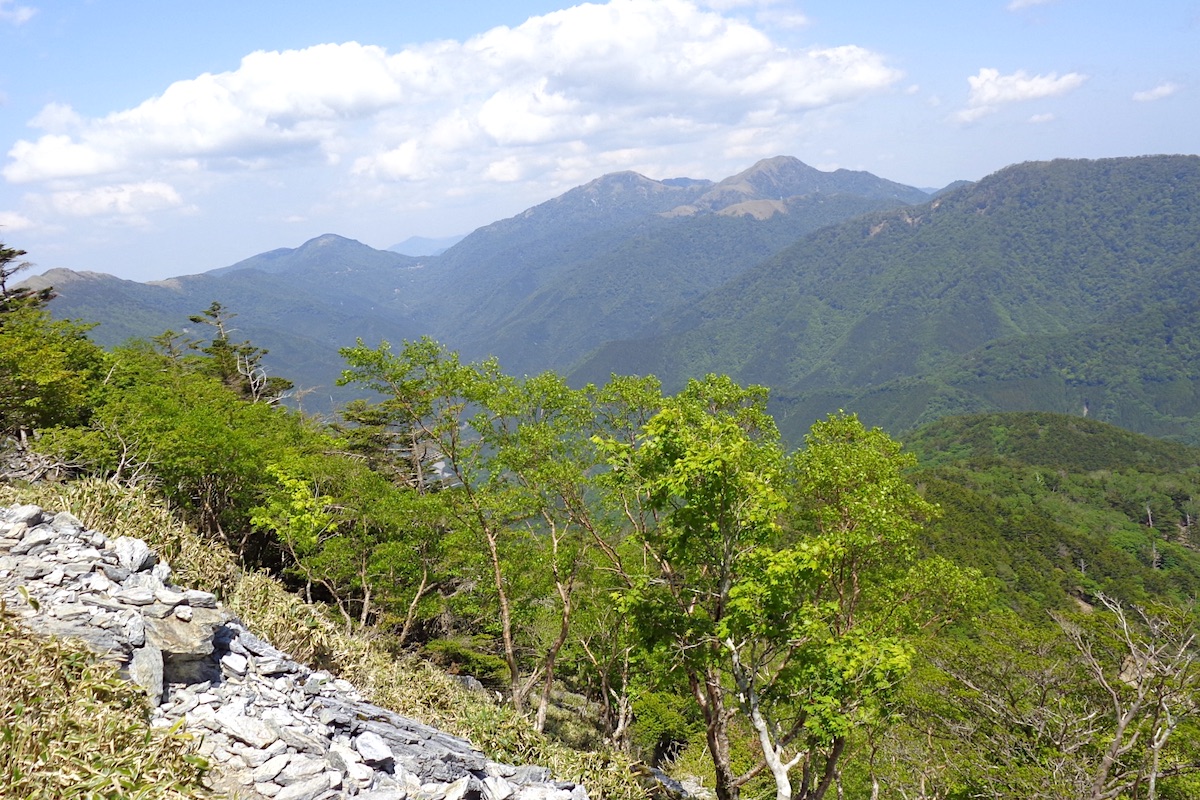 Within a couple minutes of exiting the forest a small sign pointed left to a water spring off about 60 meters away, so I followed it out to refill my bottles.

Be careful, the final part down to it is nearly vertical, but luckily there is a rope here to use. 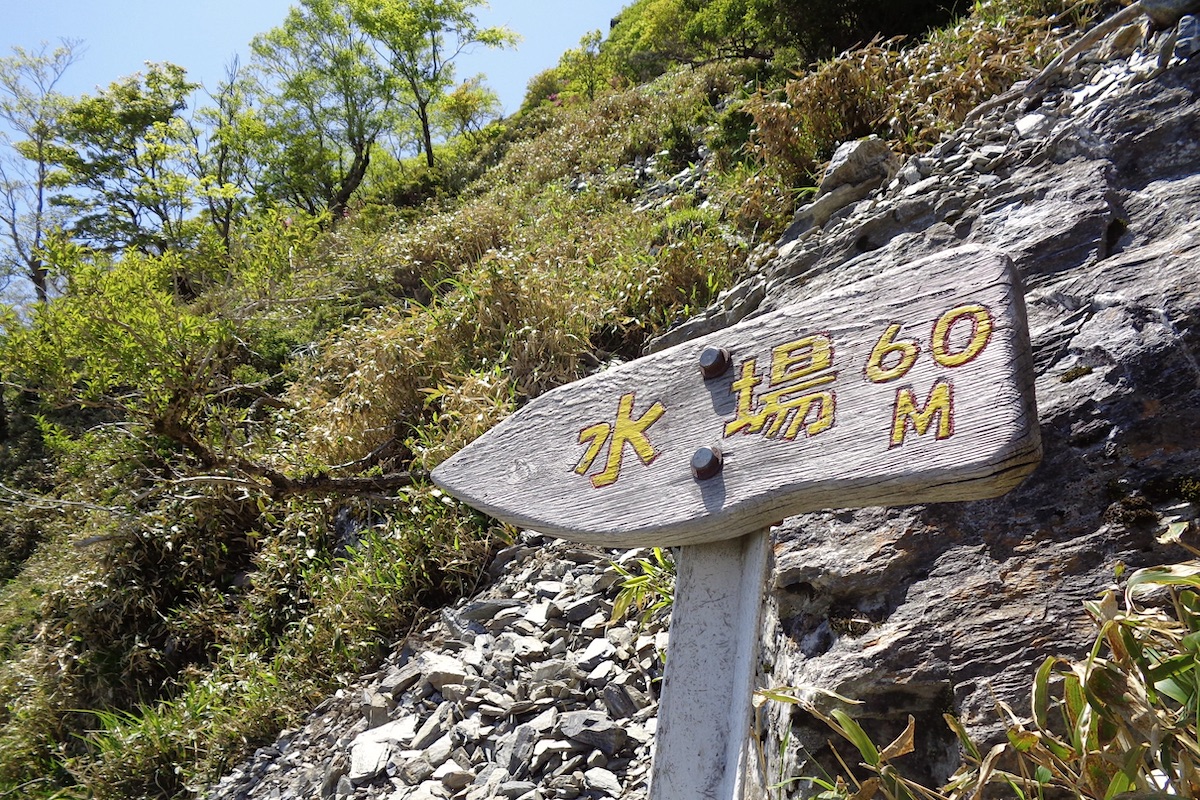 The final climb up to the summit area was a series of very high steps, and it took about 10 minutes to reach a trail junction that was right in front of a small pond. 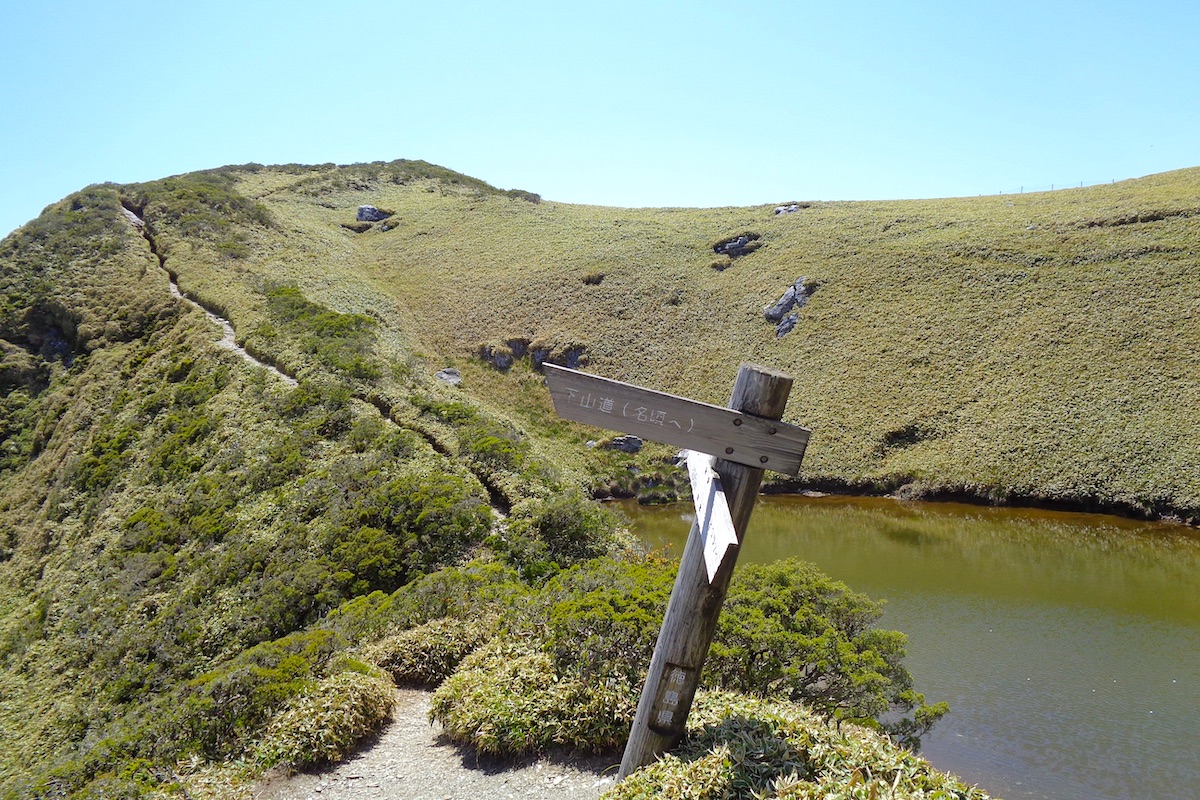 The actual summit of Mt Miune is another 10 minute climb to the left, but first I went to the right here to check on the Miune Hut.

For those who come on the second bus (as explained in Part 1), it is probably better to stay here for the night, which is perfectly fine since Miune Hut is wonderfully situated, offering views in every direction. 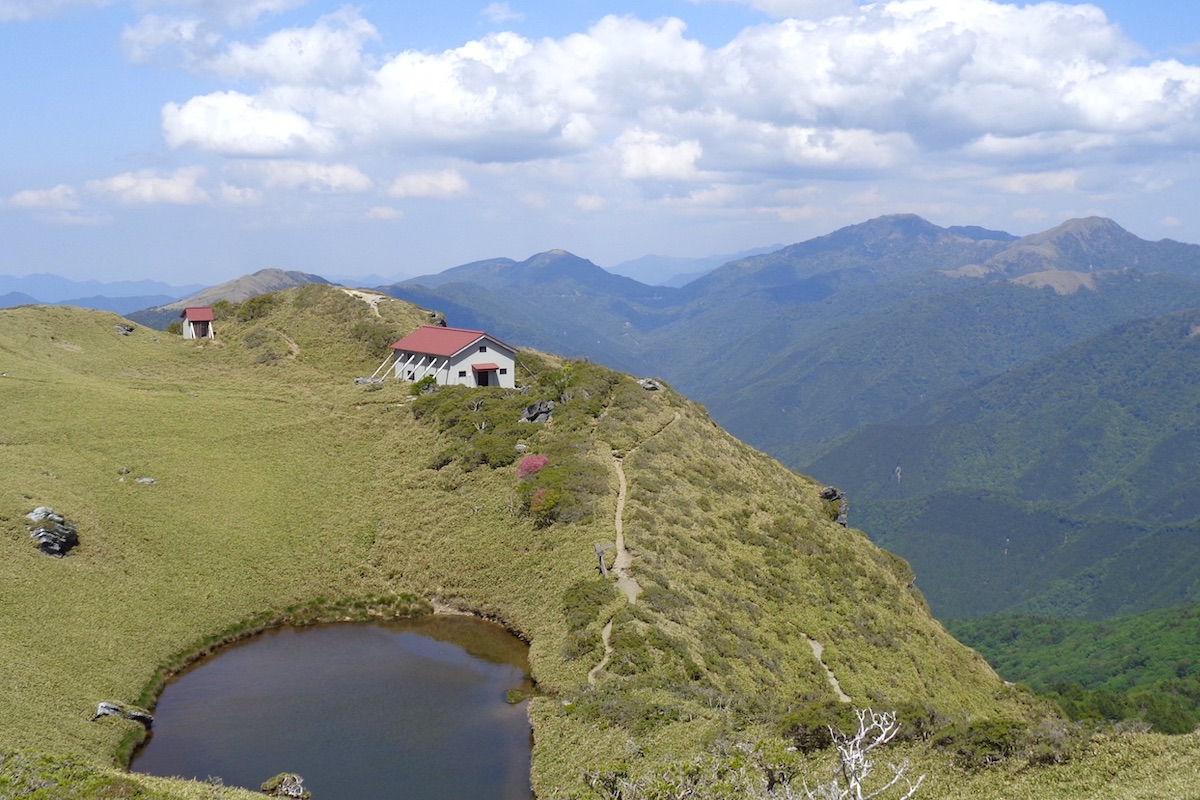 The hut is unstaffed and has no electric or water (you need to get all your water from the spring that was passed below. So if staying here, you probably want to fill up all your water as you approach). There is a pit toilet in a separate building behind the hut.

Inside, the spacious hut has two floors with enough room for about 40 to 50 hikers to sleep. You need to bring all of your own food as well as sleeping and cooking gear. 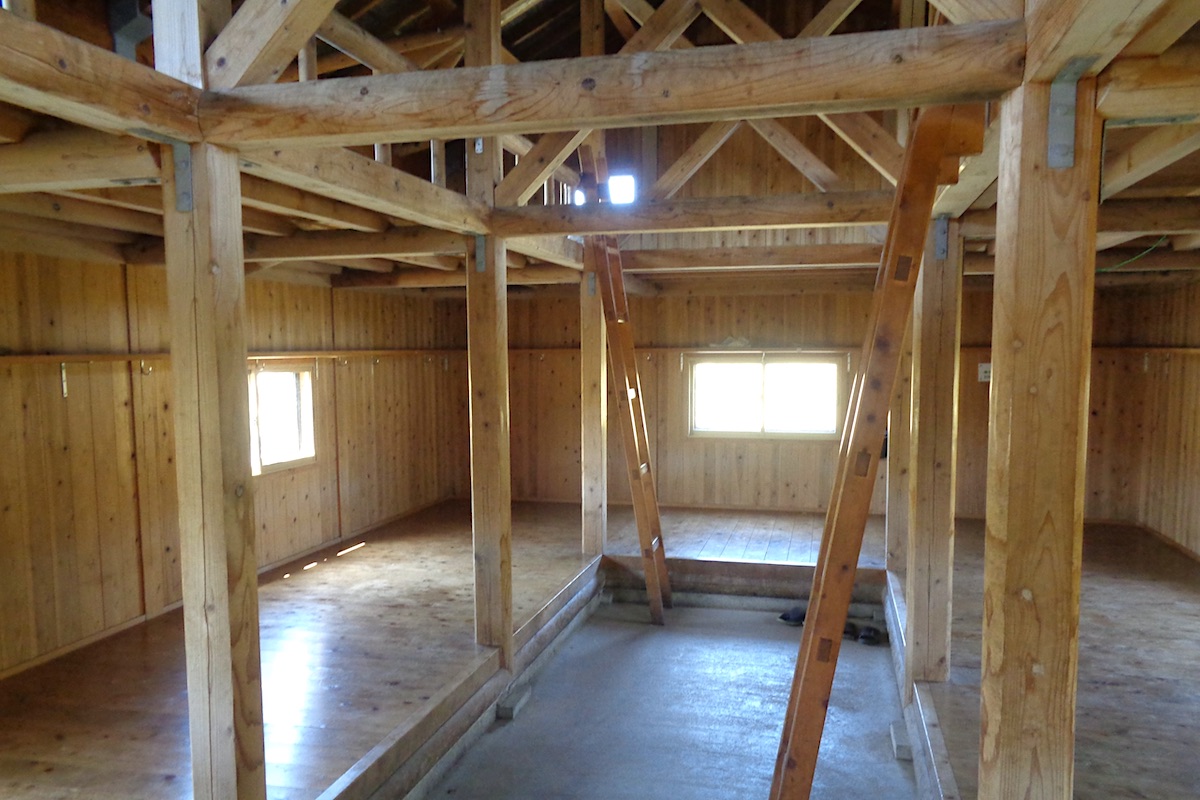 There are no reservations for staying, so space is on a first-come basis. Outside there is only a bit of space for a couple tents. **Camping elsewhere on the mountain is not allowed.

I took a walk around the lake and passed a few other hikers. I then made the final climb up to the top, and a few minutes later, I was rewarded with the 360 degree views of the summit.

After a thousand meters of ascent, I refreshingly took in the view from the 1894m top. To the east the ridge-line followed out to Mt Jirogyu and Mt Tsurugi. 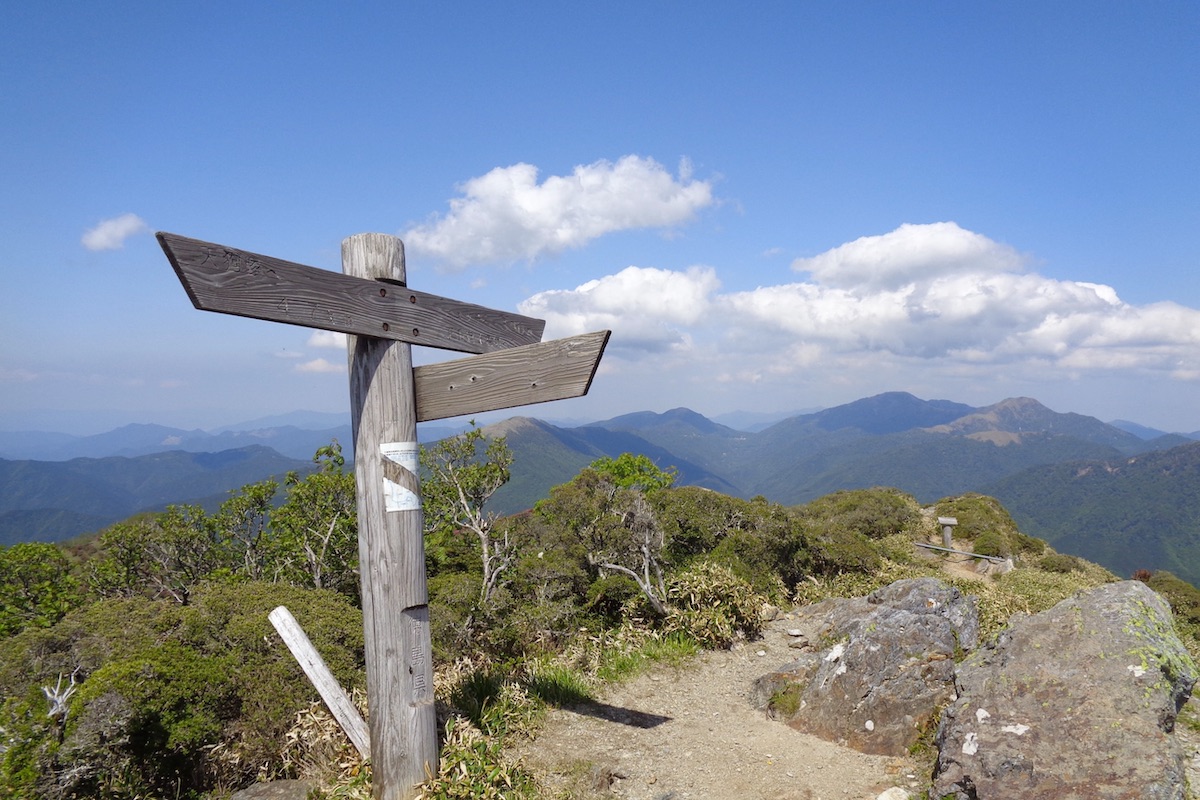 And to the west the ridge led over to neighboring Mt Nishikuma, which was the next destination for the day, and further beyond peeking out behind it, was the distinct pyramid-shaped top of Mt Tenguzuka, which would be the destination for tomorrow. 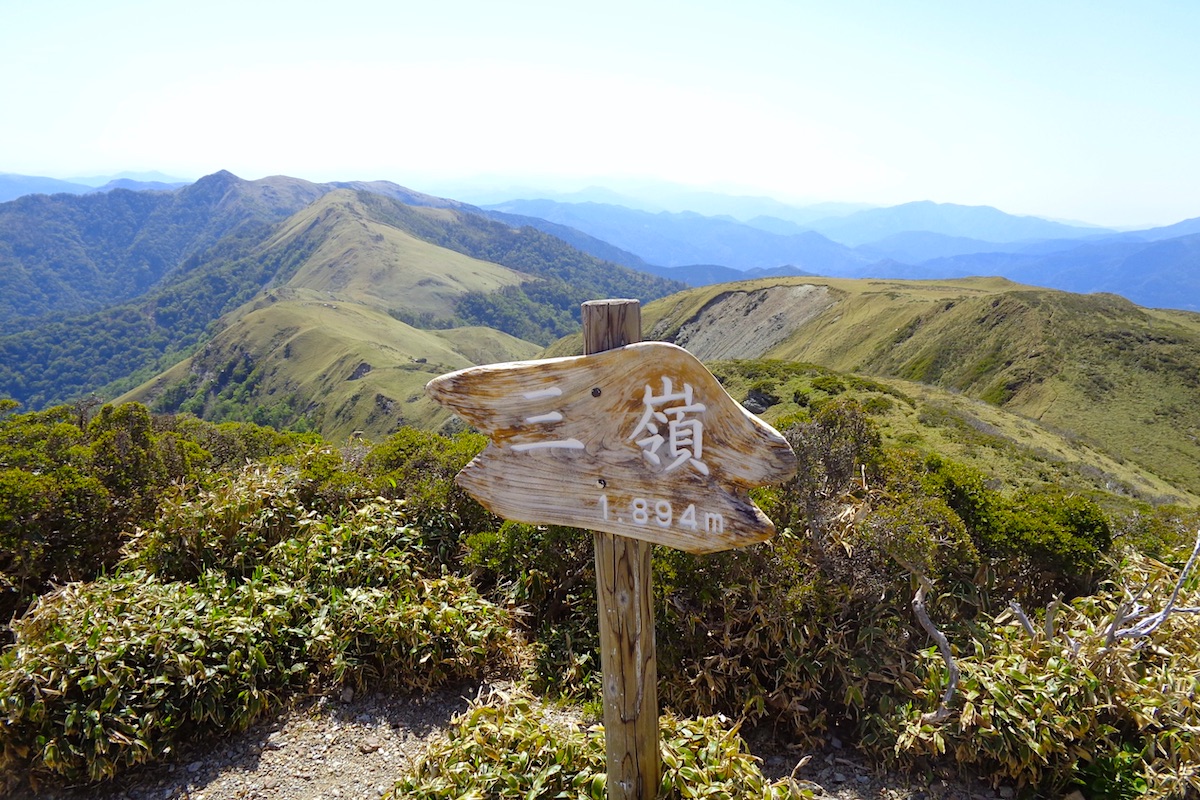 In Part 3, I head over to Mt Nishikuma and Okameiwa Hut.

For more info about this trail, including interactive maps in English, check the Mt Miune page on the IyaTime website: