The remote Iya Valley of Tokushima’s Miyoshi City is full of some of the best mountain hiking trails in Shikoku. In this multi-part series, we detail an intermediate yet challenging two day trekking route full of magnificent views that is accessible by public bus, with an overnight in one of the serene mountain-ridge huts.

While the famed Mt Tsurugi (1955 m) in Tokushima Prefecture’s Miyoshi City may be the highest mountain of the area as well as the second highest in western Japan, it certainly does not sit alone within the central Shikoku mountains. And though the beloved Tsurugi attracts a fair amount of hikers, the neighboring mountains heading westward along the Iya Valley’s rugged South Ridge offer equal or even better views, well maintained trails, and much more tranquil isolation. 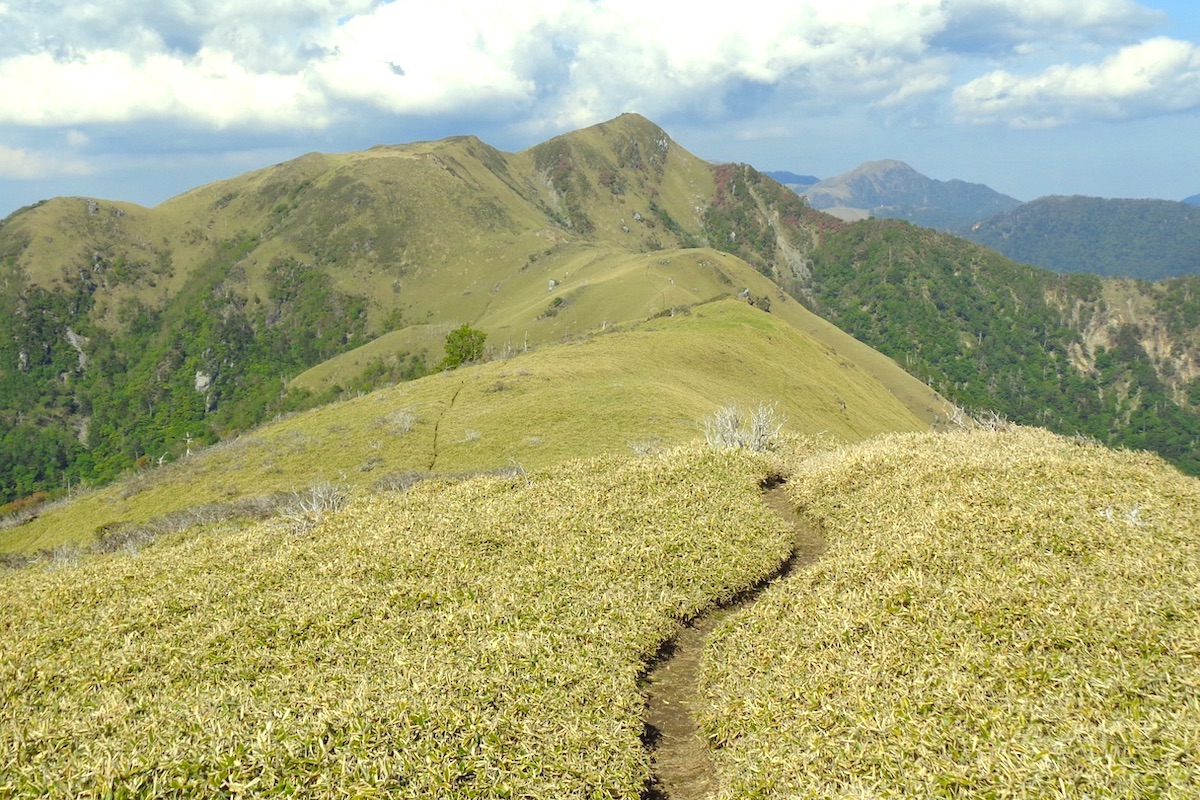 This article series follows the panoramic Iya South Ridge Trail between two nearby mountains within Tsurugi Quasi-National Park: Mt Miune (1894m) and Mt Tenguzuka (1812m) with a night spent in between at the unstaffed Okameiwa Hut. This course is readily doable for intermediate level hikers with proper gear for hut camping, but it is probably not suitable for beginner hikers.

Accessing the Trailhead by Bus

*Note, the bus times explained here may change in the future, so please check with the bus schedules again before you go. It is also understood that there may be a notable schedule and route change for Iya Valley buses in 2024 or 2025.

The starting point for this hiking route is Miune Trailhead, which is located in the deep Iya Valley village of Nagoro. Accessible by daily bus from either Ikeda Town in central Miyoshi City (for JR Awa-Ikeda Station) or from the somewhat closer JR Oboke Station along the way, the small hamlet of Nagoro is more renowned within Japan as being the “Scarecrow Village” due to being inhabited by hundreds of life-sized dolls. 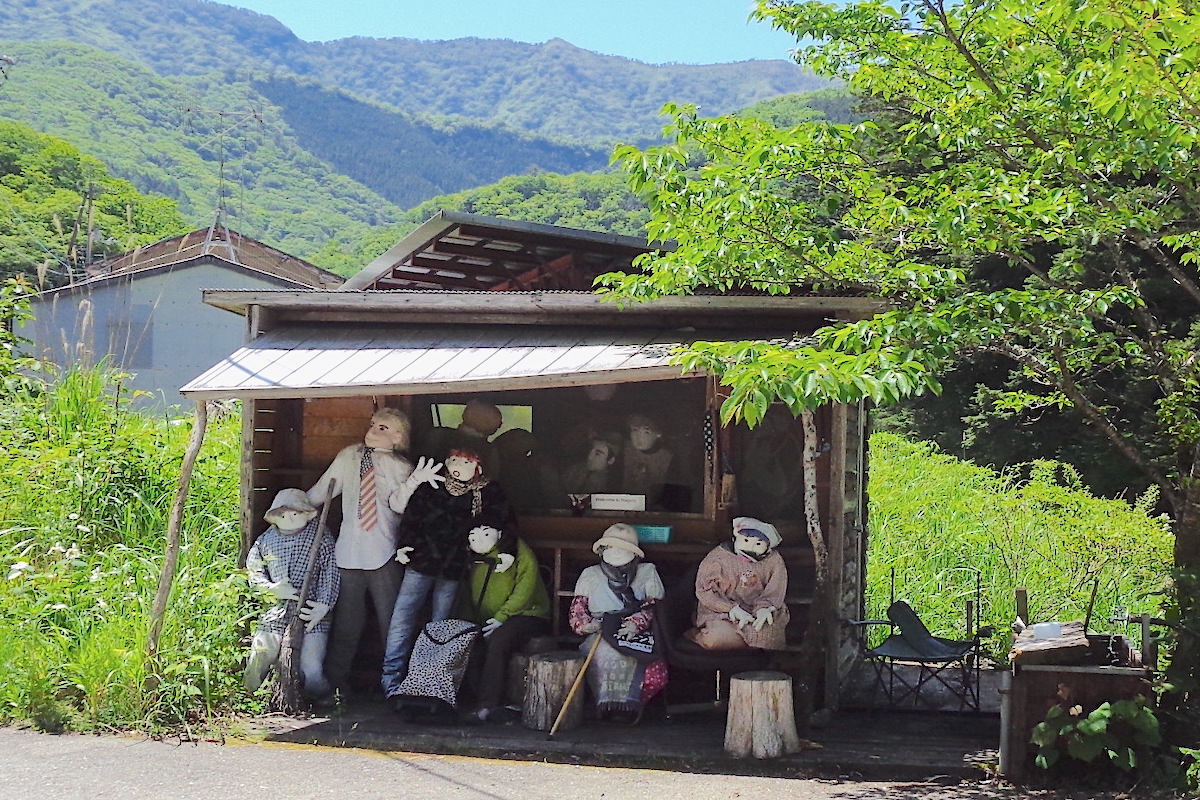 There are four buses per day which go between Ikeda/Oboke and the deeper part of the Iya Valley, but only the first two daily buses arrive early enough to be able to successfully hike up to the mountain huts before dark. Also, there are two mountain huts along the way to stay in, and this article describes staying at the further Okameiwa Hut, but it is only accessible by taking the first bus of the day (so if coming on the second bus, you would probably need to stay at the closer yet lovely Miune Hut. It is also briefly described in this article).

If entering Miyoshi City via Ikeda Town, the first two daily Shikoku Kotsu Buses into the Iya Valley depart from the Awa-Ikeda Bus Terminal at 8:15AM and 11:25AM. 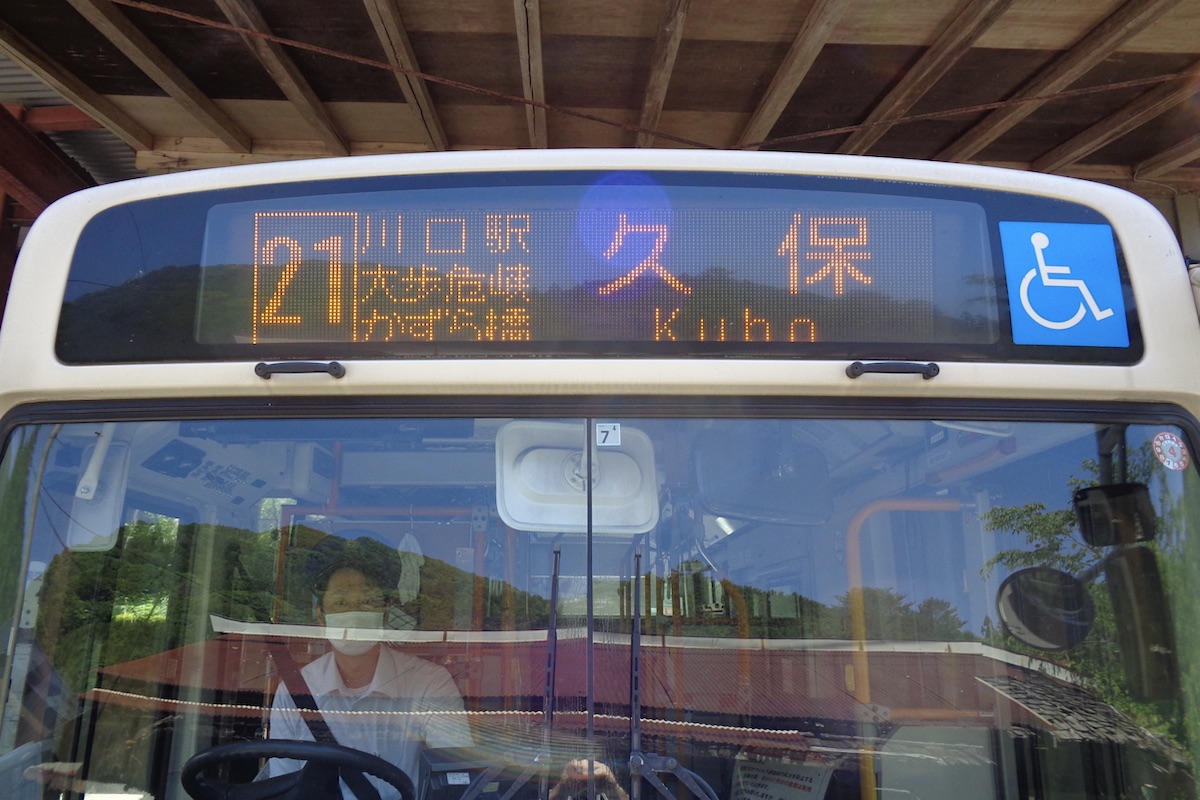 At Kubo, you will need to transfer to the local Miyoshi Municipal Bus (on weekdays it is often a large van) to head further to Nagoro.

(Note: Kubo is actually the endpoint for this 2 day hiking route, so you will be returning to here the following day to take the bus out. There are a new set of public toilets located here, but not much else other than a few houses. The departure buses are described in the final part of this series). 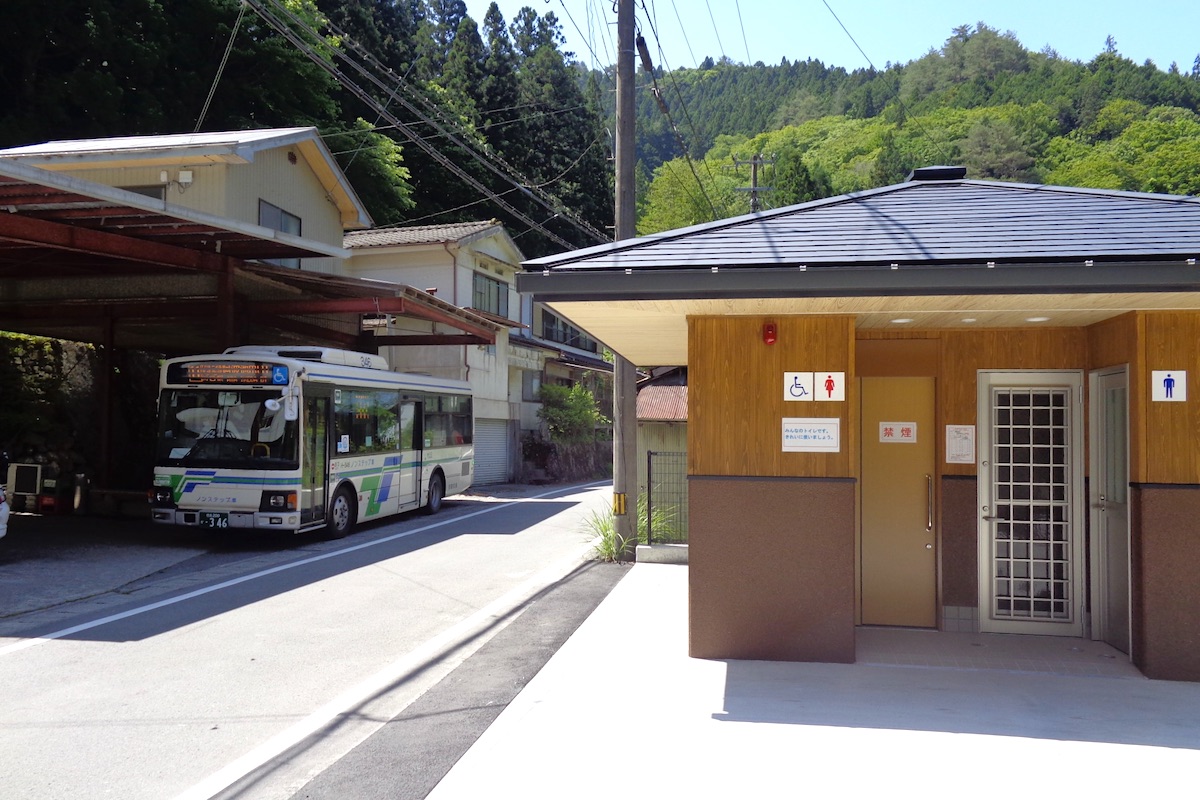 Other than some public toilets and a lot of scarecrow dolls, there are no other facilities or stores at Nagoro, so be sure to bring all you need. 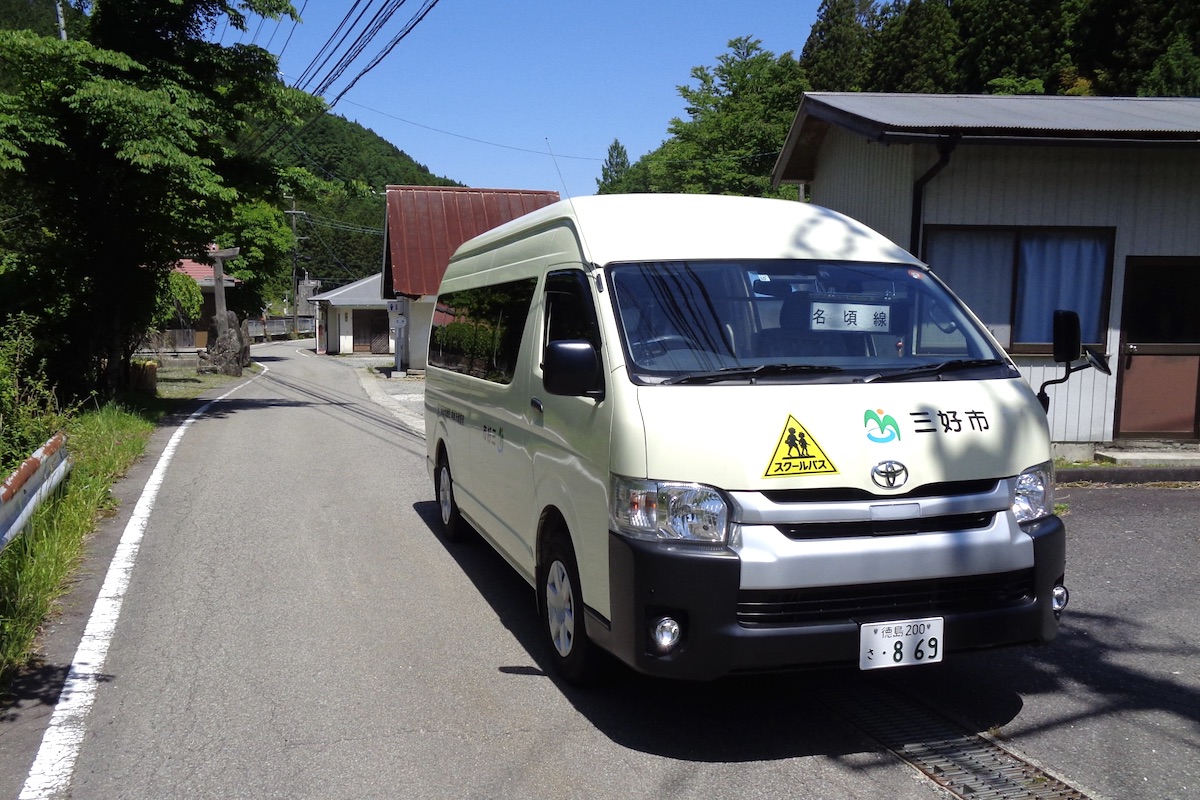 Once in Nagoro, walk about 100 meters up the road from the main bus stop and you will see a sign saying (in mis-spelled English) “Mimune Trail Head”. Follow this to the right over the bridge and past the trailhead parking area. 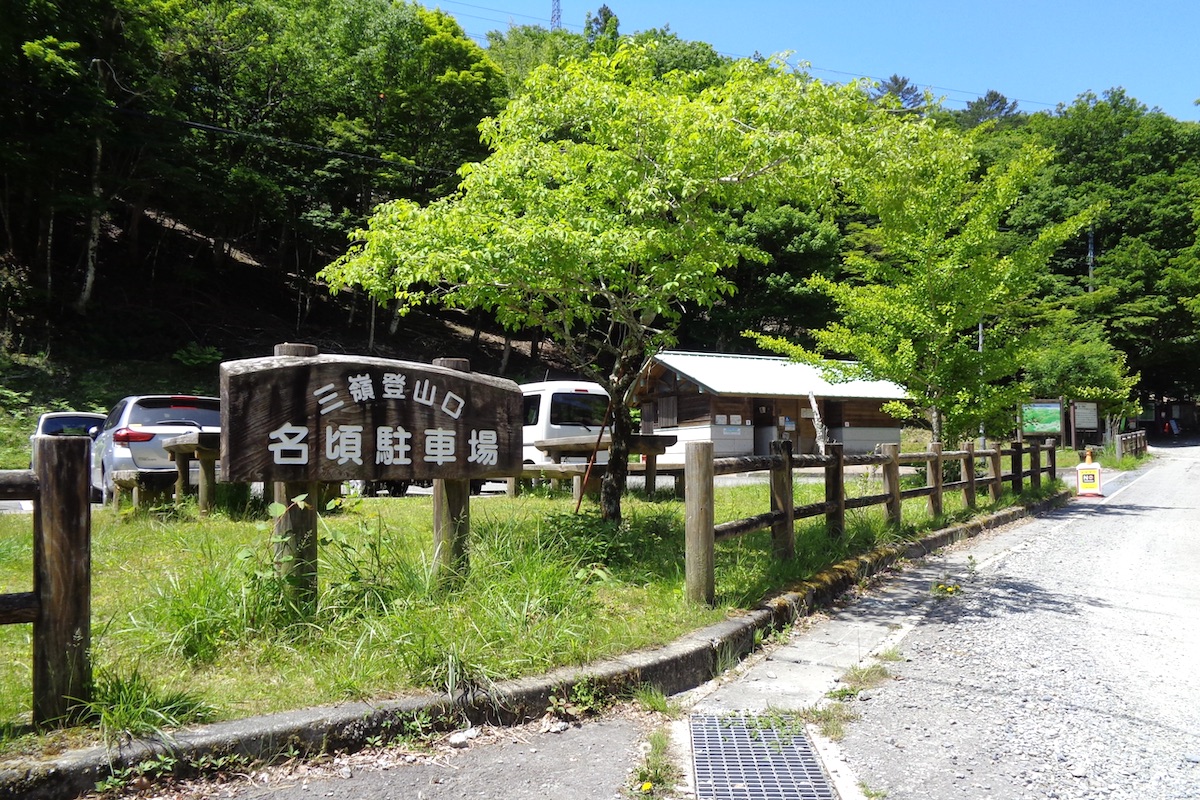 Located at an elevation of 915 meters, the trail starts to the right of the parking area just past the public toilets. However, as of time of writing this, there is a detour to the trail start due to some construction on the hillside here (but this construction may be finished by the time you go hiking).

From the main trailhead signs point to the detour starting point, which is a minute or two up the road from here. 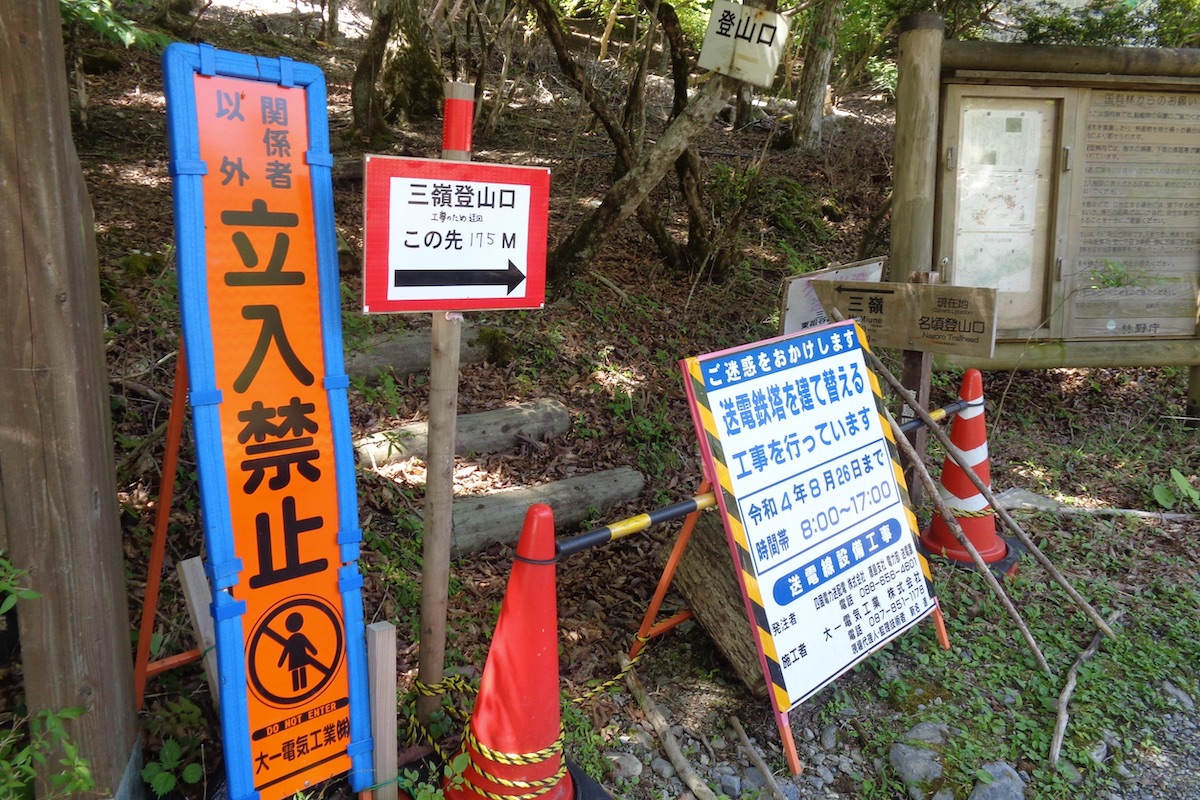 Be prepared for the conditions

The first section of the hike is by far the most difficult part of this whole route, and the steepness makes itself known almost immediately. It will be 3+ hours of constant uphill climbing until you reach the summit of Mt Miune, so be sure to bring enough to drink because the only water spring is located just below the top.

Though residents of Japan understand how hot and humid Japan can get in summer, many foreign visitors do not realize how sultry it can be, even out here in the lush mountains. Accordingly, I tend to sweat a lot when carrying a backpack uphill for so long, so having ample water is very important.

I did this hike in early June, which is before it gets too muggy, but if you choose to go later in the summer then be sure to pace yourself to avoid heat exhaustion, take ample breaks, and consider bringing some re-hydration drinks and energy snacks as well. 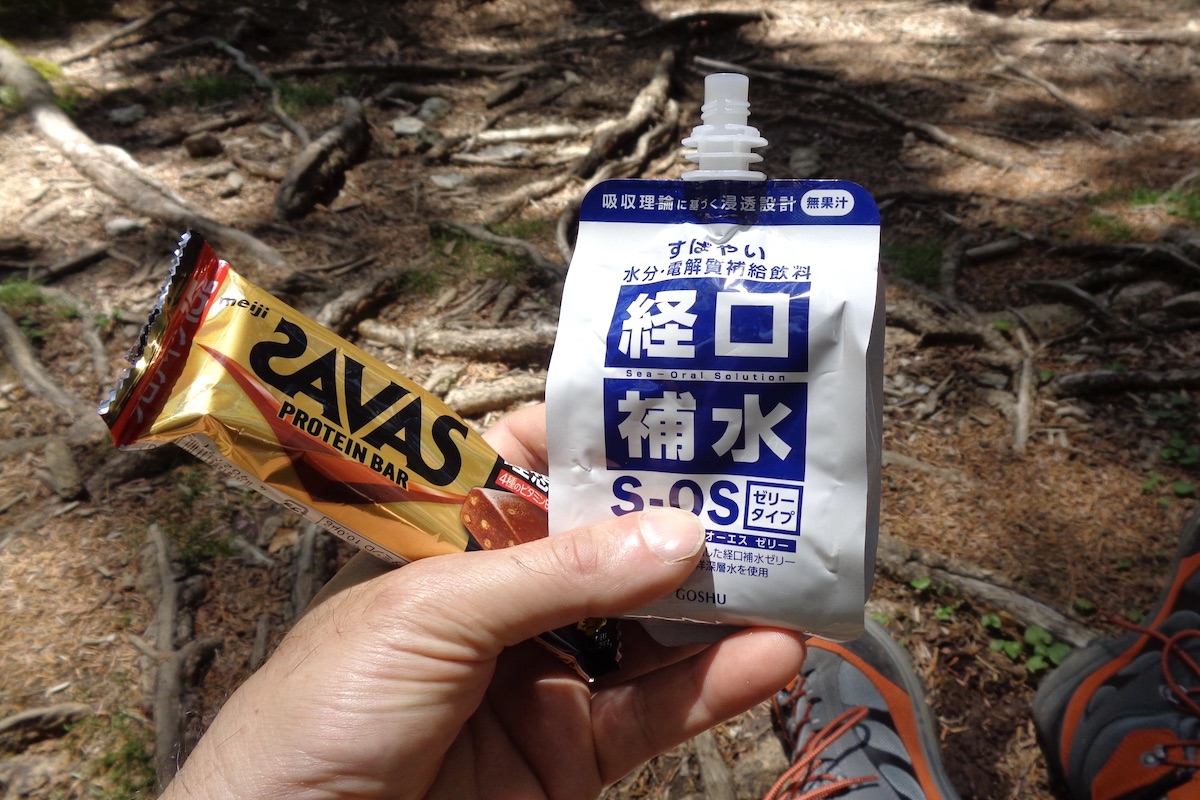 Furthermore, be sure to check the weather before departure. One of the best parts of this hike are the lofty views which can be easily spoiled by rain or thick clouds, so try to allow a flexible schedule if possible. And you absolutely do not want to hike during a typhoon. The winds can literally blow you off the mountain!

In Part 2, I will further detail the hike up Mt. Miune.

For more info about this trail, including interactive maps in English, check the Mt Miune page on the IyaTime website:

Bus schedules to Kubo and Nagoro in English can be found here: