For over a thousand years, every summer a divine “rain dance” has been held deep in the mountains of Tokushima Prefecture’s Miyoshi City. Performed for the first time in 3 years on July 23rd in the hidden Iya Valley, this ancient ritual involves both young and old residents and is recognized as a Nationally Important Folk Culture Asset.

A secluded shrine atop a 1000m mountain

After an initial performance of the Jindai-Odori dance at the base of Zentoku village, the brightly costumed performers and attendants all got into vehicles and set off for the main shrine.

Like all villages in the Iya Valley, people historically lived up in the hillsides, so it is up here where the valley’s ancients shrines tend to be located. The Tenmangu Shrine was no exception, and a small spur road branched steeply up from the main road, which then wove its way up through the neighborhood. 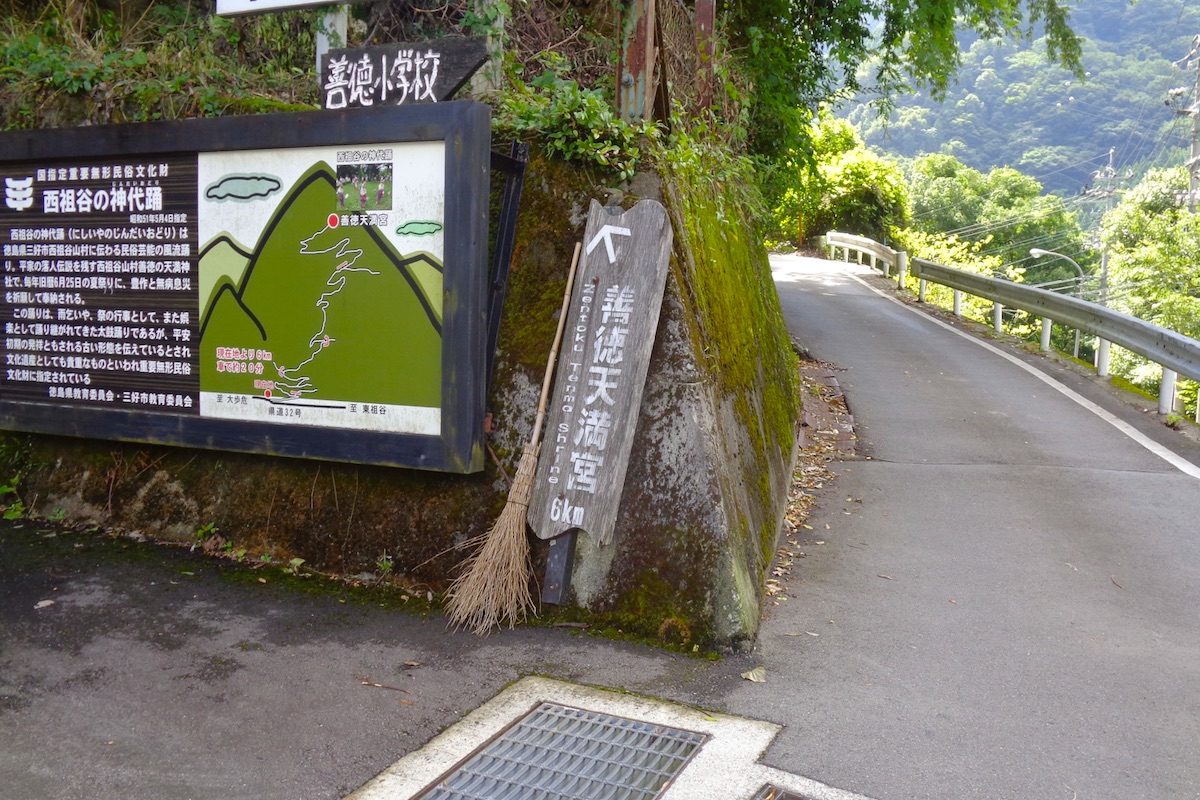 Gaining over 600 meters in elevation, it took about 20 minutes to drive the several kilometers of sharp, narrow curves to reach the mountaintop shrine.

Surrounded by thick forest, the 1033 meter high shrine held an atmosphere of veneration. Massive old-growth cedar trees stood guard around the perimeter, and the fresh, crisp air was noticeably cool despite it being mid-summer. And as the kaleidoscope of robed performers began to arrive, it felt as if I was stepping into a primordial realm. 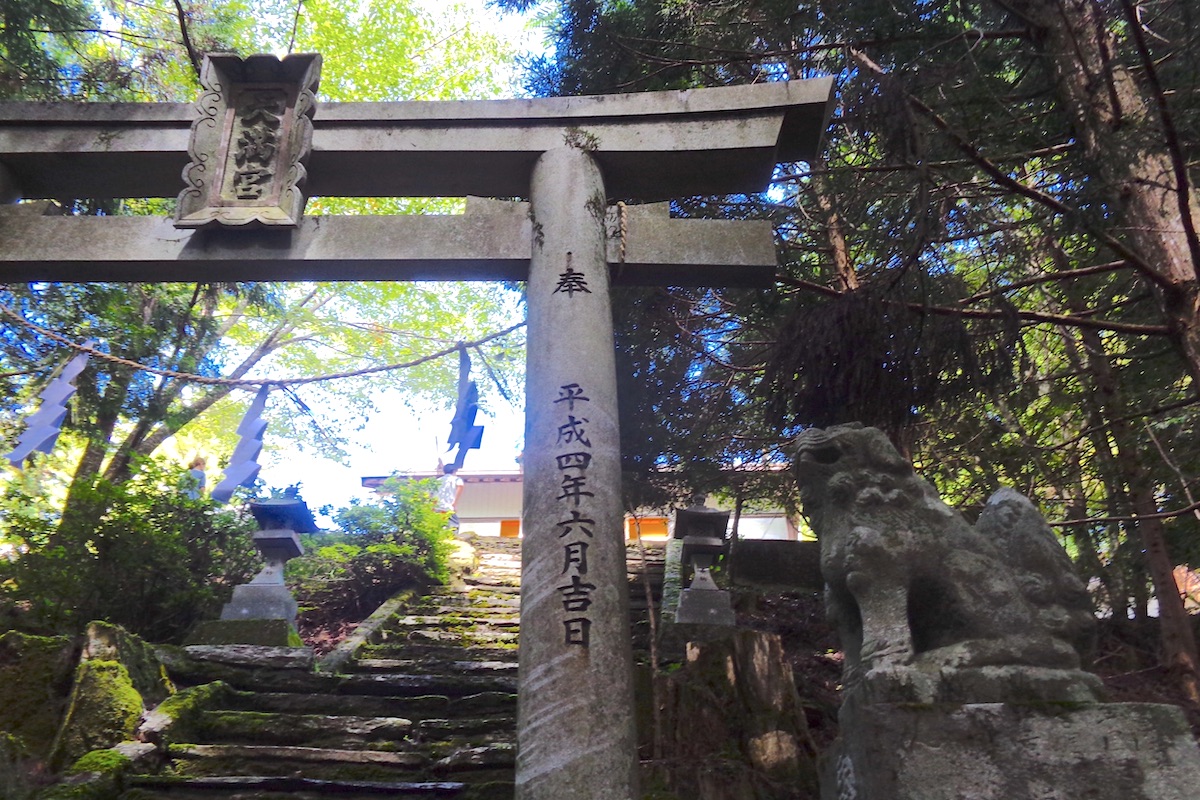 The first part of the event was a ceremony and blessing done at the Tenmangu Shrine. The shrine’s symbol is that of a multi-circle plum blossom, and similar plum markings adorned the costumes of the dancers. The plum blossom crest was that of the revered Sugawara-no Michizane, who was the originator of this dance 1100 years ago. 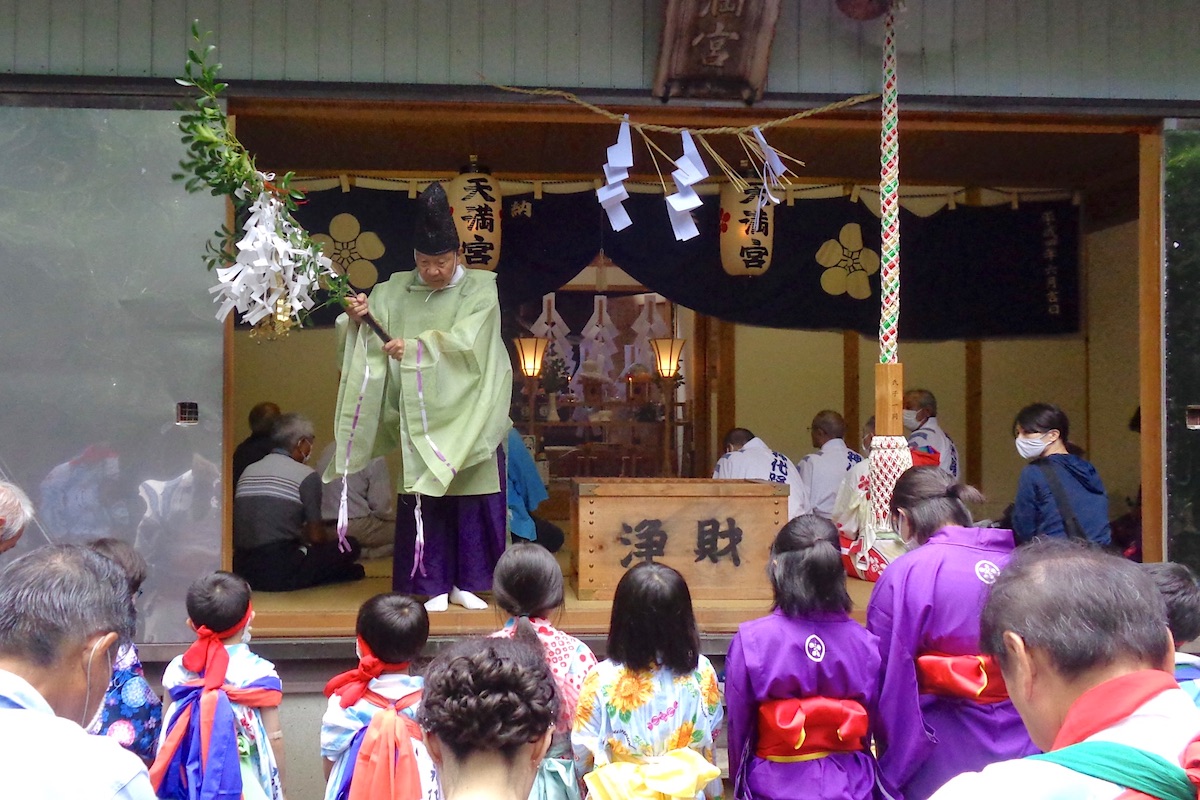 All the participants gathered in front of the shrine, and a Shinto priest chanted a prayer. This scene of costumed dancers assembled before this shrine, with heads bowed as they received a blessing, has probably changed very little over the previous twelve centuries. It was as if I was looking into the past.

Rhythms echo through the deep mountains

After the prayer ritual, the troupe moved over to an adjacent clearing within the dense forest to begin the dance. With a wail from a blown conch shell, the drums and gongs began their roaring cadence. 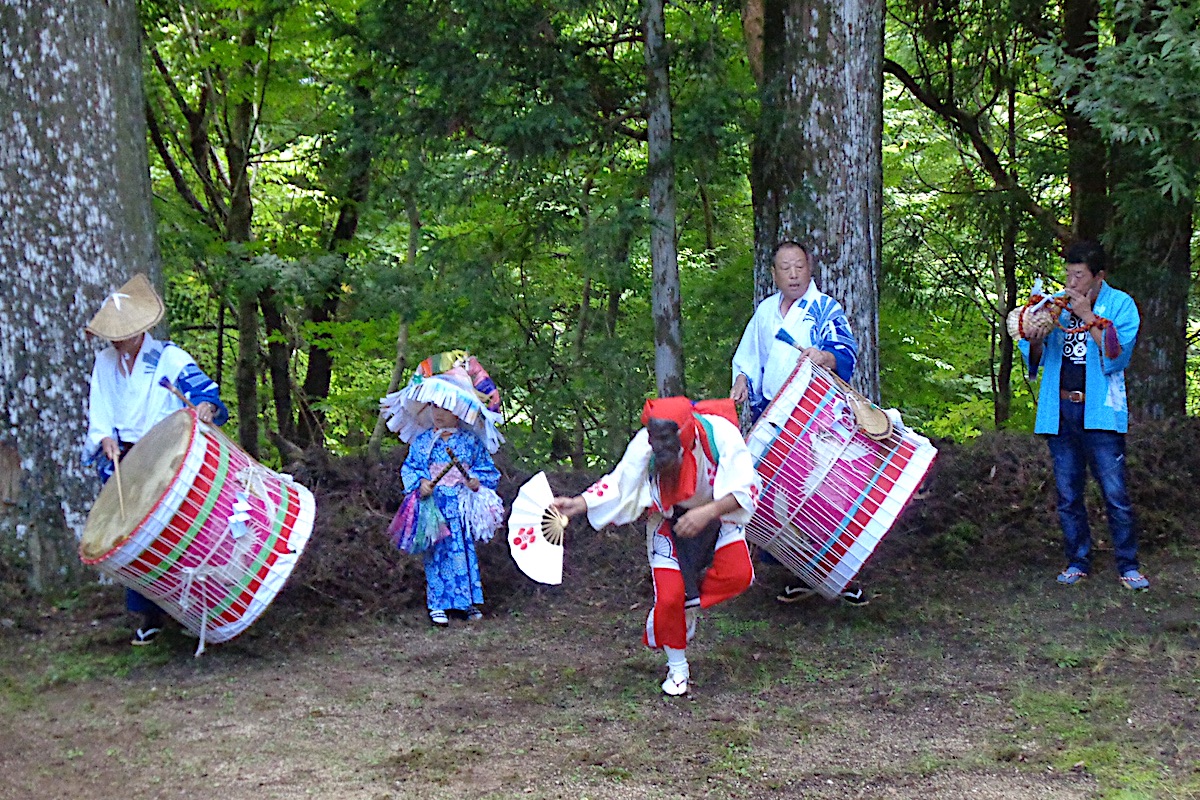 In unison, the dancers moved together in a large circle. There were several different styles of performers, including girls in colorful streaming hats, boys wielding batons, a costumed lion character, and a symbolic sandal collector. 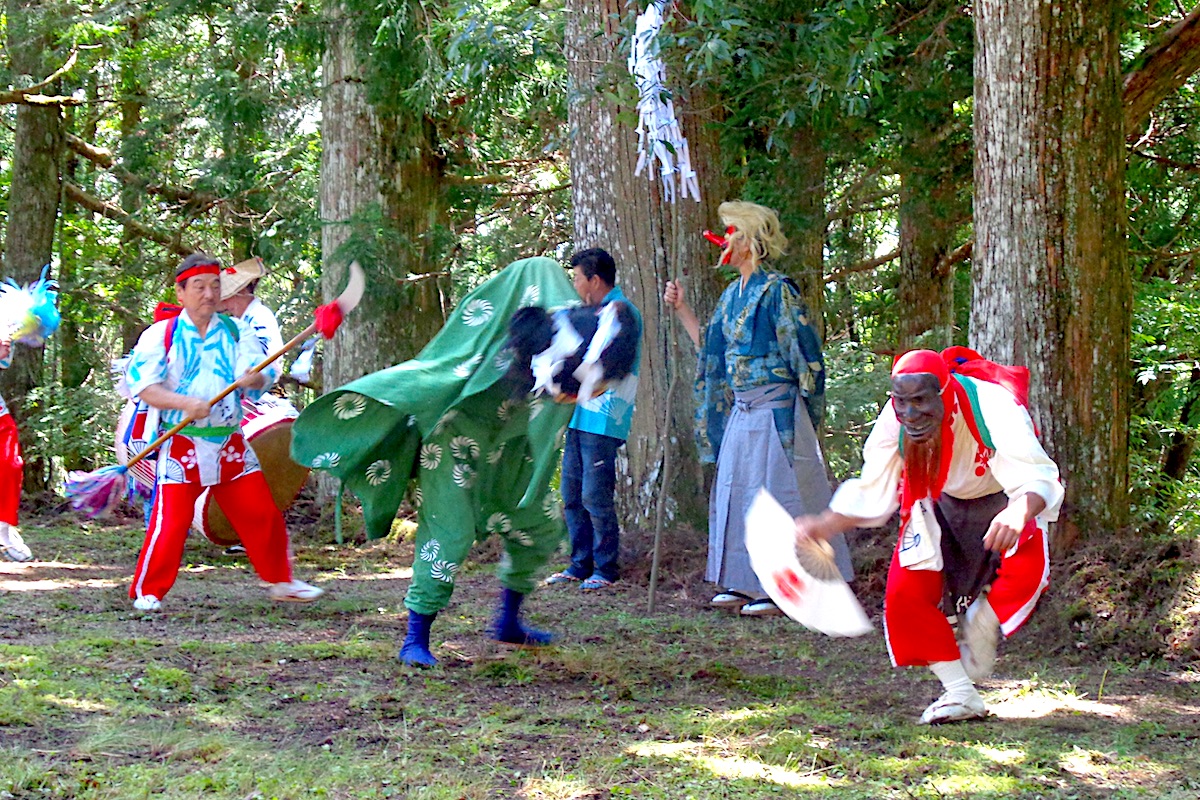 Leading the congregation as they rotated were two masked men. One was dressed as a red-faced “tengu”, which is a mythical creature with exaggerated features and usually considered to be a type of protective spirit. The other was a scowling “tsuyuharai”, who is a “dew sweeper” and leads sacred processions in order to prepare the path for those who follow. 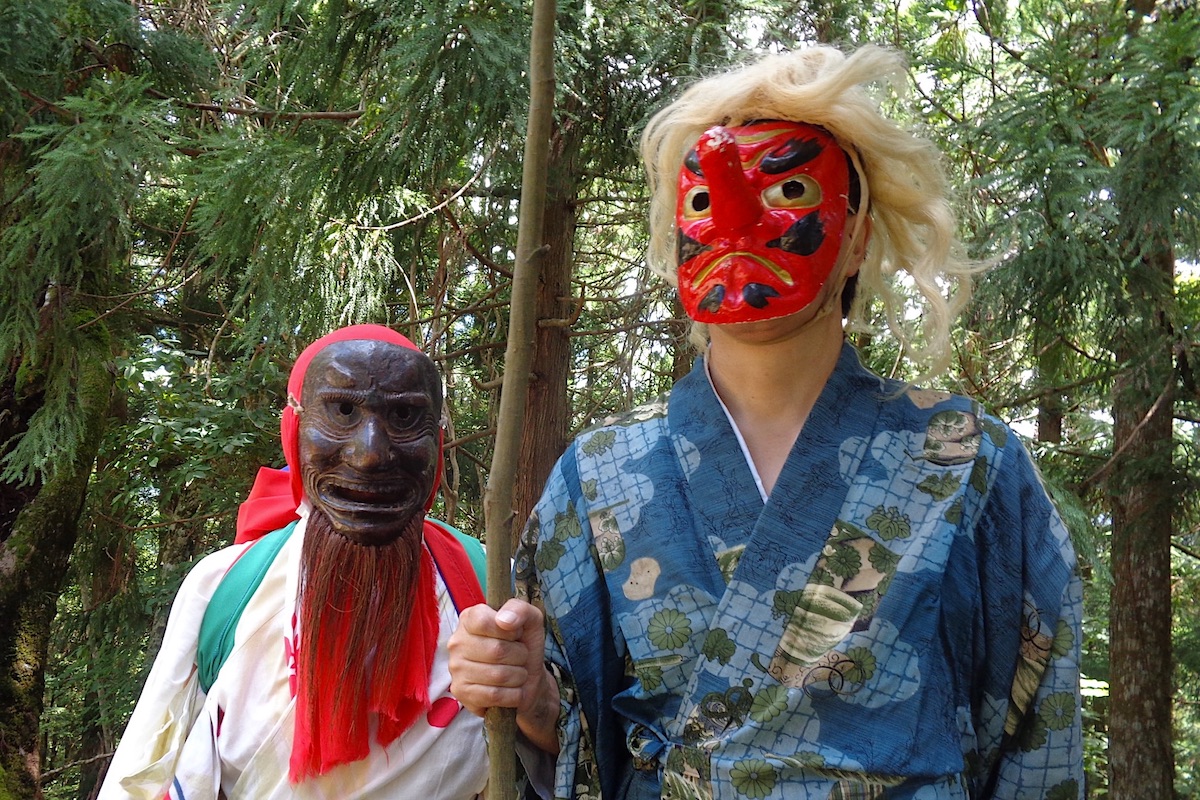 Multiple songs were played and the movements changed with each. And throughout the whole ritual, whenever there was a pause in the beat, the dancers chanted in unison “Sorya!”, which is a type of Japanese mantra often uttered during rhythmic performances.

The eternal contrasts of the Jindai-Odori

As the dancers rotated in their large circle amongst the towering cedar trees, the trance-like intensity was clearly felt by all who watched. The men and boys flailed their staffs as they powerfully jumped, while the women and girls more elegantly twisted and fluttered their fans in graceful synchronicity. 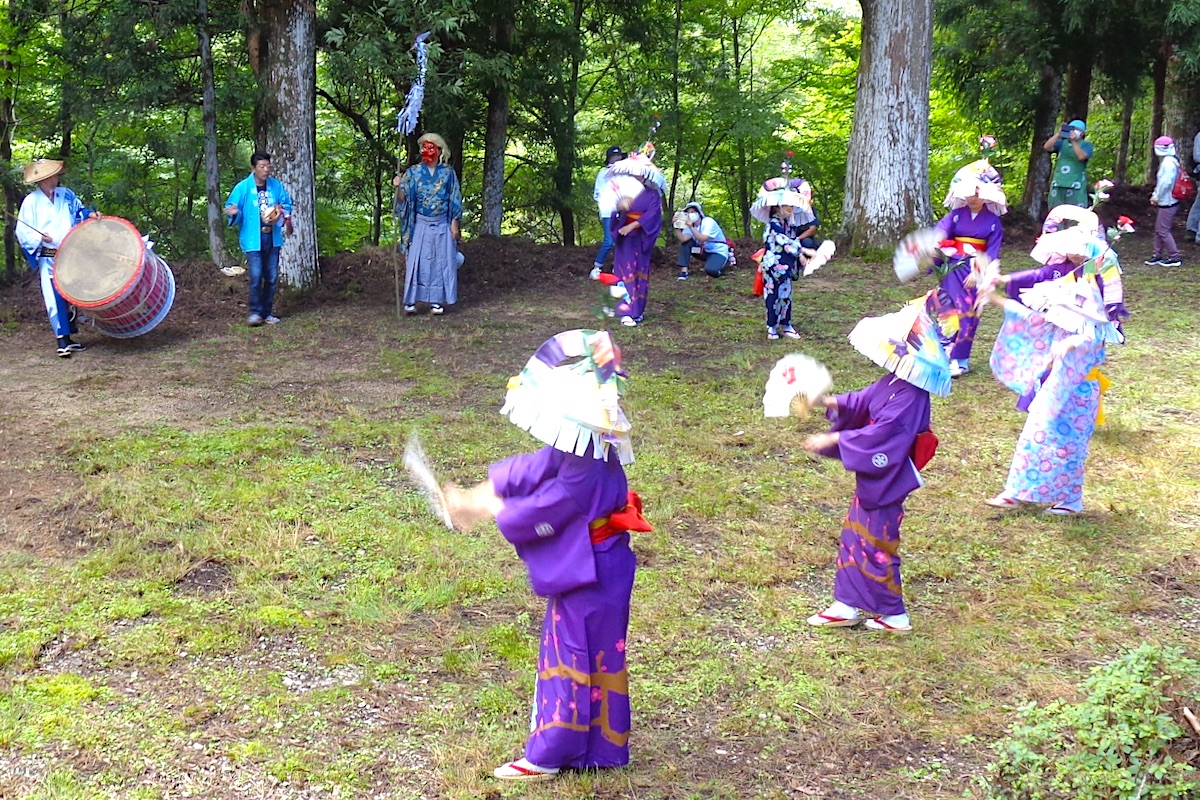 I remembered what one of the dancers told me earlier that morning down at the base of the village about the contrast of the colorful costumes upon the forest’s deep green landscape. Indeed, the lush surrounding made their movements all the more vivid. 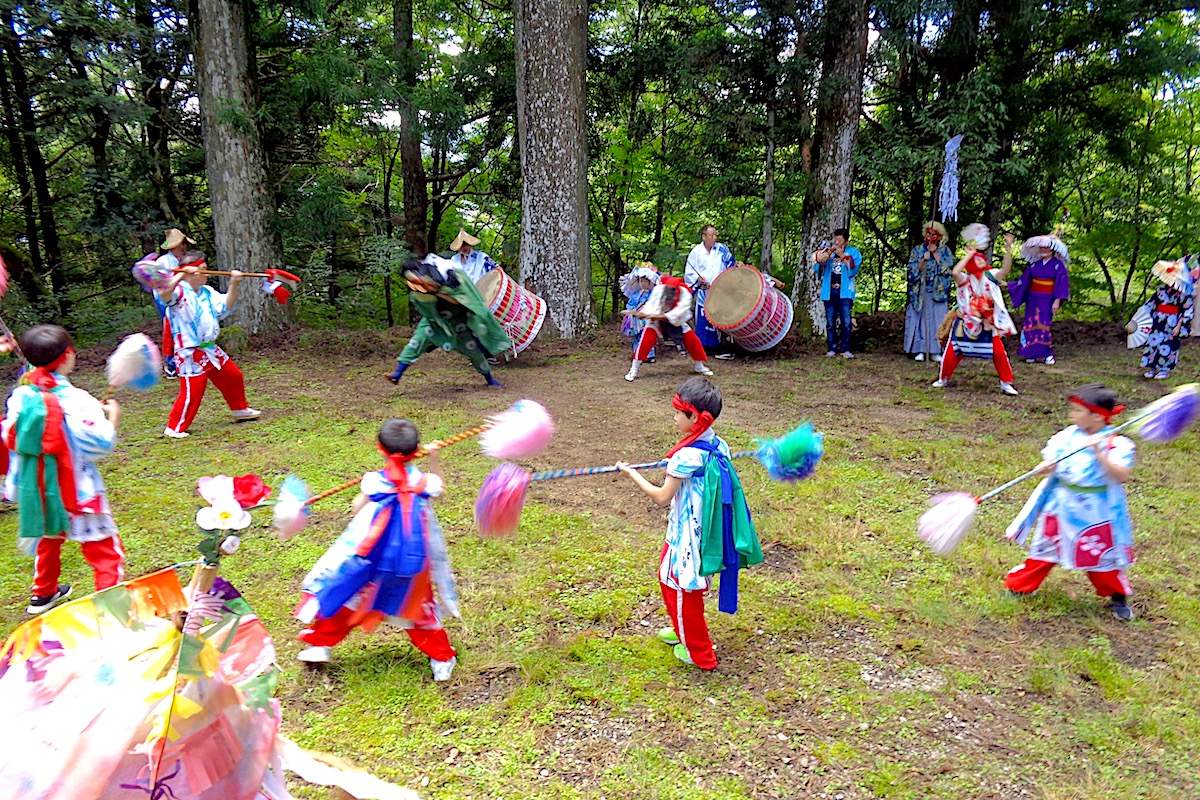 As I watched on at this timeless spectacle, the thunder of drums reverberating through the silent forest, the technicolor robes upon the verdant backdrop, the secluded mountaintop location high above the village… it felt as if I was somewhere between heaven and earth.

In Part 3 we find out more about this historic dance and the local people who make it happen.

Held annually on the 25th day of the 6th Lunar month according to the old Japanese calendar (aka Chinese calendar). In 2023, it will be August 11th. The costume preparation and initial performance takes place starting from about 8:00am at the bottom of Zentoku village in Nishi-Iya, not far from the main Kazurabashi Vine Bridge. At about 10:00am the main ritual and performance is held at the Zentoku Tenmangu Shrine at the top of the mountain.