Deep in the mountains of Tokushima Prefecture’s Miyoshi City, the people of the remote Iya Valley have been performing a traditional “rain dance” each summer for over a thousand years. Recently held on July 23rd for the first time in 3 years, both young and old residents took part in this nationally recognized Important Folk Culture Asset.

The unique traditions of a secluded valley called Iya

Miyoshi City’s Iya Valley is renowned for being a hidden place. With its ancient vine bridges, remote hillside villages, and links to fugitive samurai warriors, many legends and relics have made their mark in this historically isolated land.

And among the traditions passed down through the generations, perhaps one of the oldest is the Jindai-Odori dance, which (due to the coronavirus) was recently held for the first time in three years. 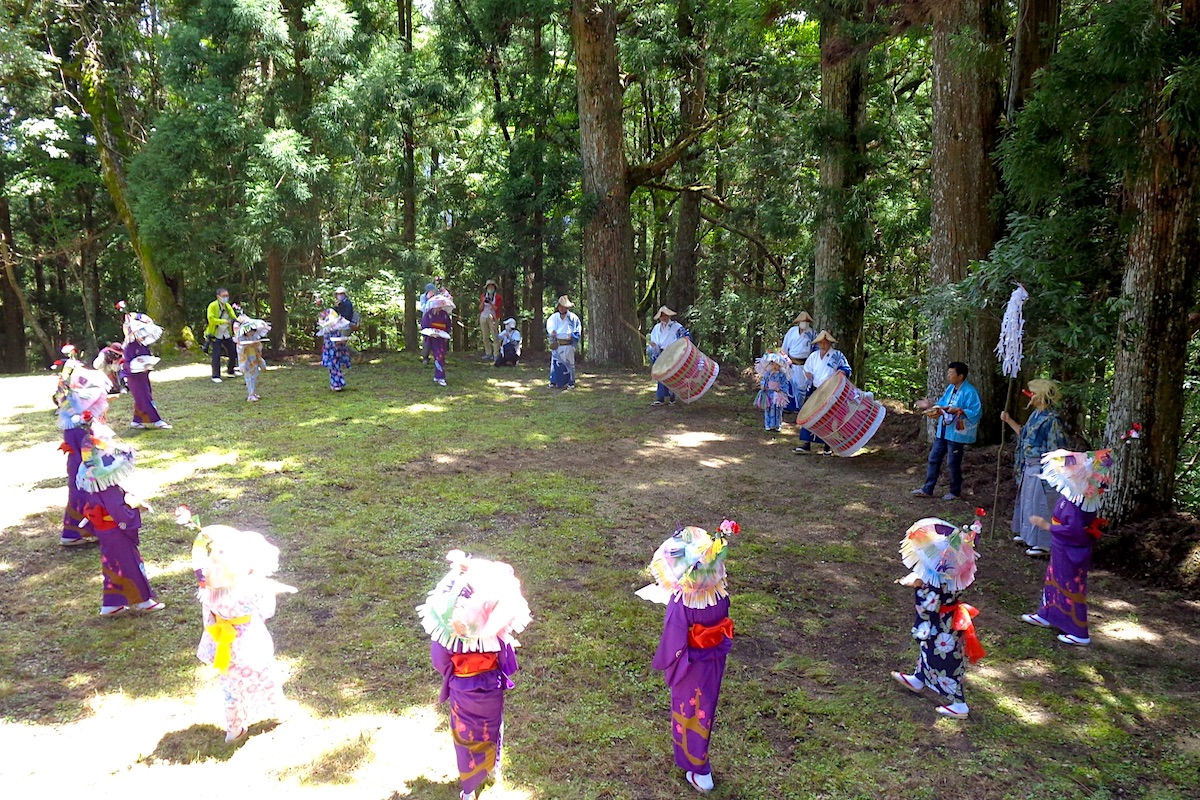 Accordingly, many local people came out on the day of the festival to welcome back this timeless custom.

At about 8am on July 23rd, the usually sedate Nishi-Iya (West Iya) village of Zentoku was bustling with activity. Residents of various ages had gathered at a small public building along the main road here to change into their dancing costumes. 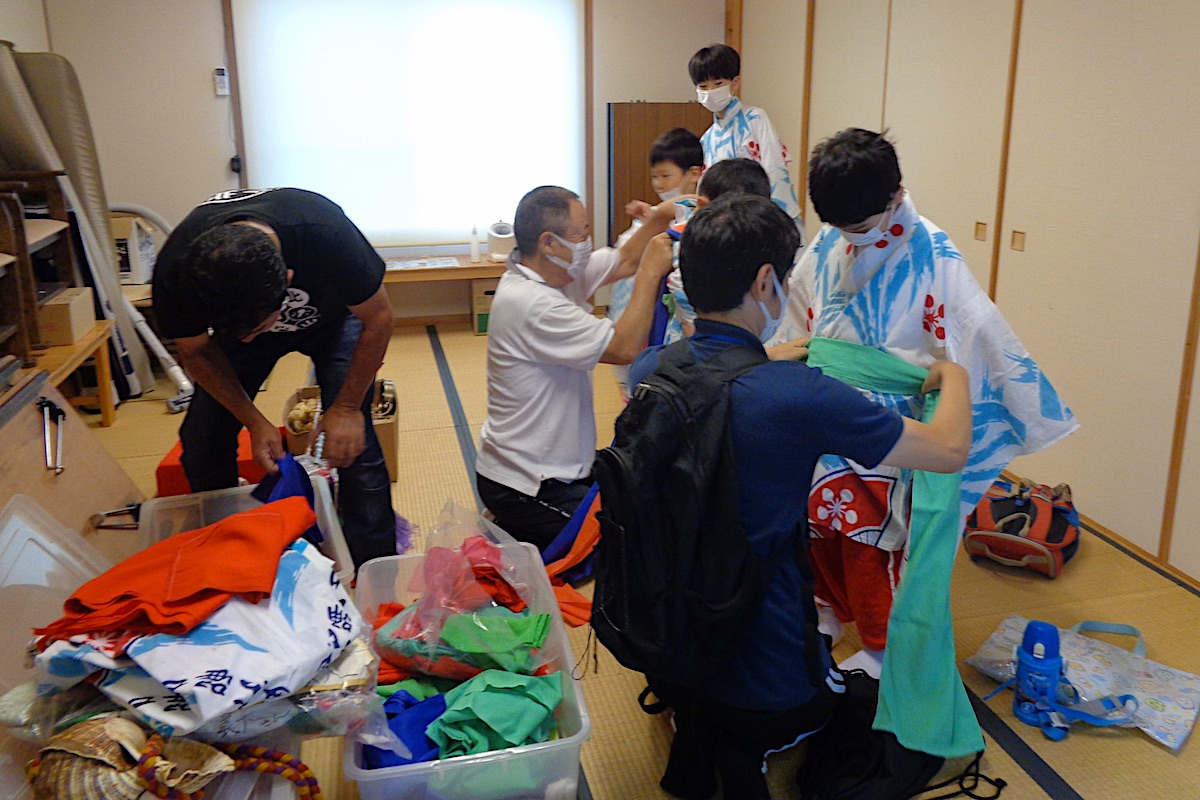 The head of the Zentoku Jindai-Odori Preservation Society, Takeo Onodera, brought out the sacred conch shell which was to be blown during the ritual like a horn. 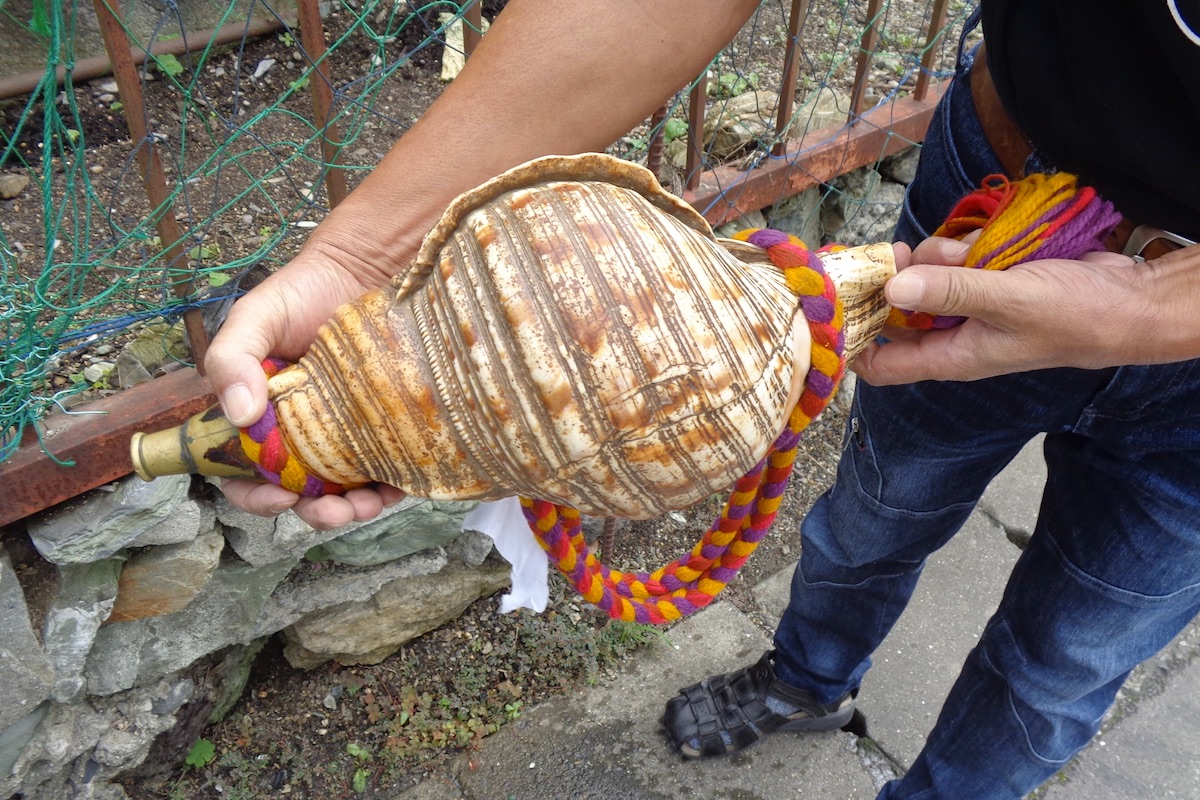 Though the festival this year was held on July 23, the date changes annually due to being based on the old Japanese lunar calendar (also known as the Chinese calendar). The actual date for the event is the 25th day of the 6th lunar month on the old calendar (which in 2023 this will be August 11th).

The colorful costumes of this time-honored dance

One by one the dancers came out of the building adorned in their bright kimono and elaborate headdresses. Since it has been 3 years since the previous event, for several children it would be their first time performing. Proud parents gathered to photograph their kids as they emerged and shouted “So pretty!”, which made many of the children blush. 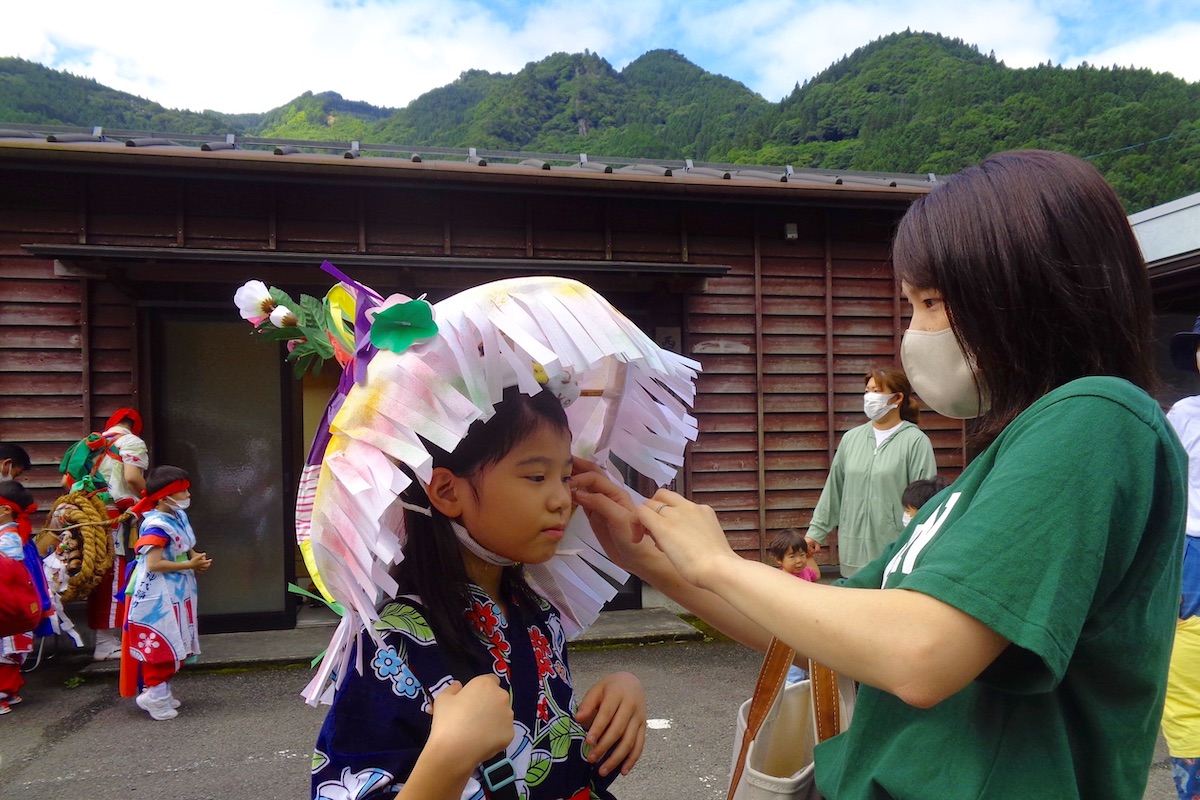 I asked some of the older participants about their unique attire and was told, “Once we go up to the shrine, these colorful costumes will look so vivid against the deep green scenery of the forest.” 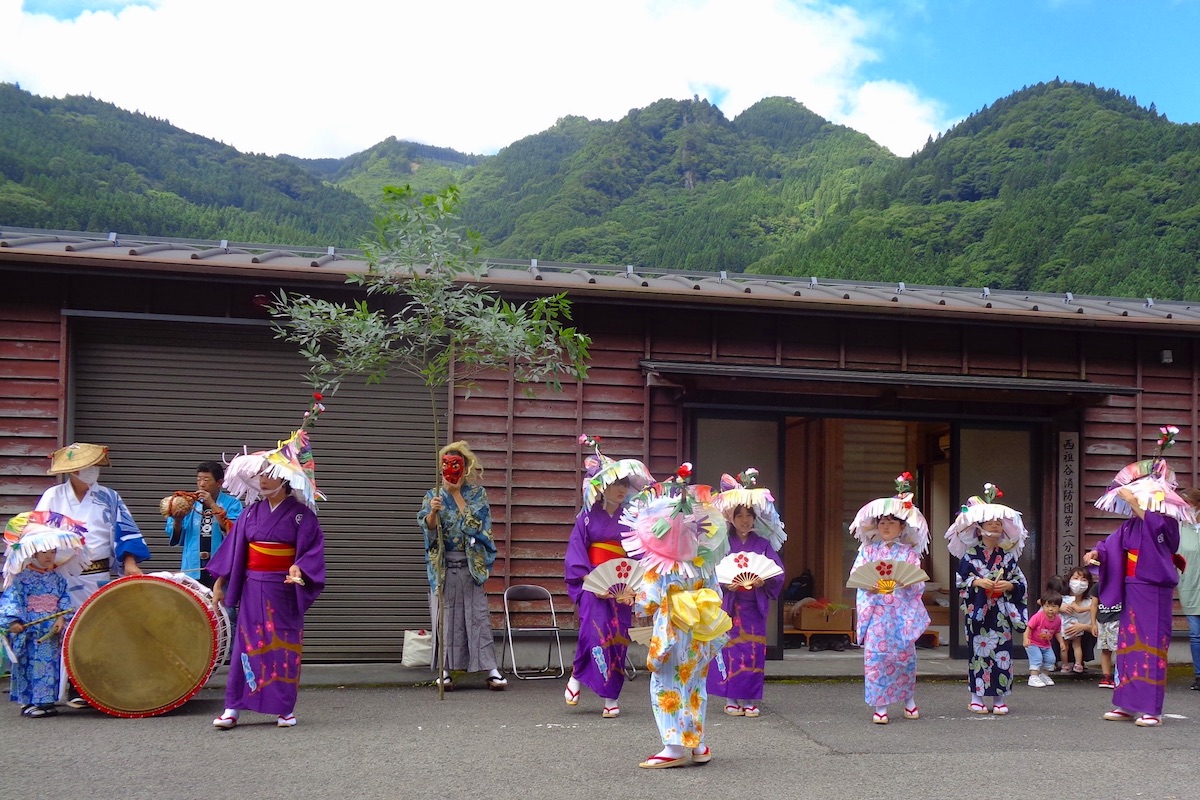 It made me more excited in anticipation of the main festival, but first they would do an initial performance down here.

At the cue of a howling conch shell, a roar of drums and gongs began, and the assembled performers began their dance in a large circle. Though we were only in a small parking area, the air was full of excitement and energy. 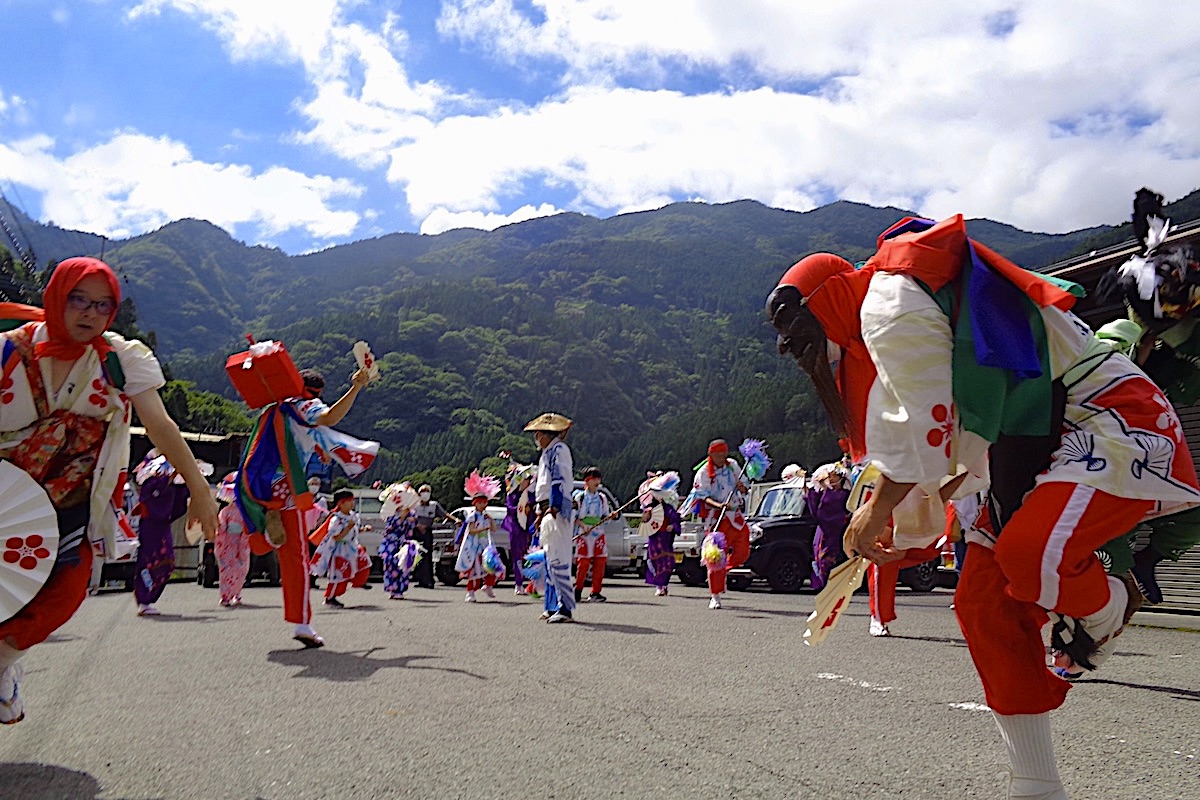 Historically, this dance would usually be performed in two locations. The second site is at the Tenmangu Shrine, which is where we would all be going later in this morning. But the first performance would traditionally rotate each year, and be held at a different family’s house each time. However, due to the difficulty involved with households hosting the event, it was agree about a decade ago that this initial performance would be collectively held at the base of the village instead.

The origins of this ancient ritual dance

In the late 9th century, the revered poet and scholar Sugawara-no Michizane was the governor of Sanuki (now known as Kagawa Prefecture, just north of Miyoshi City.) The area was experiencing a severe drought in the year 888, so Sugawara retreated to the mountains (near the border of Miyoshi) and in veneration to both Shinto and Buddhist spirits, he performed a special rain dance.

Observers took note of his divine dance, and to further help alleviate the drought, they spread the ritual all throughout the region, including into the Iya Valley. 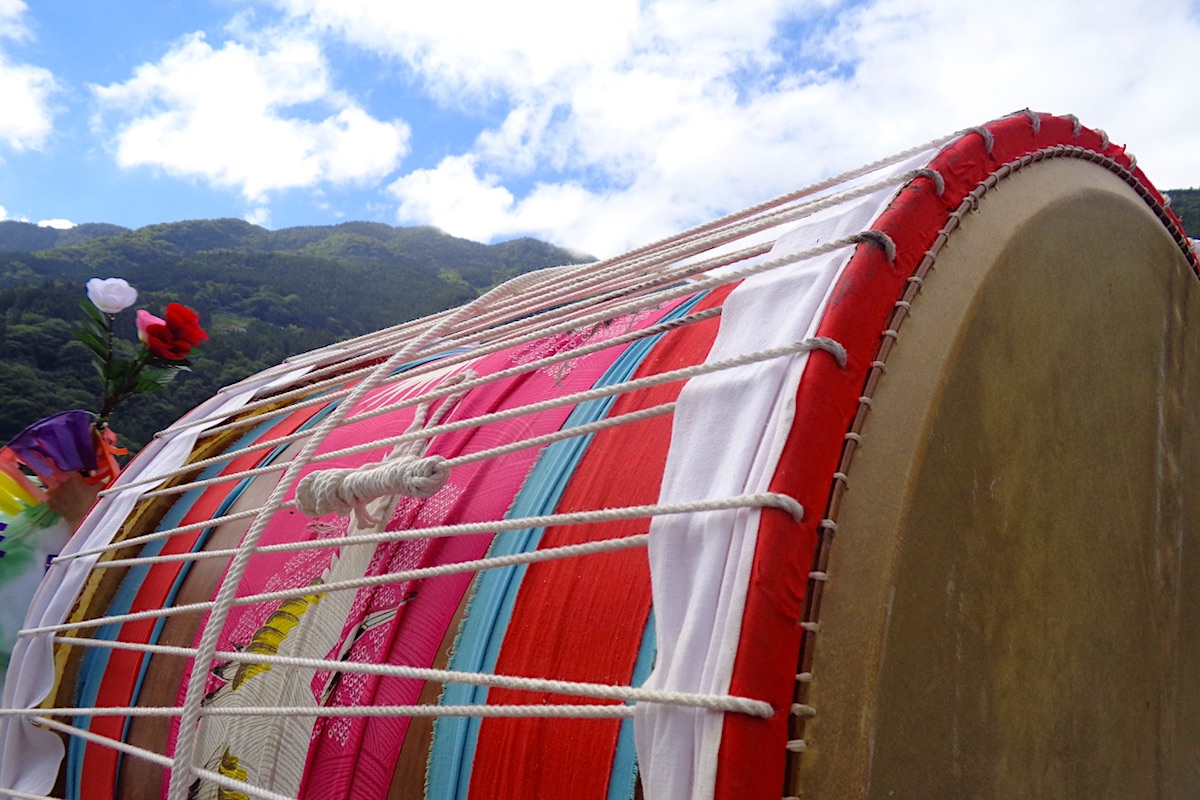 Over the following centuries, it seems that wherever the dance had once been performed it either merged into other local dances, changed its style, or just simply stopped being done. However, due to the geographic isolation, it is understood that the dance which is still performed in Nishi-Iya is in the original style, and therefore in 1976 it was designated as a Nationally Important Intangible Folk Culture Asset of Japan.

In Part 2 we head up to the Zentoku Tenmangu Shrine for the main performance.

Held annually on the 25th day of the 6th Lunar month according to the old Japanese calendar (aka Chinese calendar). In 2023, it will be August 11th.

The costume preparation and initial performance takes place starting from about 8:00am at the bottom of Zentoku village in Nishi-Iya, not far from the main Kazurabashi Vine Bridge. At about 10:00am the main ritual and performance is held at the Zentoku Tenmangu Shrine at the top of the mountain.