Home to over 350 life-sized scarecrows, the small hamlet of Nagoro in Miyoshi City’s isolated Iya Valley has attracted attention from around the world for its unique and poignant concept. Brainchild of local resident Ayano Tsukimi, we learn more about her artwork and other creations.

Being welcomed by scarecrows at Nagoro in Miyoshi’s Iya Valley

As you enter Nagoro village along the main road, which lies hidden within the deep mountains of Tokushima Prefecture, the scores of scarecrows positioned around immediately gives a feeling of activity, and unless knowing otherwise, one would never suspect that this was all the work of one woman. 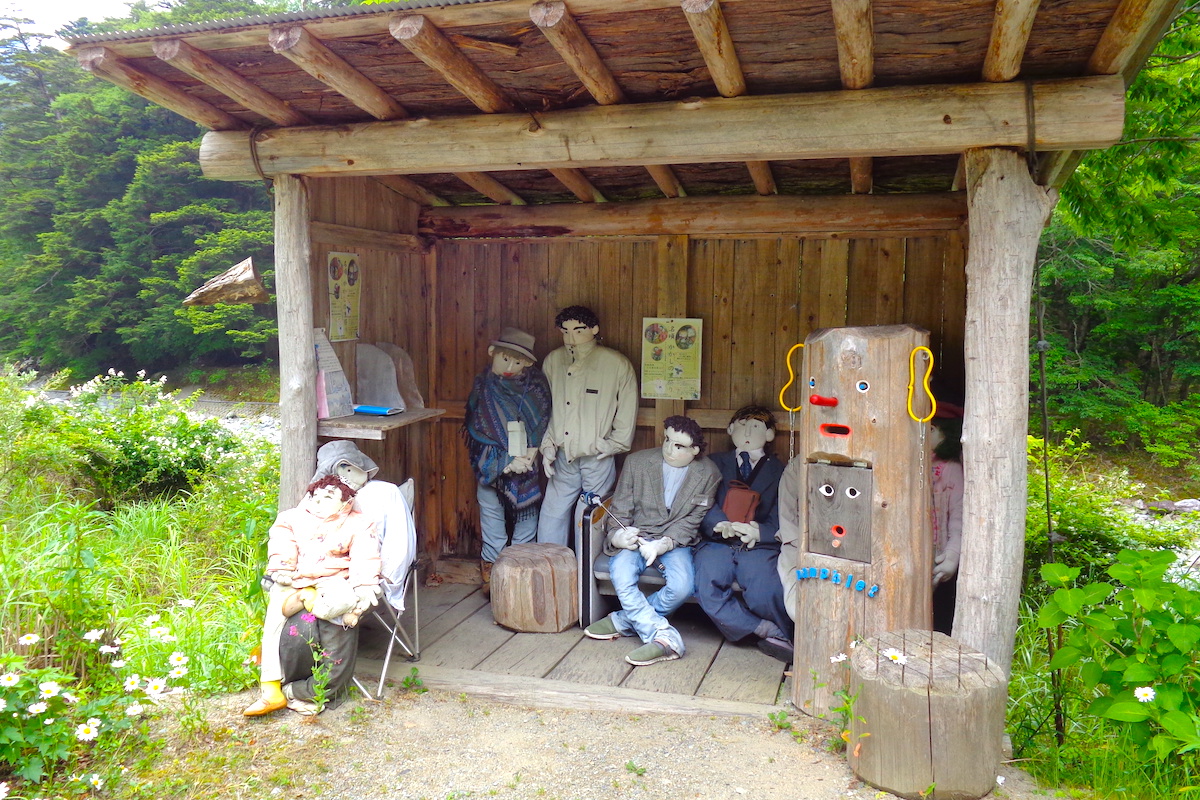 The “Scarecrow Bus Stop” here is a wooden shelter packed with the life-sized dolls, as if waiting to be picked up. Dozens more occupy the surrounding gardens, others look out from between the trees, and even more can be found actively working in the small farm fields. 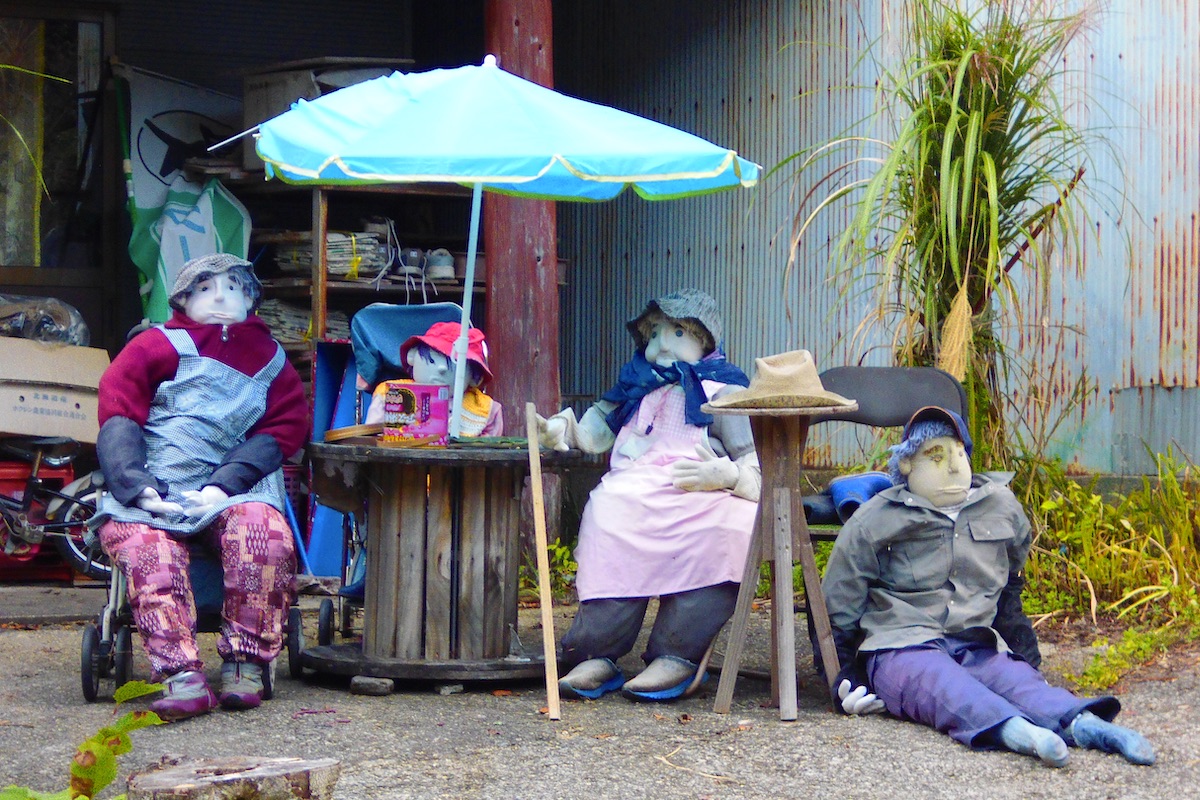 I walked with creator Ms Ayano Tsukimi along the bustling “Scarecrow Street”, encountering ever more of her new “neighbors” along the way riding bicycles, peeking through the windows of dusty buildings, and sitting together as if chewing the fat of the day. 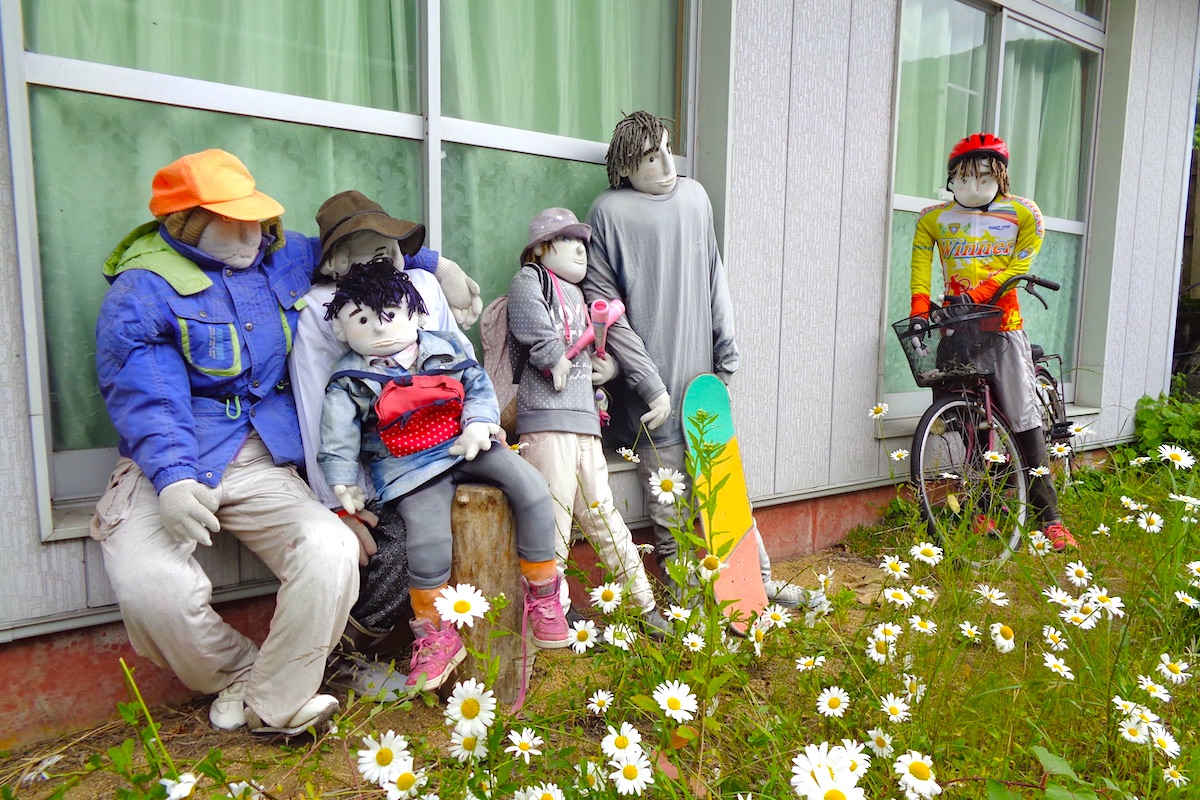 Though this otherwise forgotten hamlet at the deepest end of the remote Iya Valley now attracts a fair number of visitors, it should be noted that this place is not a big-budget tourist trap, but then again, that’s part of the appeal. Things are not polished and pristine, there are few signs, and there are no souvenirs for sale. Made with donated old clothes, the scarecrows along the road have a rough yet naturally organic feel which meld seamlessly into the timeworn landscape. I’ve often felt that the Iya Valley as a whole was Japan’s antithesis to Tokyo, so perhaps the Scarecrow Village is it’s inverse to Tokyo Disneyland.

Encountering the scarecrows brings back memories

I arrived with Ayano at her “Kakashi Kobo” (“Scarecrow Studio”) which is set in the building of Nagoro’s long-defunct kindergarten. Within the entrance a scarecrow grandmother carries a child on her back, and Ayano mentions that this is one of her favorites. 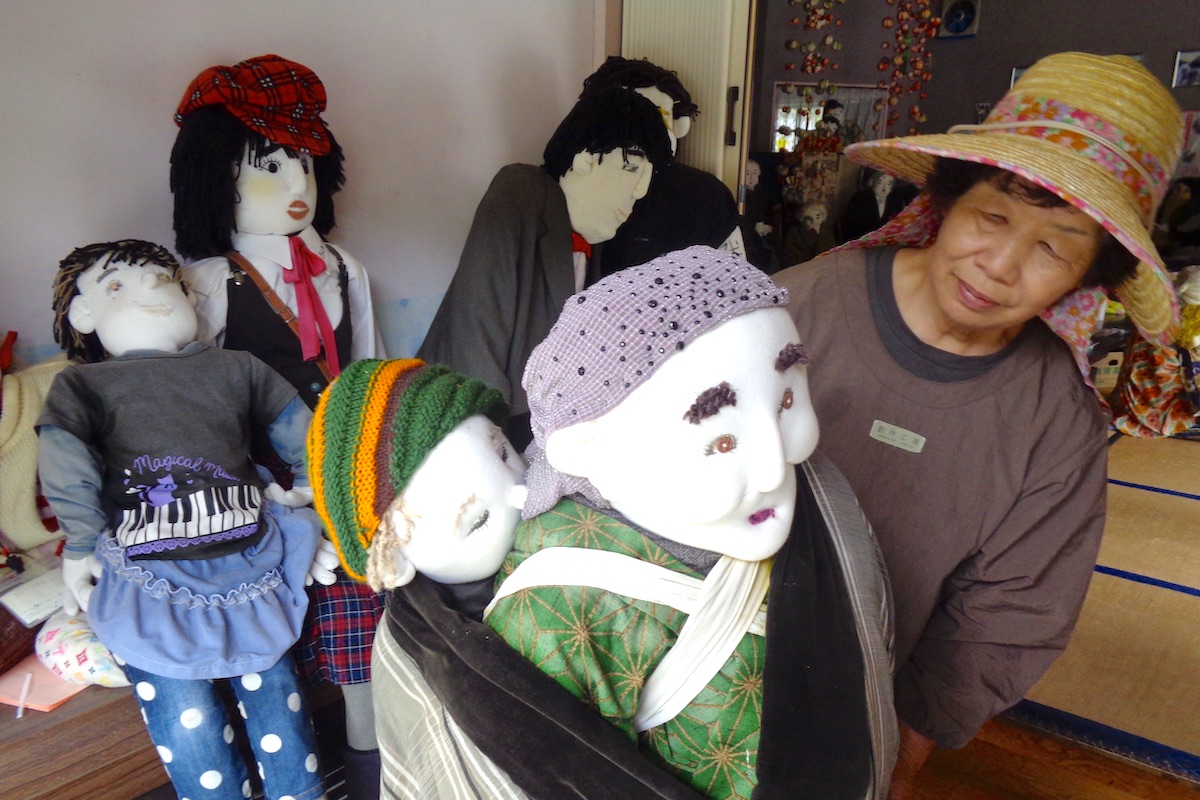 Once fully inside the mind bends with encountering what is going on. A crowd of scarecrows fill the room, and even though I’ve been inside here plenty of times, even I am still momentarily transfixed into believing the old grandmother scarecrow taking a nap on the floor is actually real. Apparently many others feel the same way and take their photo together lying down beside it. 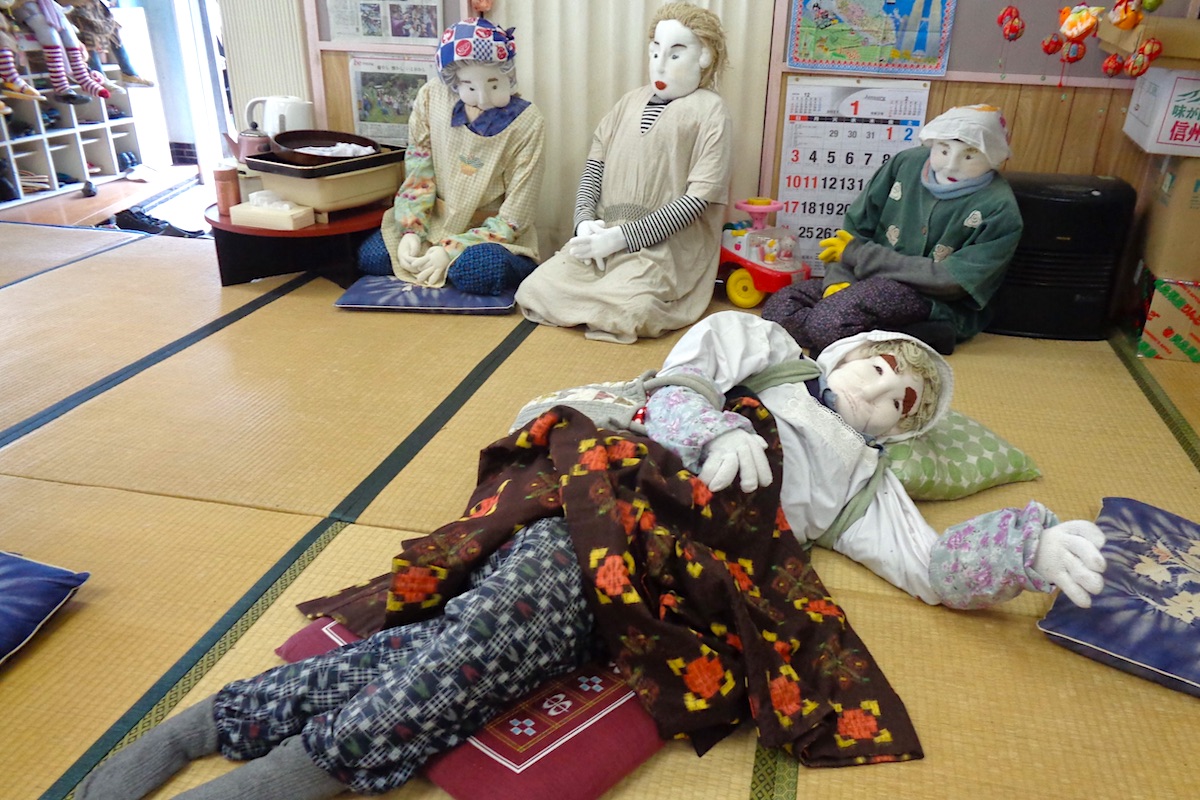 Ayano is often thematic with her scarecrow arrangements, and most of the scarecrows in here are wearing beautiful kimonos. I was told how many elderly visitors often take notice of these donated antique robes adorned with now out-of-fashion colors and motifs, and they fondly reminisce how they wore kimonos with the same patterns when they younger. 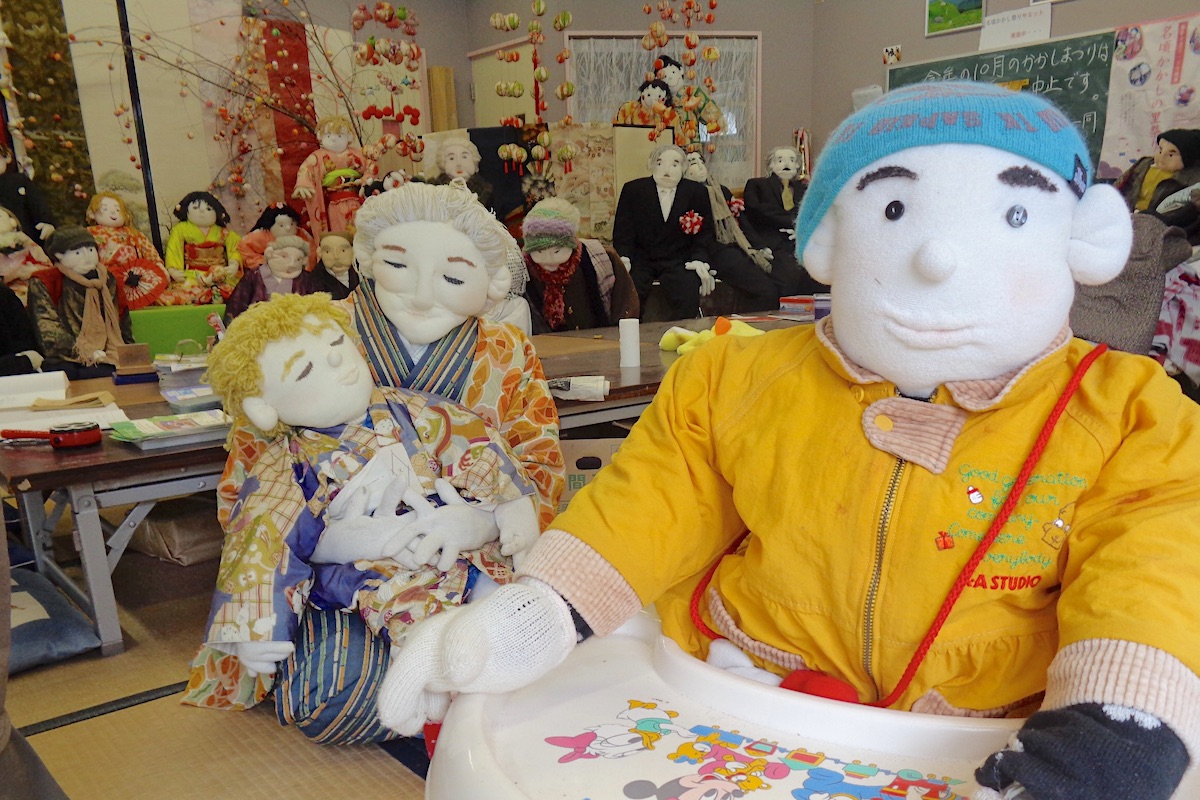 Inside the “Scarecrow Studio”, where the scarecrows are “born”

Upon a table in the center of the room is where Ayano makes all her scarecrows. Various sewing items and construction materials are spread about, including stacks of old clothes and bundles of newspaper which she uses for stuffing.

Many neighbors and friends have helped her make the several hundred scarecrows that now fill the village, and she also offers workshops for visitors to make their own which they can take back home. A range of people have come to make scarecrows with her over the years, including children, celebrities, and foreigners from several different countries. 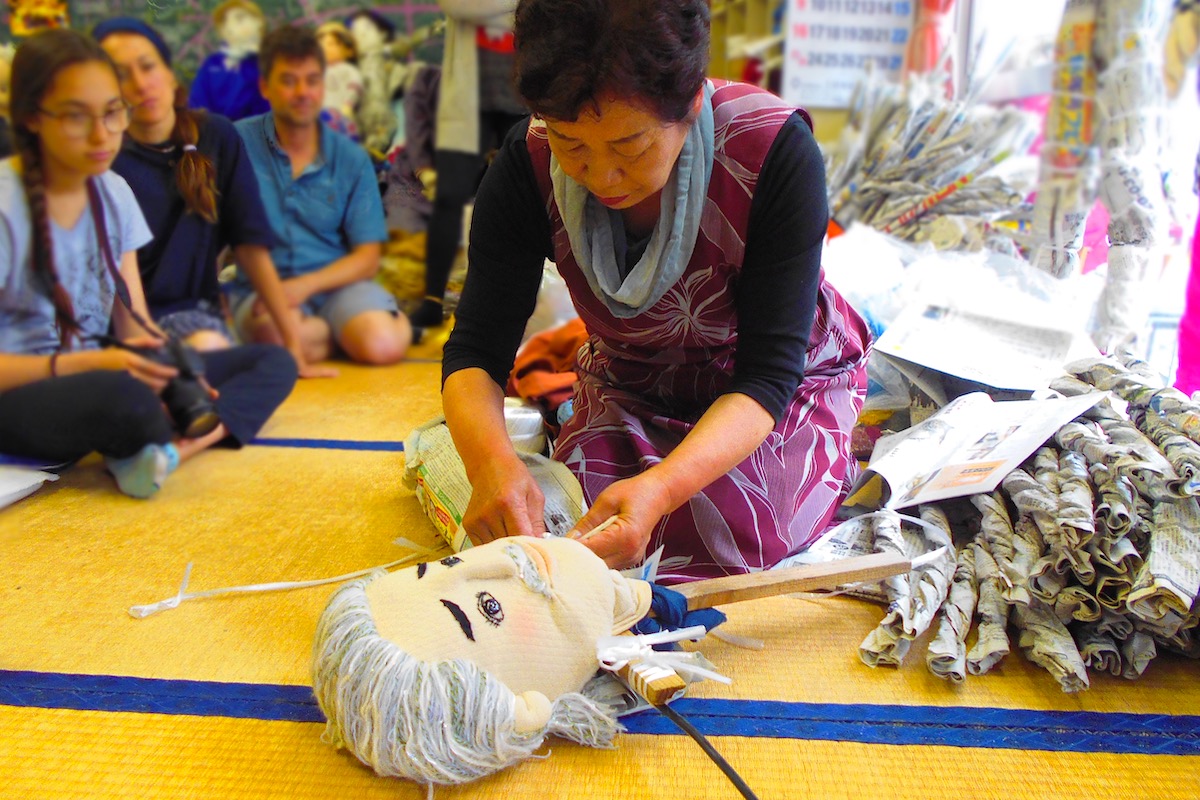 She mentions how this is her greatest inspiration, “To have such encounters way out here with such a variety of people has been so fun.”

Memories of Nagoro on the way to the “Scarecrow School”

On the other side of the river from her studio is Nagoro’s former elementary school, which of course she has now occupied with her creations. As we walk over the bridge to get there, one of the area’s dams can be seen just upstream. 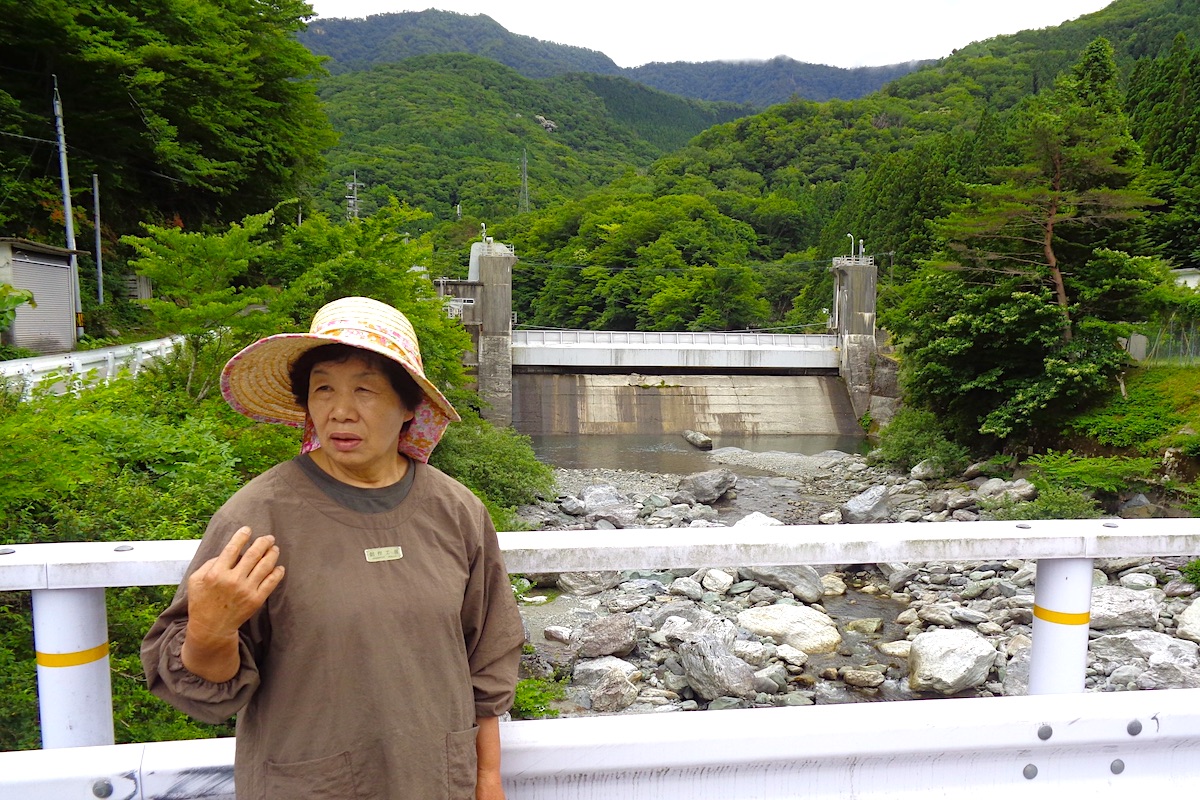 Though Nagoro village had been in existence for centuries, this now tiny hamlet had reached its apex when Ayano was a child. Back then, this dam as well as a much larger dam a bit further up the river were under construction and subsequently in need of constant staffing. Over 300 people lived in Nagoro back then, half of whom worked on the large hydro-project. It’s hard to imagine now, but this isolated spot that is literally at the end of the road was home to several shops, inns, and even a pachinko parlor.

But with the dam’s functions becoming automated a few decades ago, the already dwindling population rapidly collapsed. Nowadays, Nagoro’s population of 26 residents is outnumbered by scarecrows almost 15 to 1. 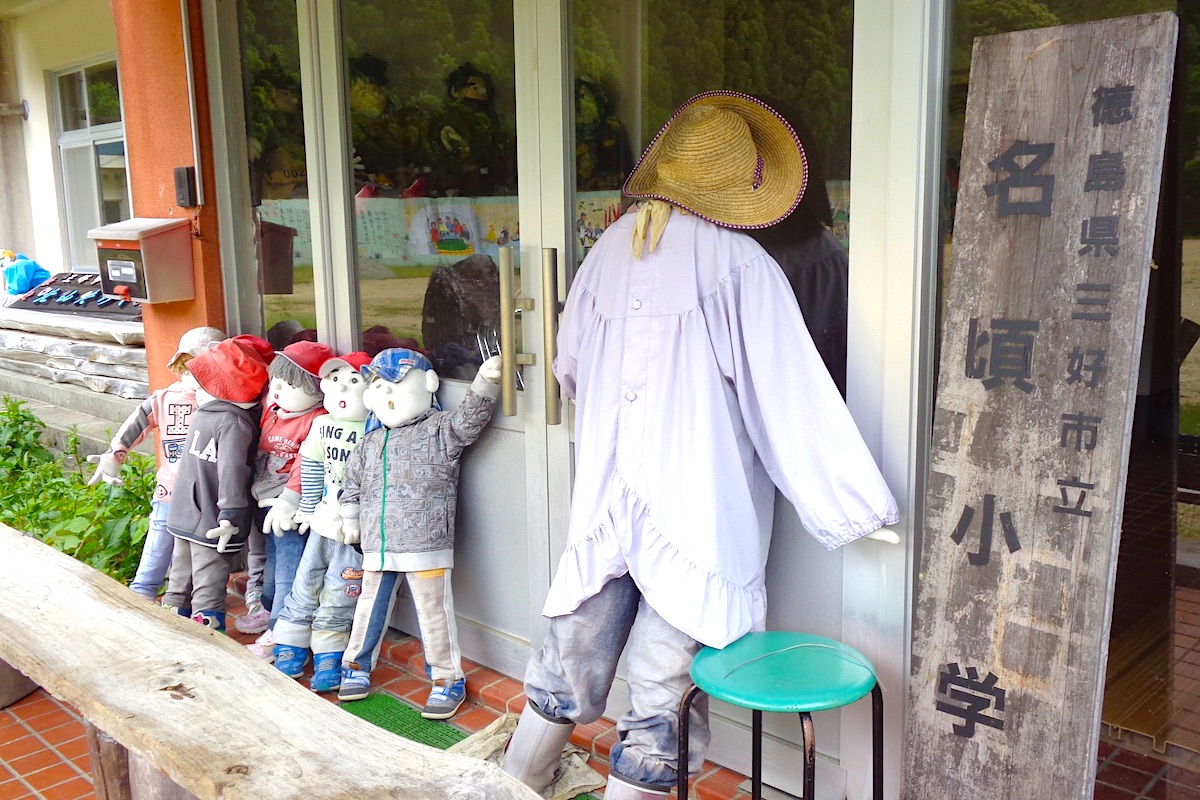 It’s been nearly two decades since Nagoro’s last actual child roamed the halls of its elementary school, but instead of just letting the large building sit empty, Ayano has masterfully used it as her own canvas.

So inside the school’s gymnasium it is now bustling with activity.

Group of scarecrows play games like tug-of-war. A scarecrow wedding takes place on a stage in the back. A horde of young and old costumed scarecrows take part in the Awa-Odori, which is a historic dance performed throughout Tokushima Prefecture. 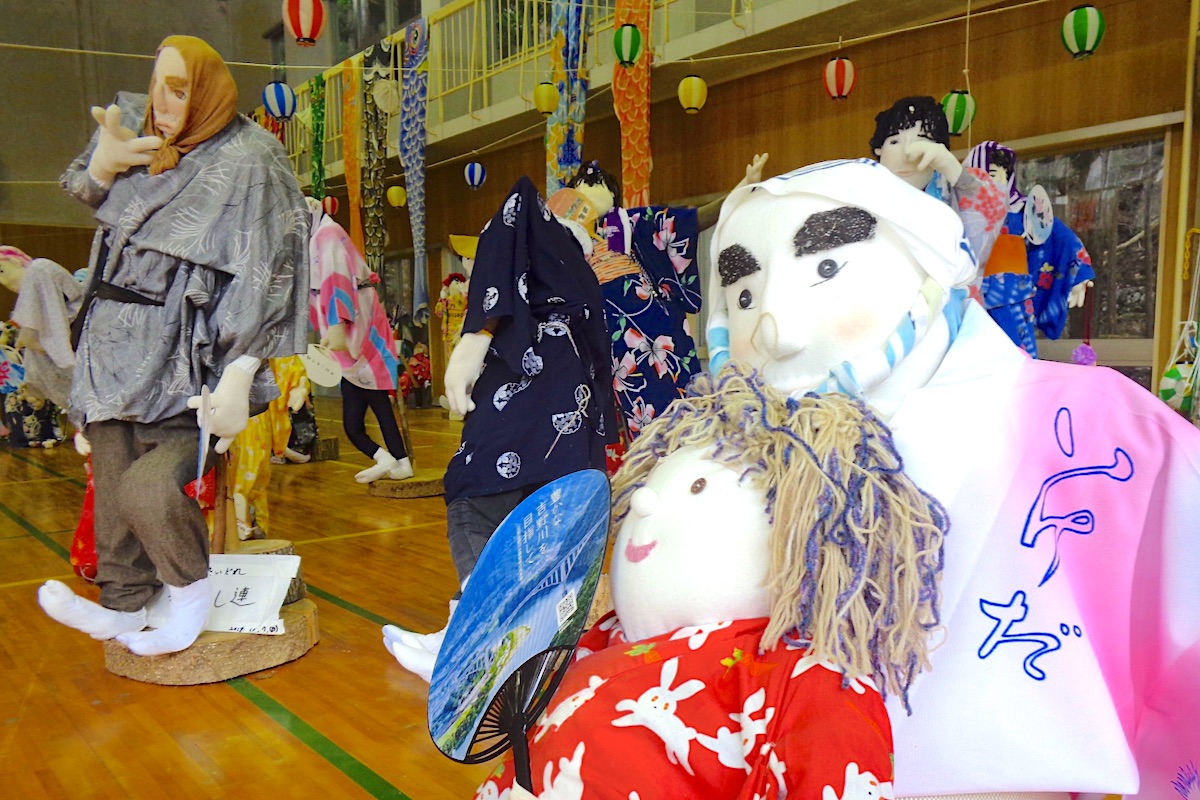 Ayano stepped aside to turn on a stereo, and soon enough the large gym was filled with the distinctive drum and flute melody of the Awa-Odori. The atmosphere immediately became even more lively, and she quickly convinced me to do the traditional dance along side her. 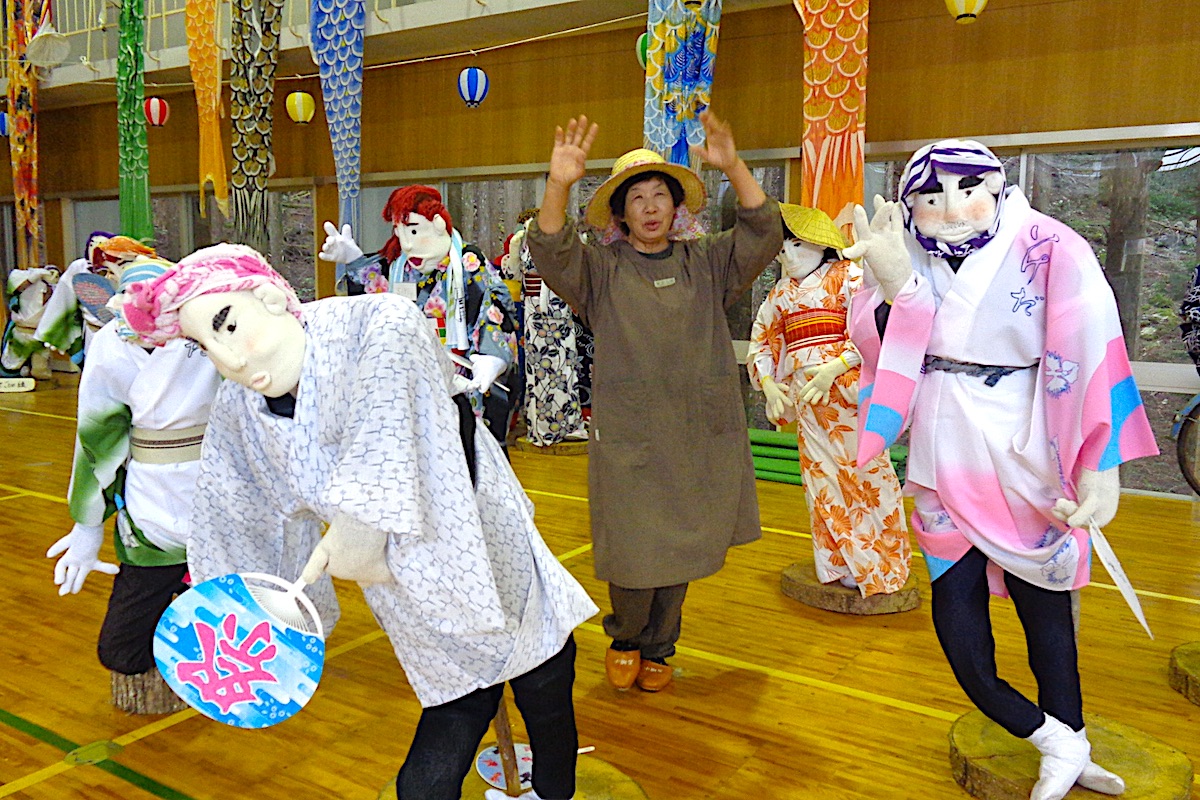 A set of other tourists happened to also be inside at the moment, and she also got them to partake in this famously inclusive dance. As we pranced about, I could tell that they had no idea that they were being led by the mastermind behind this massive village-encompassing art installation, and perhaps her humble indifference to such notoriety is what I like about her the most.

Every October Nagoro hosts a “Scarecrow Festival” at this elementary school, with each year embracing a new theme. At this time it’s also possible to enter the rest of the school, where the classrooms are filled with diligent scarecrow students and teachers, and outside various scarecrow processions are set up throughout the school’s grounds. 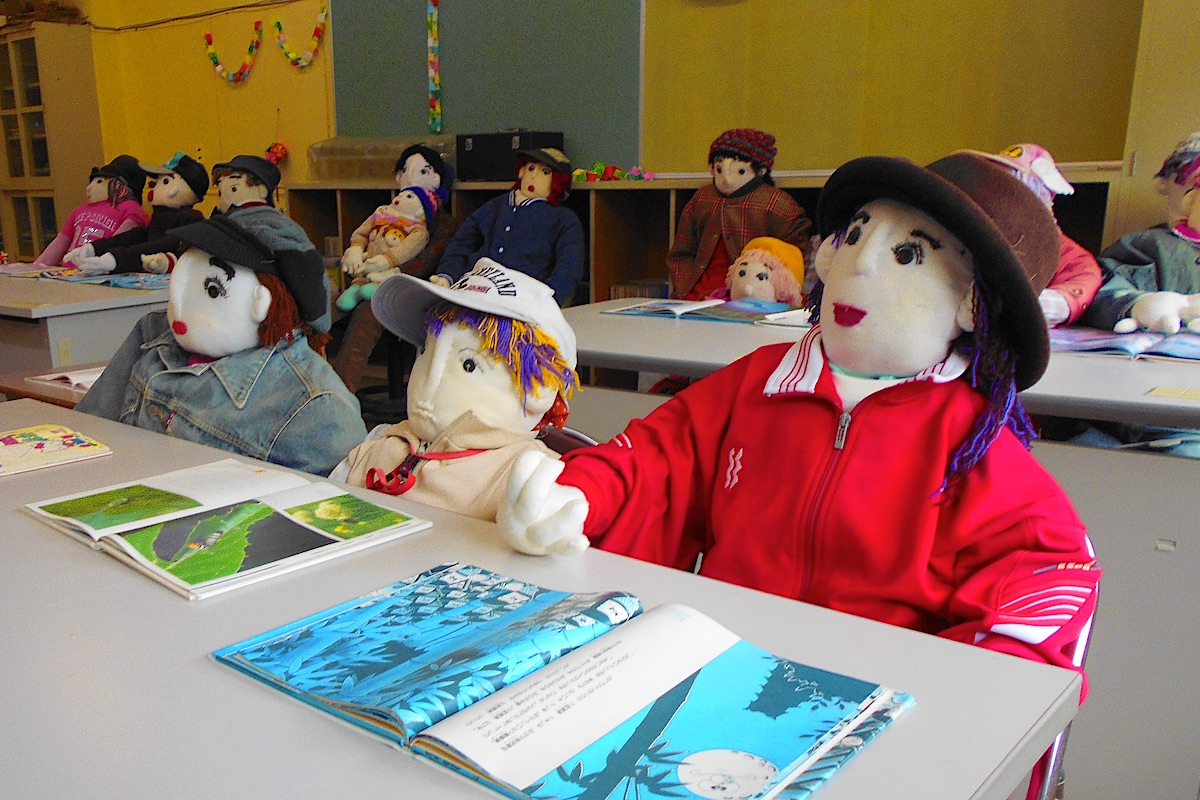 Many people come in to enjoy the day of festivities, but due to the coronavirus it has been cancelled for the past couple years. But regardless of any special event, Nagoro is still a playfully unique place to experience at any time during any season.

In Part 3 we find out more about Ayano’s life in Iya and other creative activities.

The Scarecrow Village is available to encounter year-round but when visiting, please be respectful that actual people do still live here, and avoid trampling on fields or stepping into private property.

For more information about how to visit the Scarecrow Village, check the IyaTime website: