Tokushima’s Iya Valley is famed for its lovely natural landscapes, and the Iyakei Gorge is one of the valley’s most dazzling spots, especially in the autumn. Several majestic viewpoints are located throughout the gorge which allow unique chances to take in the seasonal splendor.

A gorgeous place in every sense

The 13km long Iyakei Gorge is home to several awe-inspiring viewpoints, among which include the panoramic Hi-no-Ji Bend, as described in Part 1 of this series.

But all along the Iya Highway as it weaves its way upon the wall of the valley there are lots of other chances to take in the scenery. 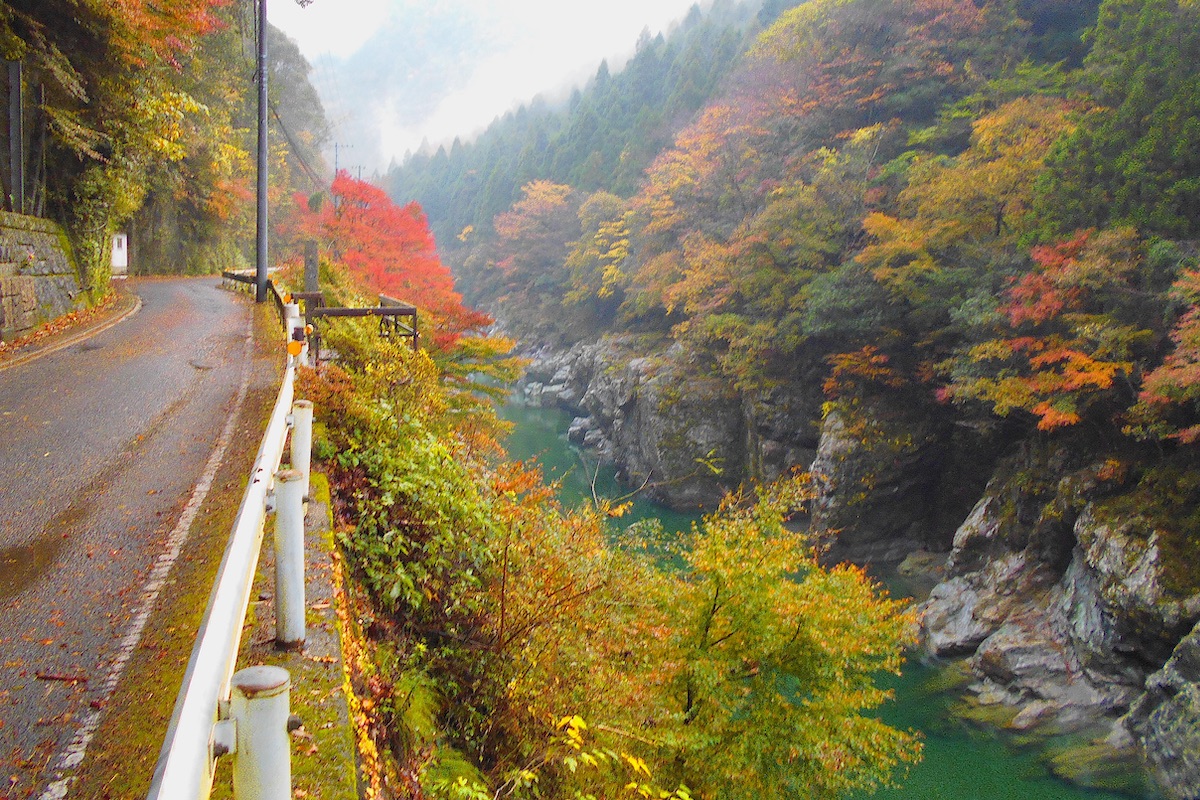 The road goes entirely on the eastern side of the gorge, so if driving up from Iyaguchi and Deai village, the view goes out to the right, while on the left side it is usually full of rock faces that were carved out of the mountain when the road was originally built.

With twisted trees growing out from the jagged cliffs of this V-shaped valley, it often looks like you are moving through a traditional Japanese ink painting. 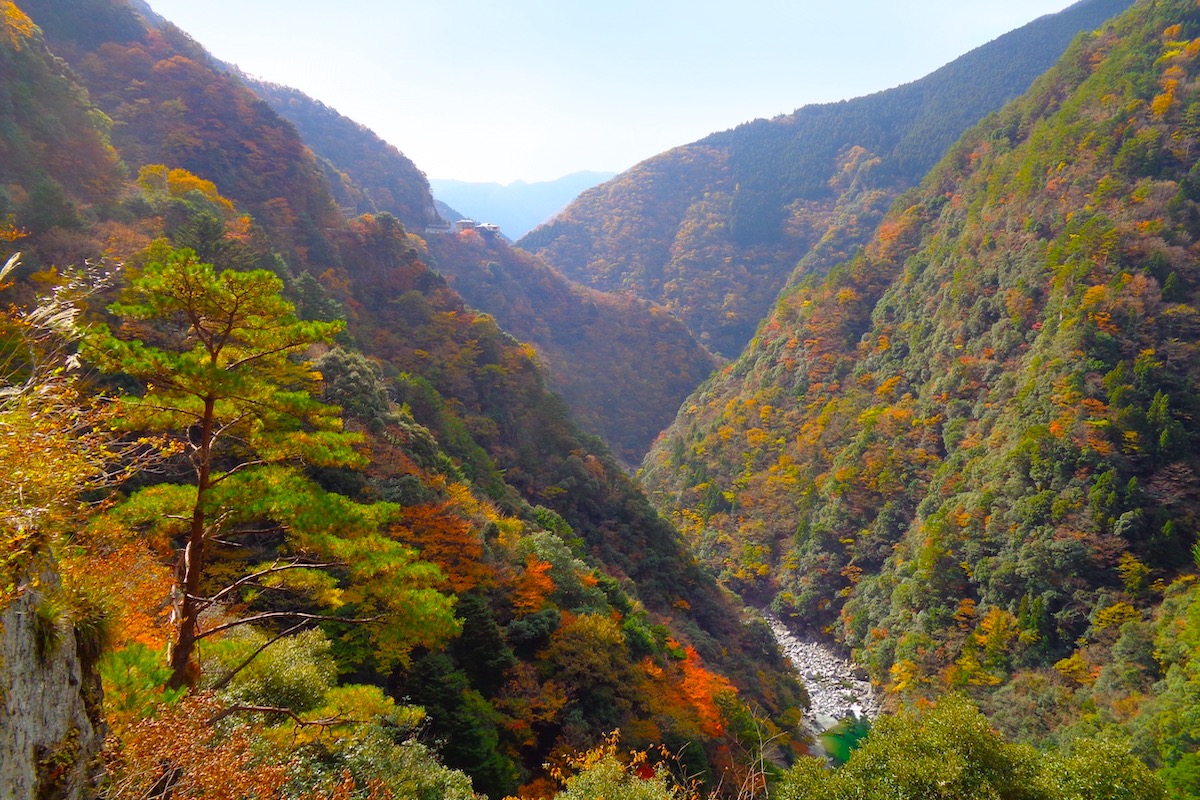 The Iya Highway, a drive to test your mettle

As explained in Part 1, the one-lane Iya Highway is not for the faint of heart with its many twists and turns on the steep mountainside, particularly in the lower section going up from Deai. But for many people, such cliff-hanging conditions are part of the allure. 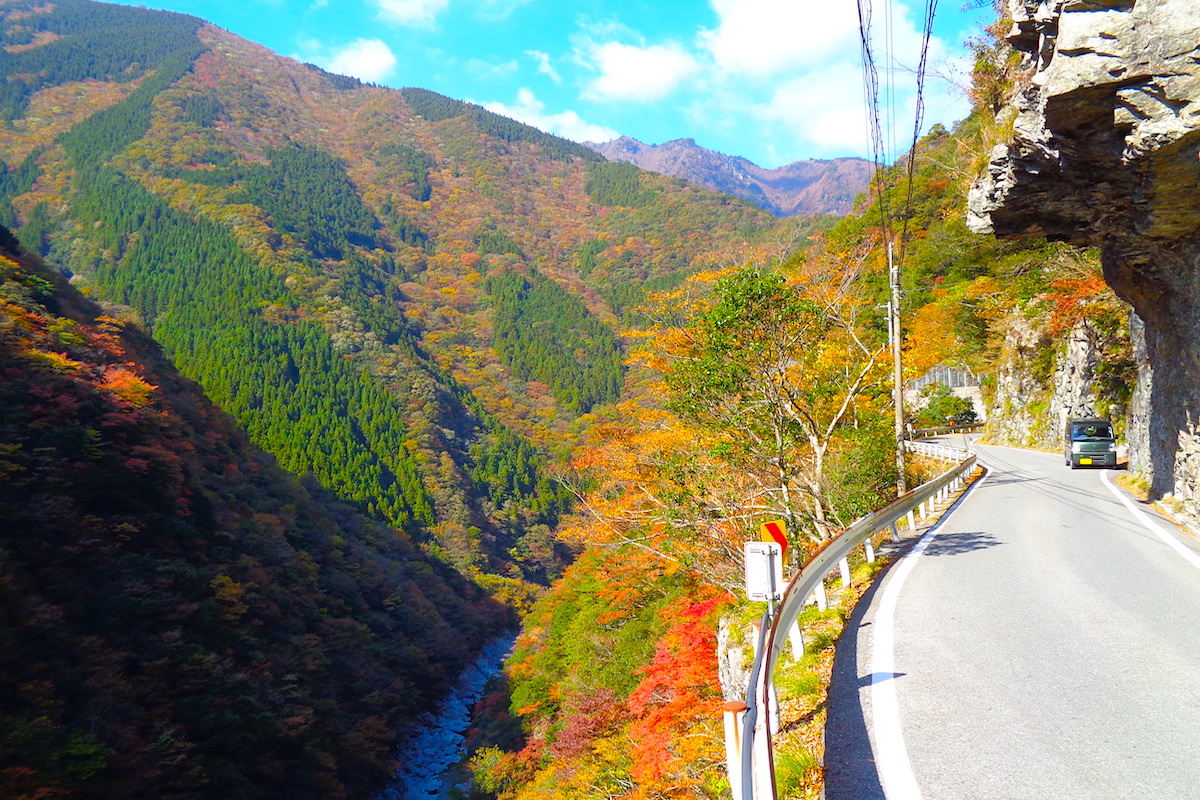 So it can be fairly common to see classic cars, convertibles, and groups of cyclists along this back-country marvel of civil engineering. But if you do decide to drive yourself, do be cautious with any oncoming traffic, particularly on curves.

And if coming head-to-head with another vehicle, do note that it may be necessary for one car to reverse a good distance in order to find a space where it is wide enough to pass each other. 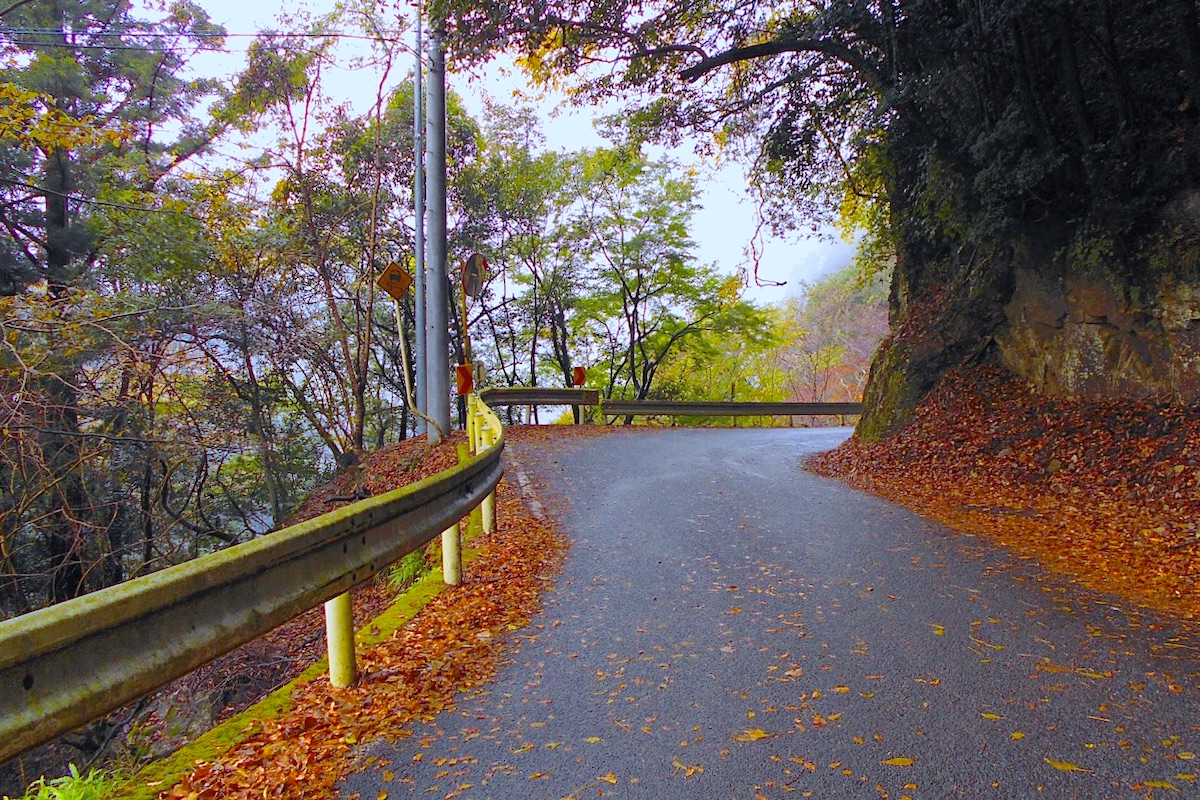 The Peeing Boy Statue: A traditional test of courage

When the road was first being built a hundred years ago, the people of Iya as well as the construction workers who built it did not have their own cars, so they just walked the Iya Highway through the gorge.

But even though they could not test their fortitude by driving a vehicle along these death-defying cliffs, the men and boys instead challenged themselves by trying to urinate off one of the most precarious points along the route.

In honor of the hearty souls who dared one-another in this way, the now famous Peeing Boy Statue of Iya was built and installed on this precipice in 1968. 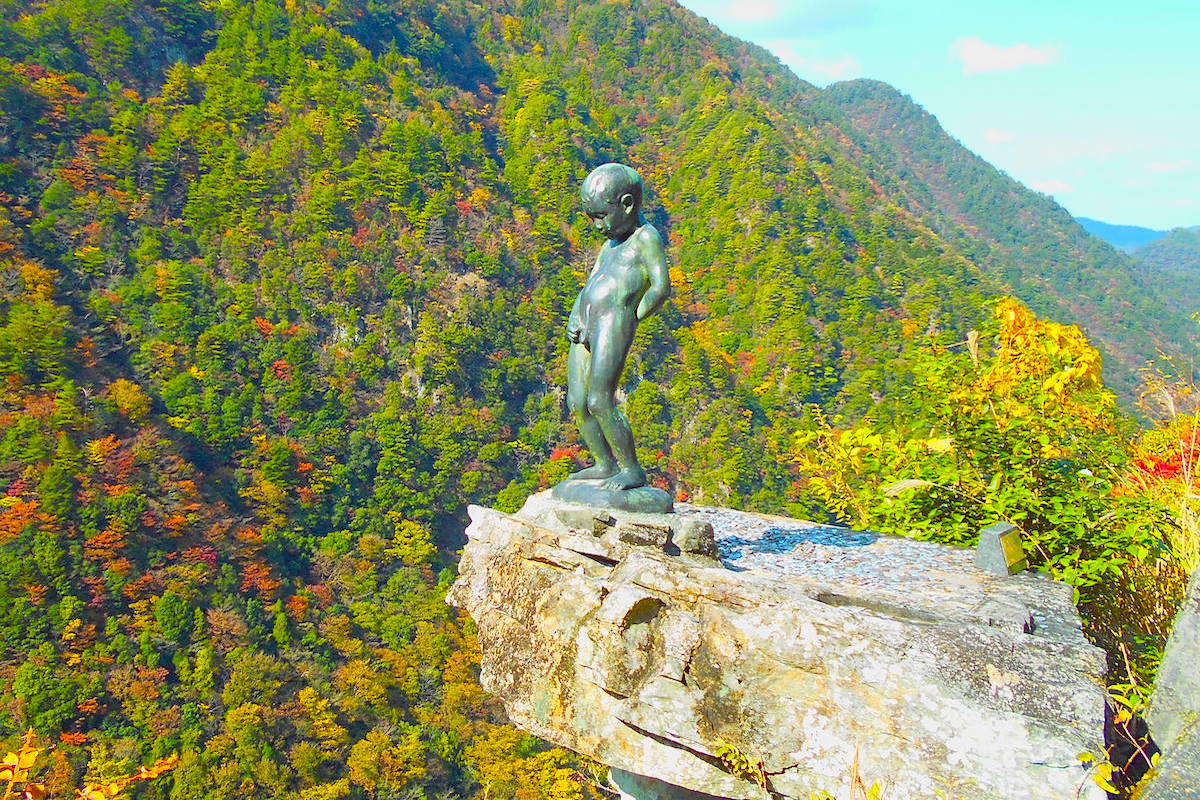 Perched on a rock that hangs about 200 meters above the river below, the statue is the work of Tokushima sculptor Yoshiyuki Kawasaki. He modeled the piece after his own son, who was four years old at the time.

Nowadays the Peeing Boy Statue stands as a testament to the child-like bravado that occurred during the earliest days of the Iya Highway, and its picturesque position makes it worth seeking out when visiting the Iya Valley. 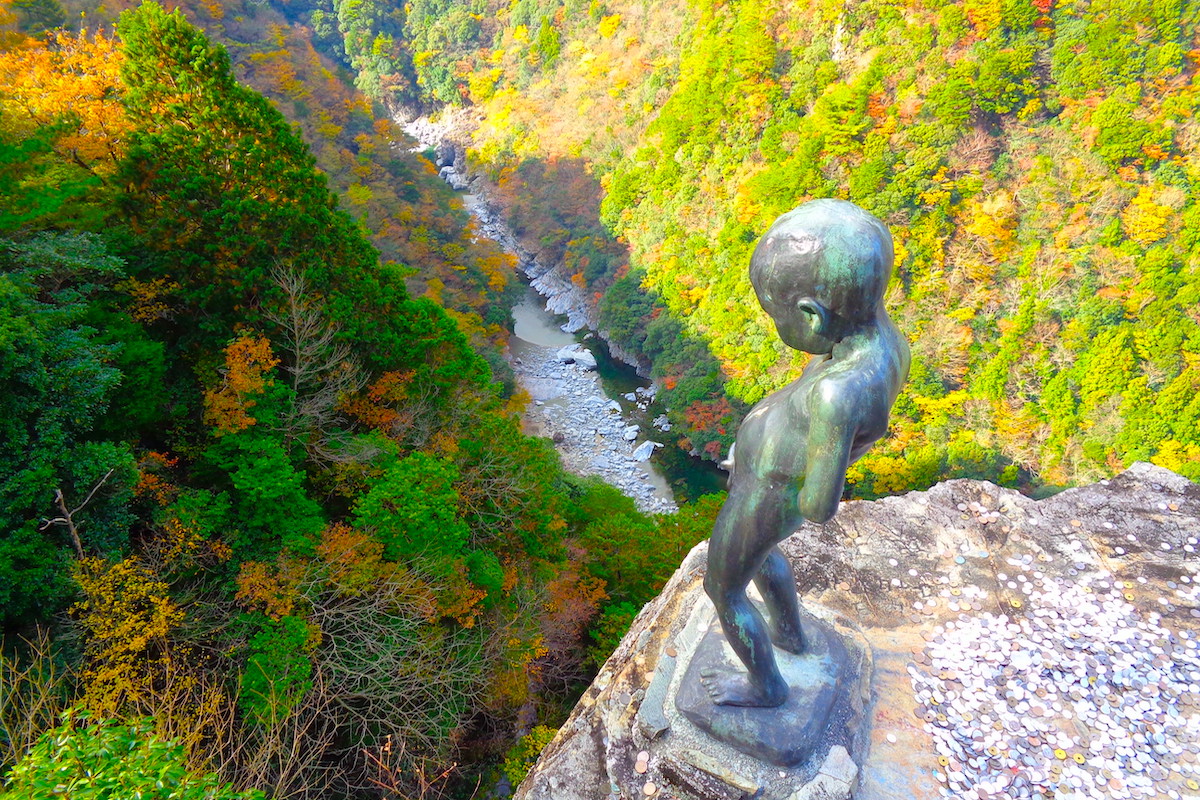 Most people visit the Peeing Boy Statue by driving in from central Nishi-Iya and then back again. This 5km upper section through Iyakei Gorge takes about 15 minutes each way to drive and the road sometimes has two lanes, so it’s not too onerous. The Hi-no-Ji Bend viewpoint is located about halfway between the statue and central Nishi-Iya.

The drive up from Iyaguchi and Deai

If you do opt to drive the entirety of the Iya Highway (Prefecture Rt 32) from where it technically starts in Iyaguchi all the way to central Nishi-Iya (or vice versa), the lower section between Deai and the Peeing Boy Statue is less traveled since it is almost entirely one-lane with lots of curves.

For the first 4 or 5km from Iyaguchi to Deai the road is fairly decent and not so curvy, and a new tunnel currently being built in here will someday make it easier. 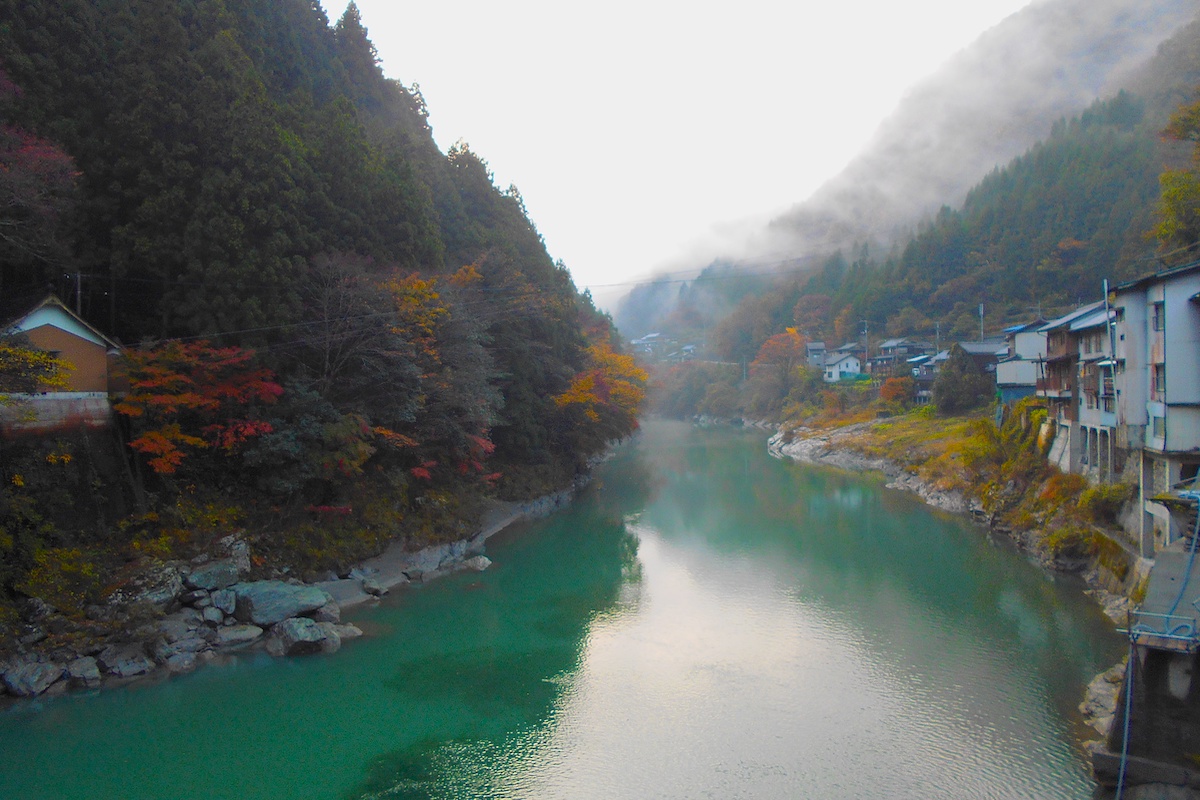 At Deai, Rt 145 splits off and this leads to the lovely Matsuogawa Onsen (hot spring) a few minutes away.

Back on the Iya Highway, soon after passing Deai village, the small Iya-gawa Jizoson shrine can be found along the roadside. 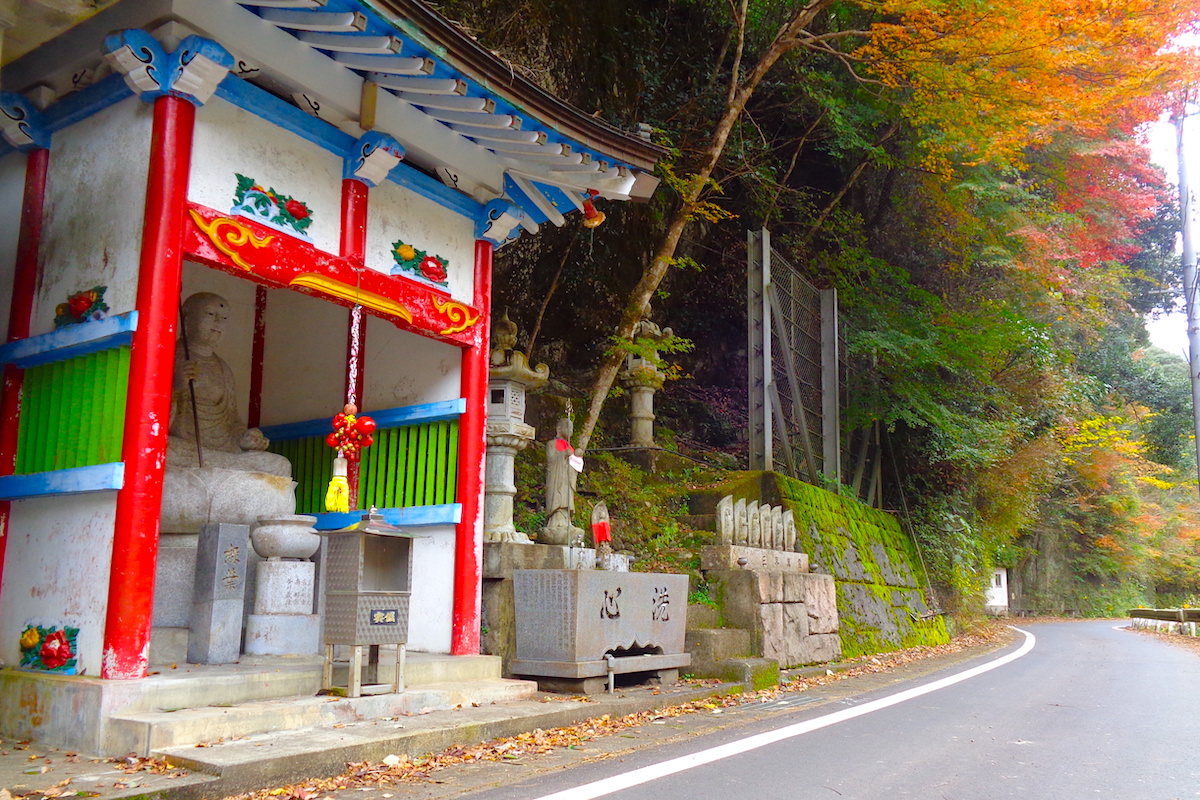 This shrine is dedicated to safe passage and driving protection, and in the early days back before guard rails were installed, the risks with driving beyond this point were much greater. But if driving the route for the first time, it still may be worth giving a little prayer here before continuing… just in case.

After the shrine the houses end and the curves begin as the road gradually starts to gain elevation above the river. About 3km from Deai you pass the entrance to the riverside Iyakei Campground (reservations required) and about 1 km beyond this is the  Iyakei Viewpoint. 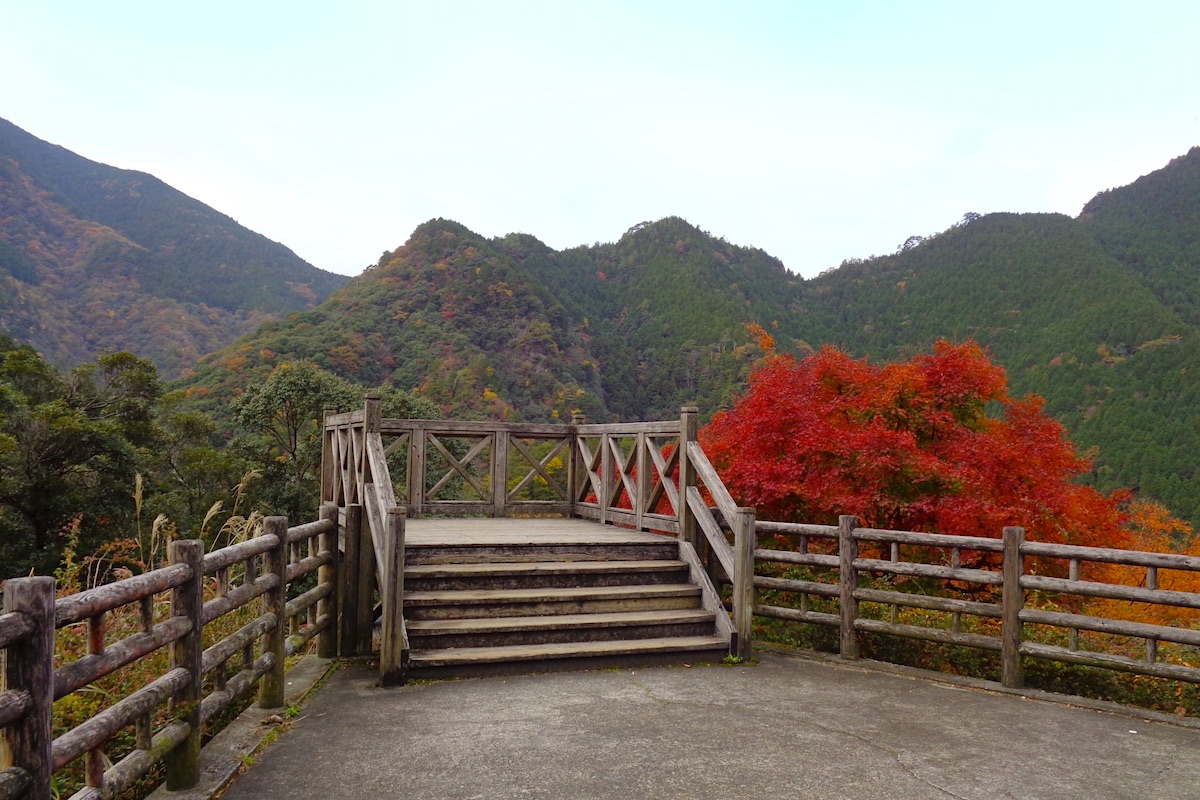 This viewpoint has a few parking spaces and some toilets, and it makes for a nice break to take in the sights. Stairs lead up to a place above where there are some covered tables and a great view that looks deeper up into the gorge. 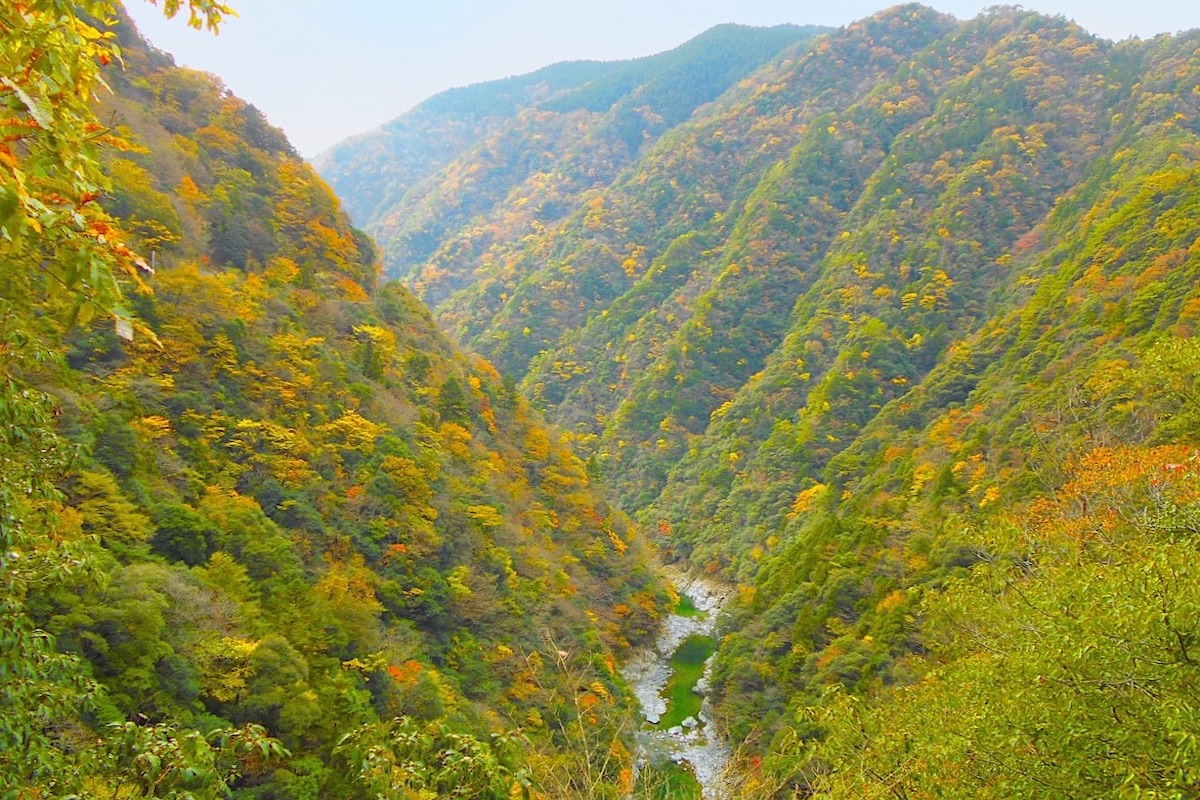 Beyond this viewpoint it is another 3 km more to reach the Peeing Boy Statue, with lots of curves, cliffs, and sporadic views in between as you get ever higher above the river. And as mentioned above, its another 5km from the Peeing Boy to reach central Nishi-Iya.

In total, from Iyaguchi all the way to central Nishi-Iya (or in reverse) it takes about 45-50 minutes to drive, not including any extra time needed for stopping at the various viewpoints.

In Part 3 we check out the only hotel, hot spring, and restaurant located within the Iyakei Gorge.
>>Iyakei Gorge in Autumn Part 3 | A Riverside Hot Spring and Lunch with a View

For more information about the Iyakei Gorge and the rest of the Iya Valley in English, see here: