The majestic Iyakei Gorge in Tokushima’s Miyoshi City is renowned for its stunning beauty, and autumn is a particularly wonderful time to visit due to the brilliant colors of the leaves. There are several picturesque viewpoints throughout the gorge, as well as some other wonderful sights.

The Iya Valley in western Tokushima Prefecture is about 60km long and formed by the tranquil blue waters of the Iya River. The river emerges from springs at the farthest end of the valley that come off of Mt Tsurugi, which at 1955m, is the second highest mountain in western Japan.

From Mt Tsurugi heading gradually downwards, the Iya Valley is filled with a scattering of hillside villages and other development, forming the towns of Higashi-Iya and Nishi-Iya.

But for the lowest quarter of the valley from central Nishi-Iya until the Iya River meets with the larger Yoshino River, the valley walls narrow and it becomes too steep for habitation. This section is known as the Iyakei Gorge, and the lack of development means that it is noting but pristine forest which is especially pretty during the autumn. 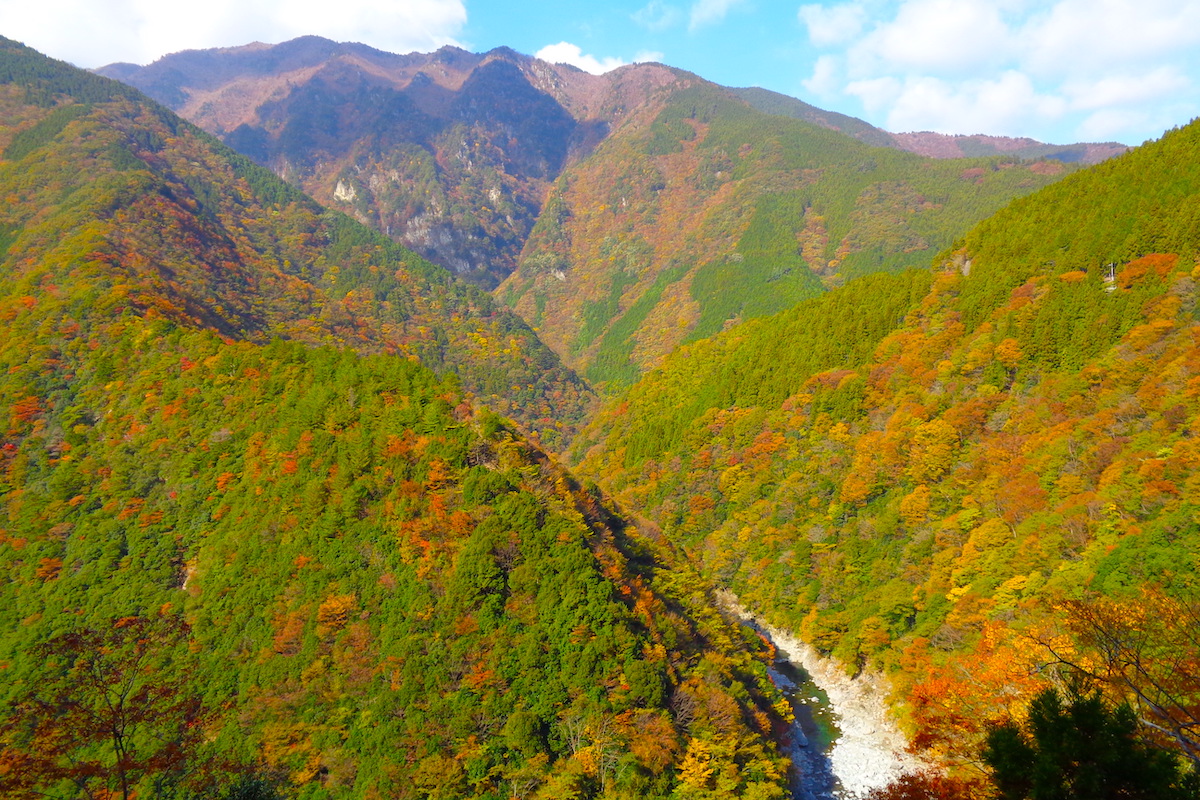 Weaving itself through the entire Iyakei Gorge is the mostly one-laned “Iya Highway” (“Iya Kaido”) which is the original road into the Iya Valley and an amazing (and often hair-raising) drive.

This cliff-hugging road is numbered as Prefectural Rt 32, and it starts at the village of Iyaguchi (“Iya Mouth”) where the Iya River meets the Yoshino and where the Iya Highway connects with the main north-south road through Miyoshi City (and Shikoku), which is numbered as National Rt 32 (and is also posted through this part here as Rt 319). Yes, the numbers are a bit confusing, but on maps and signs the Prefecture Road numbers are usually shown inside a hexagon, and the National Roads are inside a rounded triangle. 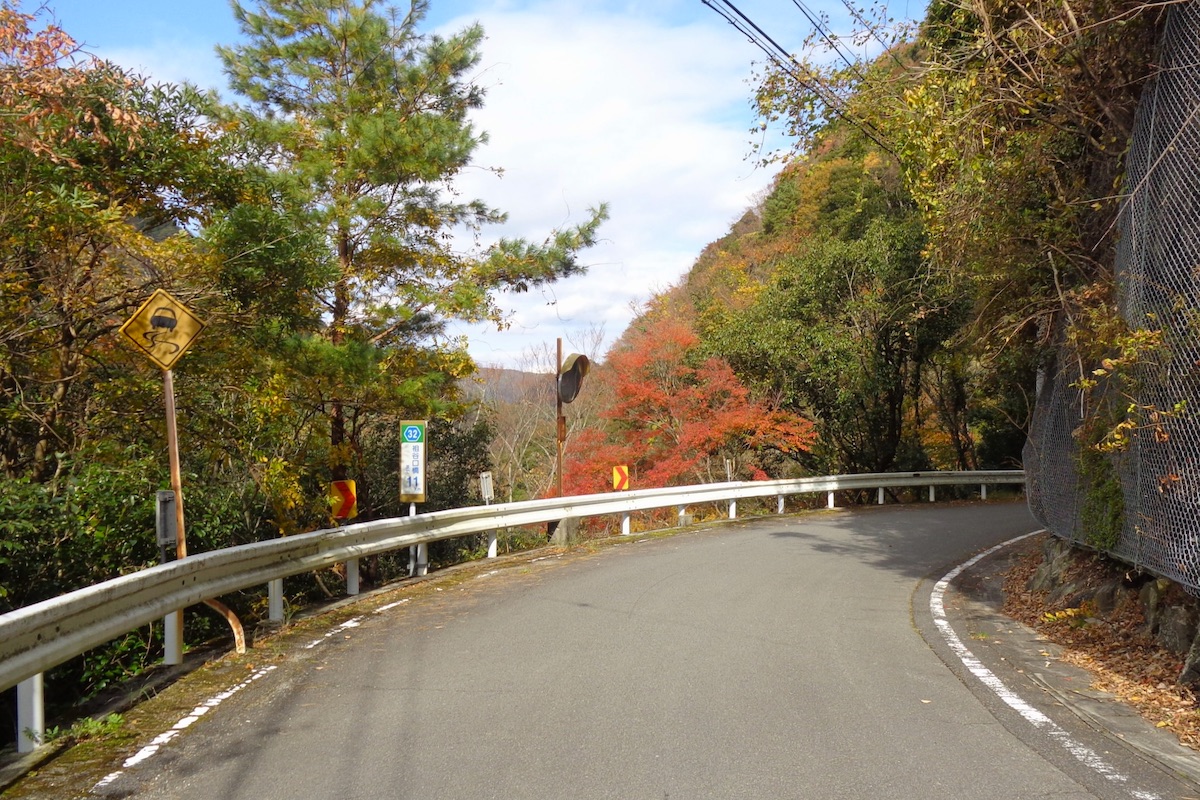 From Iyaguchi there are a few villages for the first 4 or 5km as the road goes along the riverside, but at the final village of Deai is where the 13km long Iyakei Gorge area begins and the houses finish. With the single exception of one hotel, there are no other buildings through the gorge until the road reaches central Nishi-Iya.

From Deai, the Iya Highway steadily begins to climb the valley wall as you get deeper and deeper into the gorge. There are dozens if not hundreds of curves that have been cut into the mountainside, such that on one side are often sheer rock faces and on the other side is an increasingly magnificent view. 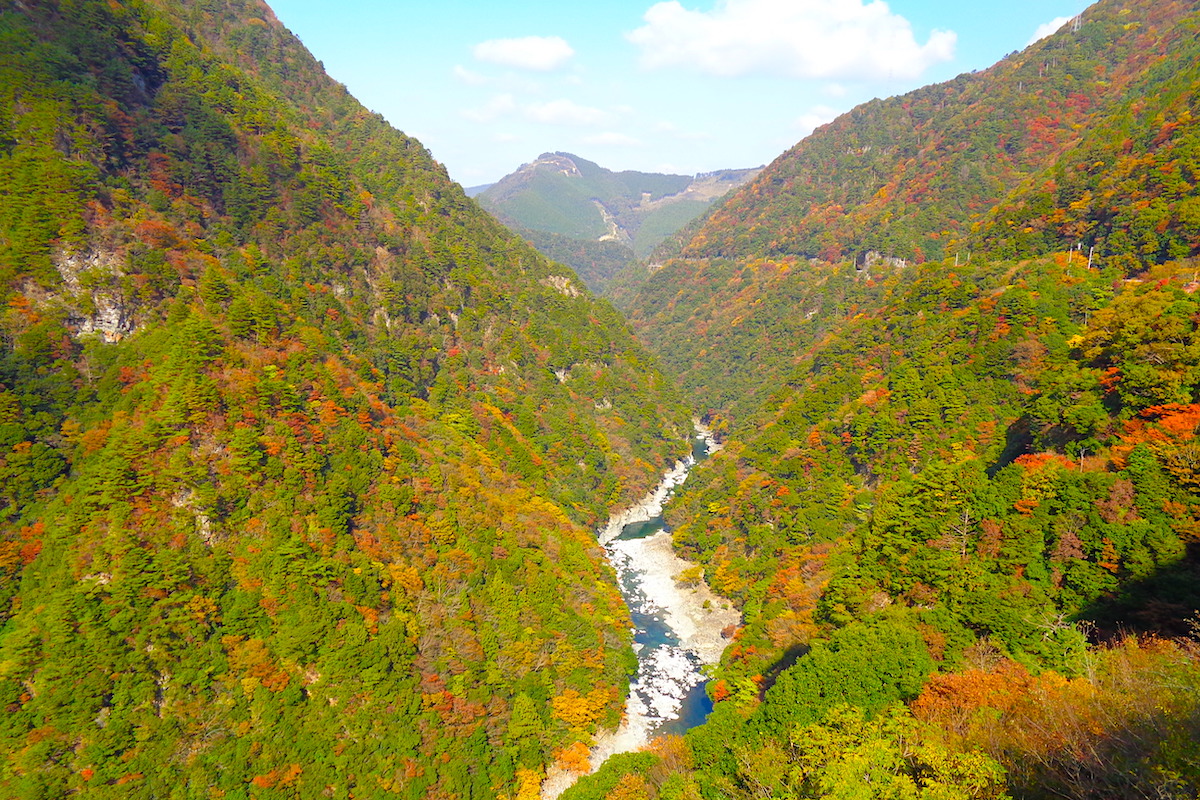 Many of the curves on this one-lane road are blind, so its important to take it slow and look at the mirrors that are set up so that you do not run into any oncoming vehicles! And if you are not used to driving on the left, then be extra cautious. 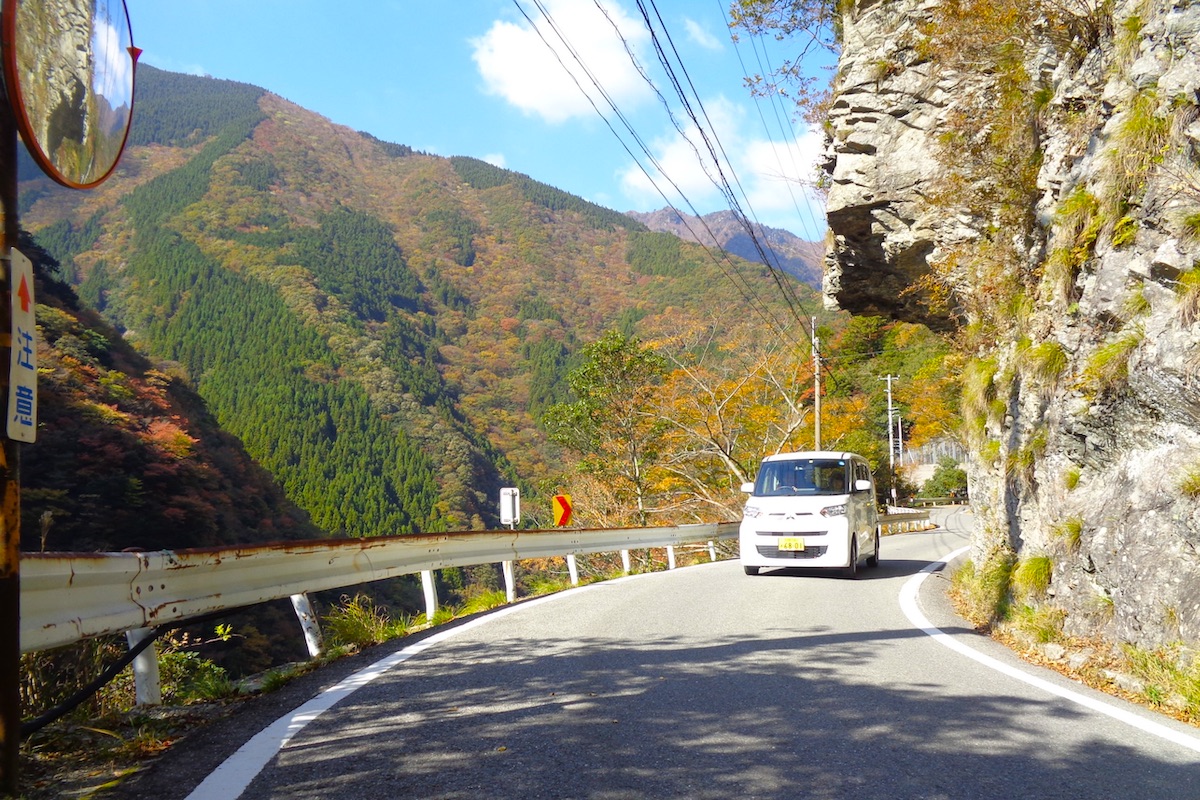 The Iya Highway: a lifeline for the local people

Nowadays the old Iya Highway is not so commonly used by the Iya people. But when it was originally built in the 1920s and 30s, the Iya Highway through Iyakei Gorge marked the first time the inhabitants of Iya became properly connected with the rest of the world that wasn’t via a mountain pass trail. 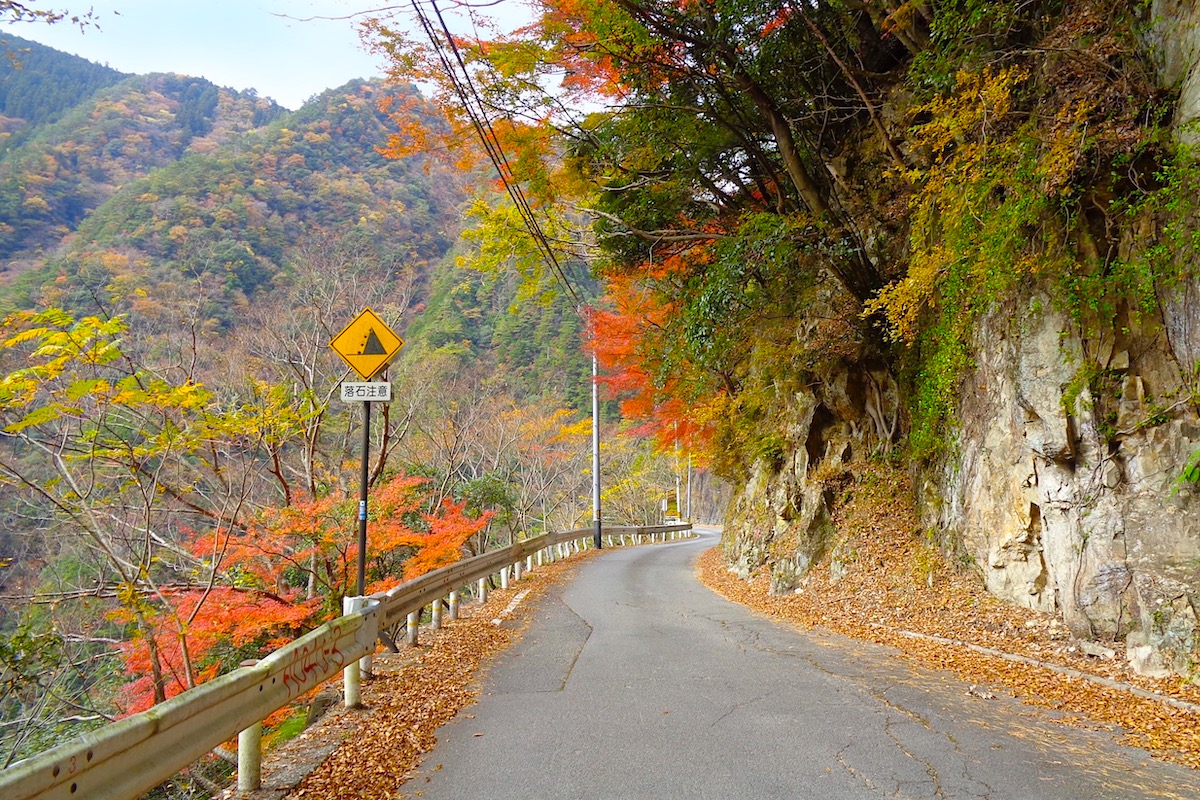 Due to the steep terrain, the construction of the road through the gorge took years. Initially only ox carts could pass, but eventually it was a route for forestry trucks hauling out trees as well as for local people traveling by public bus.

Today most people going to/from Iya use the wider and well-kept Rt 45 which goes over a mountain and through a tunnel between central Nishi-Iya and Oboke (for connection to National Rt 32), but the original Iya Highway is still treasured by the local people and visitors alike due to the fantastic scenery it offers and sense of nostalgic isolation it creates. 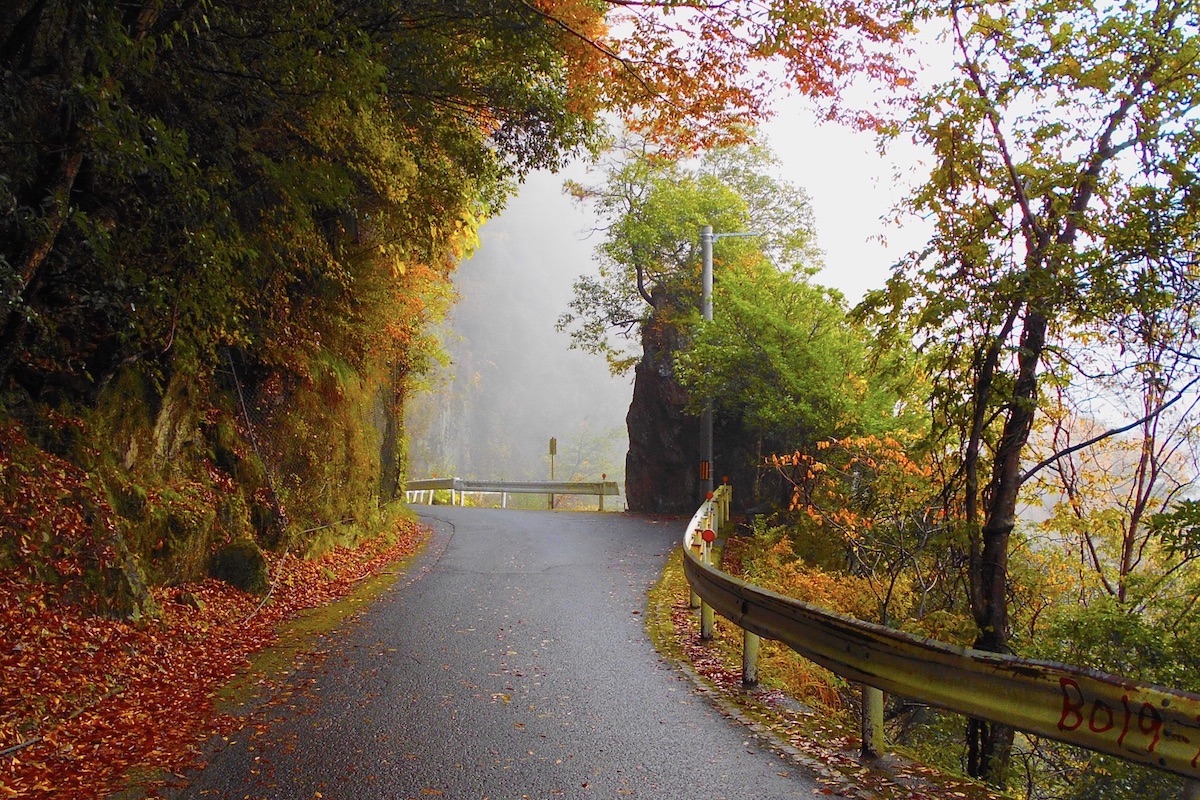 Taking in the views from Hi-no-Ji Bend

One of the most stunning viewpoints within Iyakei Gorge is known as Hi-no-Ji Bend (“Hinoji Keikoku”). At this point the meandering Iya River makes a few heavy curves through the mountains, such that its route looks like the Japanese letter “ひ” (pronounced “hi”, which sounds like the English word “he”). 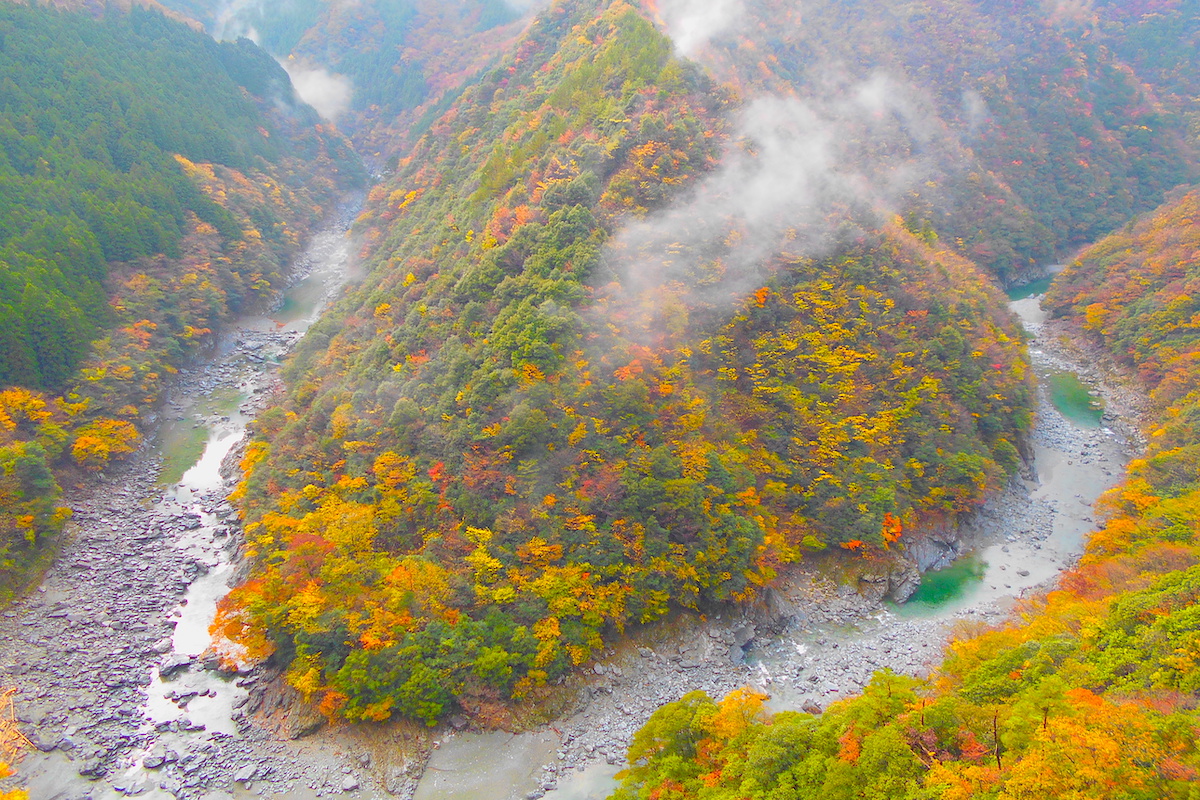 A viewpoint along the roadside provides a perfect view of this spot right in the center of the main curve. This breathtaking cliffside position lets you see right down to the river, over 100m below.

This area is particularly pretty in the autumn when the mountainside explodes in a range of colors. Usually the leaves through this area are at their best during the first two or three weeks of November. But every season offers a different view, with fresh blue-green foliage in the spring, dense greenery during the summer, and a snowy ink-painting-like landscape in the winter.

And even when it rains, at any time of the year, an extra layer of magic is added by the wispy fog that often floats through this spectacular place.

In Part 2 we find out more about other spots in the Iyakei Gorge.
>>Iyakei Gorge in Autumn Part 2 | Stunning Viewpoints with a Peeing Boy

For more information about the Iyakei Gorge and the rest of the Iya Valley in English, see here: