Standing 1409m high on the border of the Oboke and Iya Valley sections of Tokushima’s Miyoshi City, Mt. Kunimi is one of the most easily accessed mountains in the area. With its name meaning “Country View”, Mt Kunimi offers panoramic views in every direction across the mountains of central Shikoku and beyond.

Setting out from Upper Kunimi Trailhead

The Upper Kunimi Trailhead is along a remote logging road, with stairs leading up from the roadside beside the trailhead sign. It is possible to drive here if you have a car or even take a taxi. 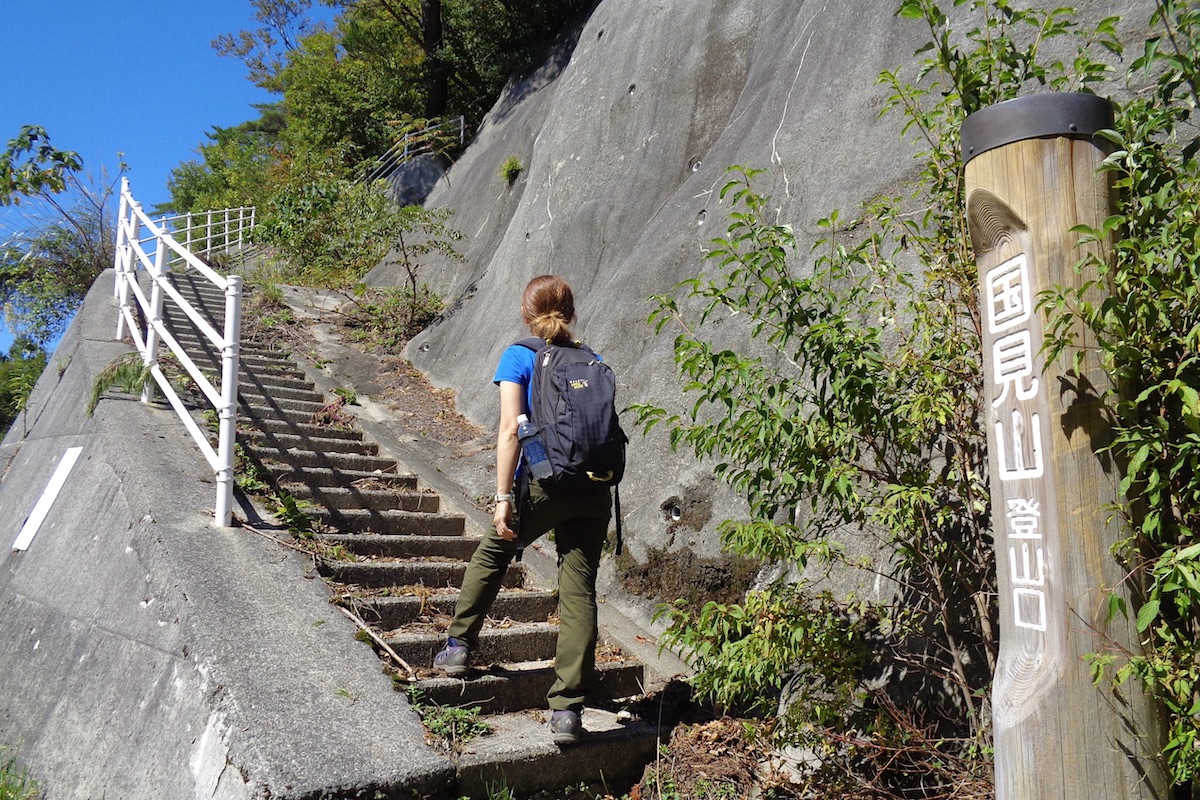 After a short break while taking in the view, I continued back on the trail. The Upper Trailhead is at an elevation of 1040 meters, and from here it takes a little over an hour to reach the top of Mt Kunimi.

Once atop the stairs of the trailhead, the trail then immediately goes back into the forest. It is constantly uphill from here and at times fairly steep.

The trail is easy to follow, and about 15 minutes into this section you will come to a particularly steep part.

It is not so steep that you need a rope, but it is somewhat grueling as it abruptly zigs and zags up for about 5 or 10 minutes through a wide space in the forest. 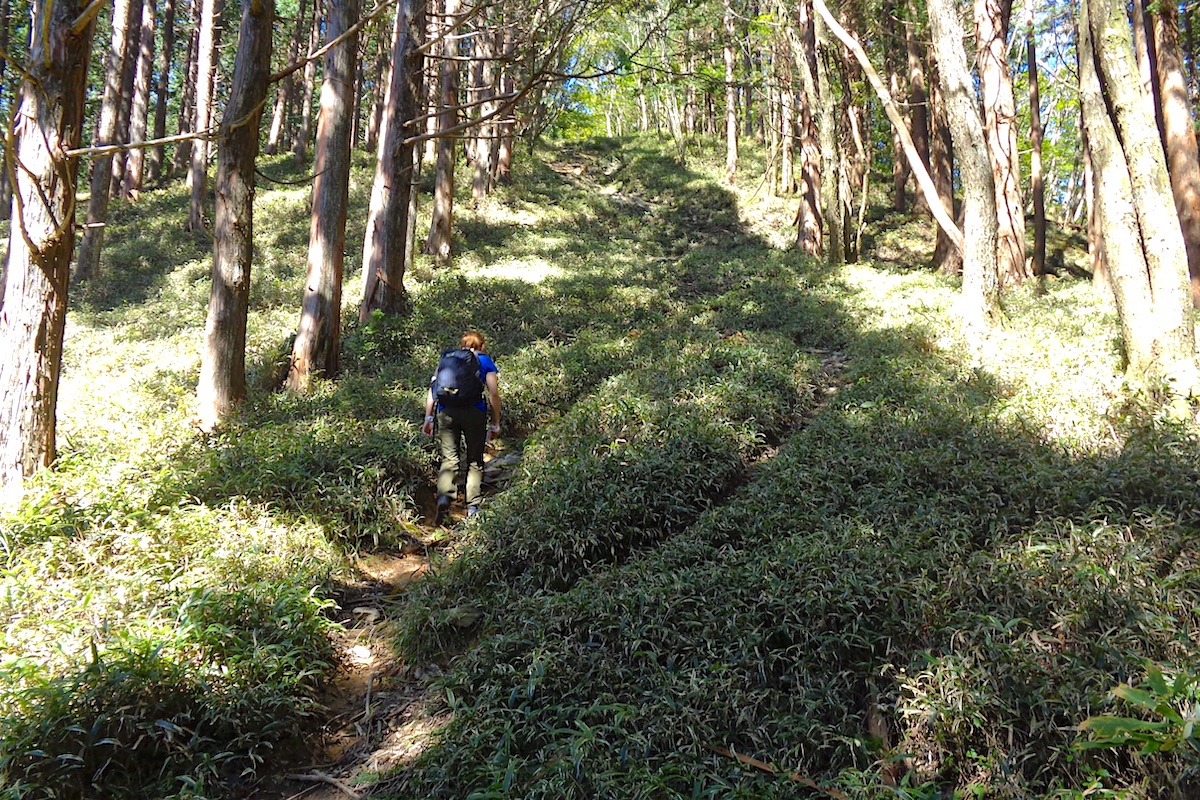 Once at the top, catch your breath, because about a hundred meters further along the trail you will reach another visually similar and equally steep section.

After getting to the top here you will surely be breaking a sweat. Have a drink, and then go another hundred meters to reach the third (and final!) annoyingly steep and once again oddly similar section of trail.

A tranquil trail to Kunimi Shrine and hut

At the top of the third steep part, you will see a sign pointing off to the left for Kunimi summit.

It is another 20 minutes to the top of Kunimi, but the rest of the hike from here is not just much more level but it is also stunningly pretty. 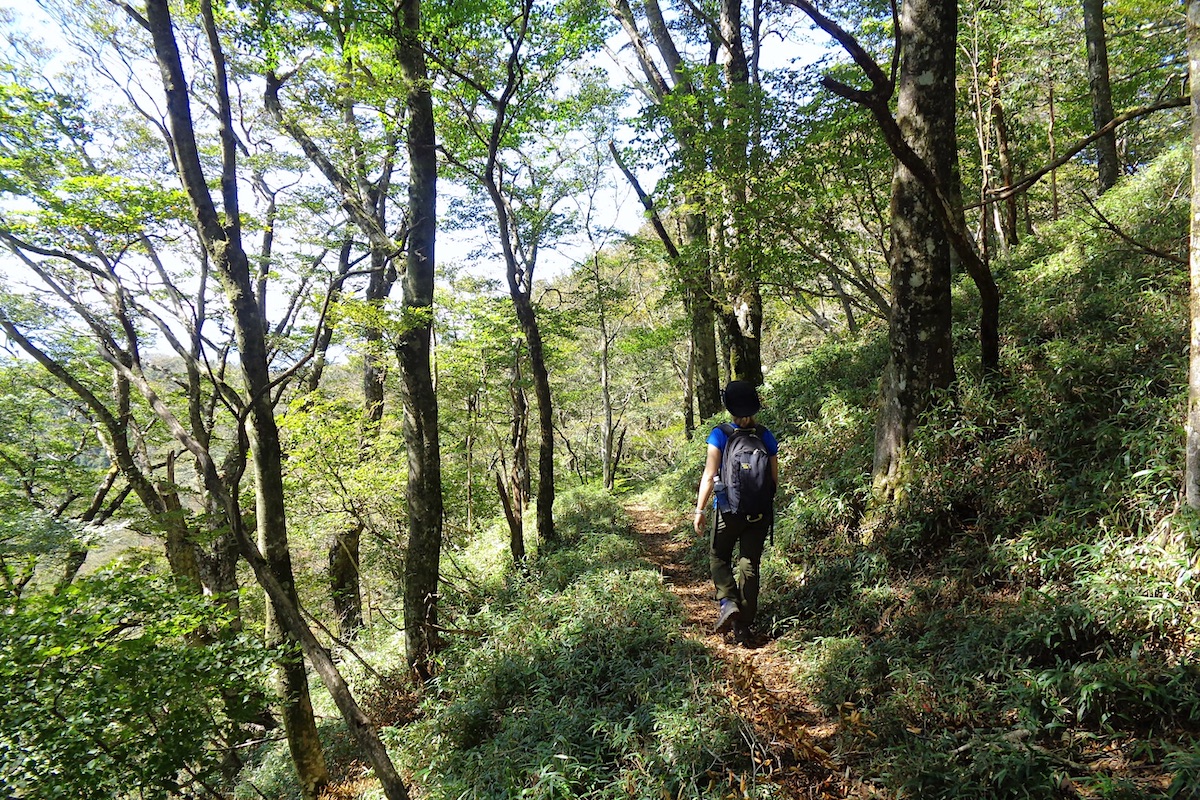 In the mid autumn (mid October to early November) the forest along here is full of colorful leaves, but no matter what time of year you come it is still charmingly beautiful. The natural tranquility makes hiking up those dreadfully steep sections all the more worth it.

As you get close to the summit you will come upon the peaceful Kunimi Shrine, which has a collection of stone sculptures that are set within a craggy boulder area. 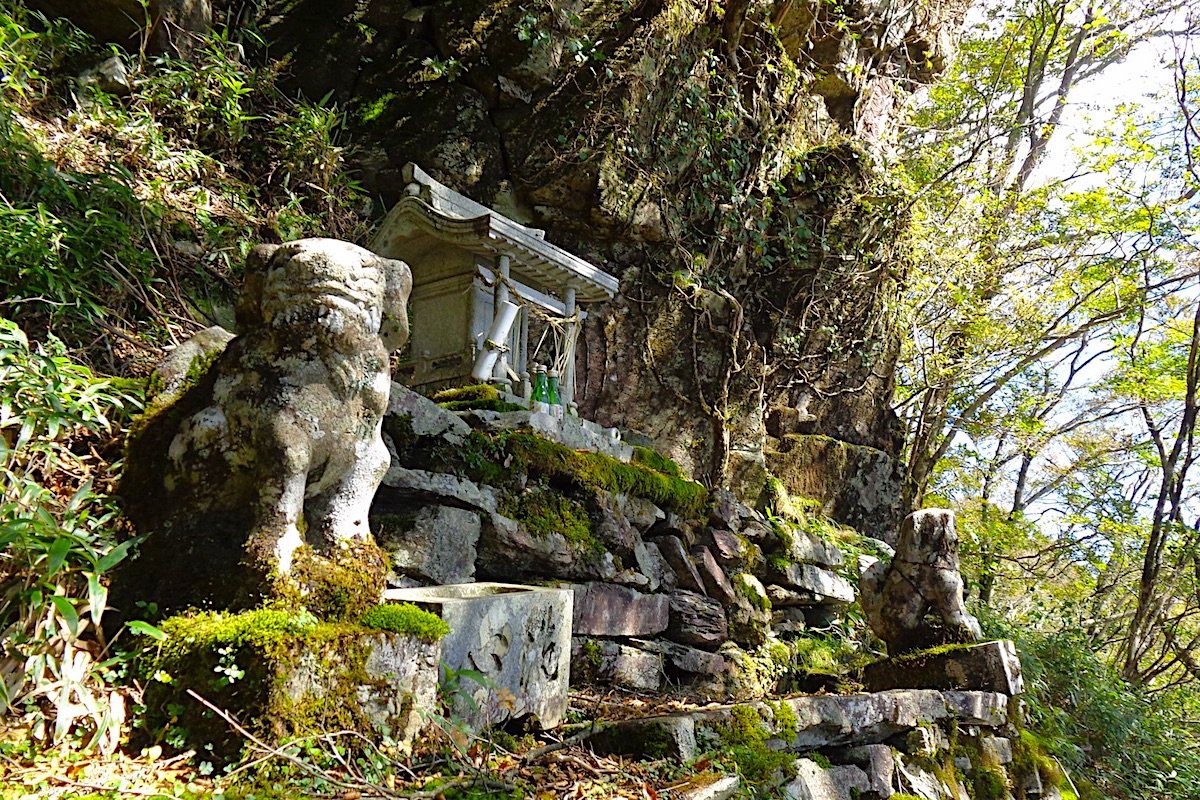 Just beyond the shrine is the small Kunimi emergency shelter hut. It just looks like a shed, but it is unlocked and a place to take refuge in case a strong storm suddenly appears. 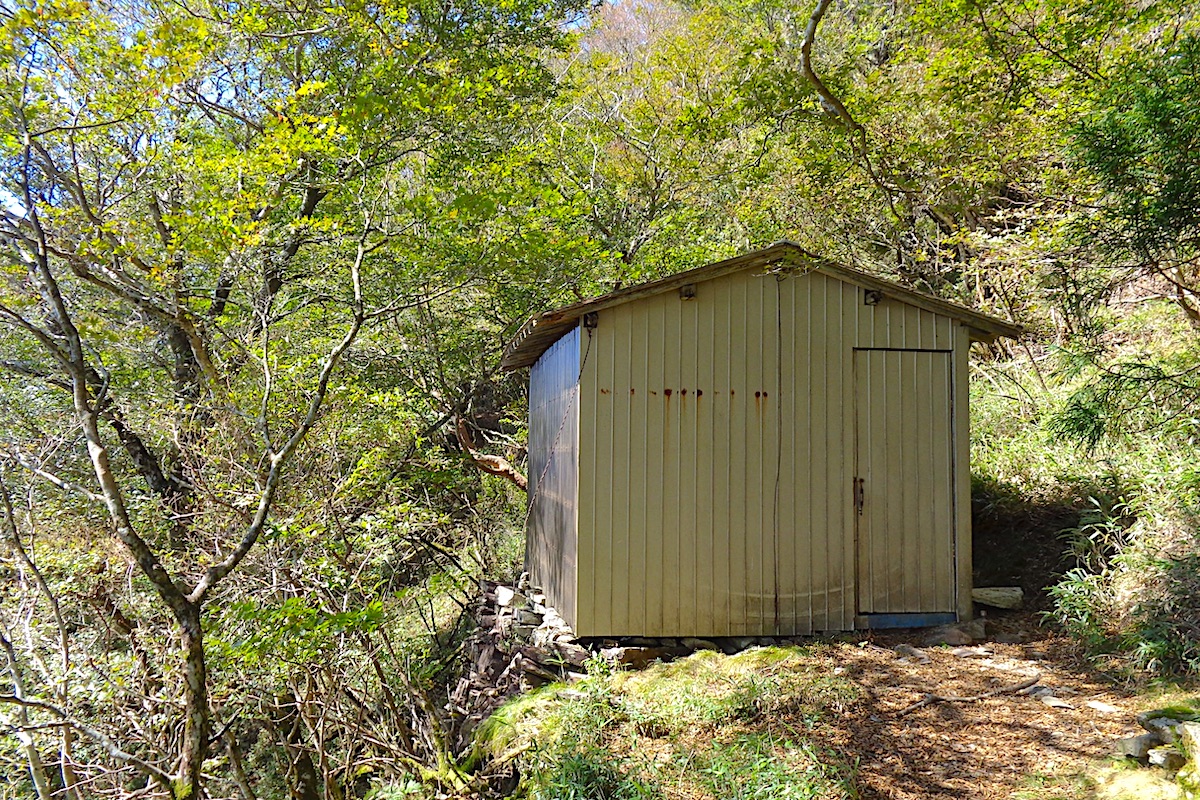 Many such mountain shelter huts elsewhere are common for people to camp in overnight, but the tiny Kunimi Hut is pretty dank and is probably only suitable for an emergency. But there is a rocket stove inside in case you are desperate and freezing. 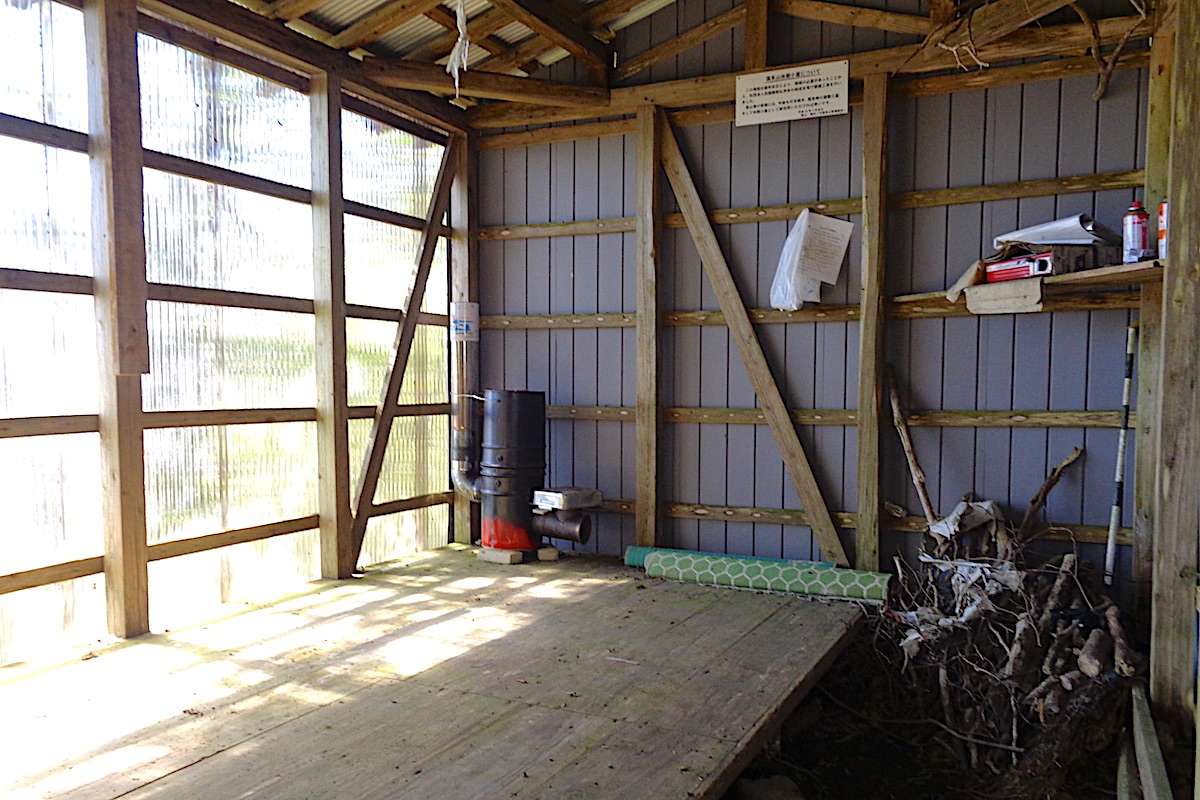 The trail continues for another couple minutes past the hut. At one point you will reach a couple signs marking a split in the trail. 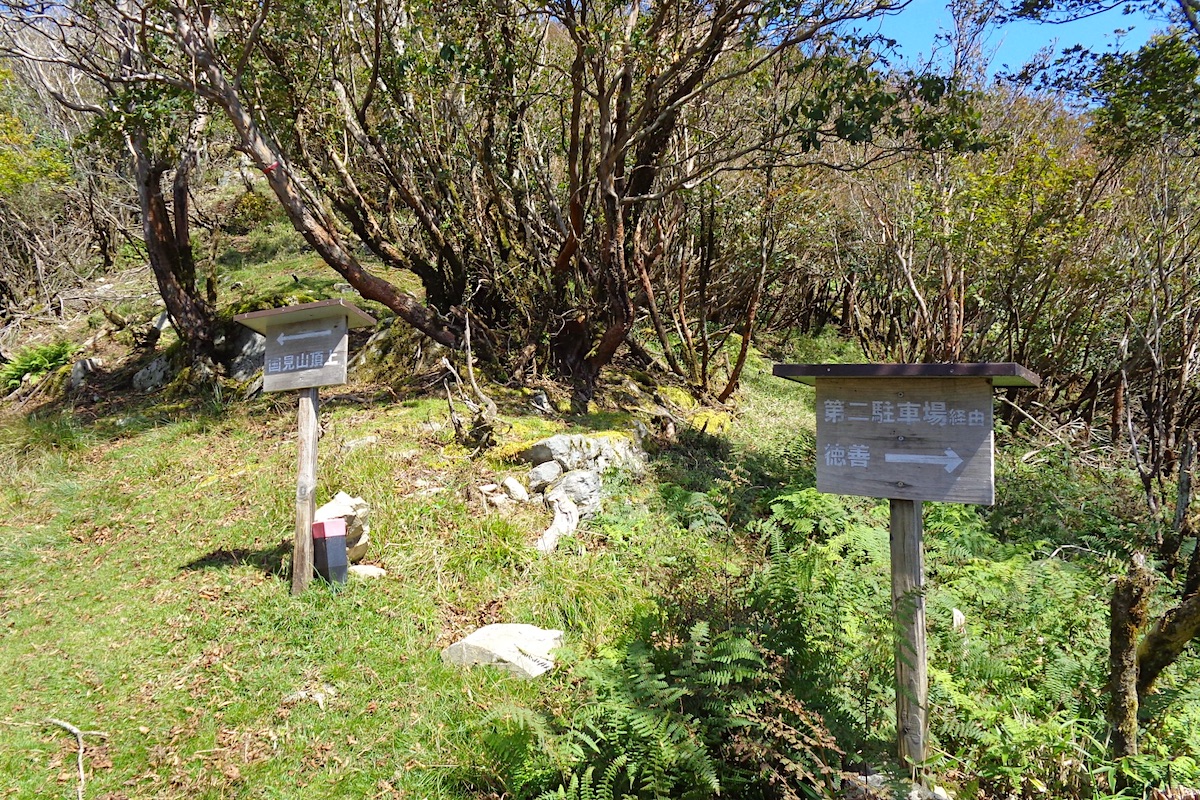 Going down goes along the “Old Kunimi Trail” back to the logging road and then eventually down to Oboke Station (this route is explained in Part 3). Going up leads to the summit of Kunimi, which is just a minute or two away.

Just before reaching the 1409 meter top of Mt Kunimi the trees open up to reveal fantastic views in every direction. Indeed, the mountain certainly lives up to its name of “Country View”! 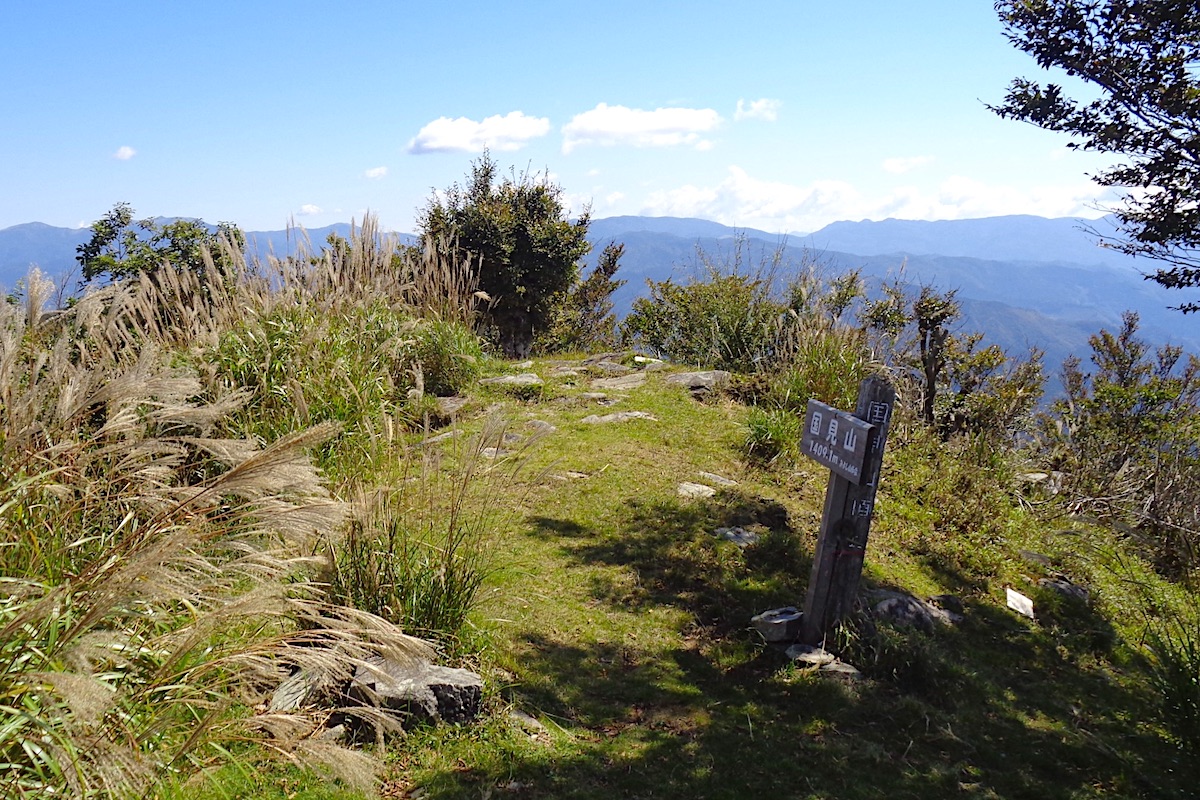 Enjoying the views across central Shikoku and the Iya Valley

A silver metal plaque can be found on the grassy summit which points out the names of mountains that can be seen in the distance. 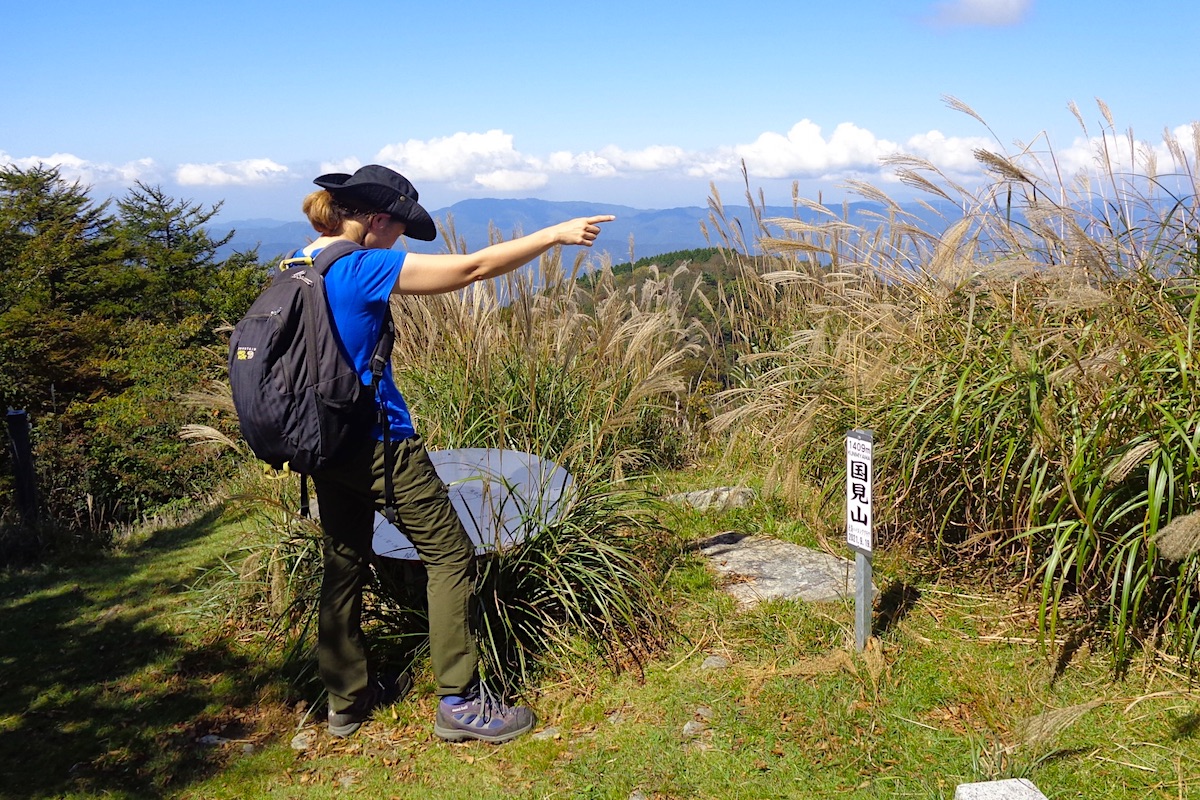 It was a fairly clear day when I went, so Lake Ikeda and the highway bridge above it were easily visible about 14 km to the north and Kotohira City in Kagawa Prefecture could be faintly seen further beyond. Far off to the west I could see the mountains surrounding Mt Ichizuchi in Ehime prefecture, and looking south gave a broad view up the Yoshino River Valley into Kochi Prefecture. 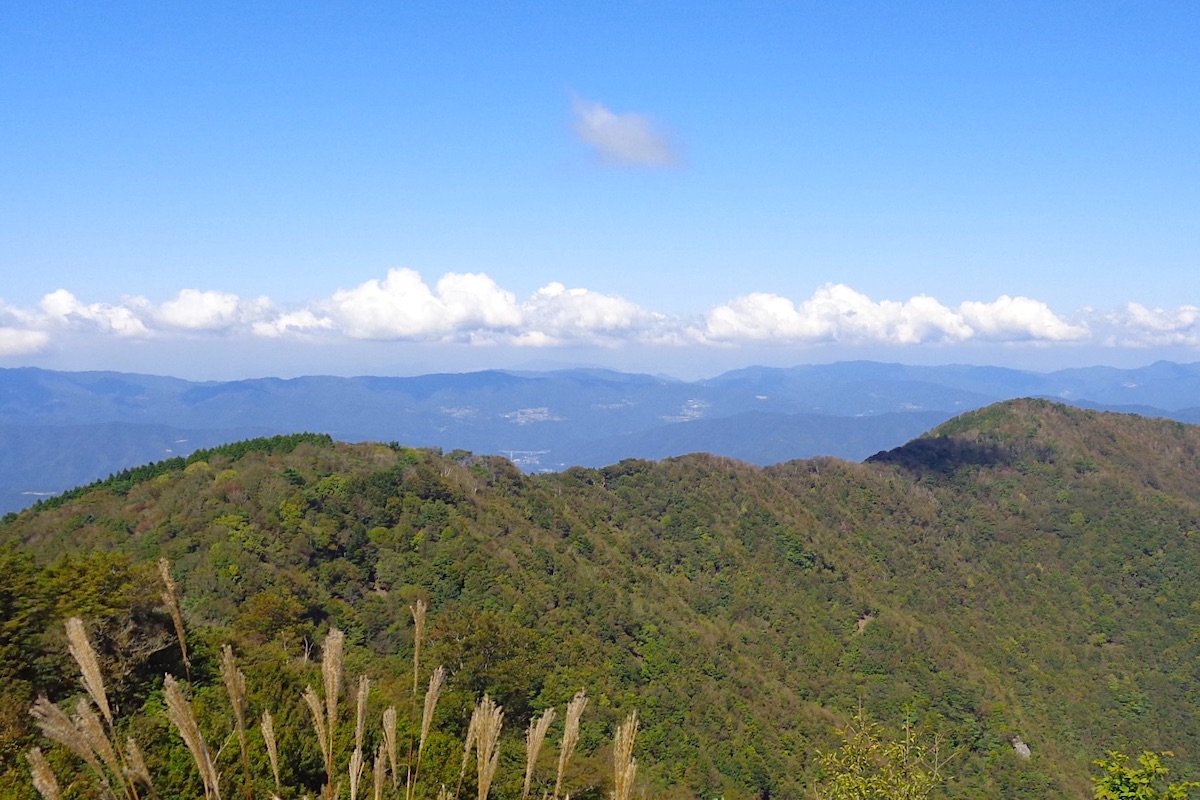 But the view looking out to the east into Tokushima Prefecture across Miyoshi City’s Iya Valley was the most superb. Aside from neighboring Mt Nakatsu, all of Iya’s many mountains were easily seen, including the pyramid top of Mt Tenguzuka peaking over the ridge, the bold top of Mt Miune, and the wedge-shape top of Mt Eboshi. 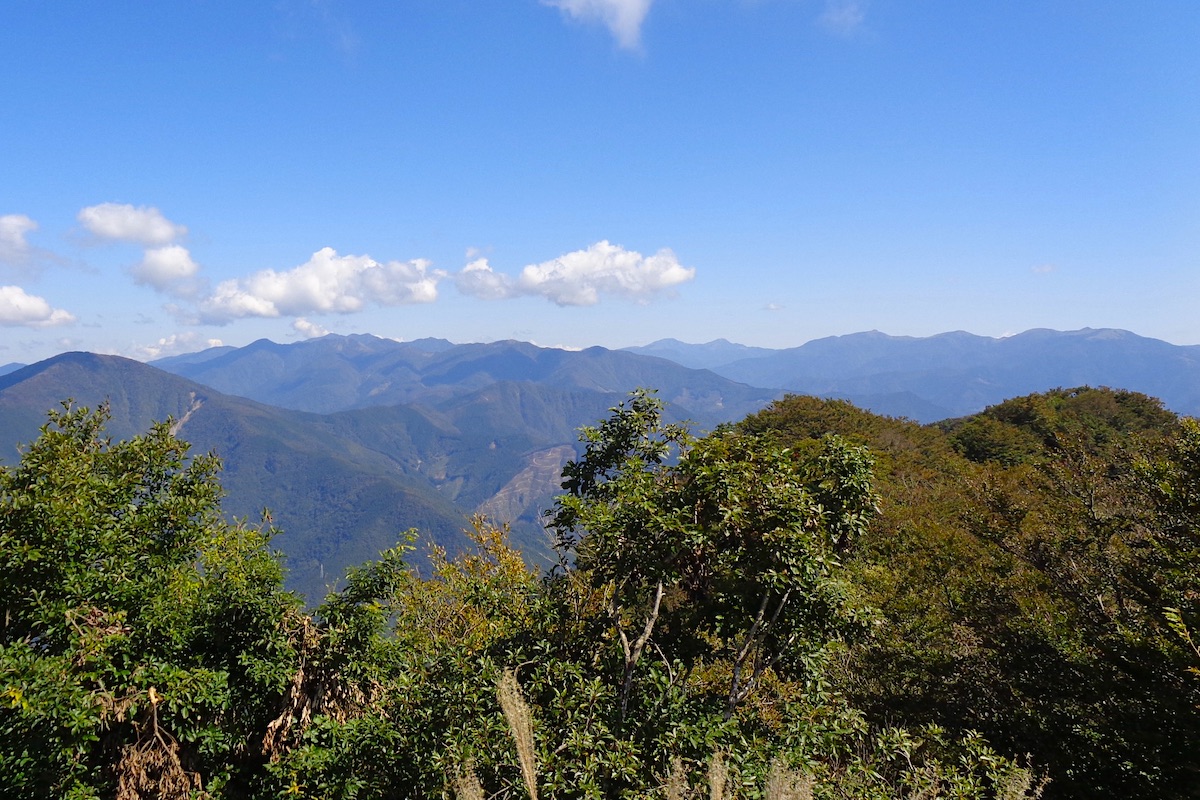 And since the eastern view looks straight up the Iya Valley, far off in the distance and framed in the middle, Mt Tsurugi and neighboring Mt Jirogyu were also clearly visible, which was impressive since they are about 30km away!

In Part 3, I descend down the Old Kunimi Trail for a long hike back to Oboke Station.

For hiking maps and trail info in English, check the Mt Kunimi section of the IyaTime website’s Hiking Portal

For local bus schedules, check the IyaTime Bus Timetables page (the bus stop for Kunimi Lower Trailhead is listed as “Touge” on here)