Located deep within the mountains of central Shikoku, Miyoshi City’s Iya Valley is renowned for being a hidden region cut off from the rest of modern Japan. Here can be found Kouya, a traditional thatched-roof farmhouse that offers slow cooked local-style meals, stunning architecture, and various hands-on activities. If seeking a one-of-a-kind lodging experience, this is it.

Discovering the traditional tastes of the Iya Valley

Probably the first thing that captivates visitors to Kouya is the beautifully restored building itself. And while there are other historic homes and guesthouses in Iya which offer similarly stunning architecture, where Kouya separates itself from the rest is in their hospitality, particularly with their meals. 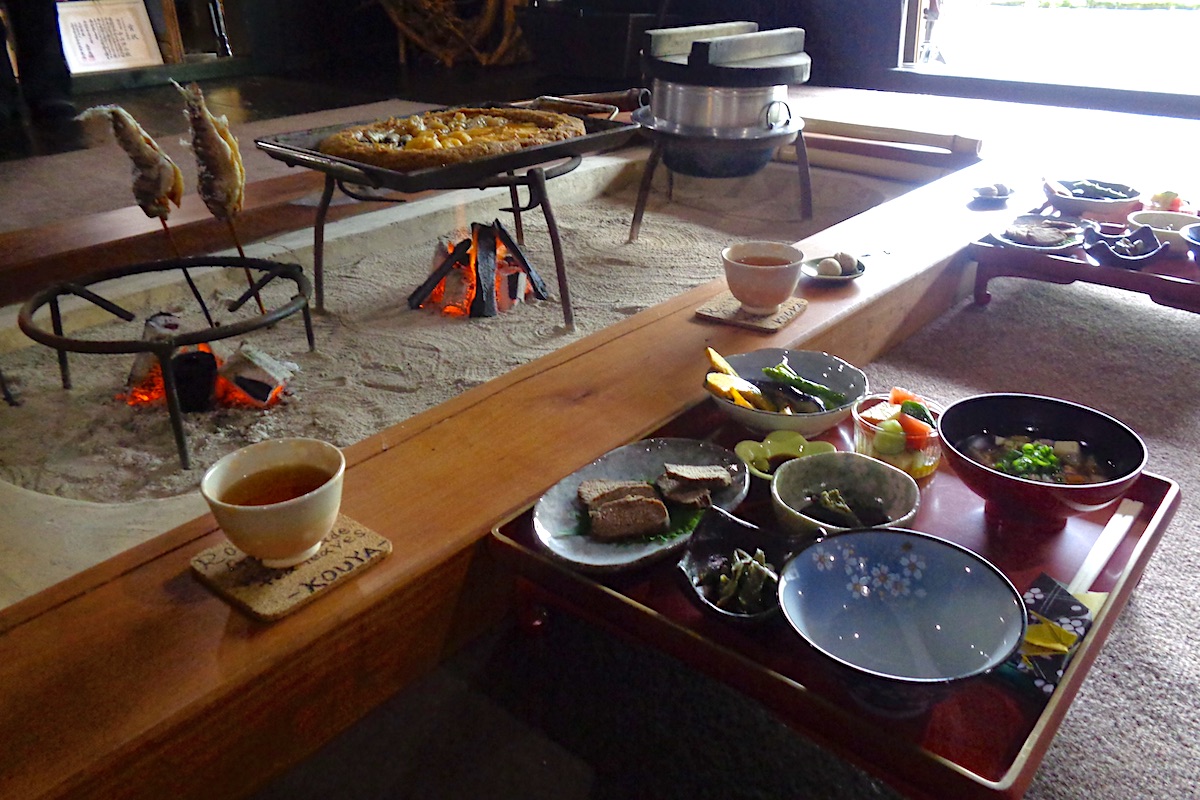 Visitors are quickly made feel like one of the family, so it’s no wonder that they have many repeat customers. Actually, it can sometimes be hard to make a reservation because they only accept one group (up to 7 people) at a time, and most stay 2 or 3 nights in order to properly appreciate both Kouya and the Iya Valley. 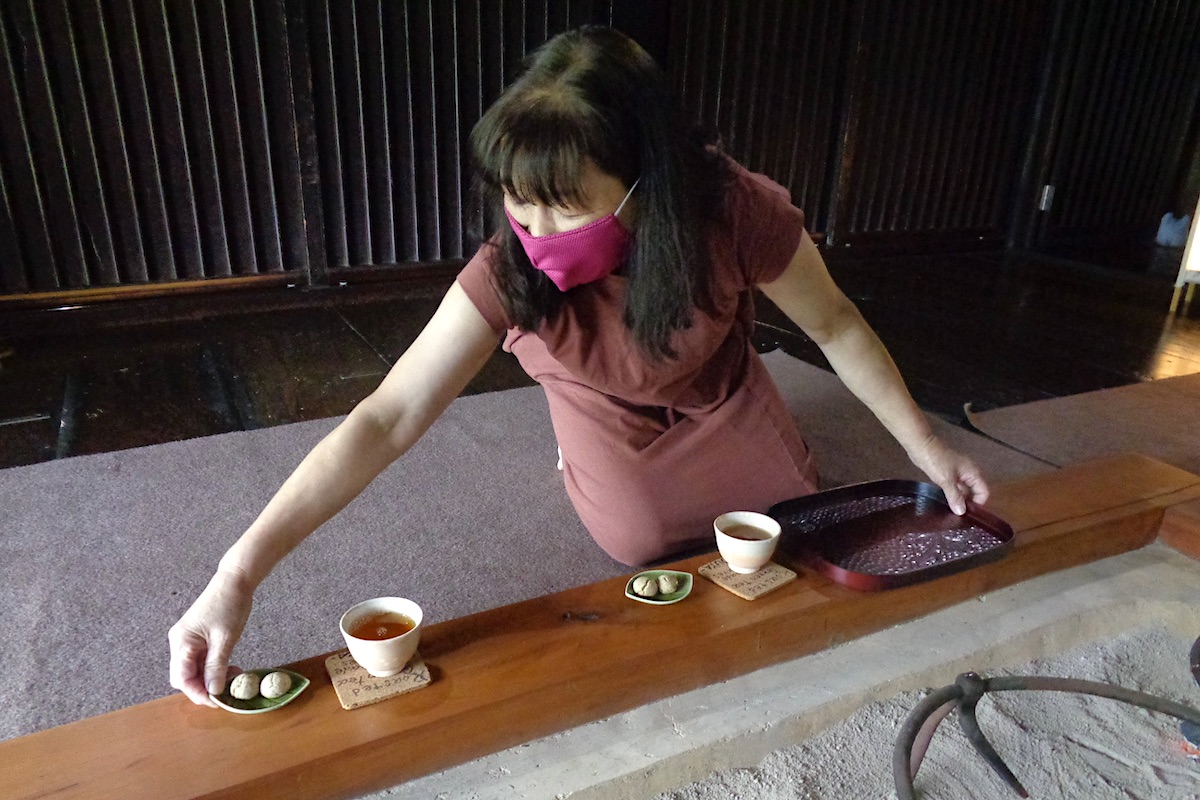 And all agree that the traditional Iya food made here with local ingredients is beyond compare, not just with the taste but also with the interactive old-time preparations which you can’t really find anywhere else.

Home is where the hearth is

In traditional Japanese homes, the center of the house is the floor hearth (called “irori”) and around it is where families socialize, cook, and generally convene. The Koyua house has two irori, and around these is where visitors and the hosts will spend much of their time.

The main irori is quite large and within it smokeless charcoal is burned for cooking traditional Iya meals in the same way that had been done for centuries. 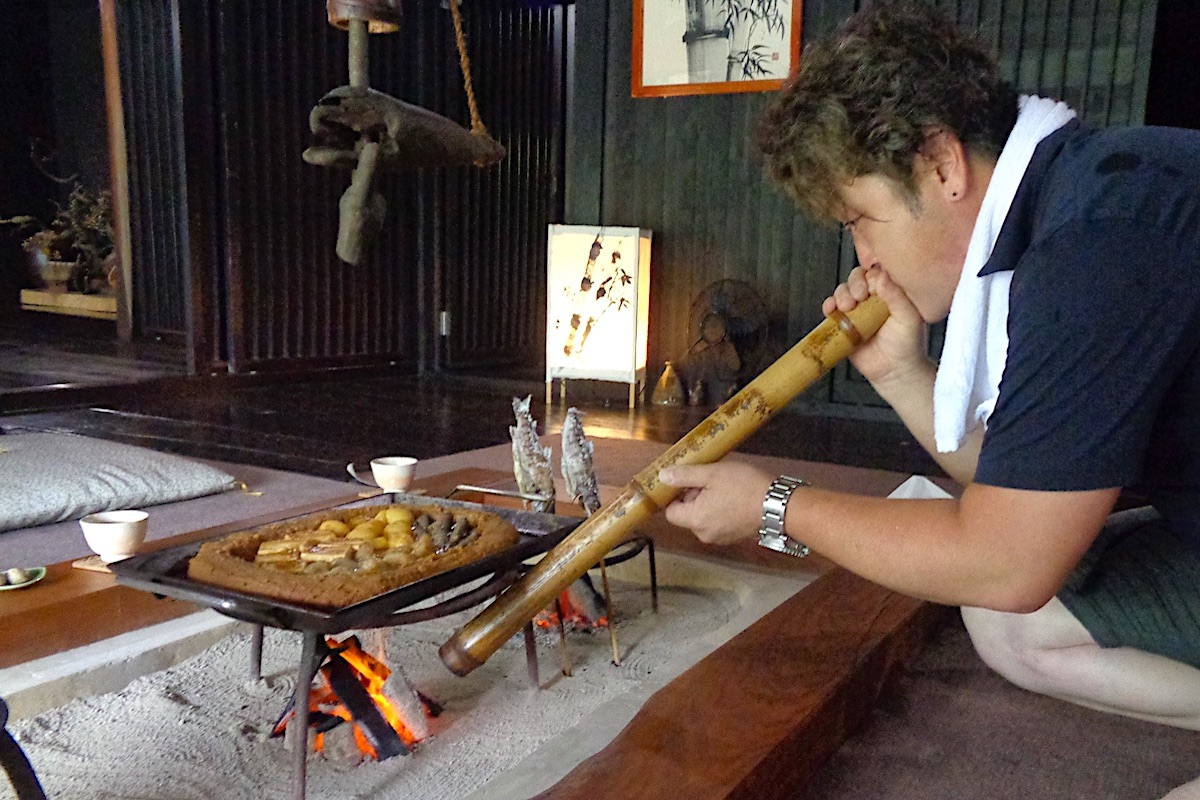 Shintsuke showed me how to use a traditional bamboo blowing pipe so that the charcoal would heat to the proper temperature.

One of Iya’s most notable intrinsic dishes, which is nowadays a rather hard to find, is hirara-yaki, which means “flat barbecue”. Usually made for celebrations on a large flat stone heated by fire, it can also be prepared upon an iron griddle, which is what we did over the irori at Kouya. 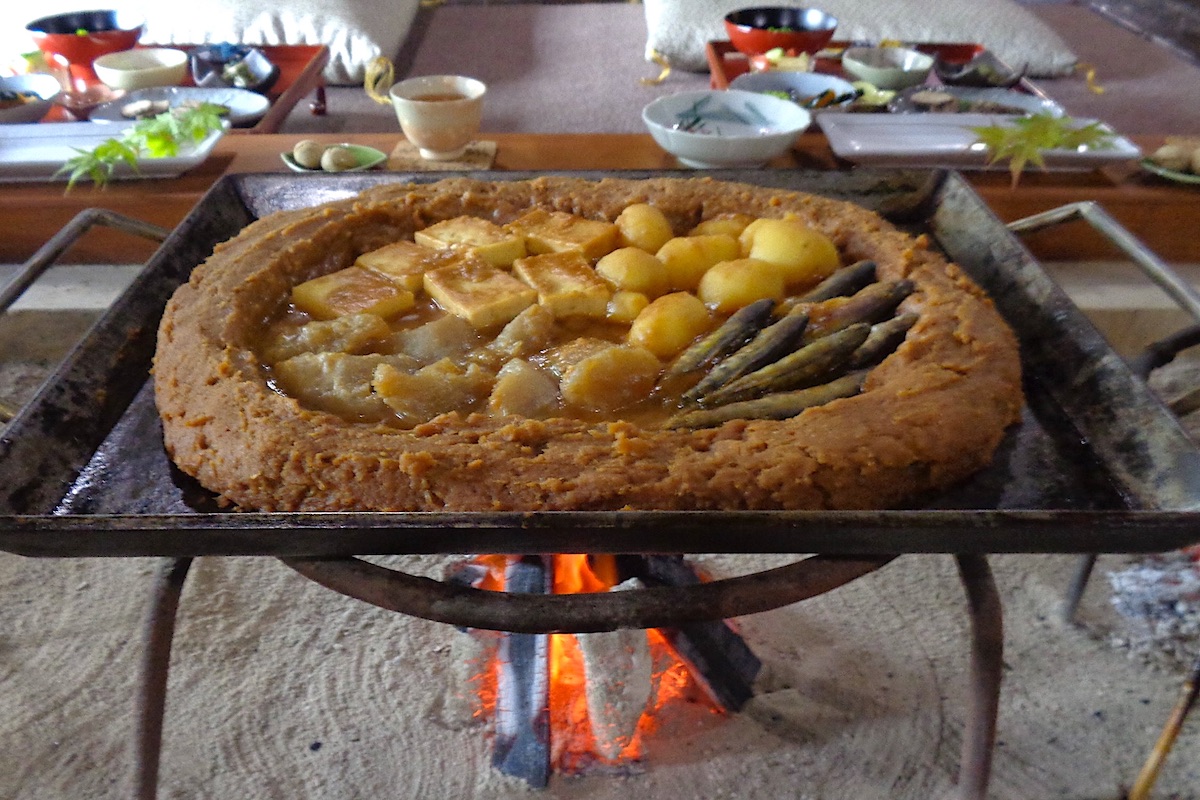 To make, a thick wall of miso paste is first ringed around the outer edge, then within a variety of local ingredients is put in including young river trout (“amego”), the dense local “stone” tofu, the even denser small Iya potatoes, and handmade konjac gelatin (“konnyaku”). Some sake is added, which then seeps into the outer miso wall to creates a thick broth that slow cooks everything and results in a deep flavor unlike anything you’ve ever had.

And though it we didn’t have it this day, another local dish cooked over the irori they also serve is a large hotpot made with assorted vegetables and locally hunted wild boar meat.

Enjoying the range of Iya flavors

As mentioned, the hospitality at Kouya is exceptional, and a full spread of dishes is also served which provide a variety of local tastes. 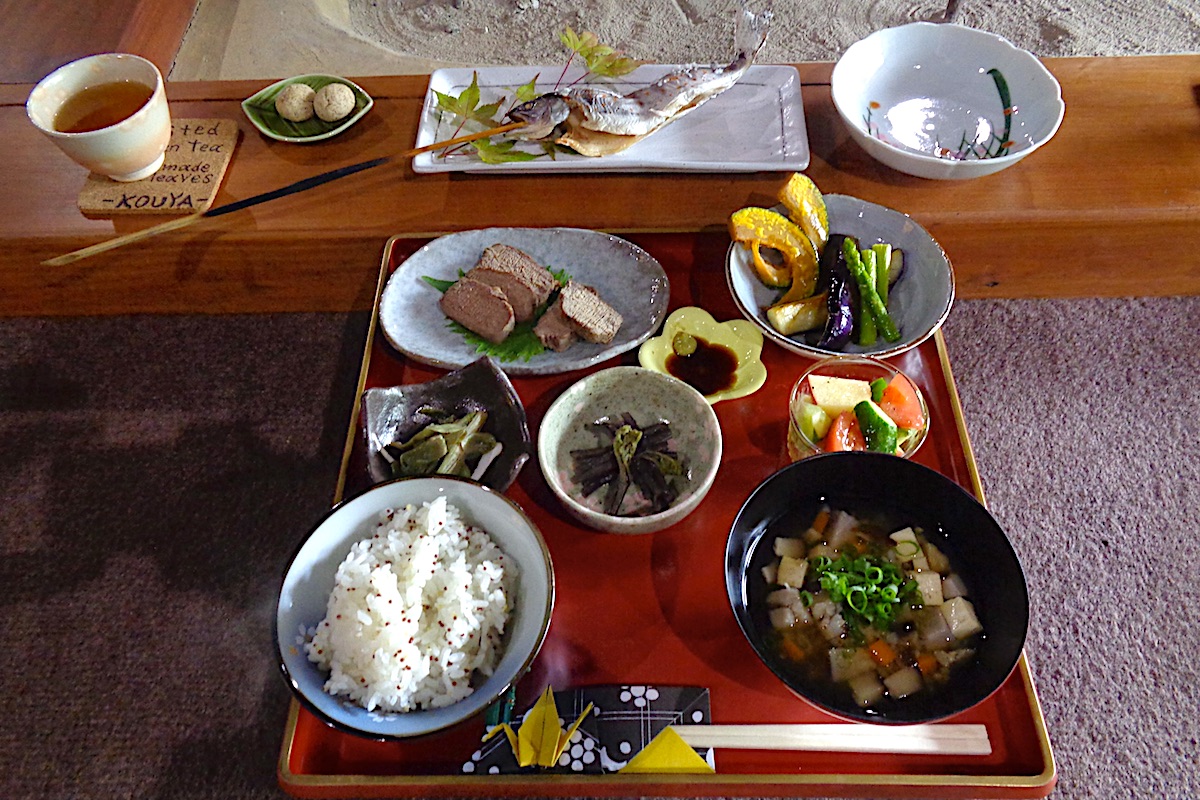 Slices of roasted venison are particularly enjoyable with a bit of wasibi and soy sauce. Wild mountain sprouts (“san-sai”) which were gathered from their fields offer a delicate and highly prized flavor. And other vegetables freshly picked from their farm fields are served in various ways. Due to using such fresh ingredients, the menu usually changes with the season,

Another treat was the traditionally prepared rice which is cooked in an old-time “hagama” pot. Within it they also mix in a couple different types of millet, which was historically done in Iya because it was much easier to cultivate millet upon Iya’s sloping mountainside fields than rice. 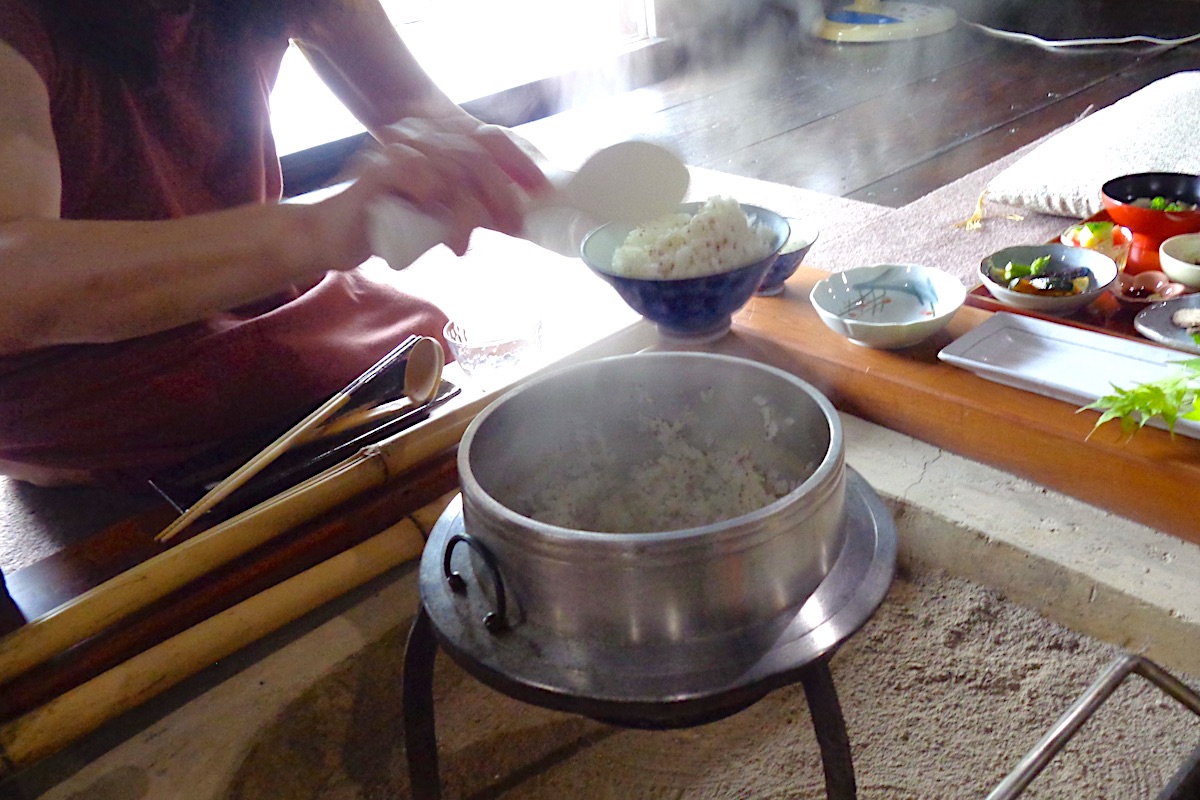 One of the most renowned foods of the Iya Valley is soba (“buckwheat”), which is like millet in that it was historically easier to grow on the hillsides. Most people who visit the valley usually have their soba served as noodles, but at Kouya they prepare the buckwheat in a home-style method found only in Iya. 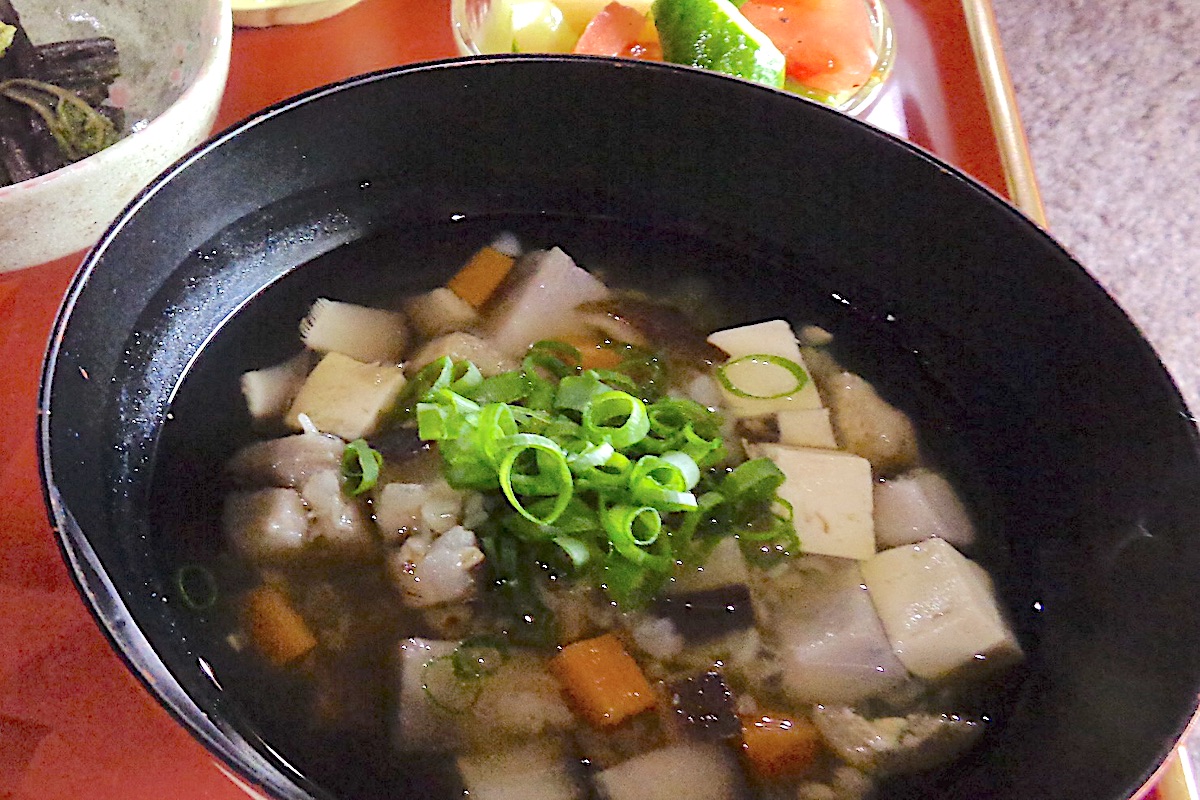 Instead of grinding up the buckwheat to make flour, the whole grains are instead used to make a thick porridge (called “soba-gome”). This hearty stew includes lots of other vegetables and it was eaten in Iya for celebrations and other large gatherings. It’s rare to ever see it on a restaurant menu and only ever cooked at home.

Back at the irori, the fish was just about ready. For over two hours the plump “amego” river trout had been slowly roasting on skewers around the glowing coals. 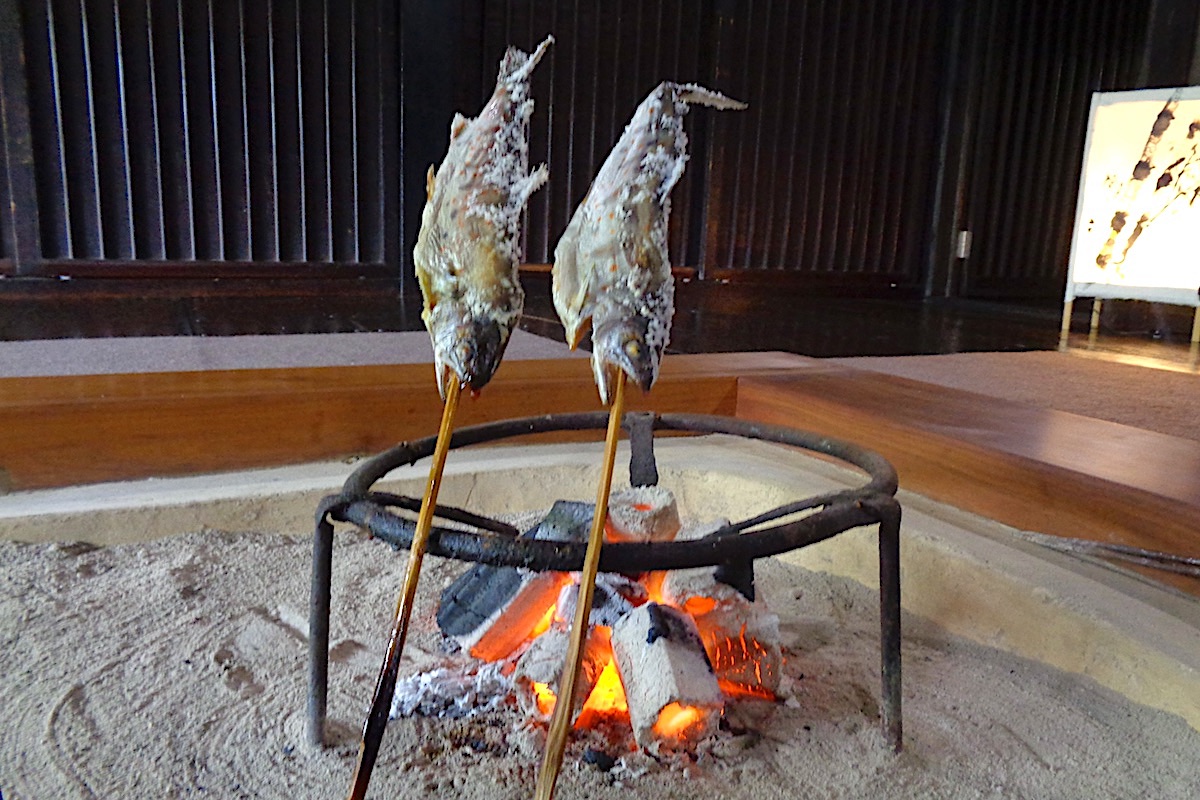 Timing it just right can be a bit tricky, so the family at Kouya needs to arrange with the customers based on their arrival time (so don’t be late!). But the slow-cooked results were indeed worth it, offering a juicy yet crispy taste. Eaten right off the skewers, it is simply flavored with only some salt, which allows the deep taste of the fresh fish to be fully enjoyed.

Inheriting the traditions of Iya cuisine

Many customers who visit enjoy preparing the meals together with the hosts, but helping out isn’t required and you may just prefer to relax and relish in their superb hospitality.

Mari and Shinsuke are excellent cooks and each have their own specialties and skills for putting the different dishes together. Mari’s mother, Kumiko, was their instructor, and she is particularly happy to have passed on her knowledge to the next generation. 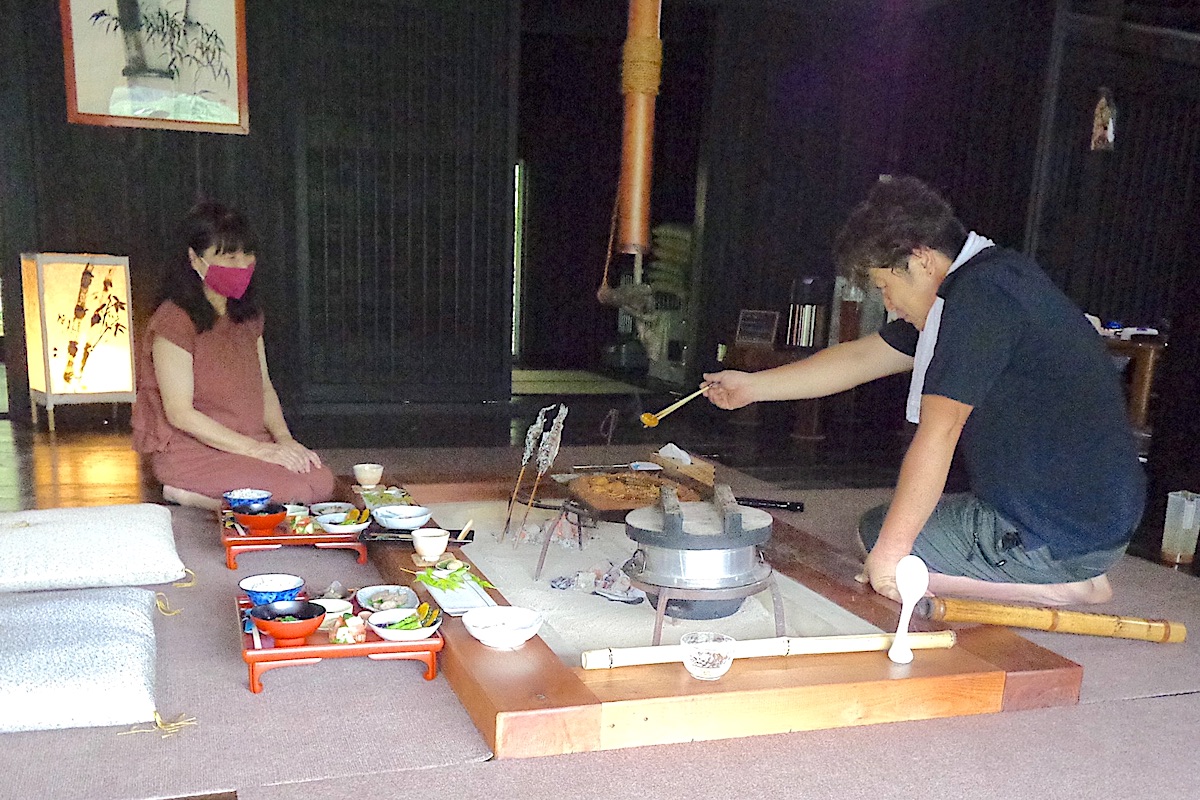 “At first I had to help them a lot”, explained Kumiko, “but now they don’t need me anymore. I’ve become rather impressed with their abilities and results”.

Indeed, “tradition” isn’t just a word to describe things at Kouya, it’s the way of life.

In Part 3 we find out what activities await at this lovely guesthouse.