Known as one of Japan’s three hidden regions, the Iya Valley in Tokushima’s Miyoshi City is also known as being the home to the Iya-no-Kazurabashi Vine Bridge, which is one of Japan’s most unique bridges. In this article we explain all you need to know about visiting this famed bridge, including surrounding sights, facilities, and local foods on offer!

The three remaining “Kazurabashi” of Iya

In many ways the Iya Valley is a place lost in time, with its traditional hillside hamlets, panoramic views, and charming people. But perhaps the most famous feature of Iya are the “kazurabashi” foot-bridges which are entirely made of vine and only found in this valley. 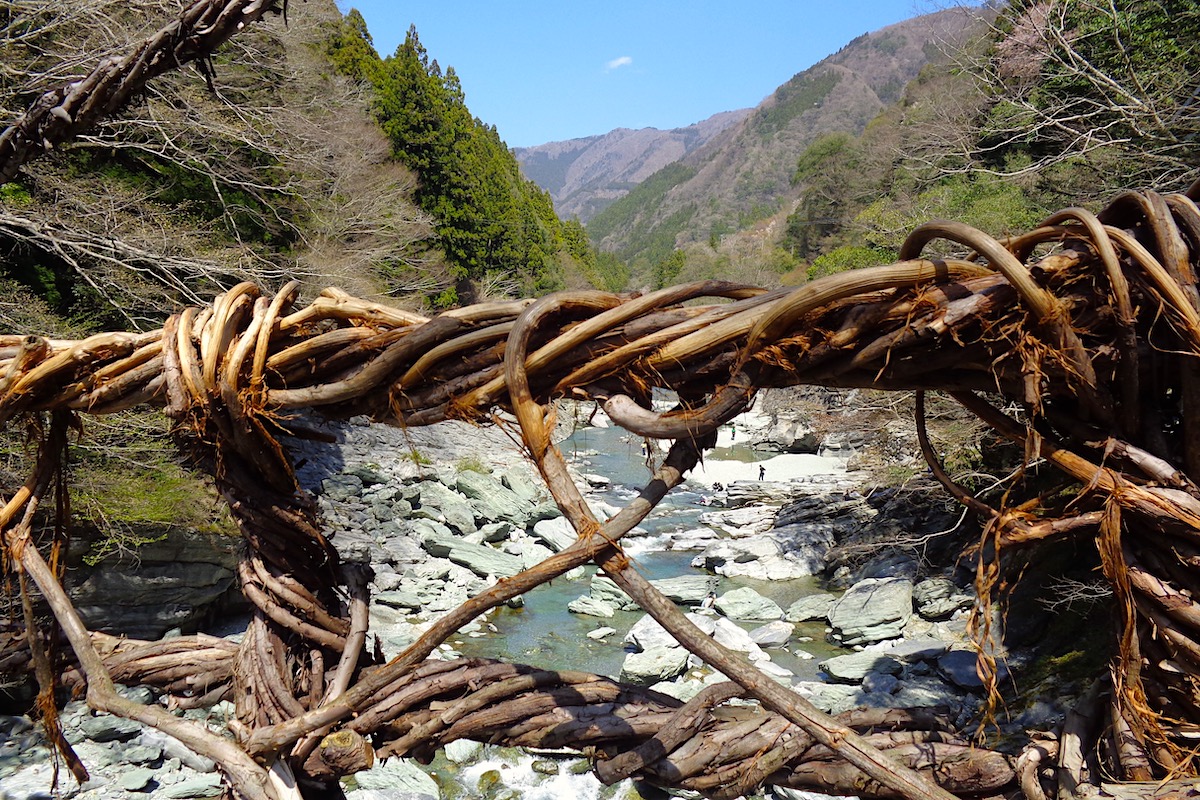 It is understood that at one time as many as thirteen of these naturally conceived marvels spanned the Iya River, but in modern times only three vine bridges remain.

Two of them (the twin Oku-Iya Niju Kazurabashi) are located at the farthest end of the valley, but in the central part of the Iya Valley in Nishi-Iya (West Iya) is the amazing Iya-no-Kazurabashi, which is both larger and more easily accessible than the other two. 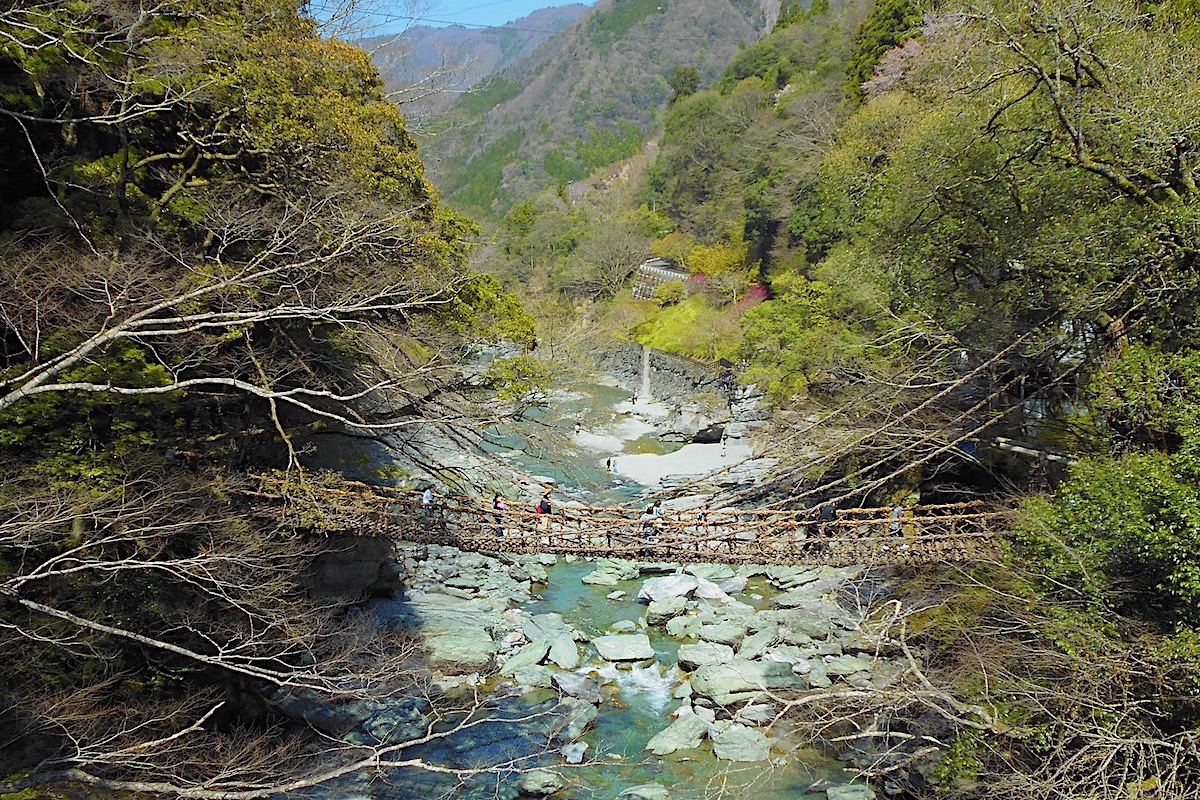 The origins of the Kazurabashi

For certain, the Iya-no-Kazurabashi is impressive. Measuring 45 meters long, 2 meters wide, and hanging 14 meters over the river, about 6 tons of vines from the surrounding mountains were used to build it. 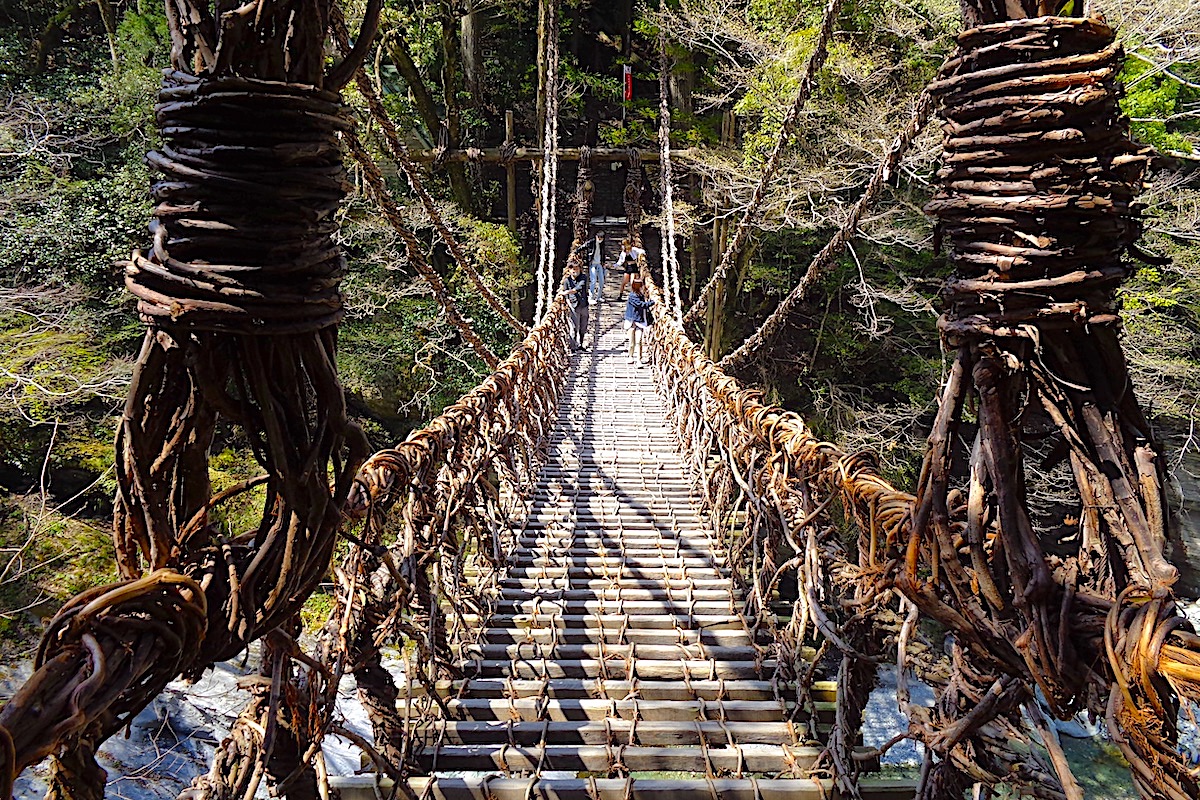 Aside from being considered one of Japan’s 3 Most Unique Bridges, it is also registered as a Nationally Important Cultural Property due to both its historic and engineering significance.

Nobody really knows how the people of Iya came up with the idea of vine construction. Some say that the esteemed monk Kobodaishi (who established the Shikoku 88 Temple Pilgrimage) created the idea when he supposedly came to Iya 1200 years ago, while others say that the bridges were the invention of the runaway Heike Samurai who came to hide in Iya 800 years ago and they built them with vine so that if those who were hunting them ever came then the Heike could readily cut away the vines to make an escape. 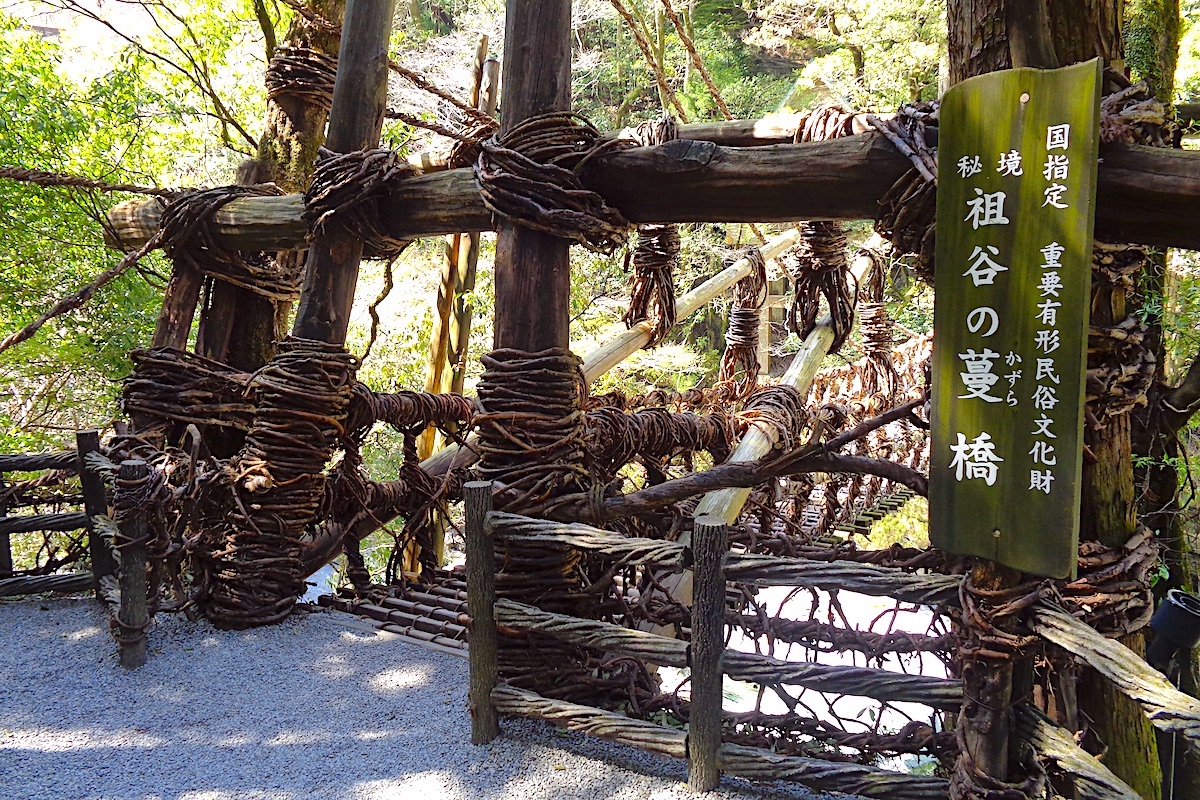 But whatever the origins, there is no doubt that the bridges are an endemic part of Iya’s culture.

The entrance to the bridge is quite formidable, and taking the initial step onto the bridge (as well as every successive step) is not for the faint of heart. 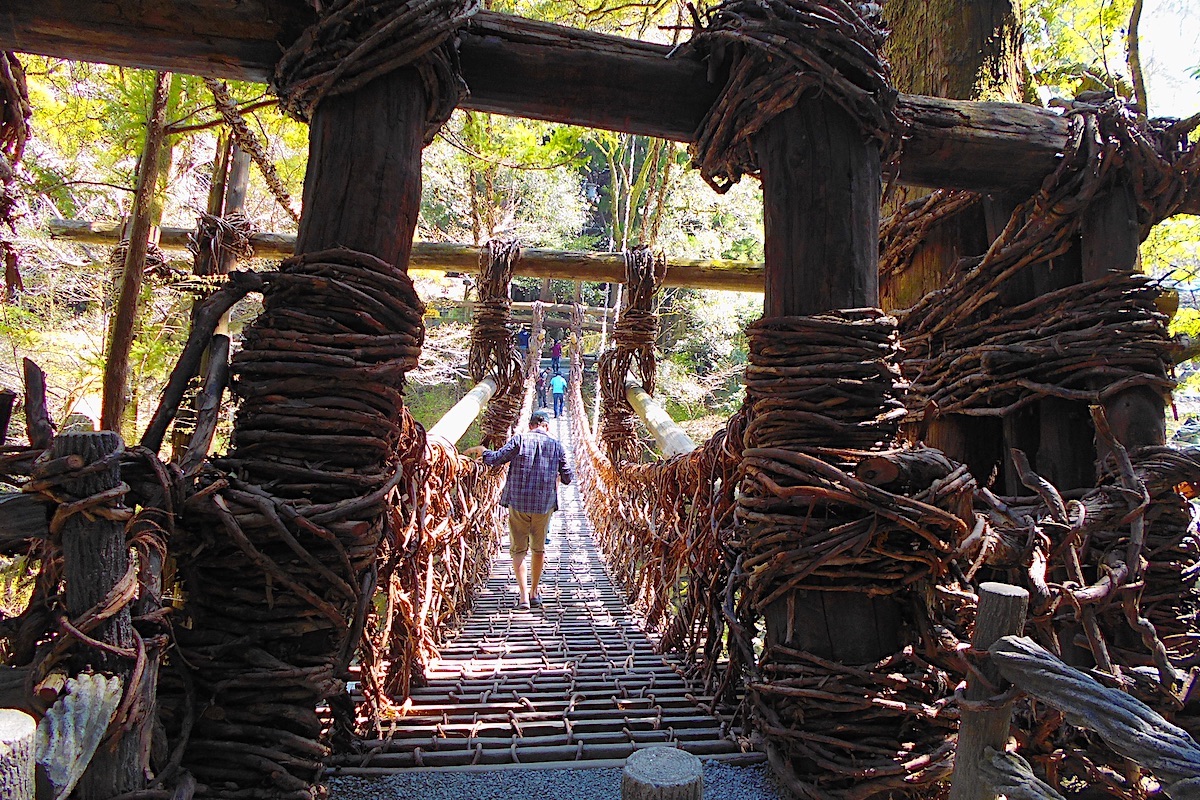 As I moved across, the bridge shook, the vines creaked, and other people on the bridge shrilled “I’m scared!”. As I slowly got closer to the middle it only swayed all that much more.

Aside from the squeals from both human and vine, the footboards, and particularly the wide gaps between them, only added to the anxiety while crossing. It was important to watch every step because even my large foot could have easily slipped between them. 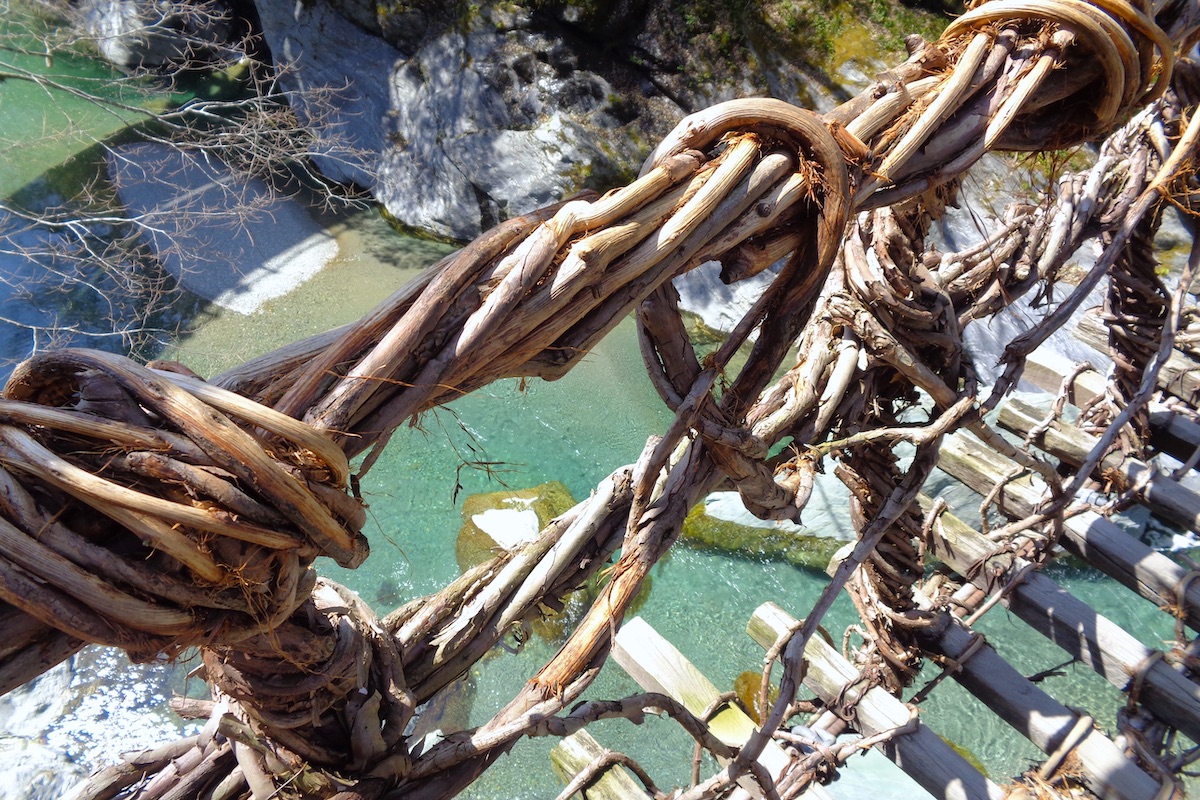 I watched the river flow by far below, and I wasn’t even half-way when I realized how it probably wasn’t too smart to make the crossing in sandals! 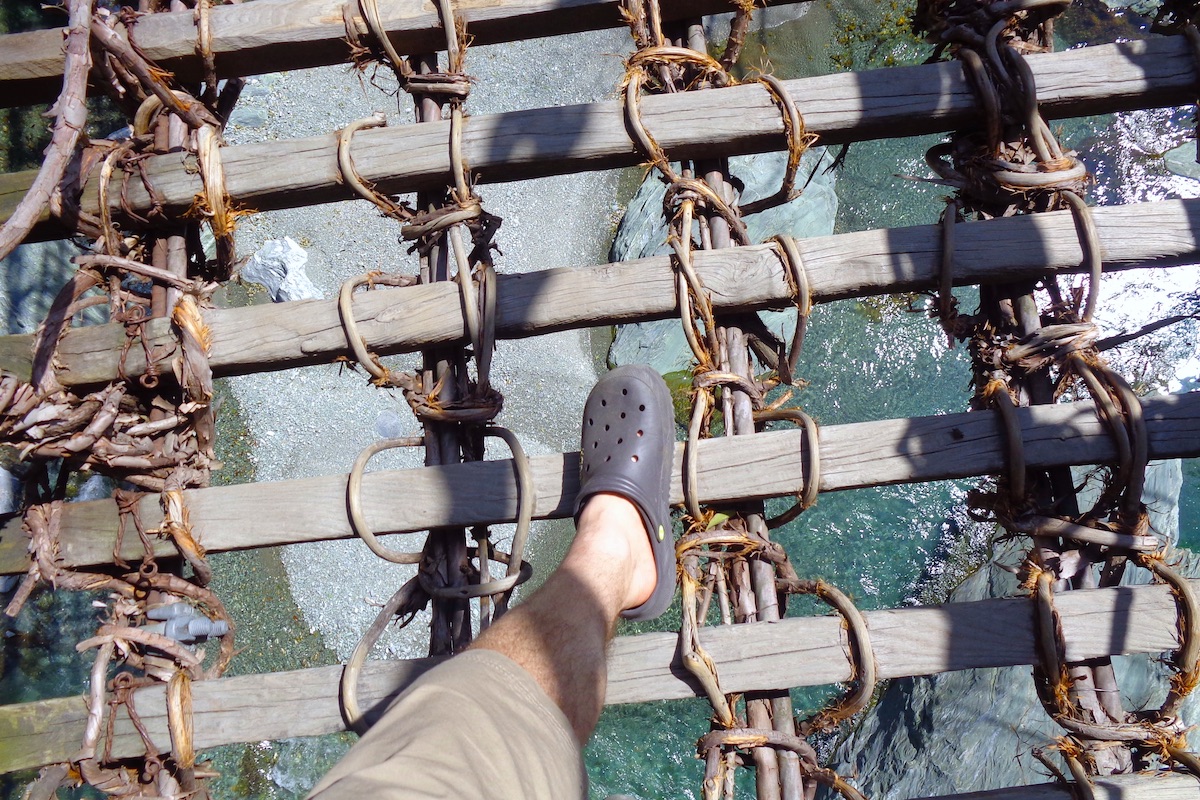 Indeed it was a thrilling experience, but it’s hard to imagine how in the past the local people didn’t just cross such bridges every day, but the original ones swayed much more and were nowhere near as well built.

Looking up at the Kazurabashi

After crossing the bridge I walked a bit up the road to a path that led down to the river.

The Iya River is renowned for its cool, clear waters and smooth emerald colored stones, and since it was an unseasonably warm spring day, many families were here splashing about. 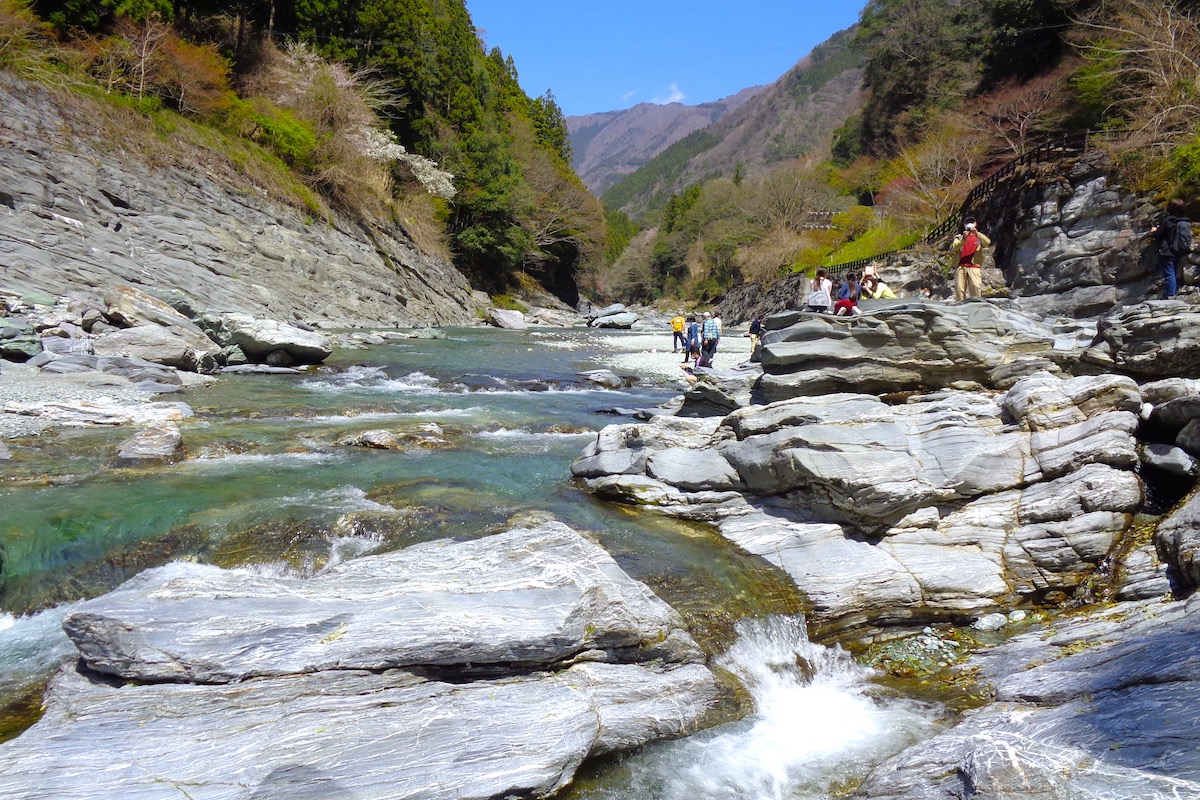 From down here the sight of the Kazurabashi took on a different character, and as I gazed up at it from within the tranquil river I reveled in the view of this back-country masterpiece. 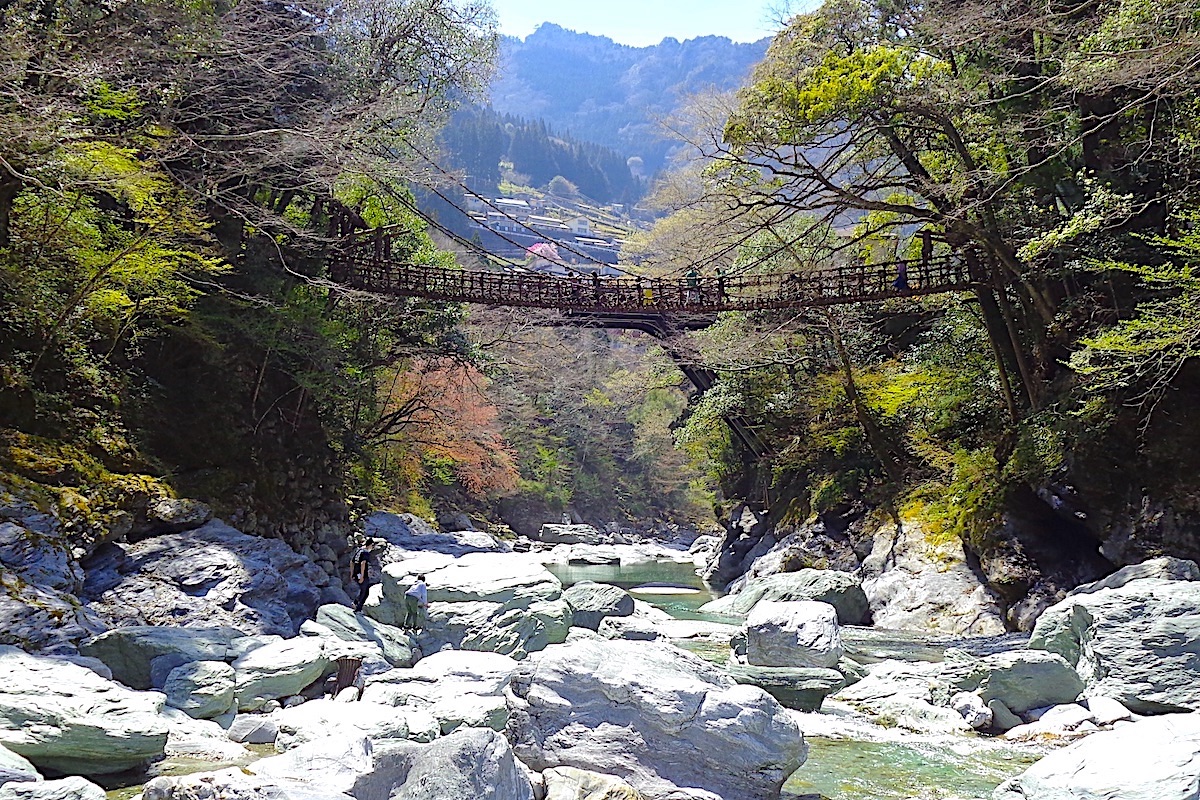 In Part 2 we take a walk around the Kazurabashi to taste some of the local foods and see some other sights..

In the evenings from 7pm – 9:30pm the Kazurabashi Bridge is illuminated with special spotlights. At this time it is free to view, but not possible to cross.