Though the Iya Valley is famed for its historic vine bridges, most people only ever encounter the main Iya-no-Kazurabashi located at the lower end of the valley in Nishi-Iya (West Iya). However, about an hour’s drive further into Higashi-Iya (East Iya), there are another pair of vine bridges tucked away here deep in the primordial forest. 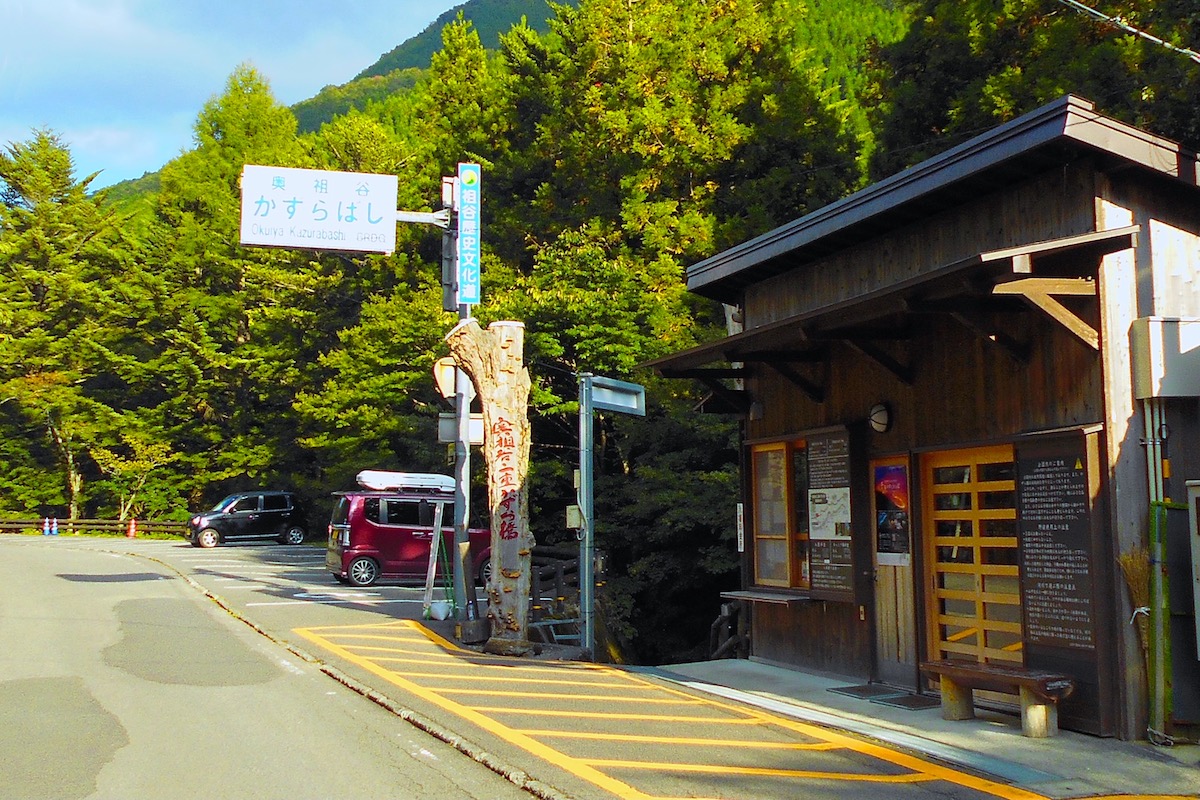 Due to this isolation at the furthest part of the valley, the Oku-Iya Niju Kazurabashi (“Deep Iya Double Vine Bridges”) get relatively few visitors compared to the main vine bridge. But anyone who visits will immediately tell you it is worth the extra effort, and staying at the campground here is perhaps the best way to experience this lovely place.

The Double Vine Bridges themselves are located about 100 meters down a path through the forest from the roadside entrance booth. At the entrance there is ample free parking and it is also a stop for the local bus (Niju Kazurabashi Bus Stop). 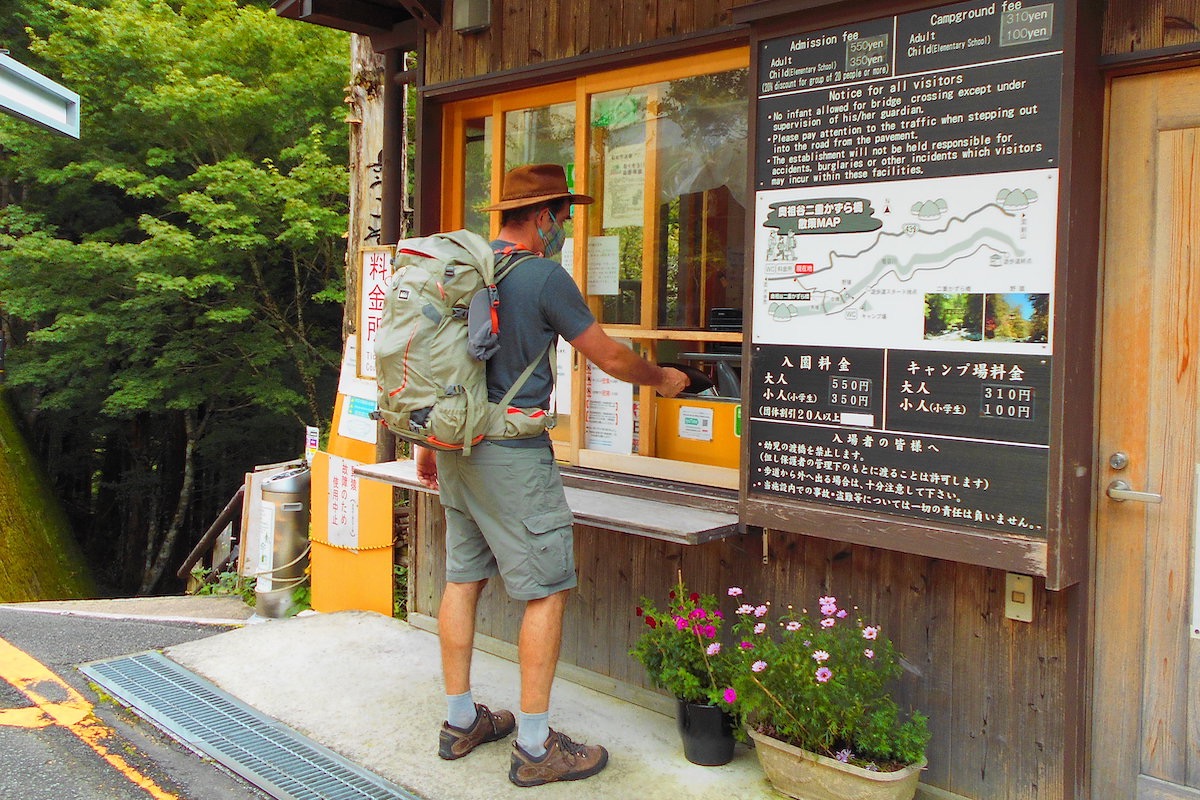 The entrance fee for the bridges is 550 yen for adults (350 yen children) and to use the campground it is an additional 310 yen (100 yen children) per person. 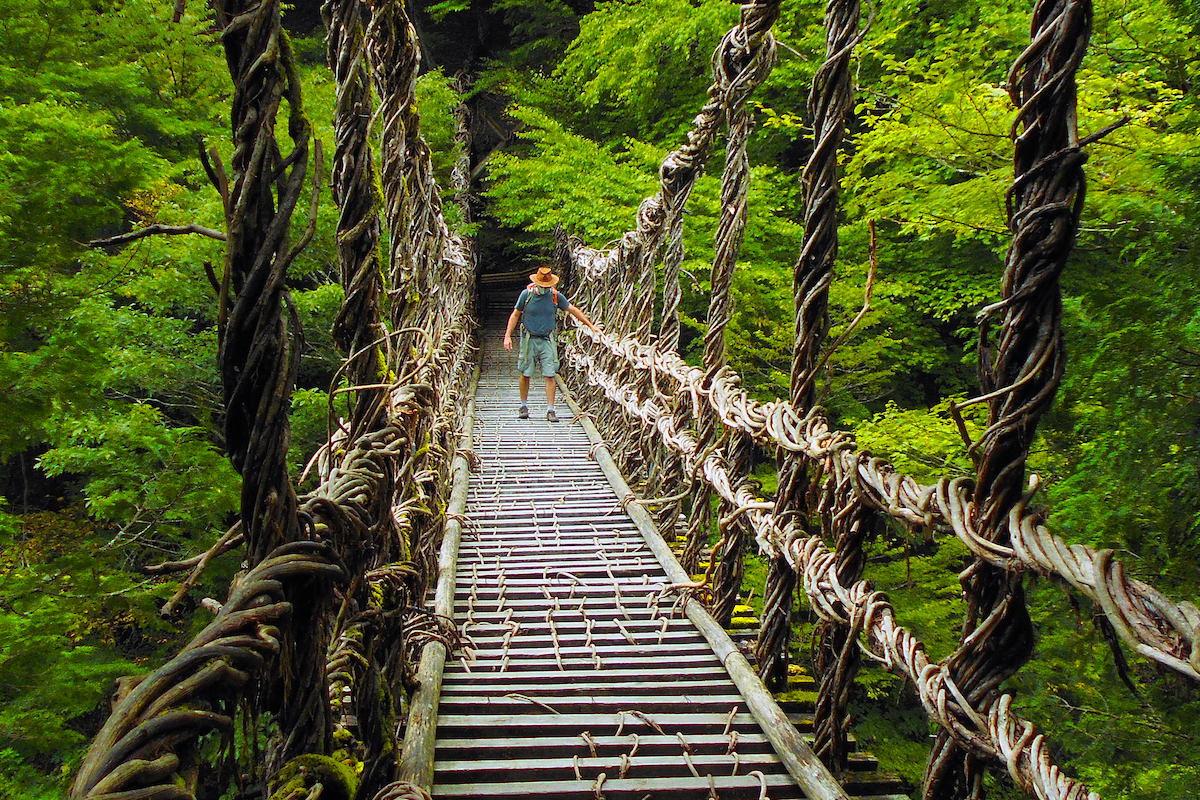 Upon stepping onto the bridges you feel like you are crossing into a different world and no longer in the 21st century. With the creaking vines and clear blue waters of the Iya River rushing below, it’s important to watch your step as the bridge begins to sway as you move. 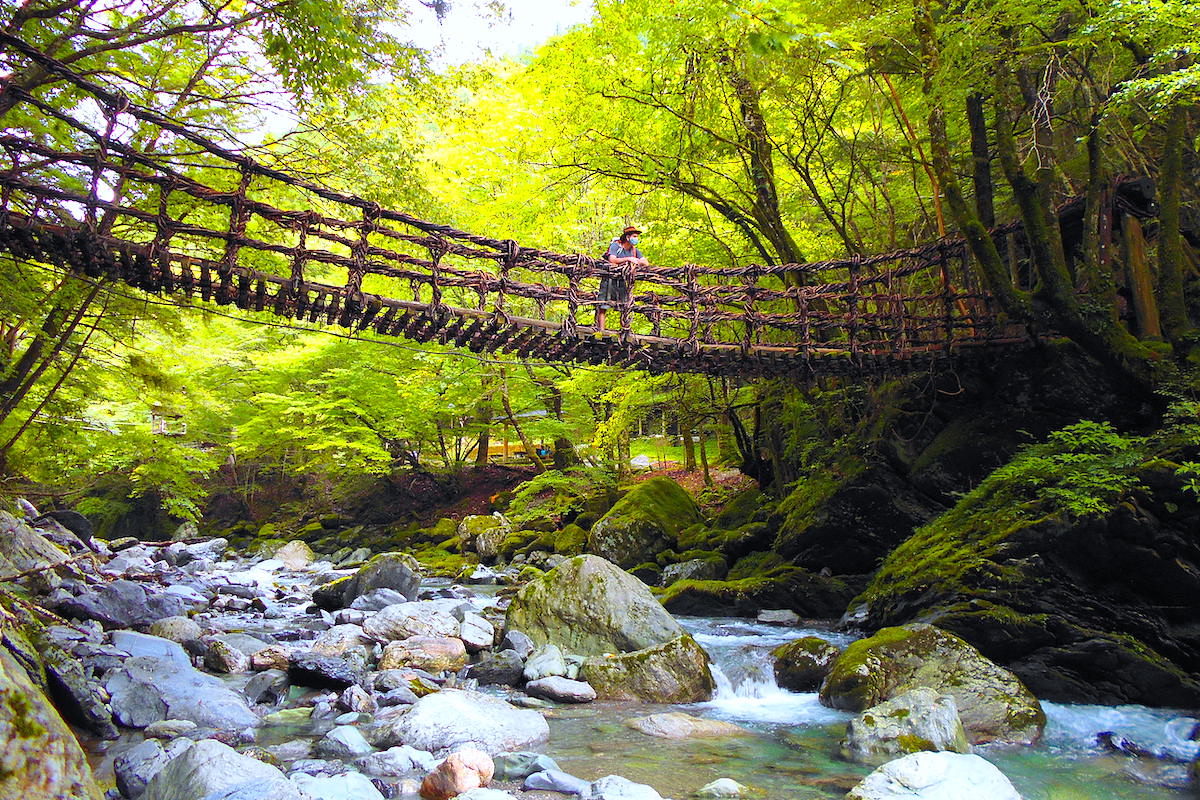 There were once as many as 13 vine bridges in the Iya Valley, and legends say that they were the invention of the fugitive Heike samurai, who came to Iya back in the 12th century in order to hide.

There is also a Yaen (“Monkey Cart”) available here which allows you to pull yourself across the river via suspended cables, which is very helpful if you don’t want to carry your camping gear over the bridge, but as of time of writing the Yaen was not available because part of the walking path to it needs to be repaired. Hopefully it will be fixed soon. 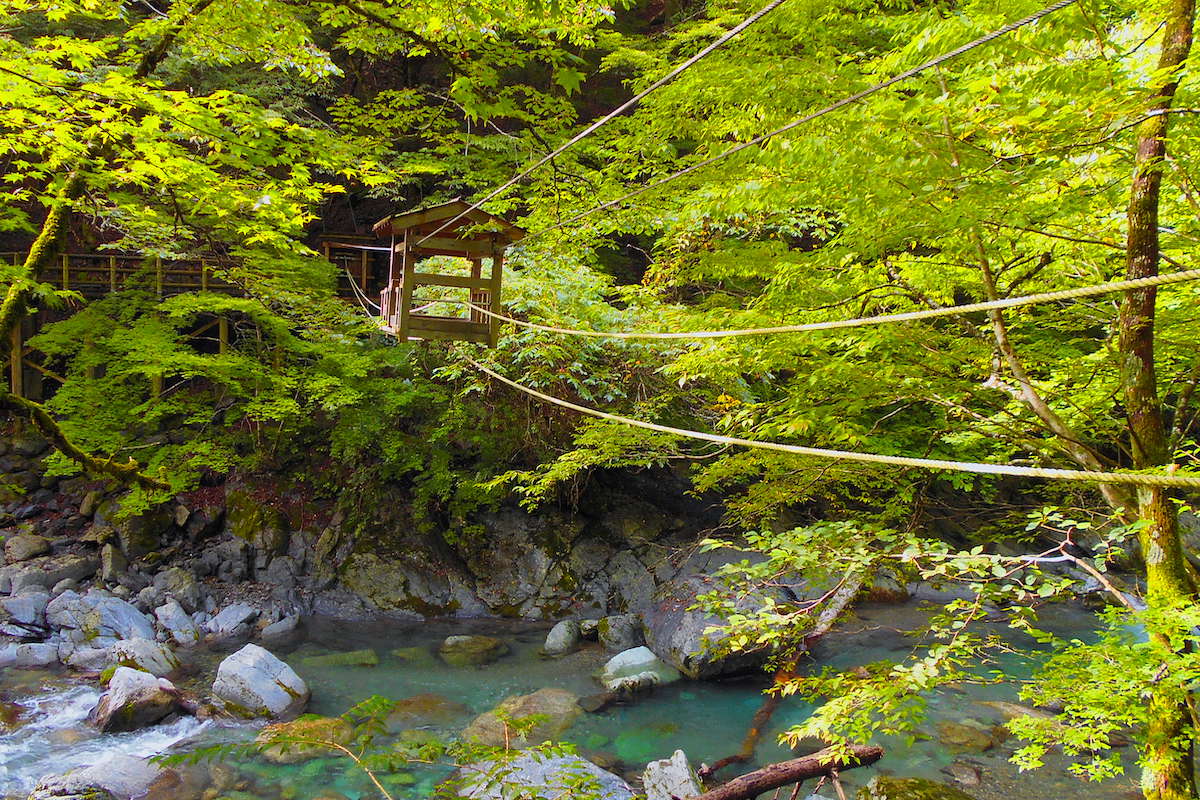 Once on the other side of the river, the spacious campground is located just a few dozen steps up river from the Female Bridge. This well equip site is ideally located and offers a wide flat expanse of pebbled gravel to set your tent.

Also on hand are several picnic tables, including one with a roof, as well as a covered cooking area with sinks and barbecues that would be greatly appreciated in case of rainy weather. 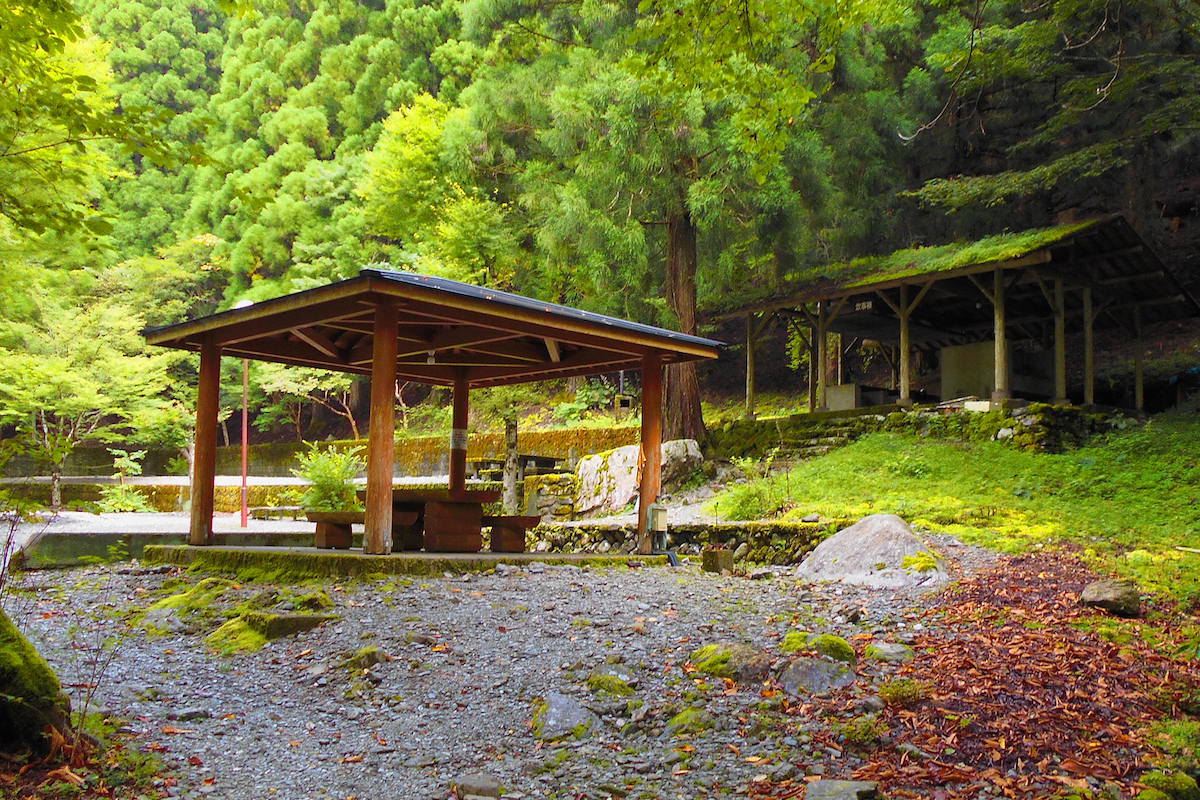 Running water comes from a spring located deep up the mountain, and though it is probably safe to drink directly, you may want to purify it just in case.

The toilets are also particularly clean, and in the evening a few electric lights switch on around the whole area, so those who may be a little hesitant about camping so deep in the forest can feel more at ease. 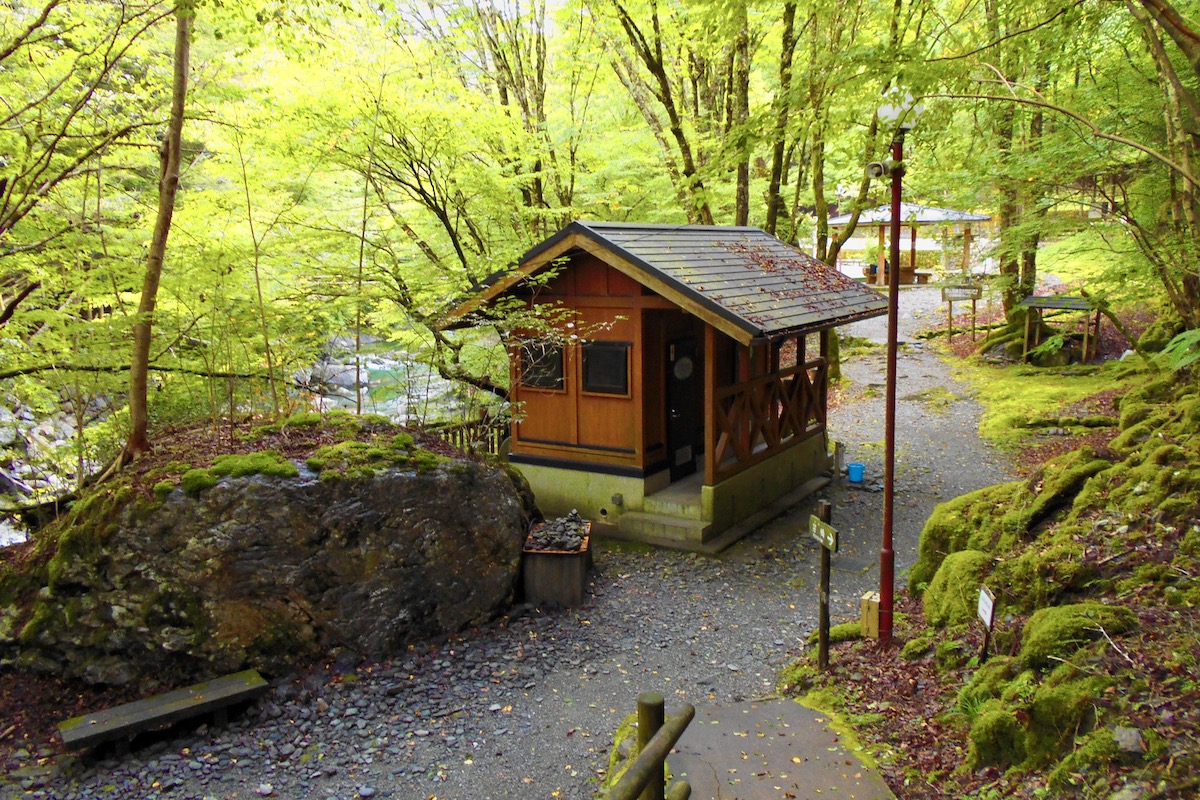 There are no showers available, but the gurgling, transparent waters of the river are almost begging for you to take a dip. Indeed, wading into the serene river with the otherworldly bridges hanging above makes for a truly one-of-a-kind experience, and it is part of what makes camping here so special.

In Parts 2 and 3 I will describe more about what camping here entails, and explain how you can further experience this wonderful place.

For more details in English on the Double Vine Bridges and access, check the IyaTime website here: