With its collection of thatched roof farmhouses, stone-lined walking paths, and terraced farm plots that climb up the mountainside, Ochiai Village is an enduring example of a traditional Iya Valley hamlet.

Although in times past the only way to get around Ochiai Village would have been on foot, nowadays there is a narrow road which twists and turns as it threads its way up through the village.

And while the road may be convenient for general access, it is still possible to walk along the ancient pathways which interconnect every house, and for the residents, it is still usually the fastest and most direct way to get from place to place. 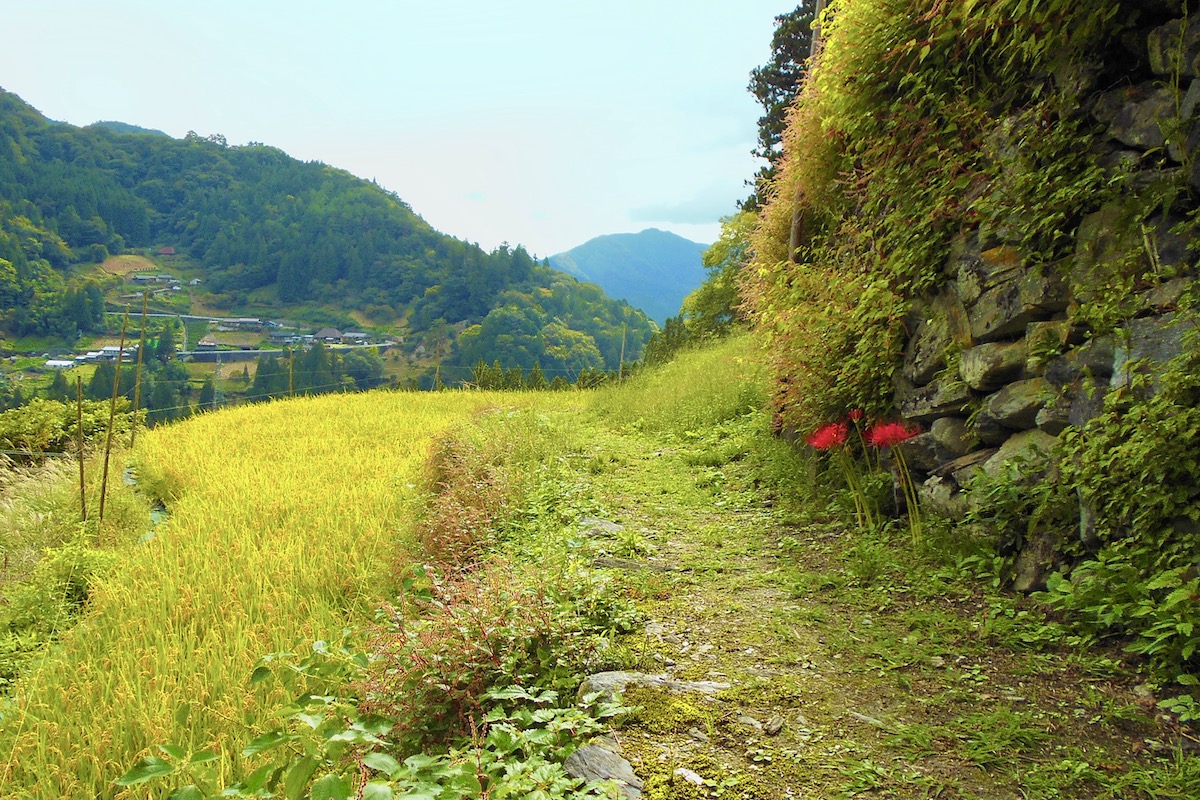 But for sure, despite being often steep, walking along these paths is probably the best way for any visitor to encounter the village. 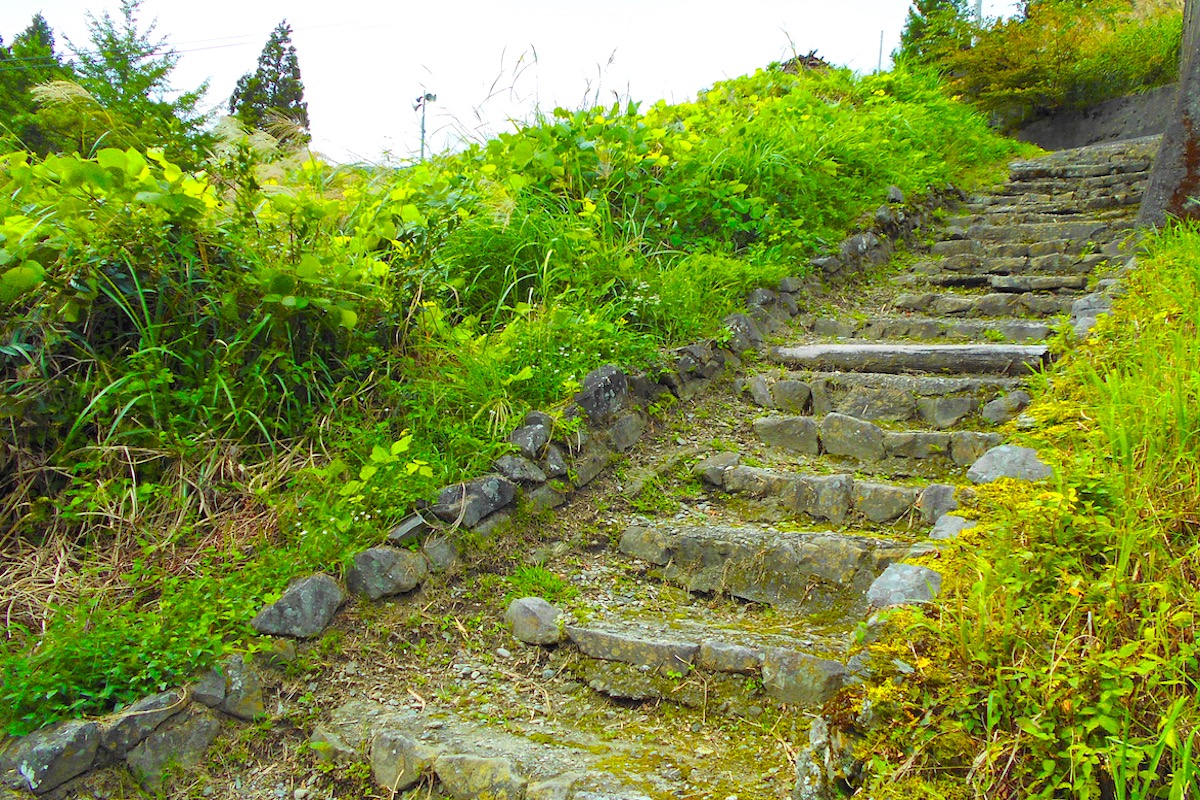 Here and there along the pathways one is sure to find some of the metal sign plaques that have been set up, which conveniently explain in both Japanese and English various aspects of Ochiai, including things like the pathways themselves and the construction of the rock walls. 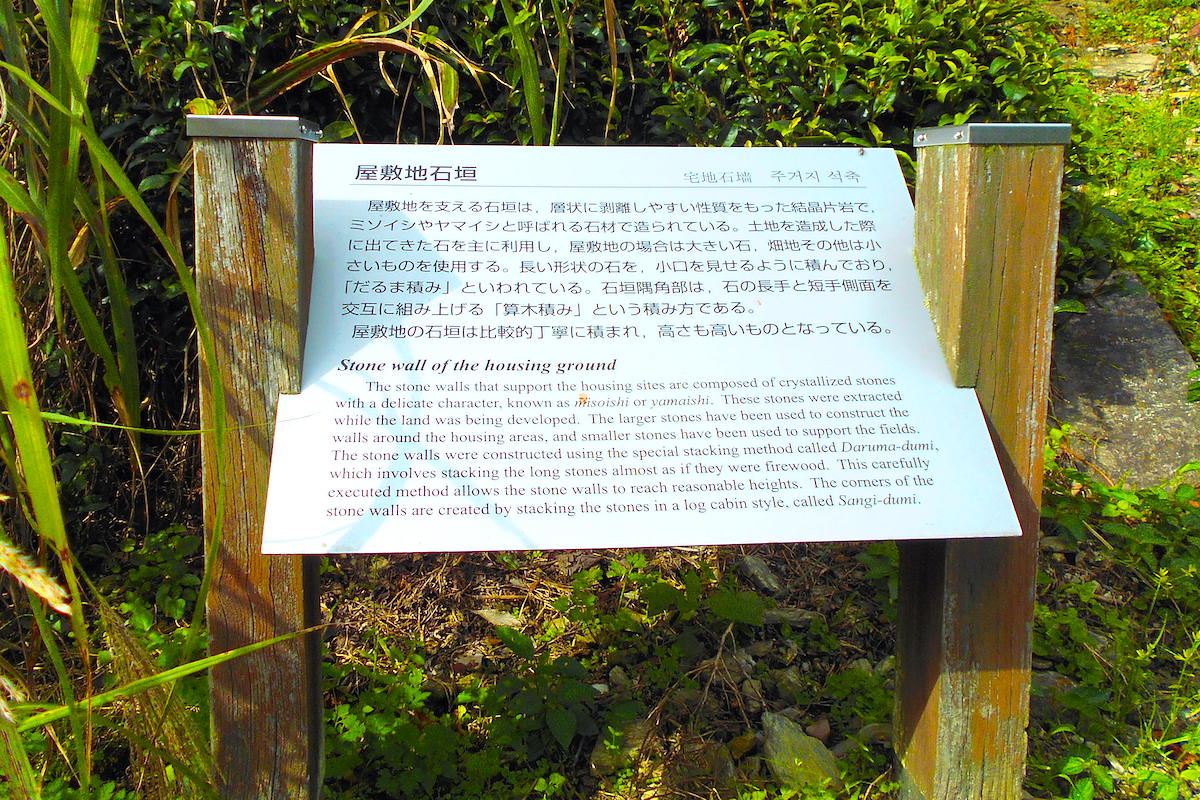 And being that the village climbs up the mountainside, there are plenty of rock walls all over the place in order to terrace off the land, support the homes, and prevent erosion. Some of these walls are beautifully constructed. 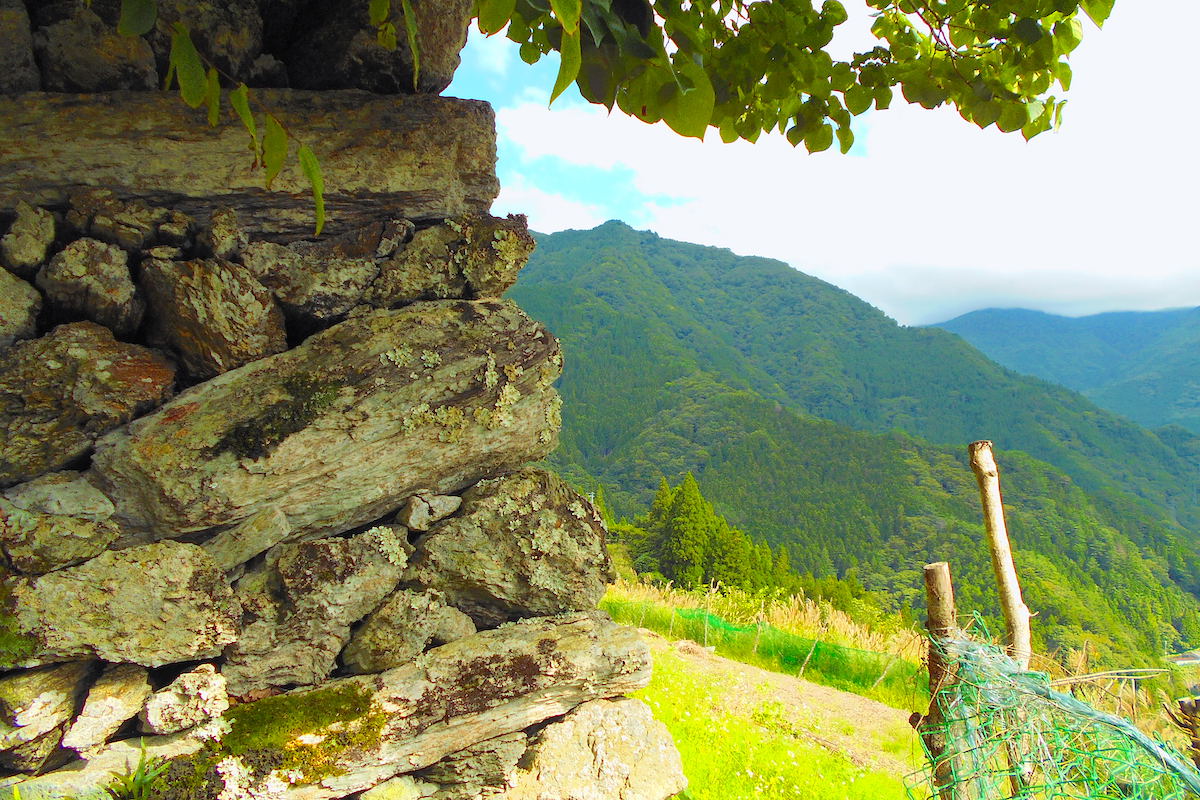 Where traditions continue to live

Also noticeable all around Ochiai are the various farming plots. Some have been leveled off to be suitable for growing rice, but the majority of the fields are sloped.

Actually, the ancient sloped farming methods of the Iya Valley and western Tokushima are recognized by the UN as a Globally Important Agricultural Heritage System (GIAHS). 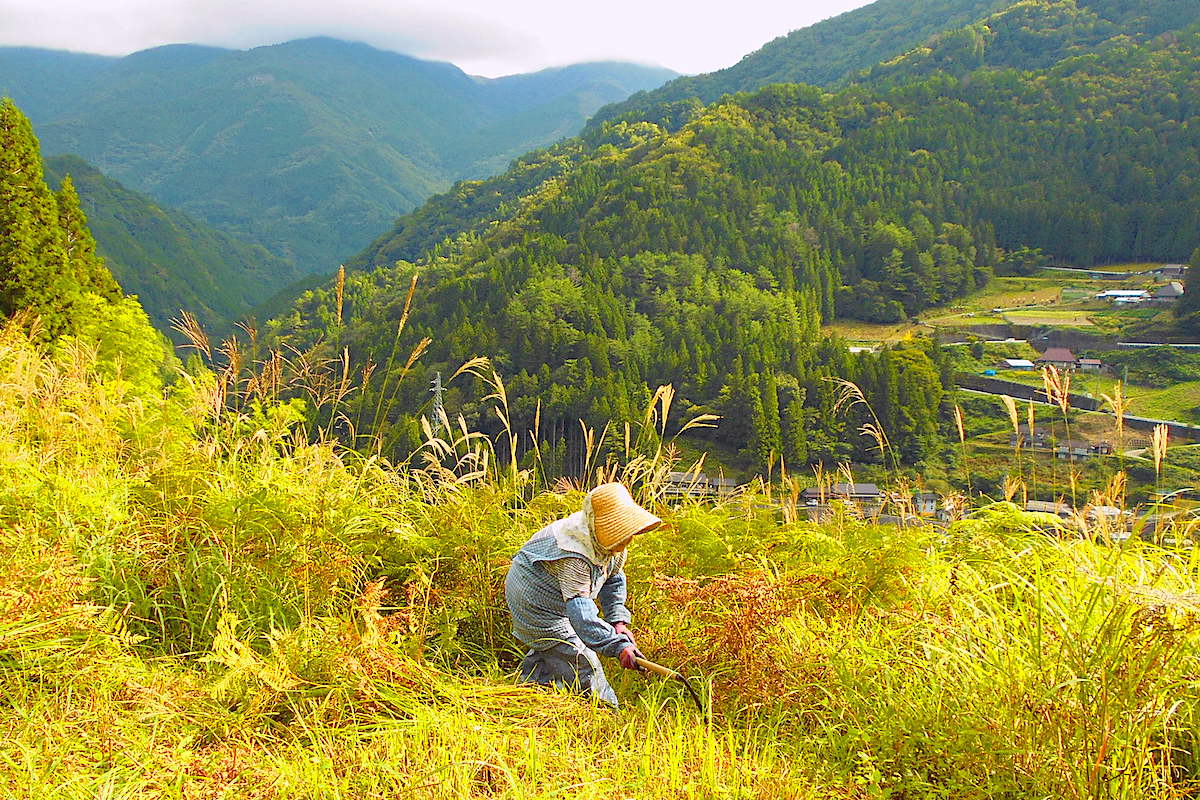 Potatoes are one of the main crops grown in these sloped areas during the spring and early summer, and the rocky soil of Iya makes them grow particularly small and dense, such that Iya potatoes are a unique culinary offering.

From the late summer into the autumn many of the fields are then sown with buckwheat (soba), and the Iya Valley is famous for both the noodles and porridge made from this hearty grain. Around mid to late September the small white buckwheat flowers come into bloom, and after it has been harvested several weeks later, it is common to see bundles of the plants hung on racks to dry out in the sun. 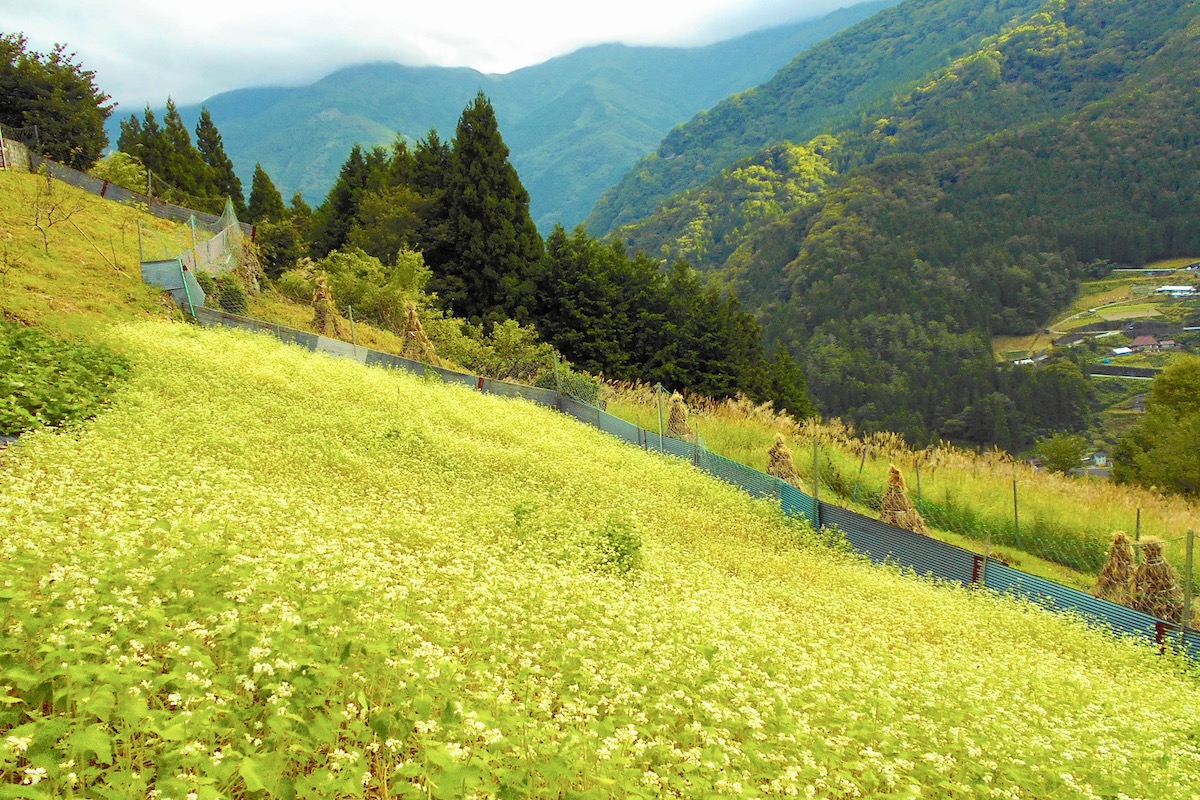 And for those interested in tasting some of the renowned Iya soba, at the bottom of Ochiai Village along the main road is the Soba Dojo restaurant, which is open daily for lunch.

Also noticeable from late autumn into the winter are the pyramidal towers of grass erected across the fields of Ochiai. These towering bundles are locally known as “koeguro” and are made of the same grass used for thatching the roofs of the houses. However these koeguro bundles are kept like this in order to dry out and partially decompose during the winter, and then in the spring they are shredded into small pieces and spread across the fields as natural fertilizer. 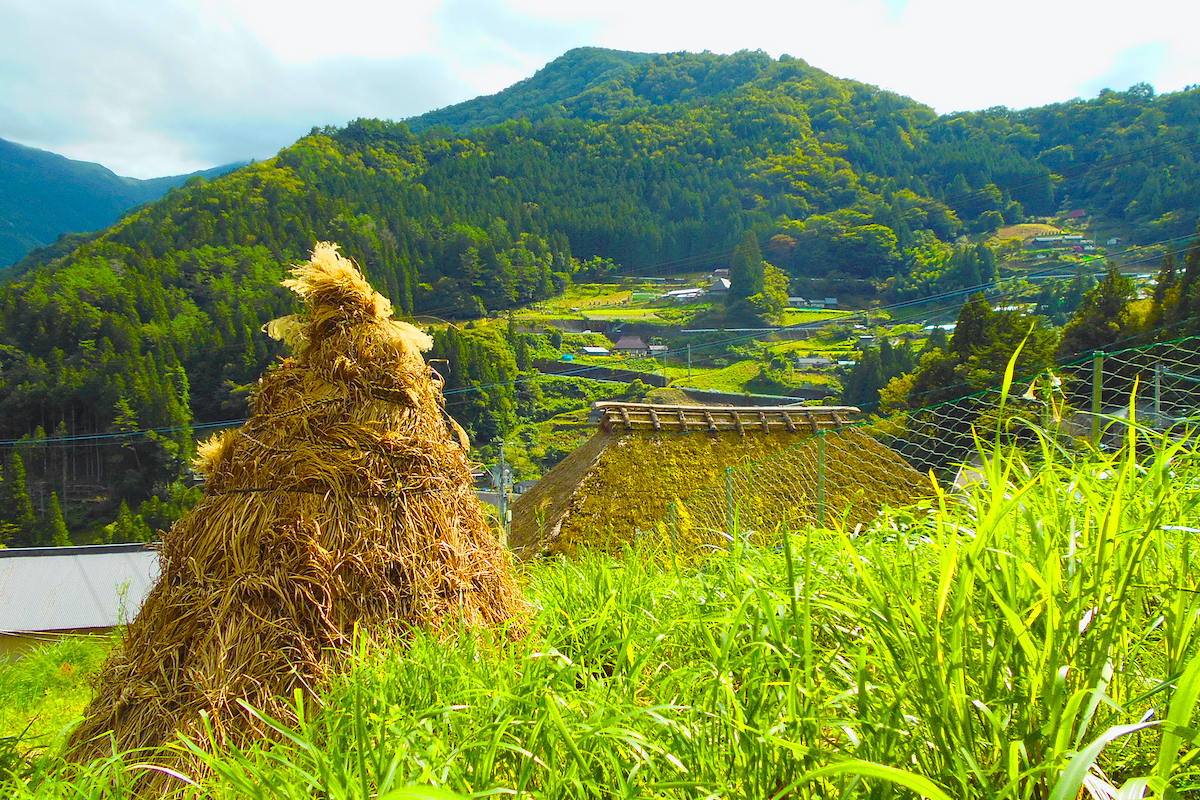 In the center of Ochiai Village, at a point where many of the foot paths converge, is the tranquil Sansho Jinja (Sansho Shrine). Constructed in the 1930s and surrounded by massive old-growth cedar and zelkova elm trees, this shrine is actually an amalgamation of three older shrines which were once located in different parts in the village. 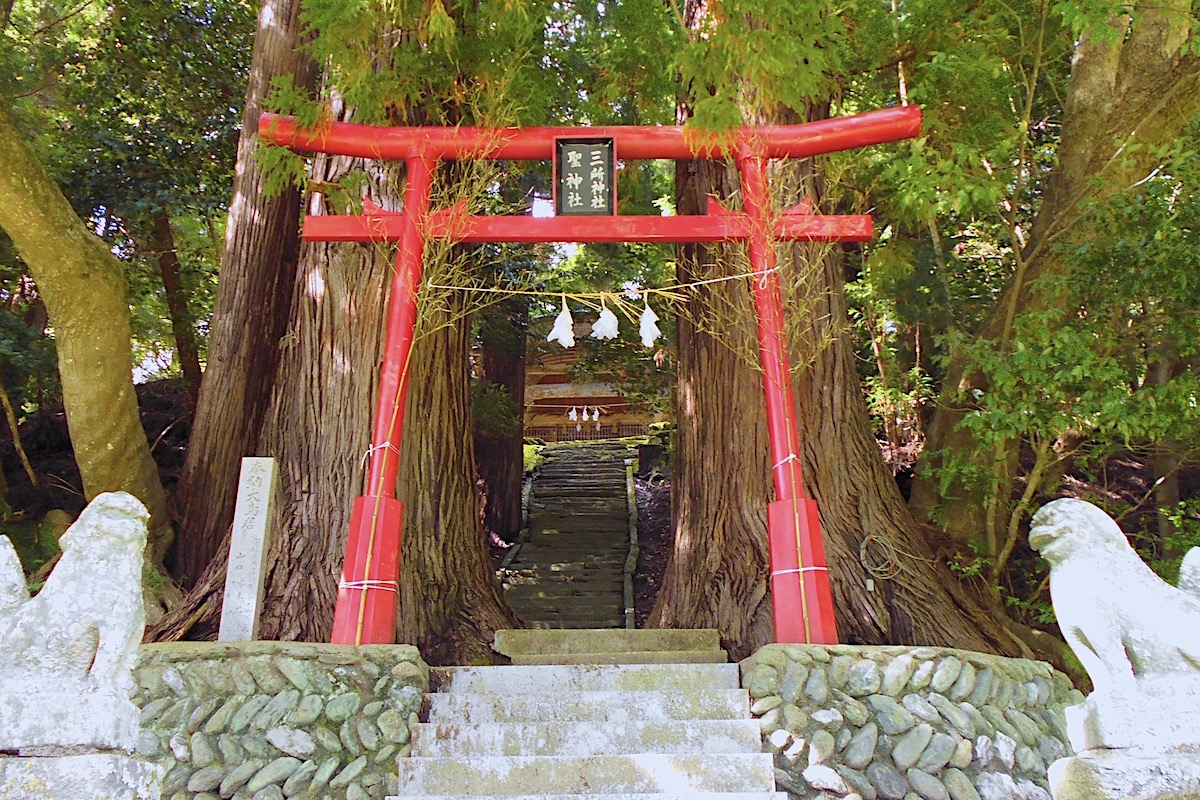 With the sounds of birds chirping and a curtain of shade provided by the trees, the shrine offers a peaceful resting spot for anyone walking around the village. 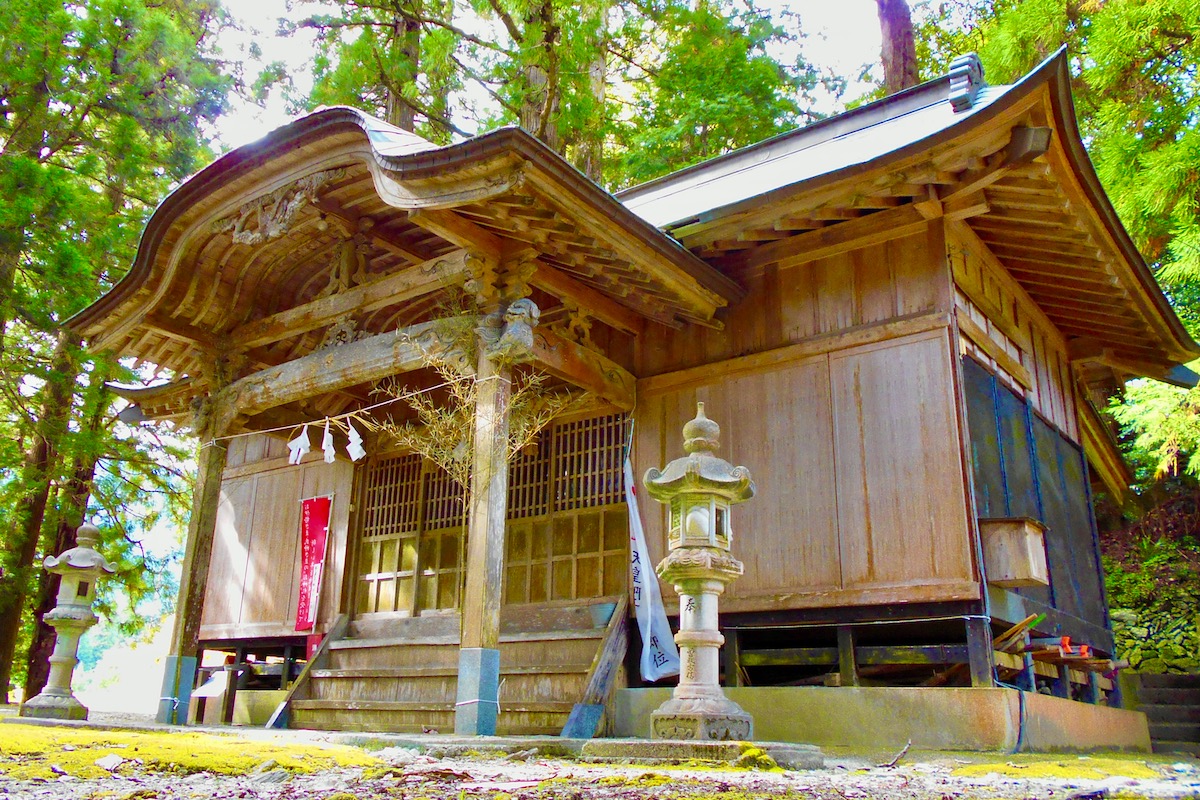 Twice a year a festival is held at the shrine where blessings are offered by the local Shinto priest and the neighborhood people engage in various rituals, which includes participants throwing elaborate poles between themselves, local children donning costumes and playing drums, and a procession of carrying around the site a large “mikoshi” portable shrine. 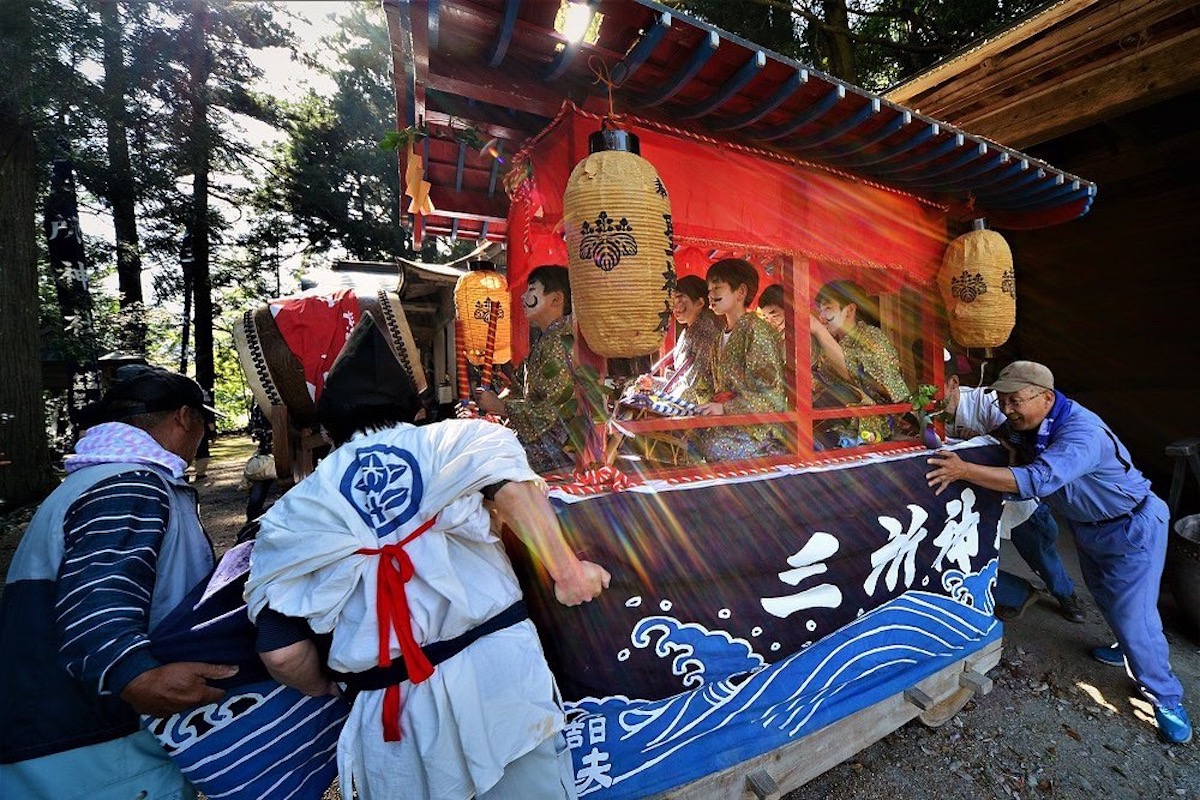 In part 3 we will go inside one of Ochiai’s thatched roof farmhouses and explain how it is also possible for visitors to stay in one of these beautiful homes overnight.

For more information about Ochiai Village and the Soba Dojo restaurant, check the Ochiai page on the IyaTime website: