After finishing his bath, Kris retreated inside Kajiya to have dinner. He sat around the large irori hearth in the center of the main room where Shino-san had their meal slowly simmering over the burning coals. 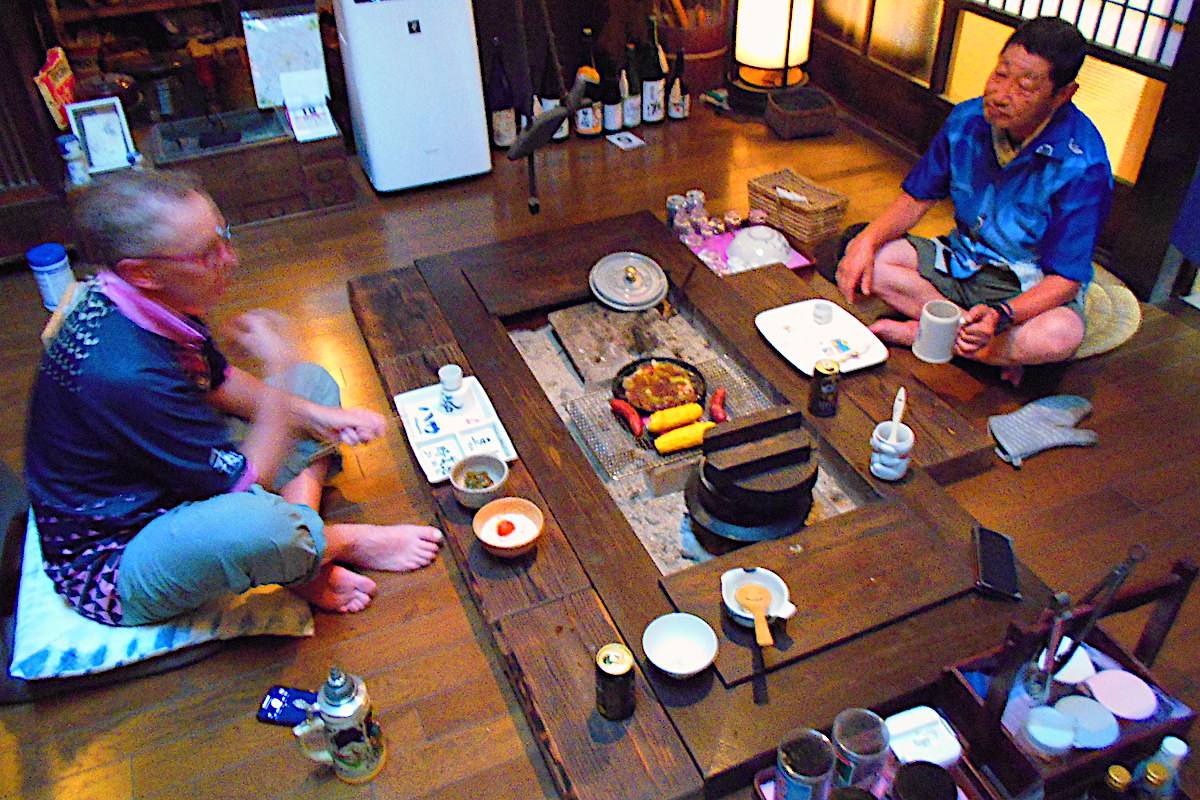 Around us the house was artistically decorated with Shino-san’s lifetime’s-worth of collected antiques, including paper lanterns, wood furniture, and archaic tools. Kris described the assortment of wares, which also overflowed outside and around the house, as “organized chaos”.

With a spirited countdown that burst naturally from the perpetually-energetic Shino-san, he lifted the lid of the pan on the irori to reveal dinner’s main course, which tonight was a roasted skillet of sliced venison and wild boar. 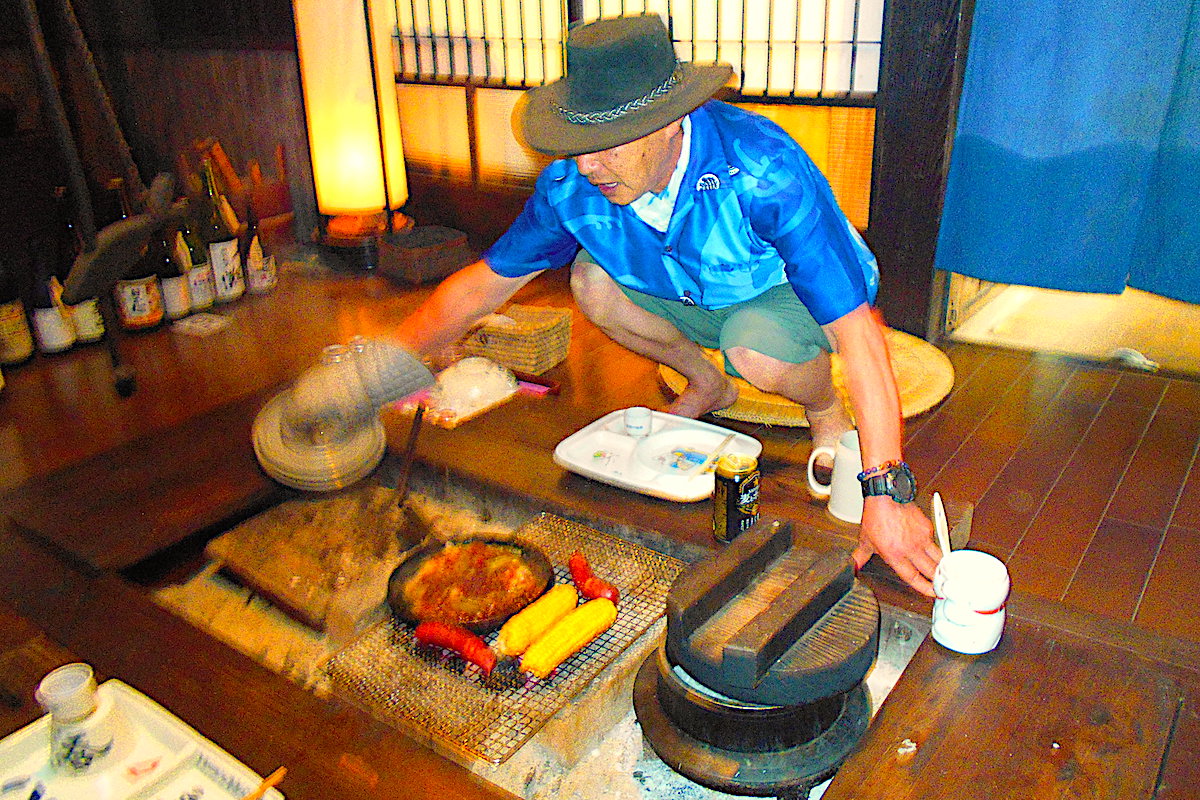 Shino-san enjoys making his guests a variety of different dishes, and can also prepare vegetarian meals on request.

Also on the menu tonight were some locally made venison sausages, corn on the cob, salad, and Iya’s famed “stone” tofu, as well as the rice Kris made earlier in the outdoor hagama. 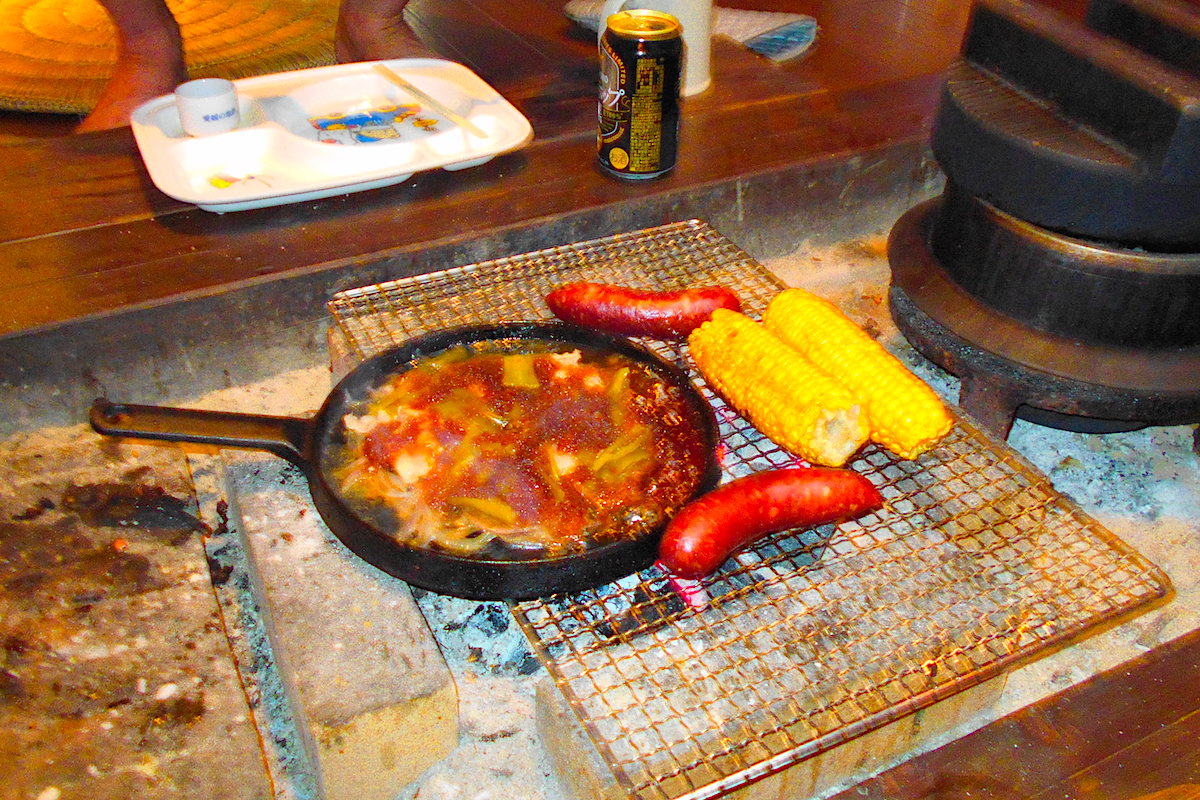 As he ate dinner, Kris explained the day he had with Shino-san, who drove Kris around the Iya Valley for a bit of a tour. “I had no idea that people lived in such an isolated way.”

For guests that stay at least two nights at Kajiya, Shino-san will take them on a private tour of the valley and only asks in return that you buy him some gas and his lunch. 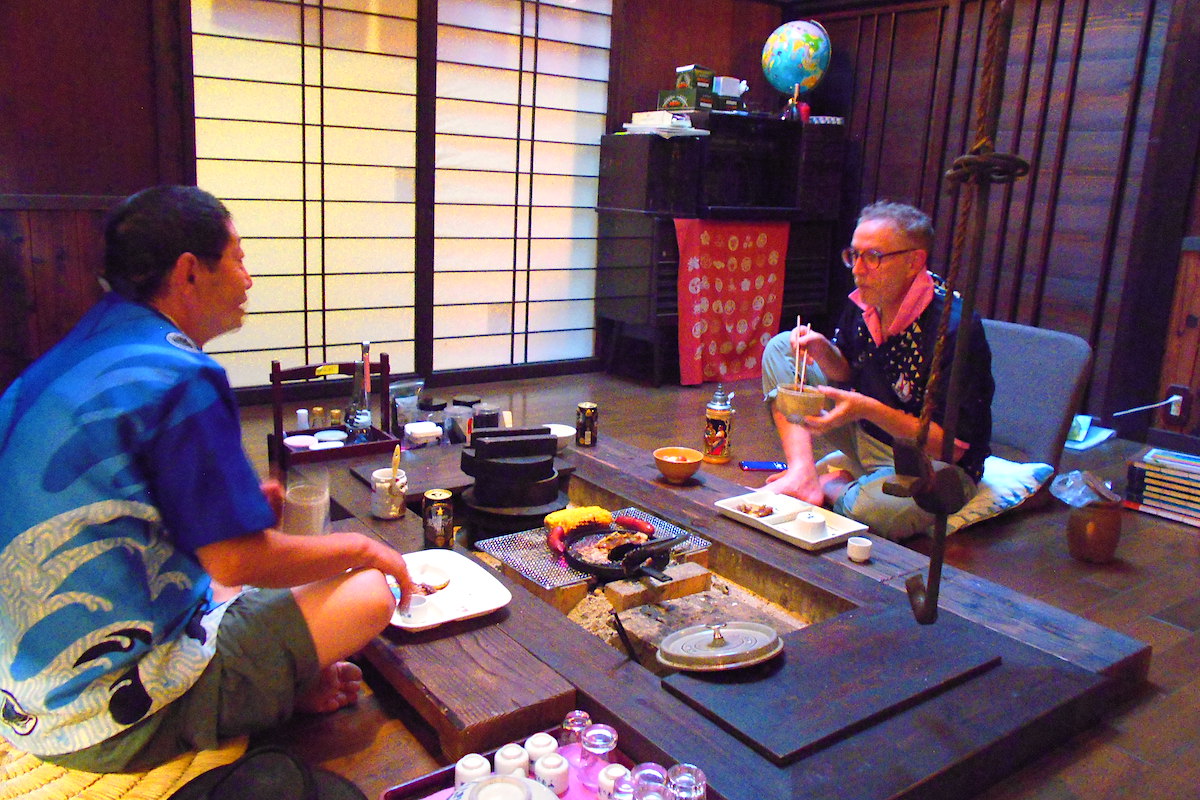 “I’m pretty happy I had him with me as a guide. Even though I drove all around Shikoku in my own car, all the narrow, one-lane roads in Iya are crazy! I would never have found the places he took me today, not to mention how I probably would have been too scared to even drive myself anyway.”

After dinner, it was time to partake in Shino-san’s greatest assemblage, his collection of sake. He has an entire room filled with hundreds of bottles of Japan’s national spirit that come from every prefecture in the country. “I love sake and this is one of the reasons I decided to stay at Kajiya,” explained Kris. 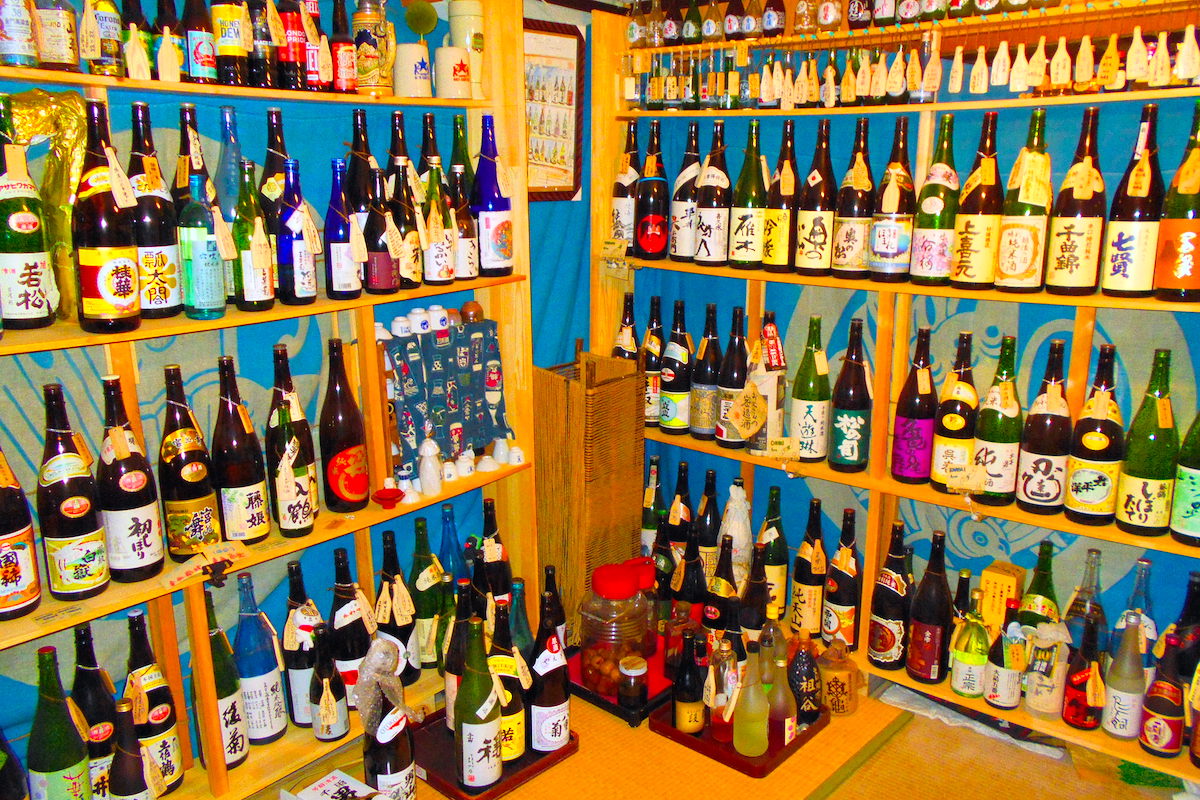 And Shino-san has a unique system for any guest looking to sample as much sake as they wish, where all he asks is to bring him a bottle of sake from somewhere else in Japan to donate to his collection. And if coming from abroad, he would equally welcome a bottle of alcohol from your home country. 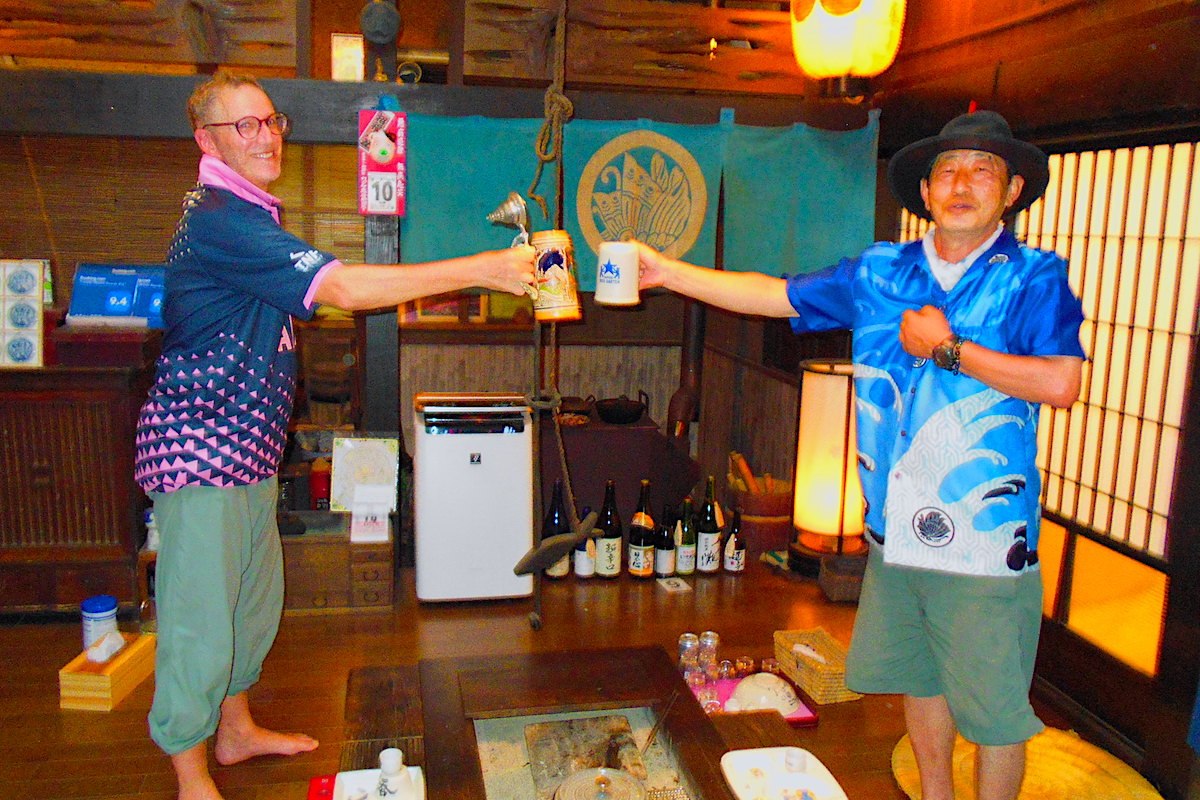 As they began to sample the night away, Kris laughed at Shino-san’s quirky jokes and got some tips for where else to visit in Shikoku. “Not only does Shino-san make you feel welcome, but he understands what it means to be a traveler.”