Mt. Tsurugi – A Mountain Steeped in Legend and Mystery – Part 2

This summer on July 18th the annual Sacred Tsurugi Mountain Worshipping Festival was held on the summit of Mt. Tsurugi. Unfortunately, the weather was quite severe this day, but despite the whipping wind and rain, well over a hundred people gathered to attend and participate in this age-old event.

After taking the chairlift halfway up the mountain, the devotees climbed another hour in the downpour to the small Tsurugisan Hongu Hozoseki Shrine that is near the summit. Some even carried large taiko drums for the ceremony.

According to the traditions of this mountain ritual, the attendees wore white jackets, with many bringing adorned walking sticks and sacred conch shells to blow into. Preparations were made at the shrine by the members of the Inbe Cultural Study Group of Tokushima Prefecture, who have been in charge of this annual event since last year. 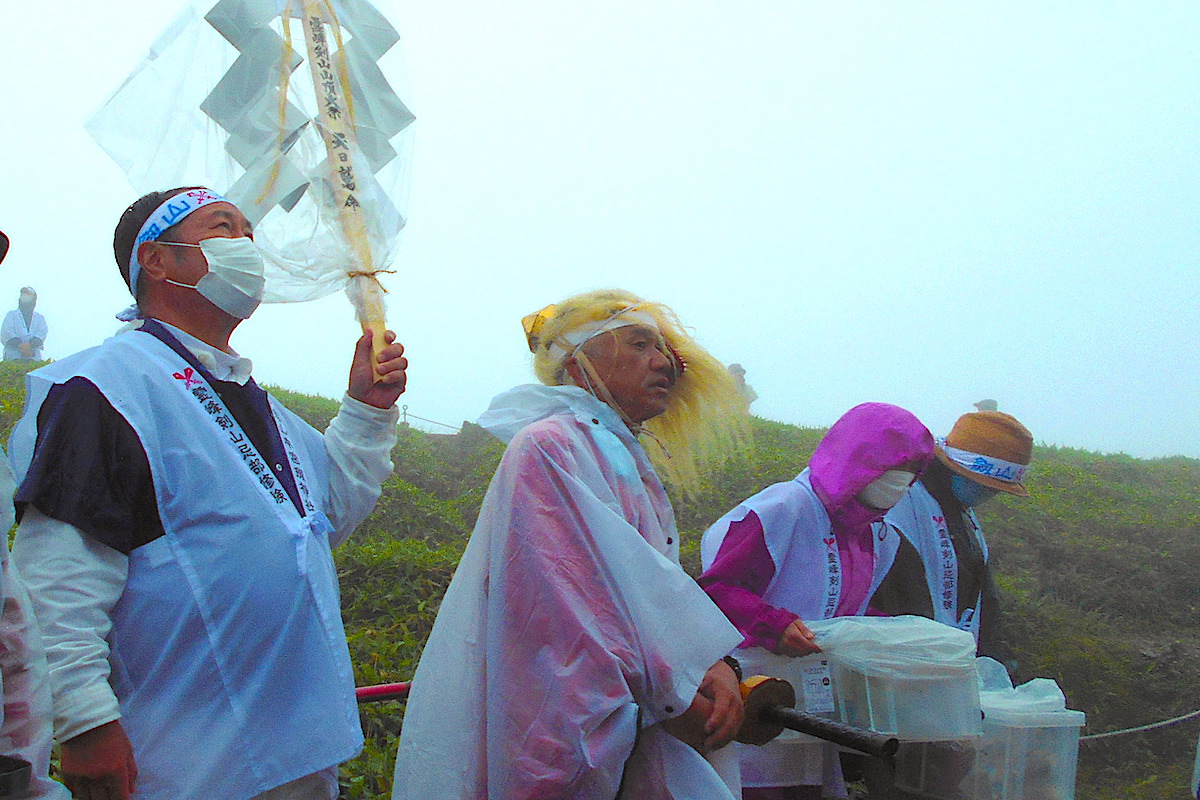 To begin, the worshipers all assembled for a Shinto ritual at the shrine, with the priests performing rites of purity. People clapped in unison to the chants of the priests, while the sounds of blowing conch shells and drums filed the air. 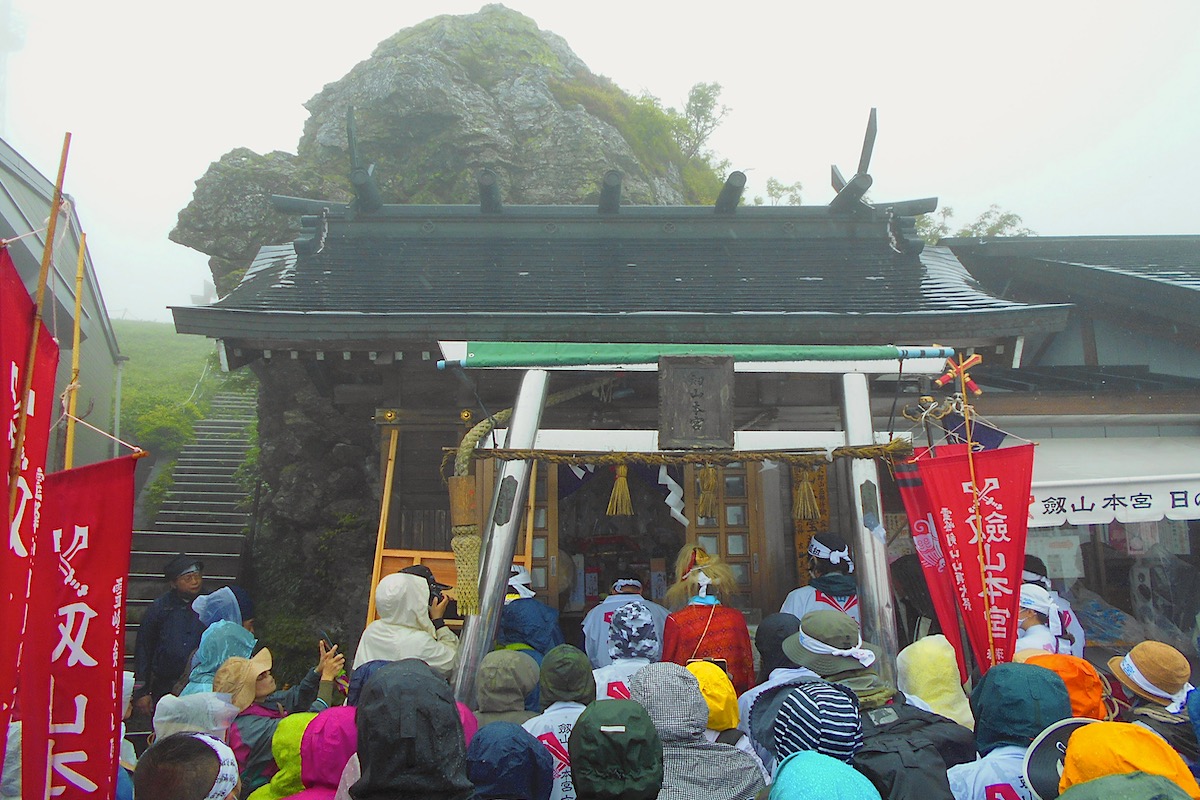 From here the procession moved to the upper side of the huge sacred boulder that is perched immediately behind the shrine. As mentioned in Part 1, legends say that this bolder is where the ancient Heike samurai hid the Emperor’s Sword. But for the devotees here, the massive stone is also a focal point of the mountain’s Shinto deity, so the priests climbed the boulder to serve the spirit while everyone below chanted in unison. 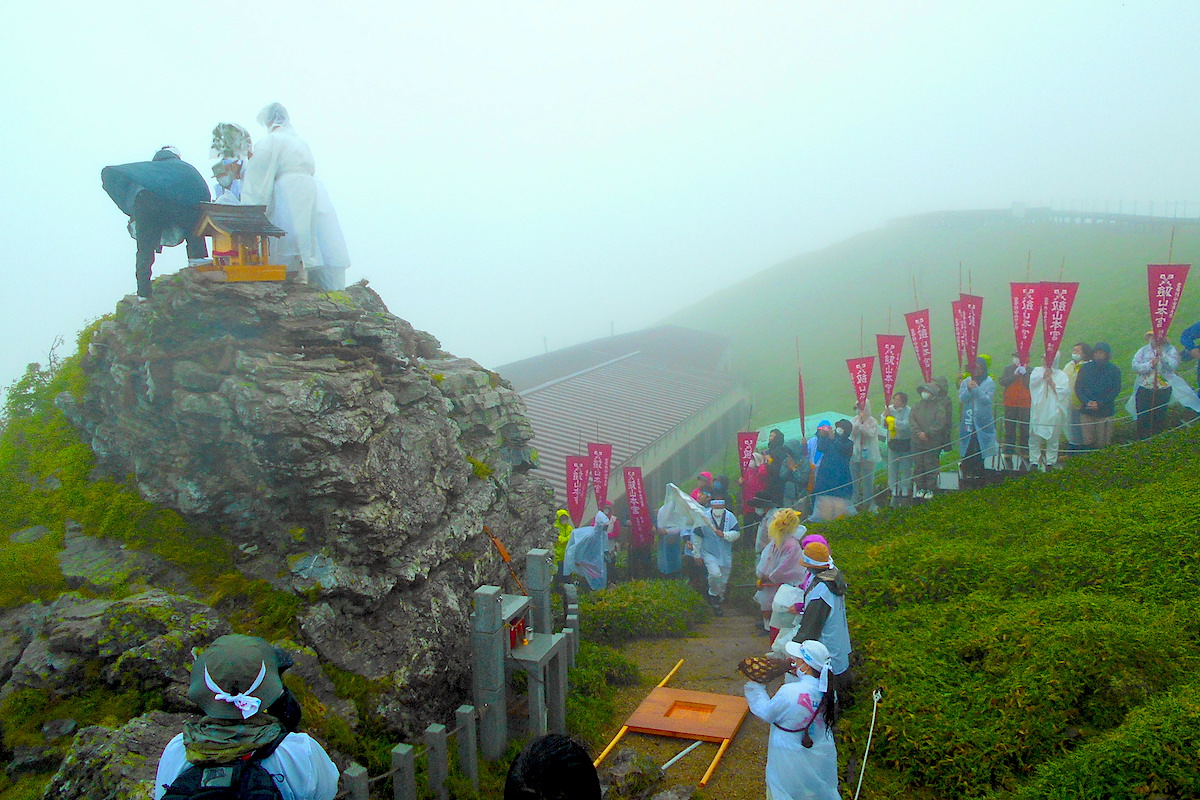 After this, the portable “mikoshi” shrines were brought forth to be taken in the procession across the broad mountain top. Usually, a very large golden mikoshi shrine is carried by a couple dozen people at this event, but due to the harsh weather conditions on this day, it was not possible. So instead, a couple smaller mikoshi shrines were carried, but their significance as being vehicles of the deities was still the same. 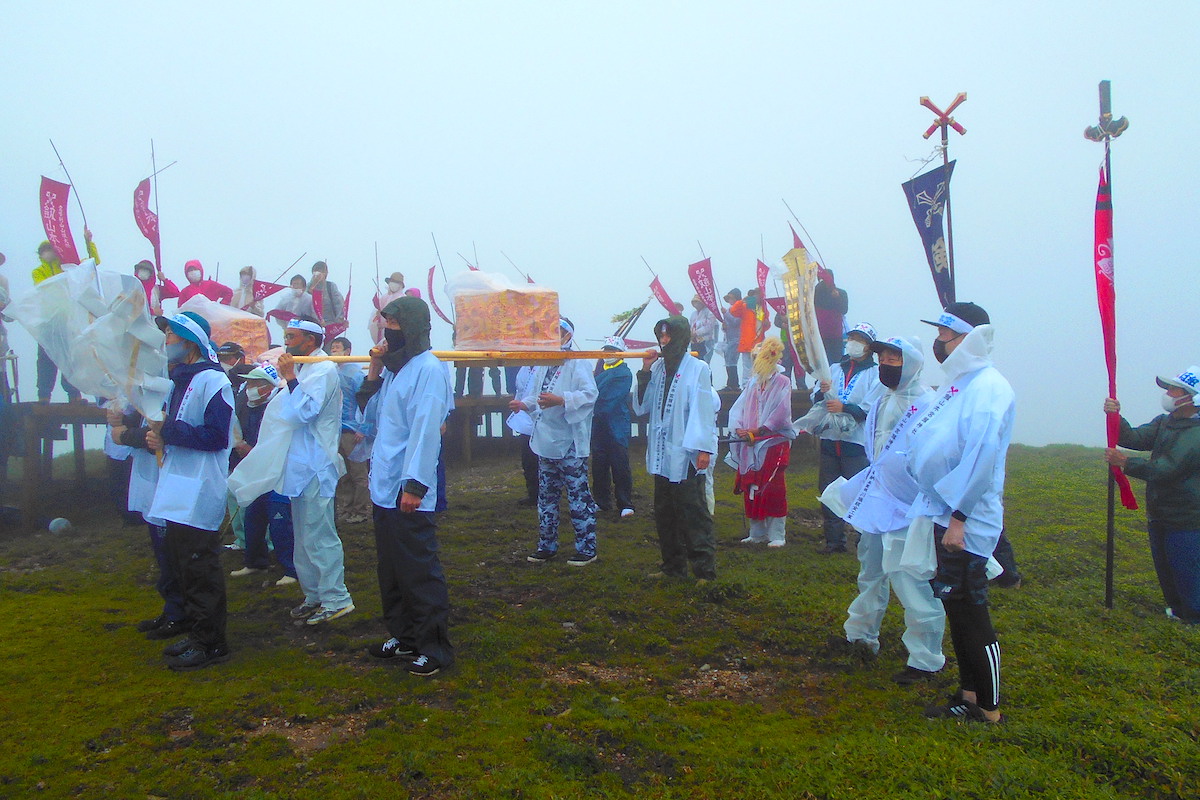 With some worshipers carrying flags of the Heike Samurai and of the Tsurugi Shrine, and others encircling the procession with a holy white rope, the group took blessings from the priests and began to move forward.

A Test of Faith

At this point, as they began trekking the several hundred meters across the exposed and treeless mountain top, the wind and rain became torrential. It was as if the mountain spirits were indeed testing the faith of those present. But the group persevered as they pushed through the thick sasa grass towards the summit, and along with the dense fog and the faithful chants filling the air, the ceremony was indeed sublime. 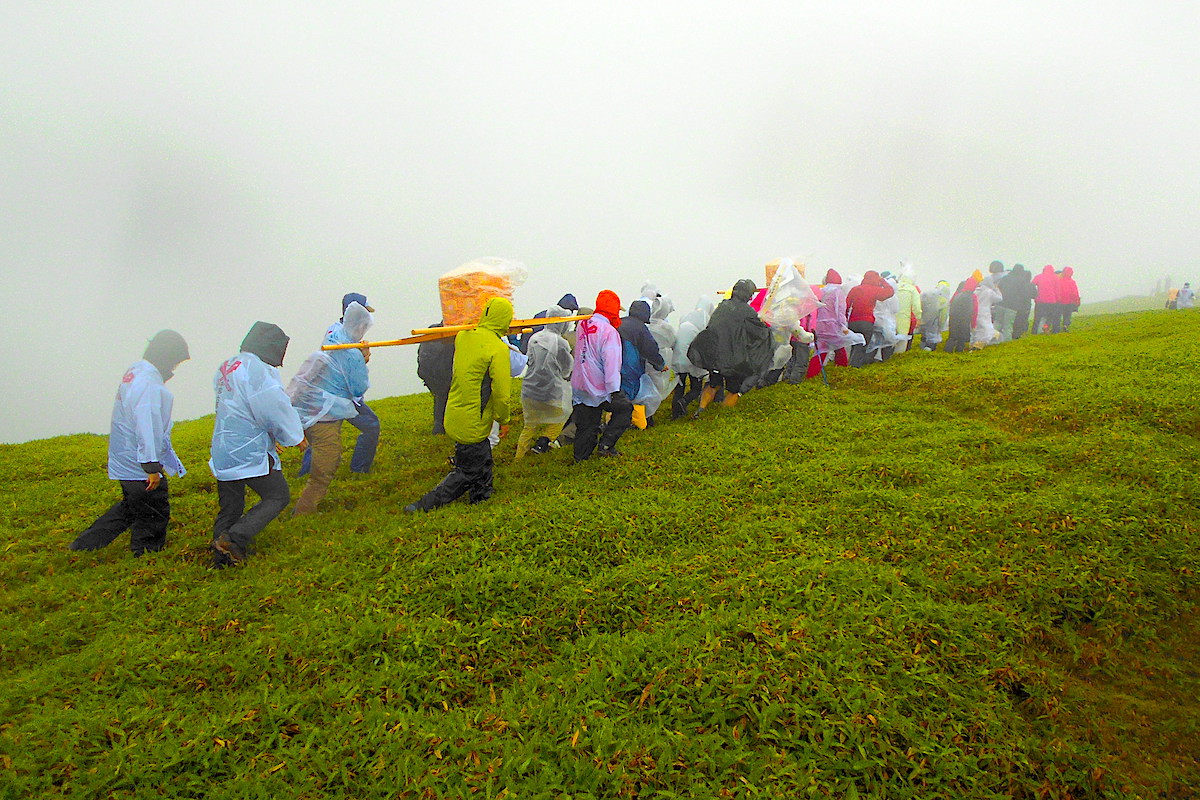 Upon reaching the summit, the mikoshi were placed at Mt. Tsurugi’s highest point. The devotees encircled this pinnacle of piety with their heads bowed while the priests performed their rituals of purification. Coupled with the incessantly harsh weather and an expanse of grey, foggy nothingness radiating out in every direction beyond, I felt as if I had entered into another world, where the power of nature, history, and spirits overcome the soul. 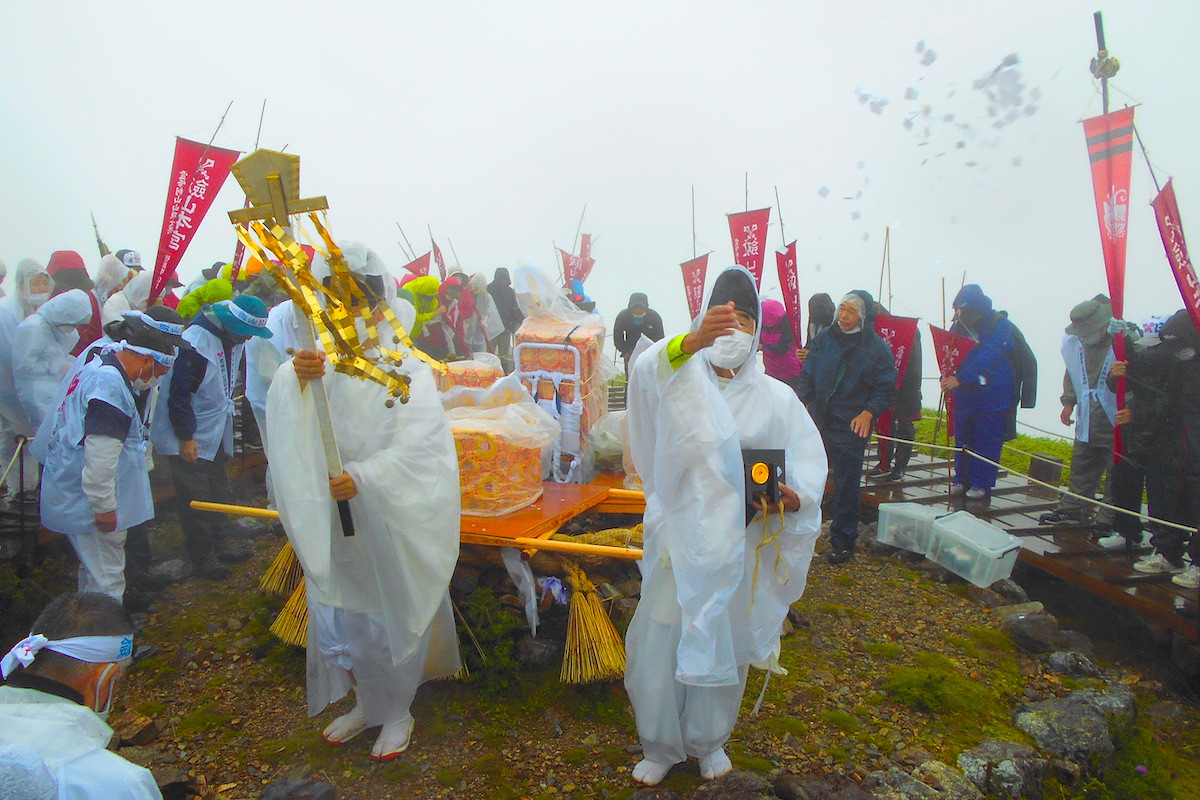 It was indeed an invigorating experience, and if you would also like to attend next time, this festival is held every summer on the first Sunday that comes on or after July 17th, starting at about 10:00am.

But what other mysteries does Mt. Tsurugi conceal? Well in Part 3 I will explain how this mountain is also home to perhaps one of Japan’s most unique, if not most incredible, legends.

For info about the Inbe Cultural Study Group and updates on their preparations for the next Tsurugi Festival, check their website:

(Text and Photos by: Shaun Lamzy)