The power of Shikoku’s Yoshino River

As it cuts its way through the mountains of central Shikoku, the mighty Yoshino River forms a pair of gorges which have been naturally developing for million years. Stretching about 8km in length together, the two gorges are home to dramatic scenery that includes craggy rock formations, dense mountain forests, roaring rapids, and tranquil pools of emerald colored water. 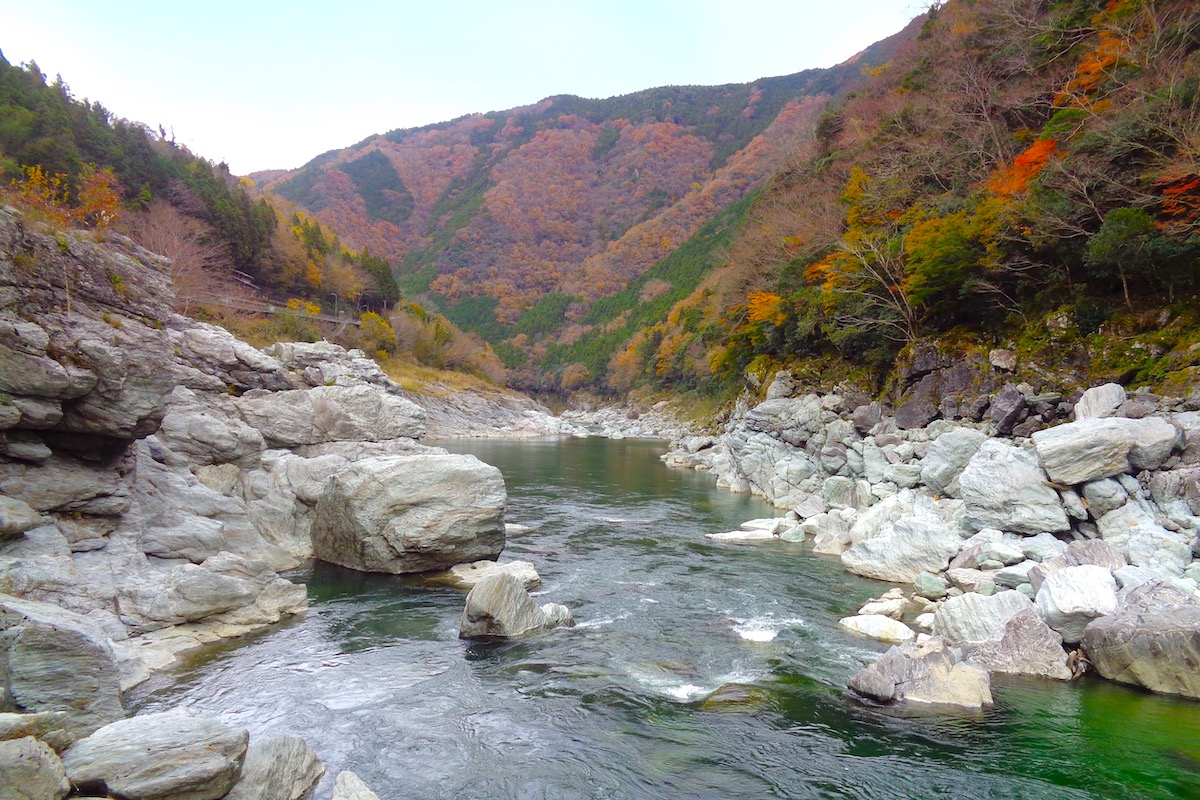 Upstream along the river is Oboke Gorge, which is the more renowned of the two if only because most local businesses use the Oboke name.

But just downstream along the Yoshino River is neighboring Koboke Gorge, which not only offers equally stunning views, but it is also known for having some of the best river rafting in Japan. 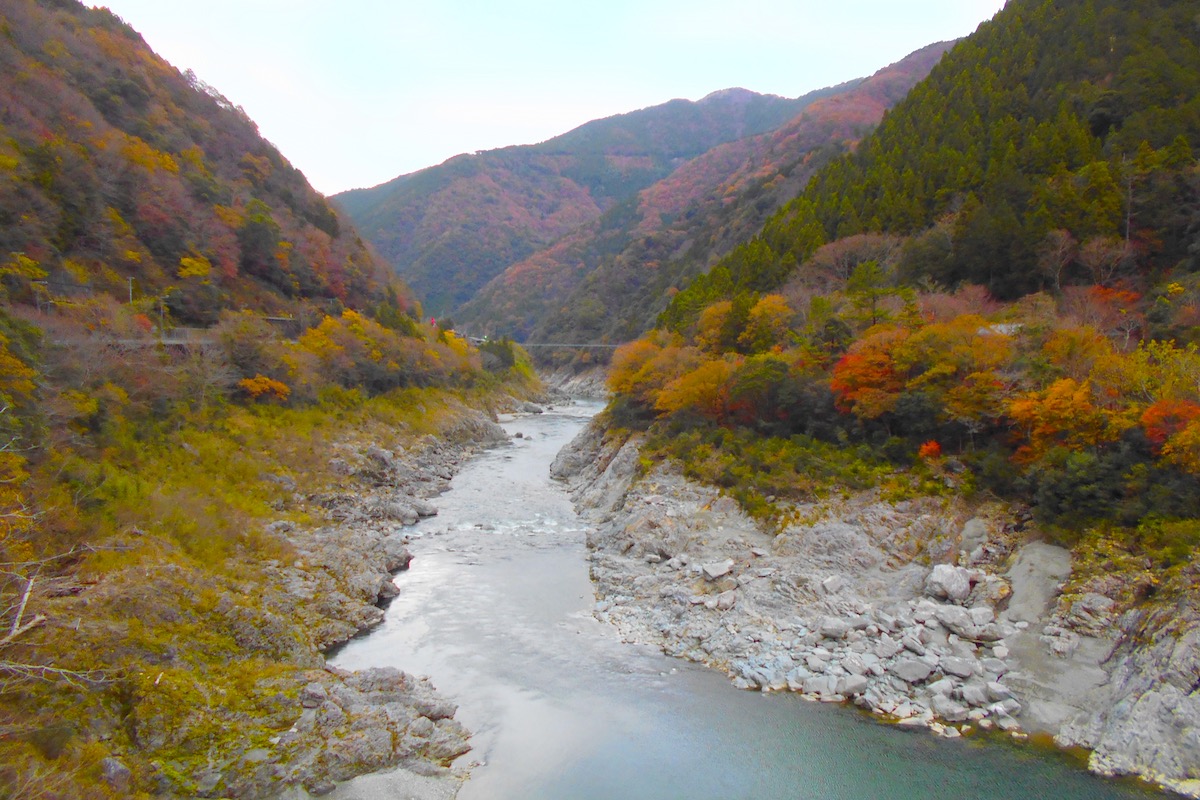 Together, the Koboke and Oboke Gorges are considered a National Place of Scenic Beauty and are part of the Tsurugi-san Quasi National Park.

The names Koboke and Oboke translate as “Small Step Danger” and “Big Step Danger” respectively, and it is said by the local people that these names come from how in ancient times people felt that walking through these steep canyons was a rather precarious undertaking.

Nowadays, both gorges have much easier access, with the most common way being via National RT 32, which follows the Yoshino River and goes directly through both Koboke and Oboke Gorges. Connecting Takamatsu City to the north with Kochi City in the south, RT 32 is the main artery across central Shikoku. 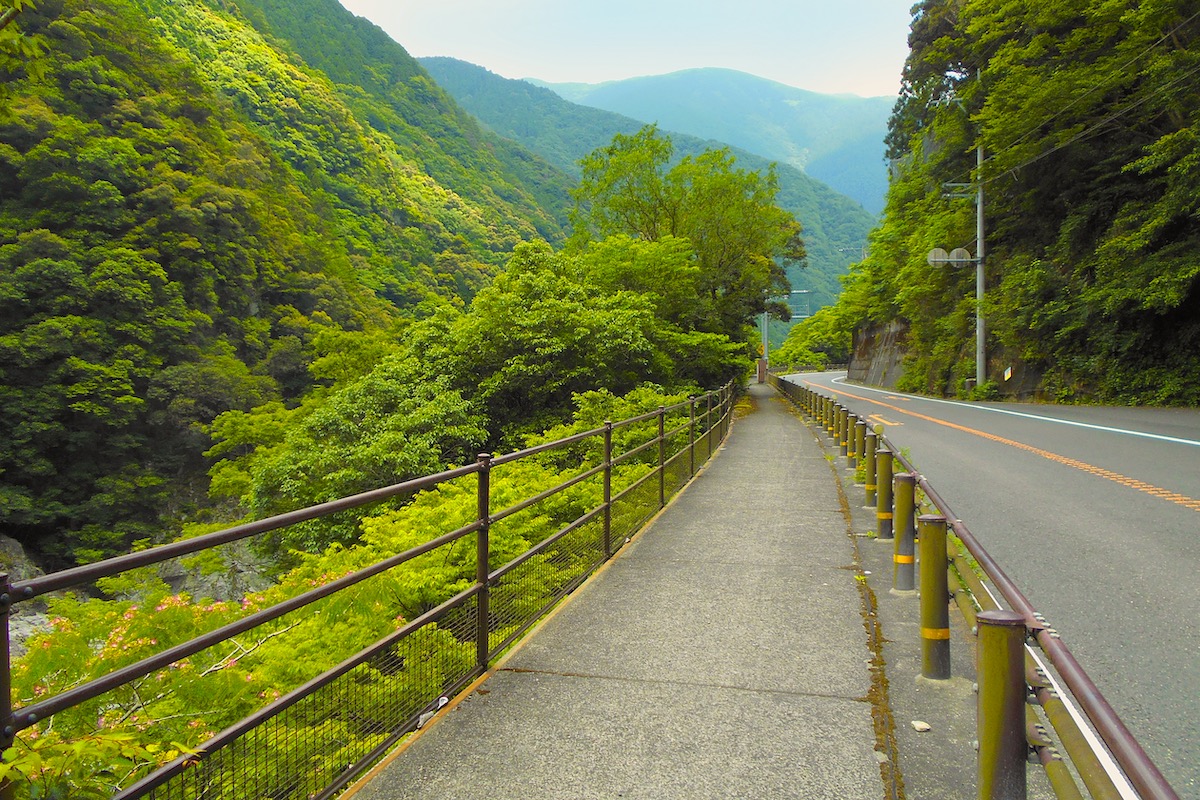 Koboke Gorge is about 5km long and most visitors usually enter by driving south on RT 32 from the Ikeda Town part of Miyoshi City. Within 5 or 10 minutes from Ikeda the surrounding mountains begin to close in steeply on the road and river as you enter the Yamashiro Town part of Miyoshi. A few minutes after passing the small downtown section of Kawaguchi in Yamashiro, a sign along the road announces the start of Koboke Gorge, but even before reaching the sign it feels like you are already in Koboke Gorge. 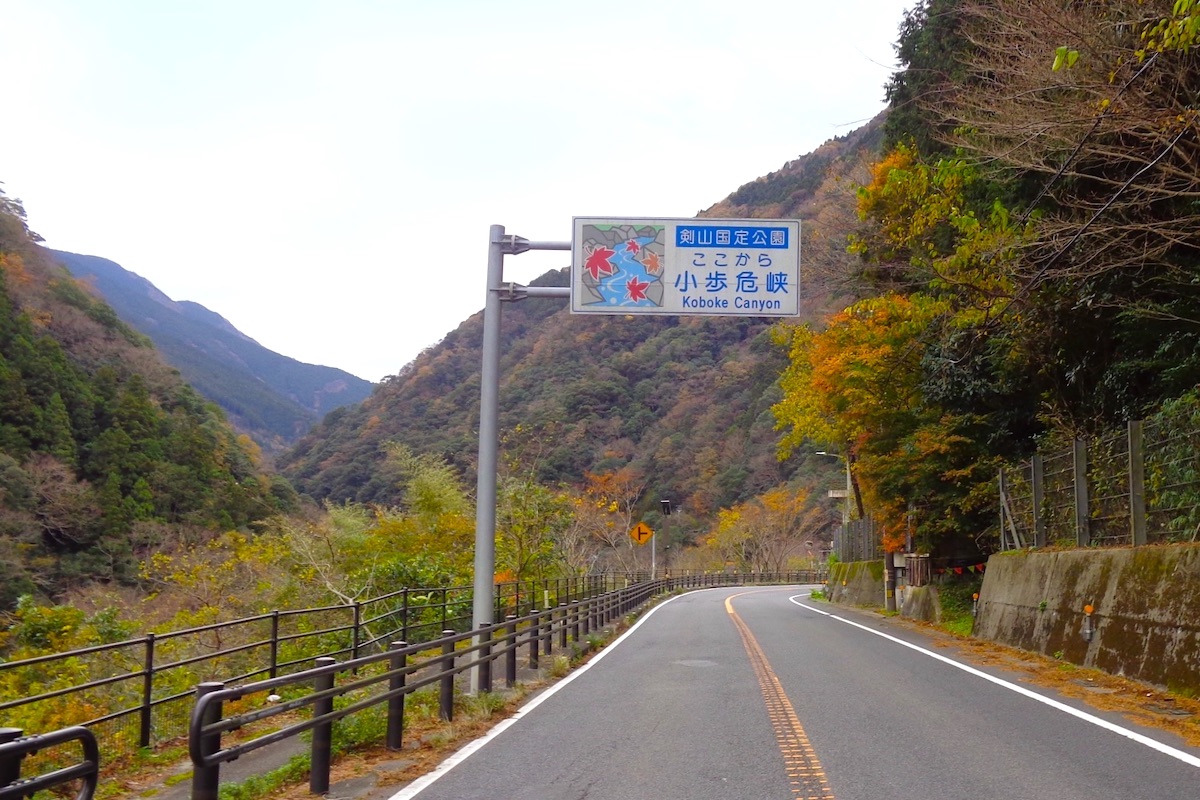 From here heading south, the well traveled road is full of scenic views as it slowly weaves its way through the rugged Koboke landscape. Eventually RT 32 leads almost seamlessly into Oboke Gorge at a point just before the WestWest service area.

Public buses also ply this route, and the buses going through here connect Ikeda and Kawaguchi to Oboke and neighboring Iya Valley. There are several bus stops within the Koboke area.

The JR Dosan line is another access method, and it follows the same route as RT 32. The views from the train are quite nice, however a good portion of the train route within the Koboke area does go through a tunnel. But the train line does cross the river over a bridge just at the border point between Koboke and Oboke (between the SunRiver Oboke Hotel and WestWest service area), and from here the views looking either north or south are certainly impressive. 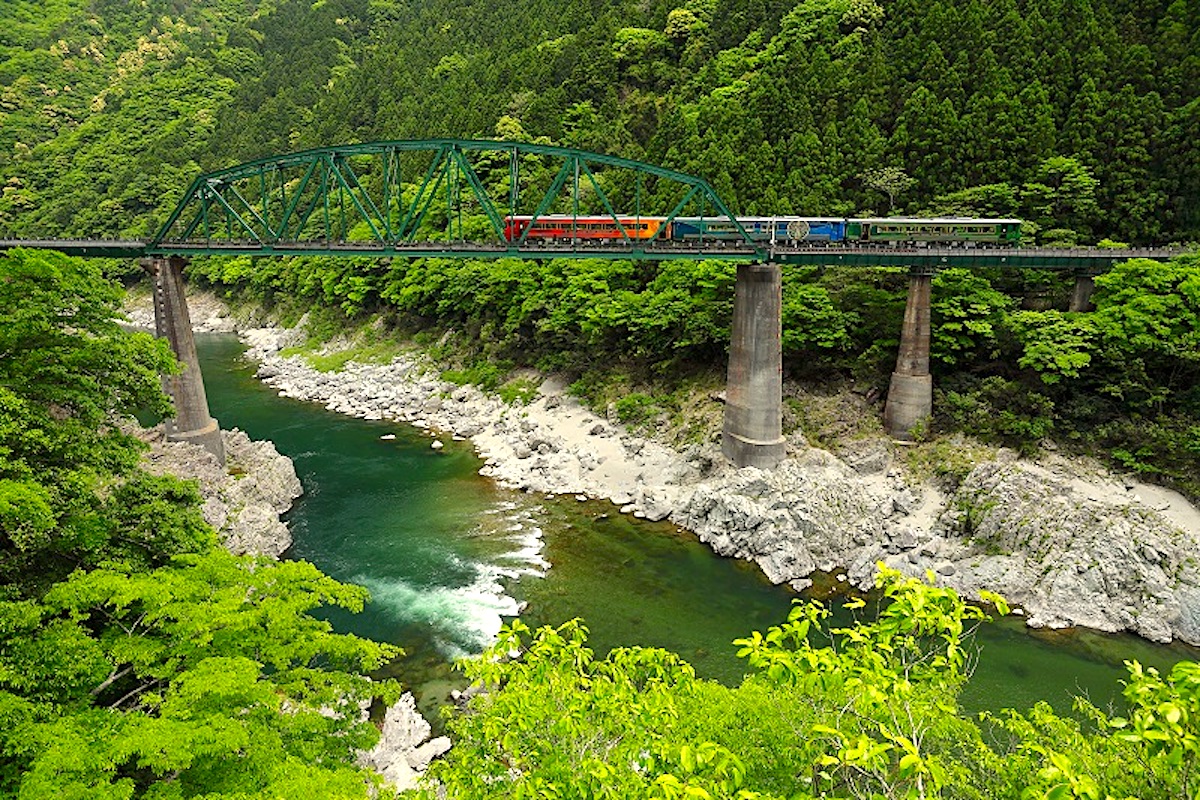 The only train station within Koboke is the tiny and aptly named Koboke Station. Opened in 1935 when the Dosan train line was completed, only 7 local trains stop here per day, but no limited express trains make this stop. (Limited express trains stop at Oboke Station to the south or Awa-Ikeda Station to the north, and from either it is possible to take a bus to Koboke.) 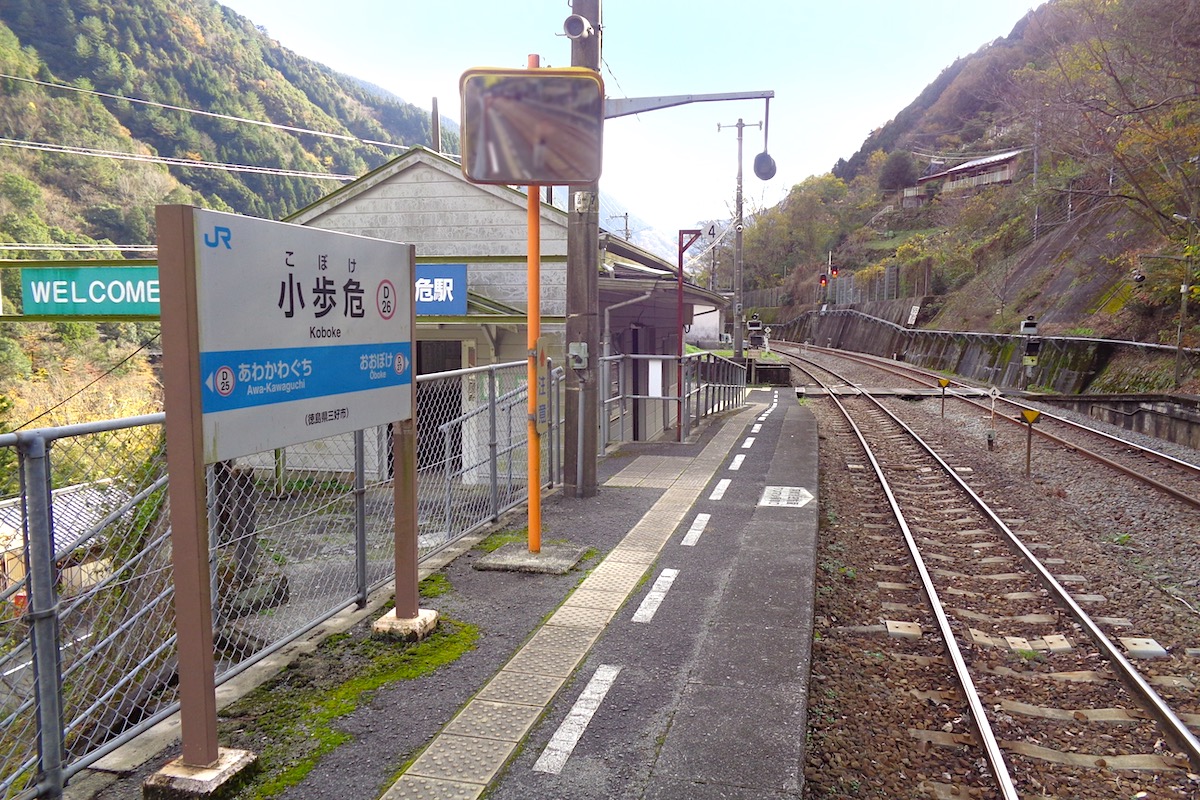 Take your time for the best views

But perhaps one of the nicest ways to enjoy the gorgeous views would be by walking through Koboke. Unlike in ancient times, a well-constructed walking concourse goes along the roadside through both Koboke and Oboke Gorges, and this now allows anyone to take both big and small steps without any danger. 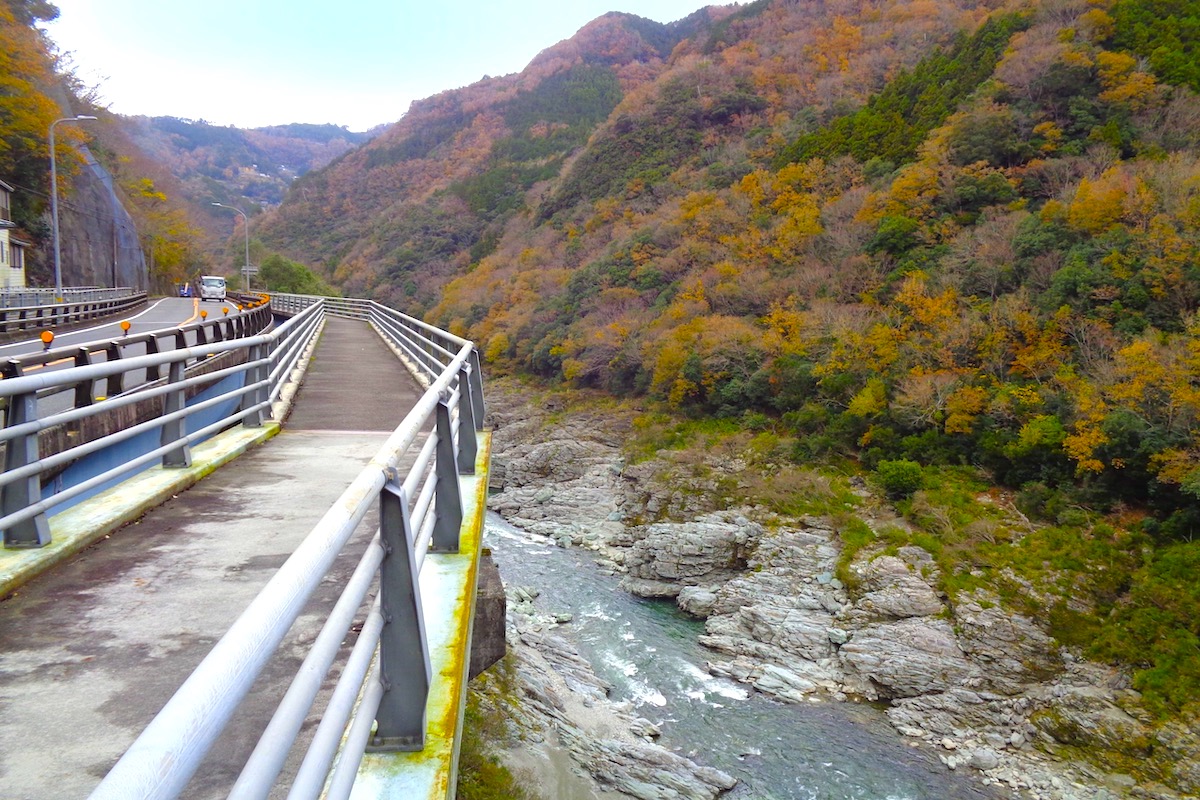 The walking path offers a variety of viewpoints, and one of the best ways to encounter Koboke as well as Oboke on foot would be to take a train or bus into Koboke and then walk back out to the Oboke Station area (or vice versa).

In Parts 2 and 3 we will introduce some of the places to stop within Koboke which allow for fantastic views and other activities.

For more information about the Koboke and neighboring Oboke areas, see here: