At 1520m, Ochiai Pass is the highest drivable road in Tokushima’s Miyoshi City and the second highest mountain pass in Shikoku. Aside from the amazing views into the Iya Valley, there are also hiking trails of various lengths and difficulty which lead off from the pass to the neighboring mountains.

The roads up to Ochiai Pass

Ochiai Pass can be approached from two directions, either from the north via Higashi-Miyoshi Town, or from the south via the Iya Valley. The road is paved the entire way from either direction.

In this article we describe the drive up via the Iya Valley which takes about 30 minutes from the bottom. 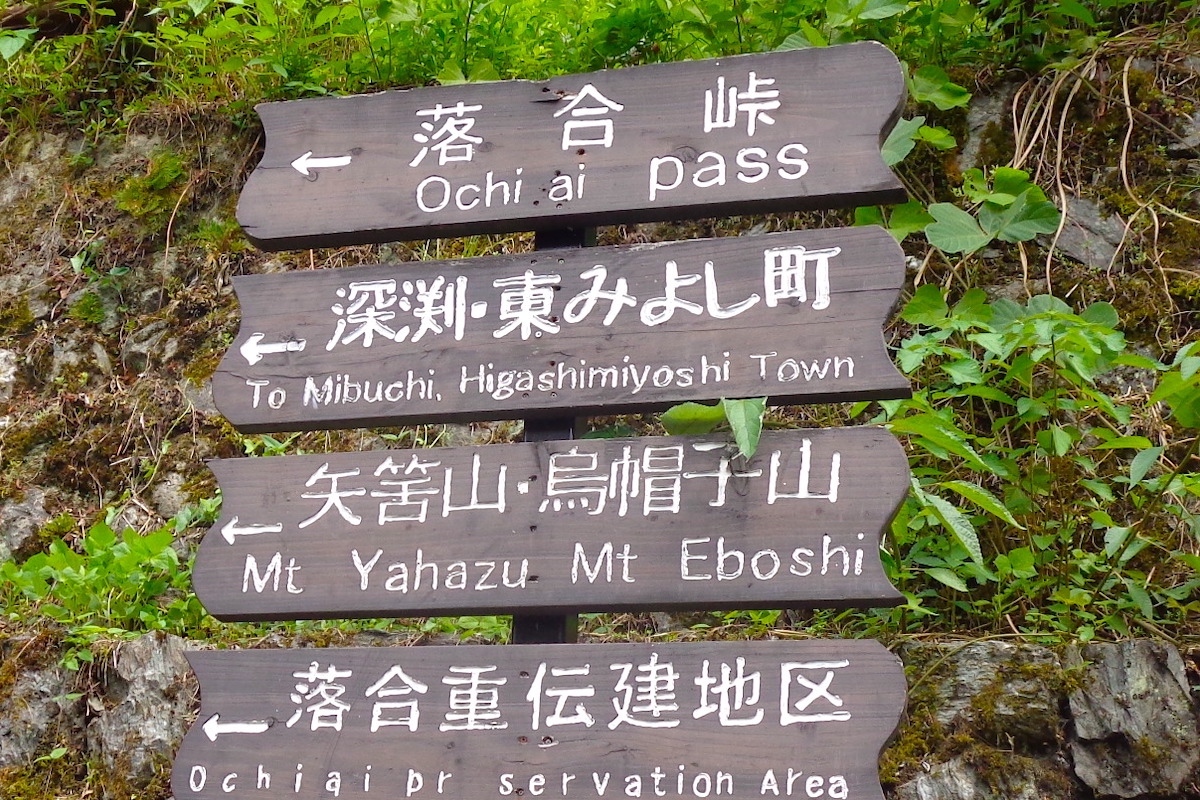 Alternately, the drive from central Higashi-Miyoshi Town takes about 1 hour along Prefectural Route 44.

However, both of these routes are fairly remote, and as you approach the pass there are no houses or development, so be sure to have a reliable car and enough gasoline. And since the road goes over 1500m in elevation, it is closed in the winter due to snow (November to March), and the road may also be closed due to heavy rain any time of year.

As its name implies, Ochiai Pass is situated on the mountain ridge directly above historic Ochiai Village in the Higashi-Iya area (East Iya, also called “Oku-Iya”) of Tokushima’s Miyoshi City.

Ochiai Village is accessed via the main road through the Iya Valley, which is National Route 439. At the base of the village there are signs (in English) which show where to turn for Ochiai Pass. 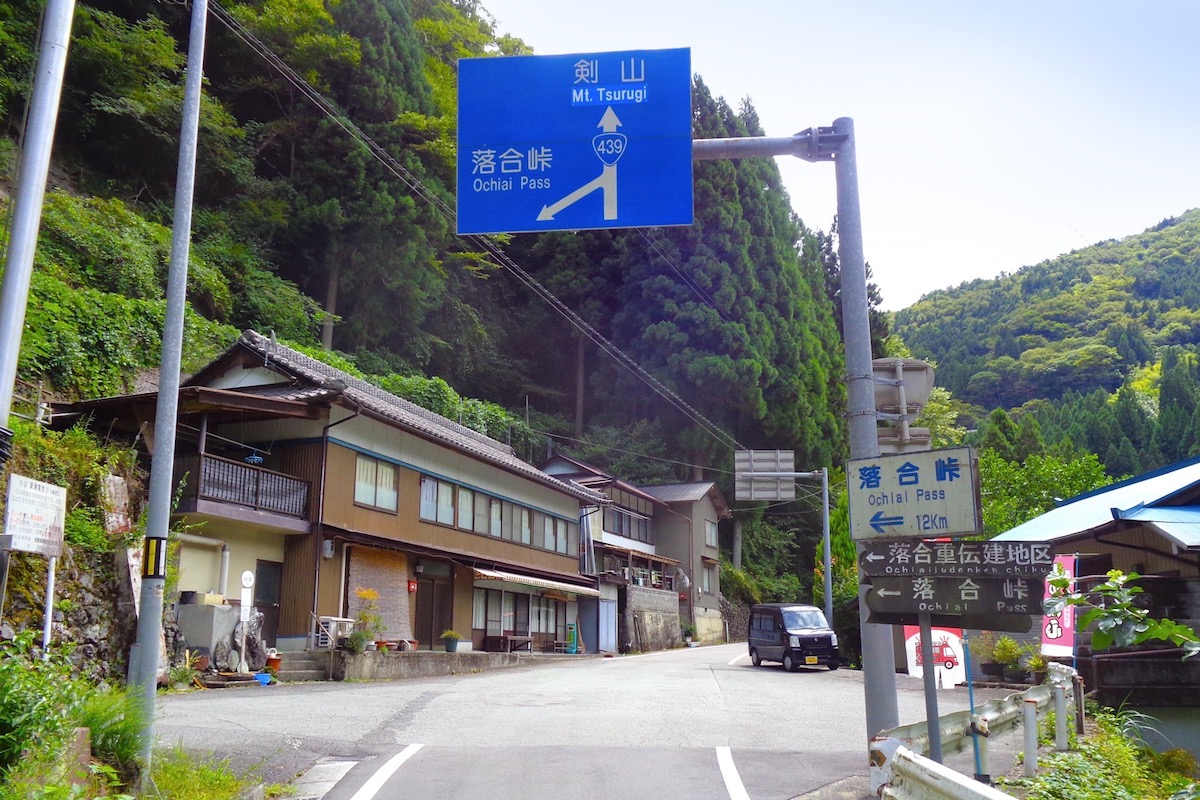 For the first couple minutes, the access road goes up through some forest, and then the road goes across the center of Ochiai Village. It is possible to see some traditional thatched roof houses along here. 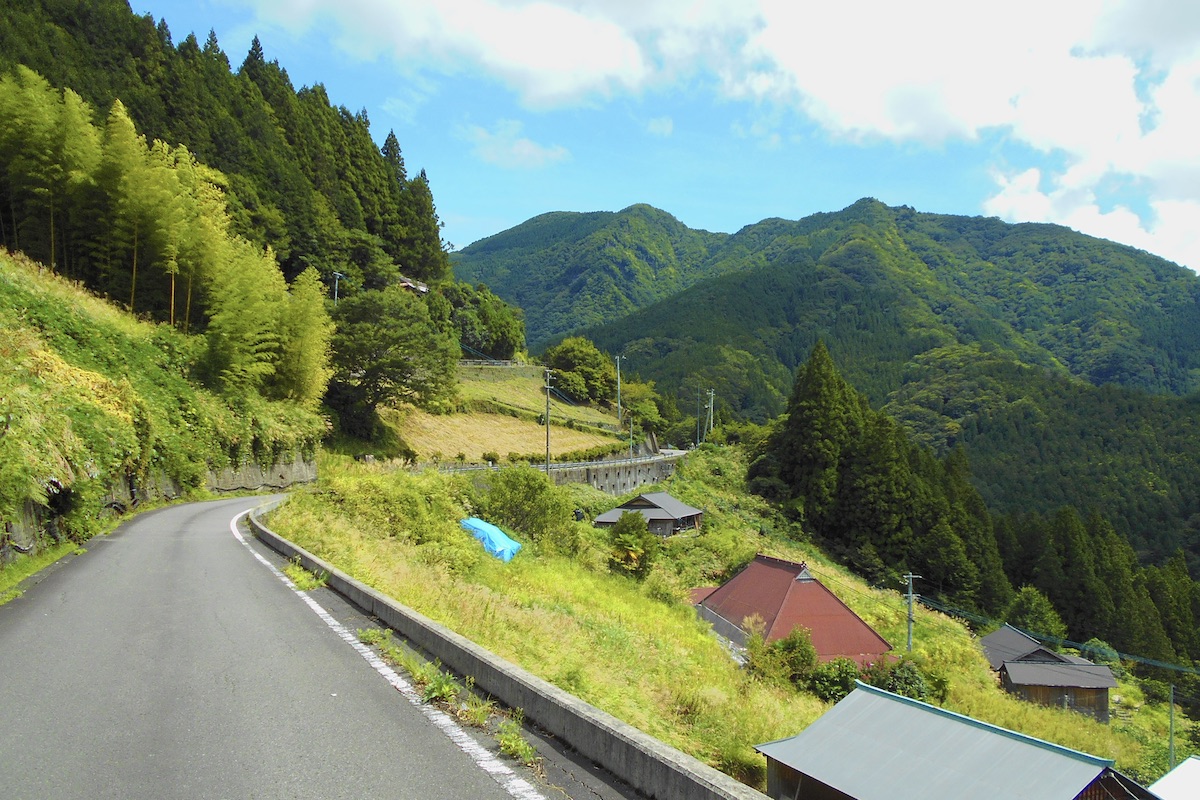 Just after the village, the road re-enters the forest and the road becomes a bit more rough. It is constantly uphill for the next 25 minutes or so, with lots of twists and turns. The road is only one lane the whole way, but there is hardly ever much traffic, maybe just a few logging trucks. But do be careful on the sharp curves for any oncoming vehicles.

Also, be careful of any rocks that have fallen on the road, which can be pretty common. This is definitely not a place to go cruising in a low rider! 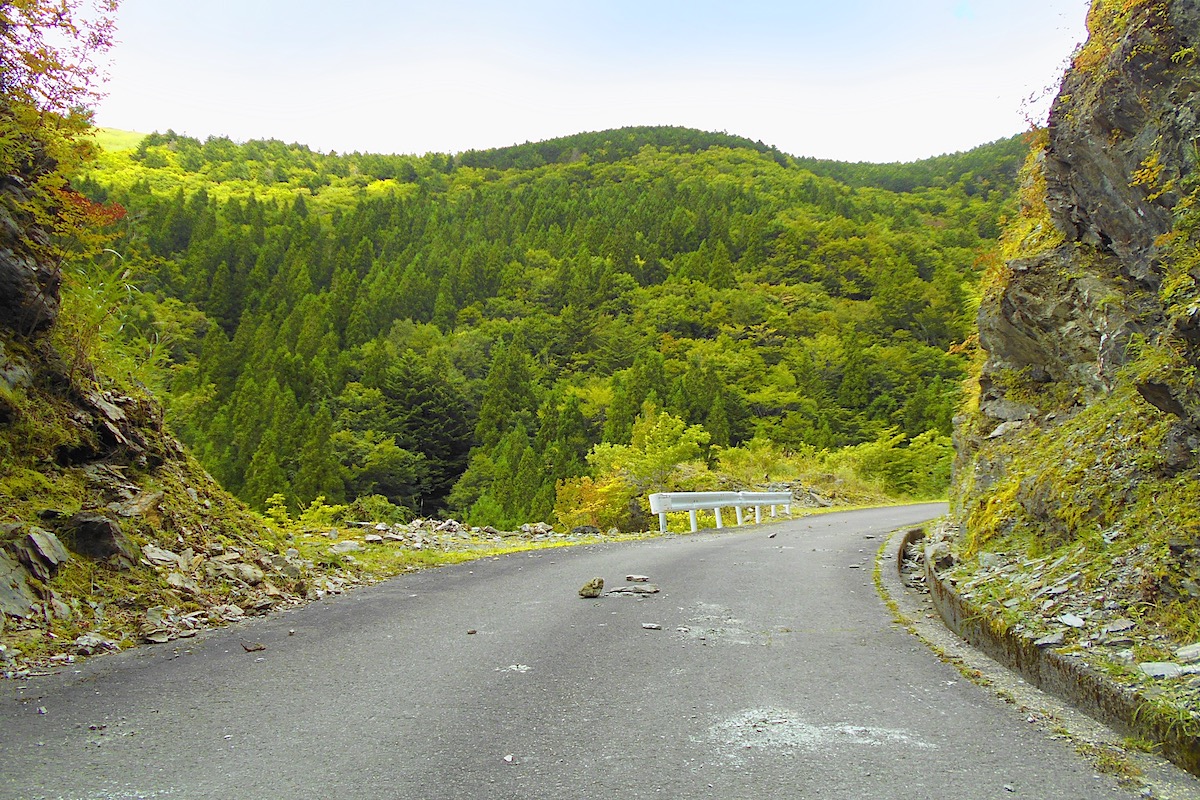 After driving up through the forest (which can be quite lovely in autumn) the trees start to thin out and you will eventually come to a shrine area which is just a minute or so from the top of the pass. 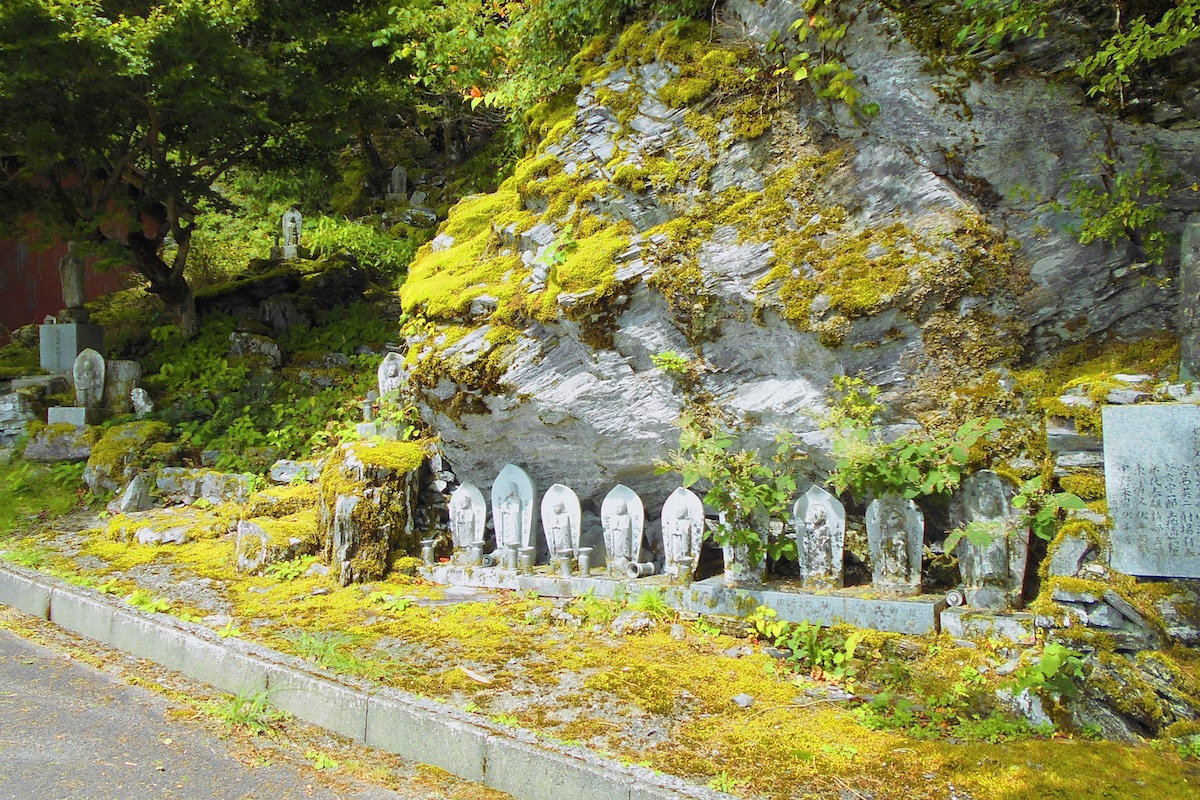 There are lots of stone monuments along the roadside here which give an other-worldly feel.

Next to the shrine area is the Ochiai Pass Emergency Shelter Hut. Though it is available to sleep in, it is rather dusty and disheveled inside, and really only suitable in, well, an emergency. 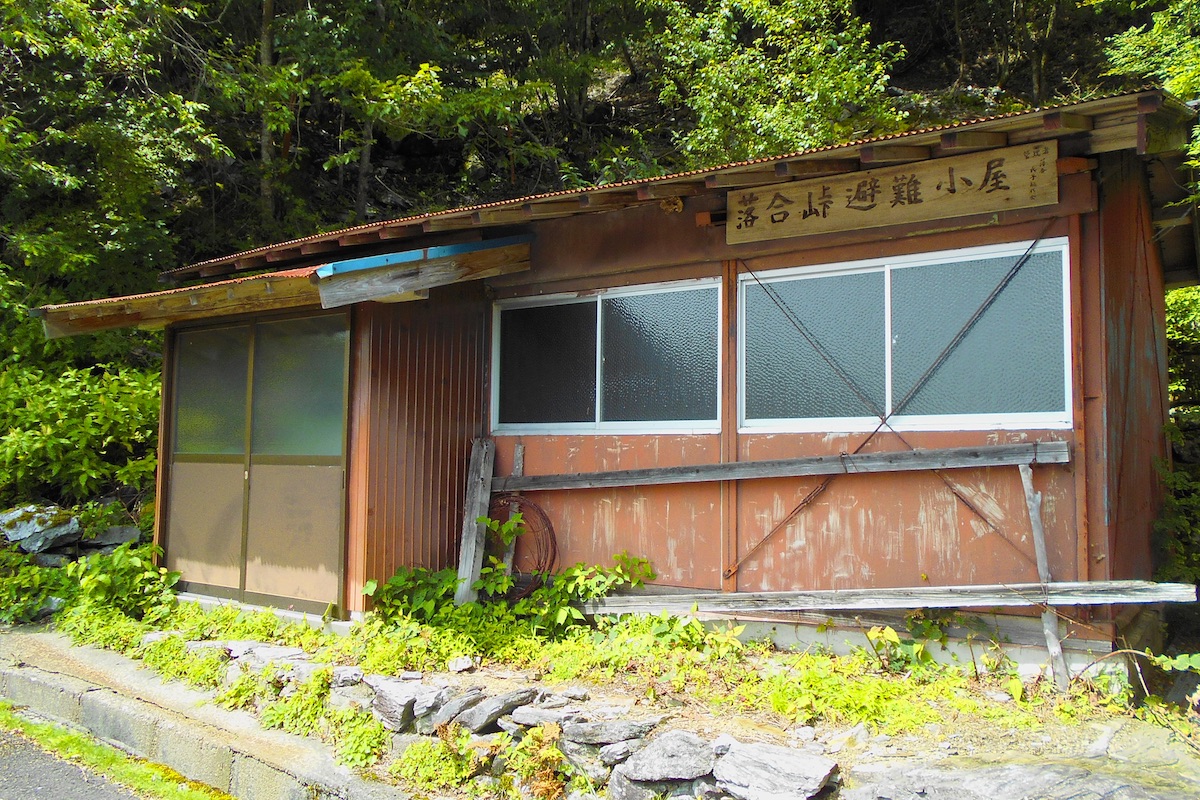 About a hundred meters beyond the hut and shrine is a small side-road which leads down to the left for the parking area. Continuing straight on the main road for another hundred meters leads to the pass itself. 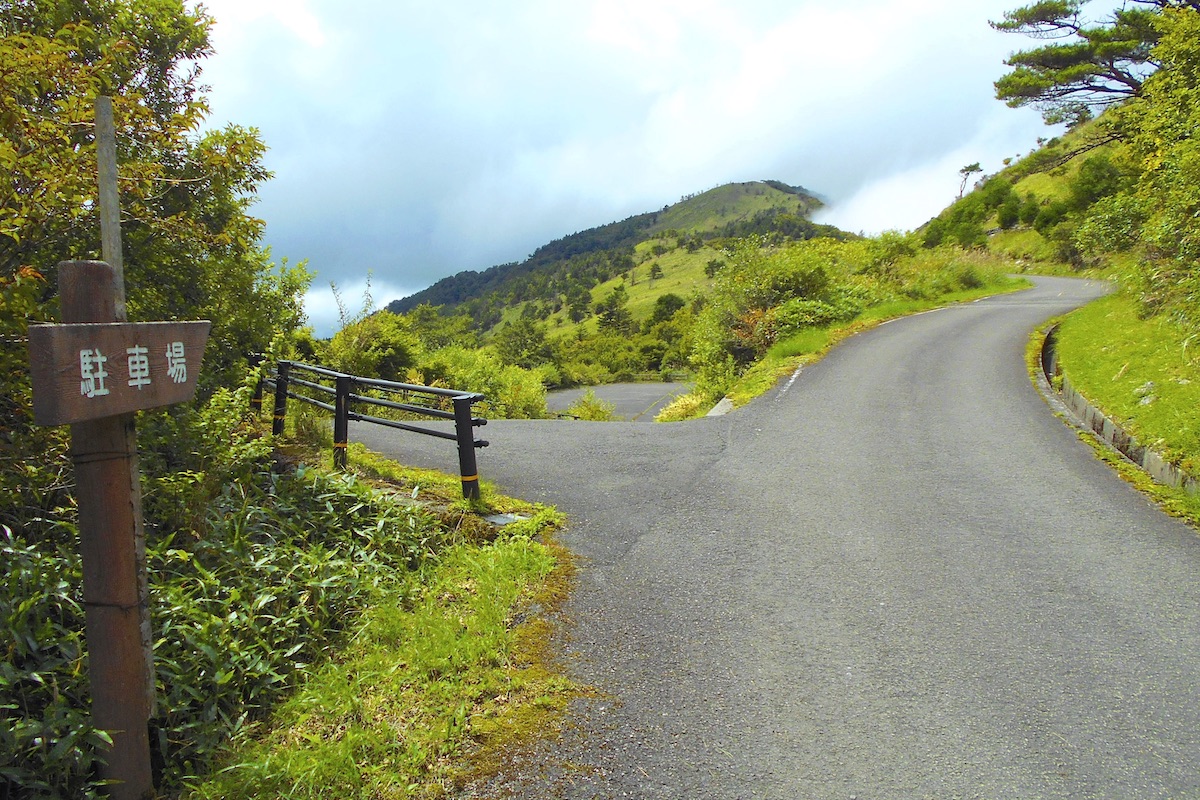 If planning to go hiking from the pass, you should park down here. On the far end of the parking area a walking path leads up to the pass, about a hundred meters away. 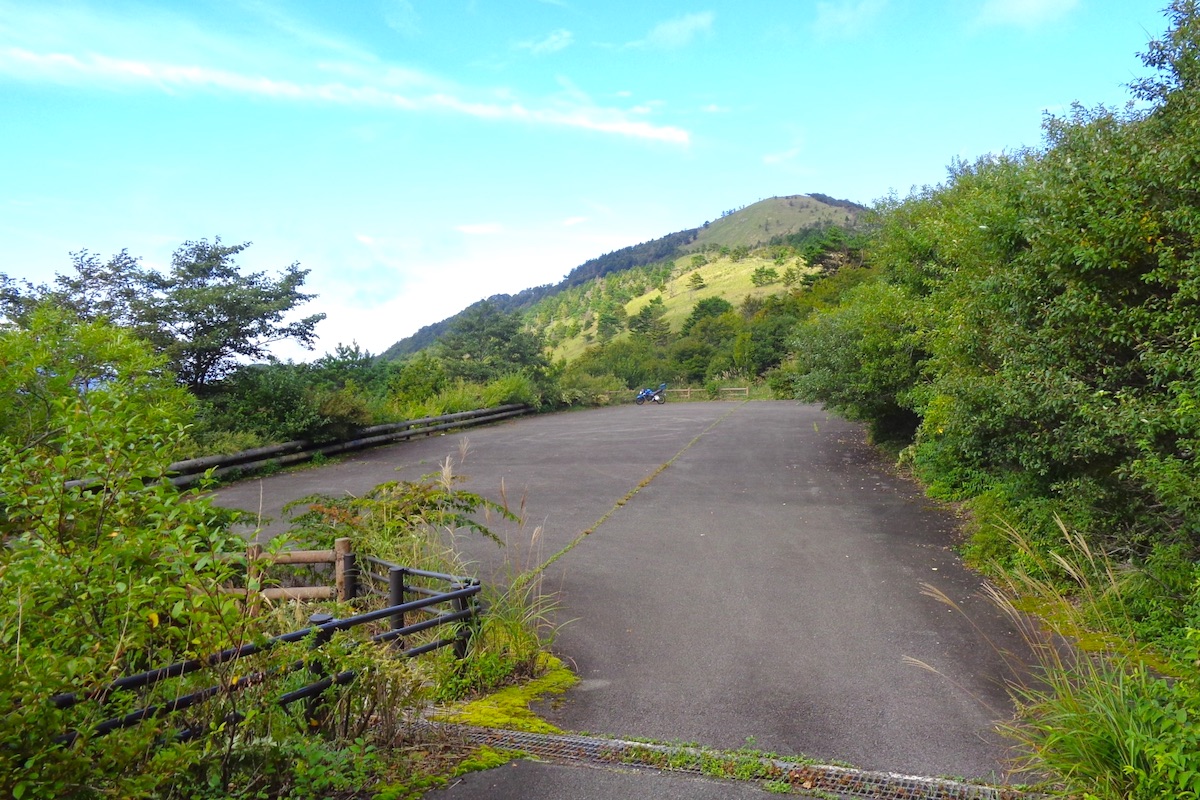 Along the path there are also a set of pit toilets available, located just below the pass itself. They are fairly well kept, but there is no water or electricity here. 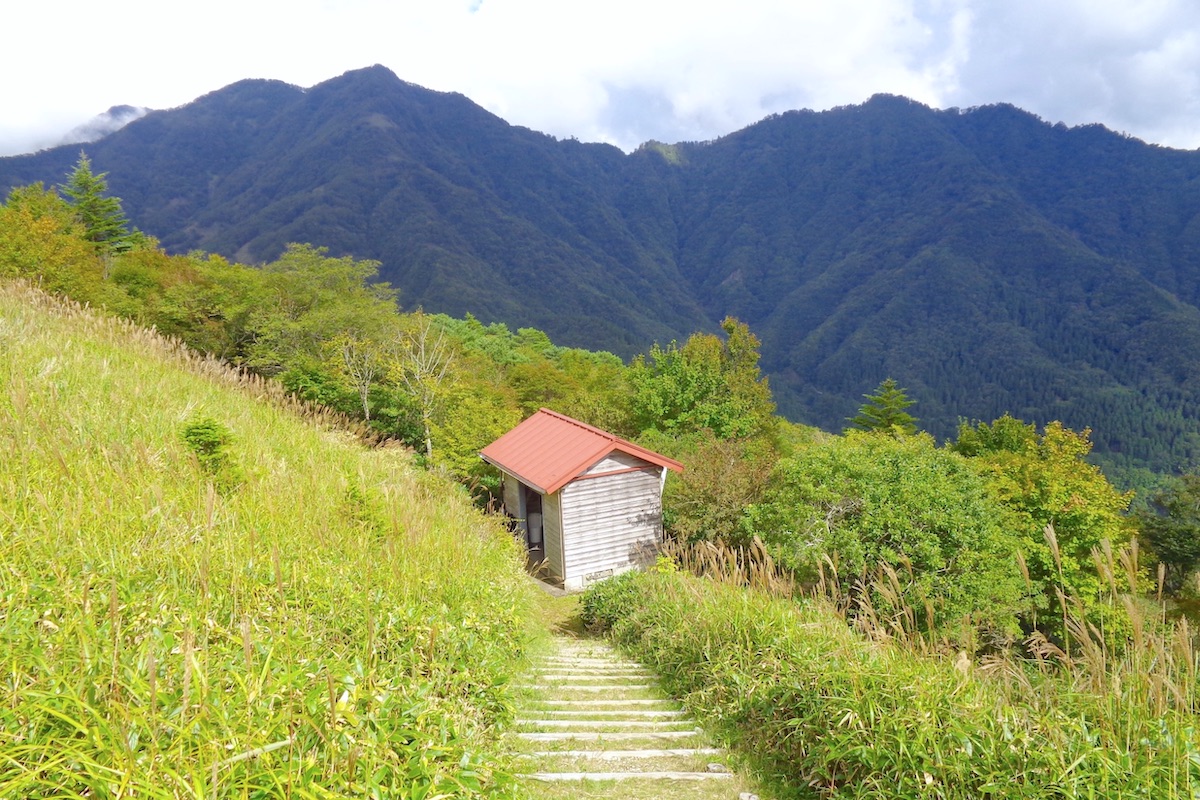 The top of the 1520m high Ochiai Pass has a tall wooden marker. There are only a few trees up here and the surrounding hills are covered with vast meadows of sasa grass.

Looking to the south, the panorama of the Iya Valley’s southern ridge seems endless. 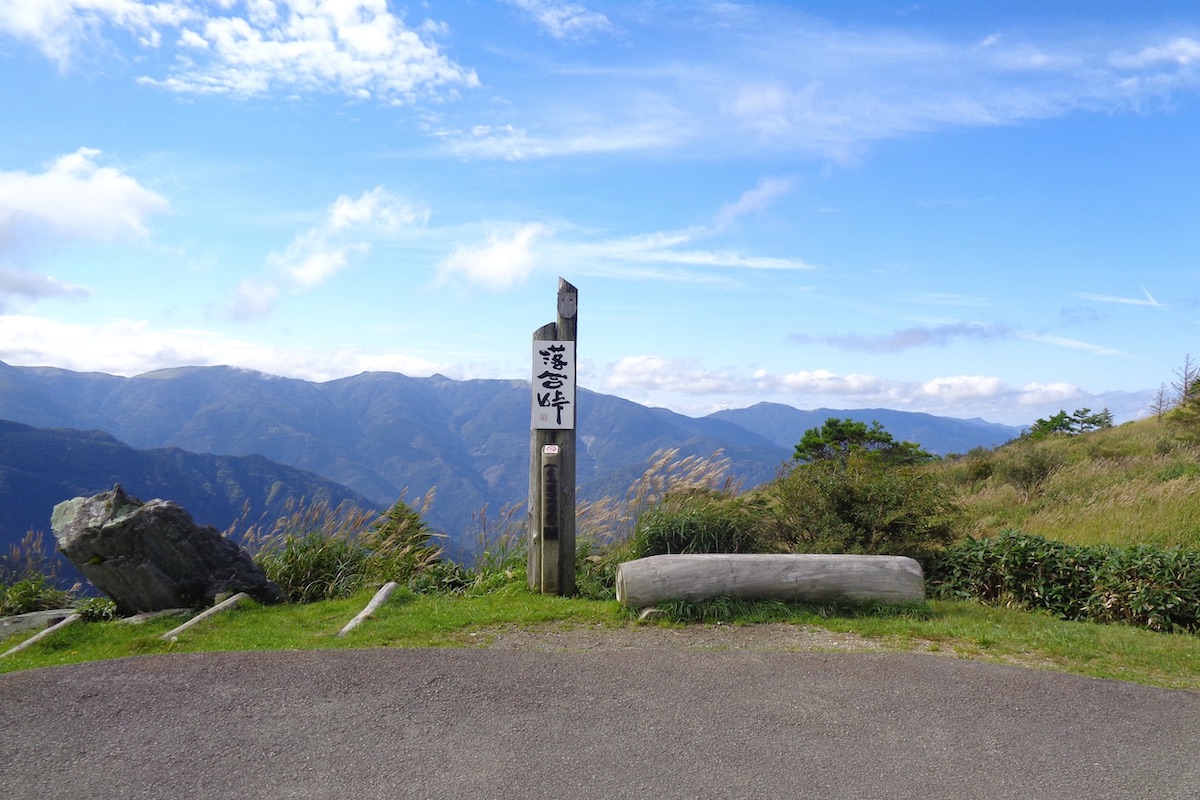 The pyramid-shaped top of Mt Tenguzuka can be seen peeking out from the ridge-line directly across the valley from the pass, and to the left (east) of this is the mighty Mt Miune.

And while the views from Ochiai Pass are indeed breath-taking, if looking for even more expansive encounters you should consider hiking out from the pass along the trails in either direction. Several hiking options lead to a variety of great viewpoints and neighboring mountains, which range in length from 15 minutes to 2 hours or more. 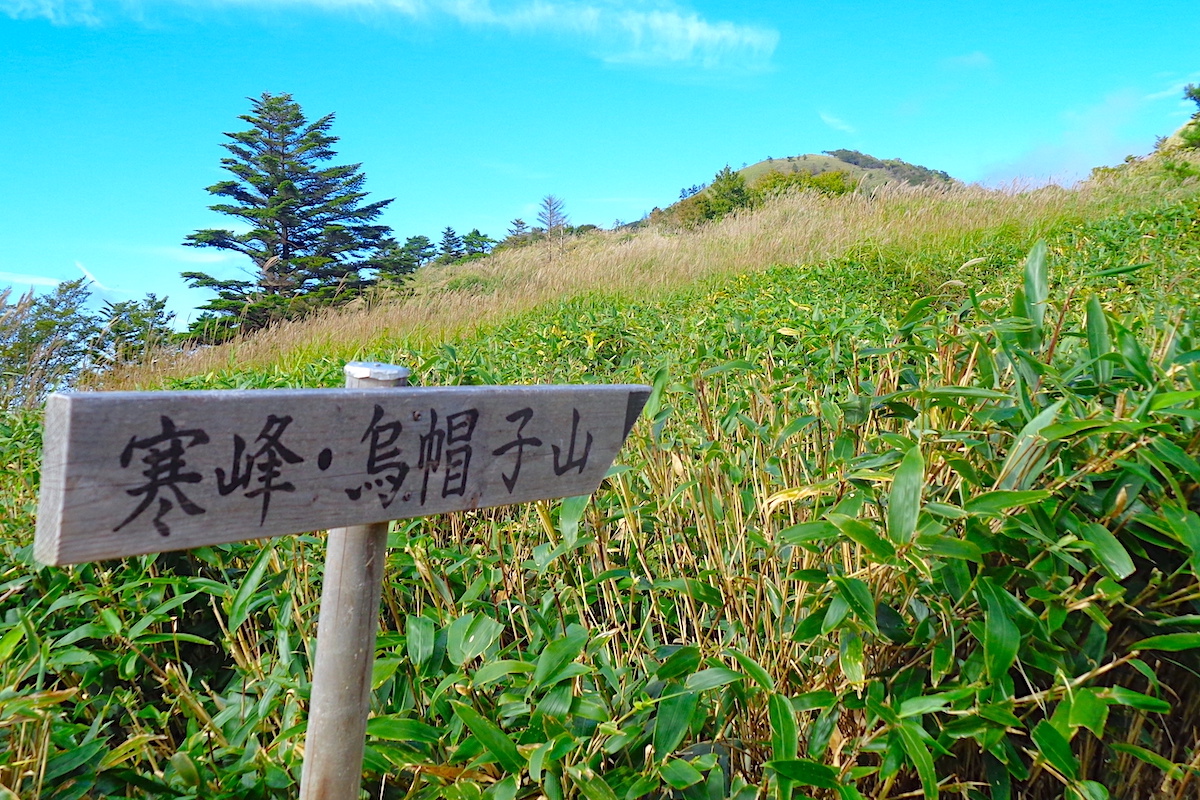 In Part 2 we will detail some of the shorter hiking routes from the pass, and in Part 3 we will explain a longer route to Mt Eboshi.

For more information in English about visiting the Iya Valley, including maps for Ochiai Pass, check the IyaTime website: