Returning to his hometown in Miyoshi City’s rural Iya Valley from the urban outskirts of Tokyo about 30 years ago, Hideo Ichioka has continually made efforts in the local community since moving back to connect the residents and promote the area, while also using his own creativity to enliven the lives of everyone here.

The word “shimbun” is the Japanese word for “newspaper”, however the term “tengo” is unique to the local dialect of the Iya Valley and means “meddlesome” in an affectionate way, such as how one’s mother may uninvitingly “help” you in your life.

So for Japanese people, the name “Tengo Shimbun” itself is an odd curiosity, but the layout of this monthly publication is perhaps even more uncommon.

Entirely hand written every month by Hideo Ichioka himself and printed in color, each edition of this two-sided “news” journal is rife with photos that report on the ever-changing seasons of Iya as well as whatever else may be happening in the valley. 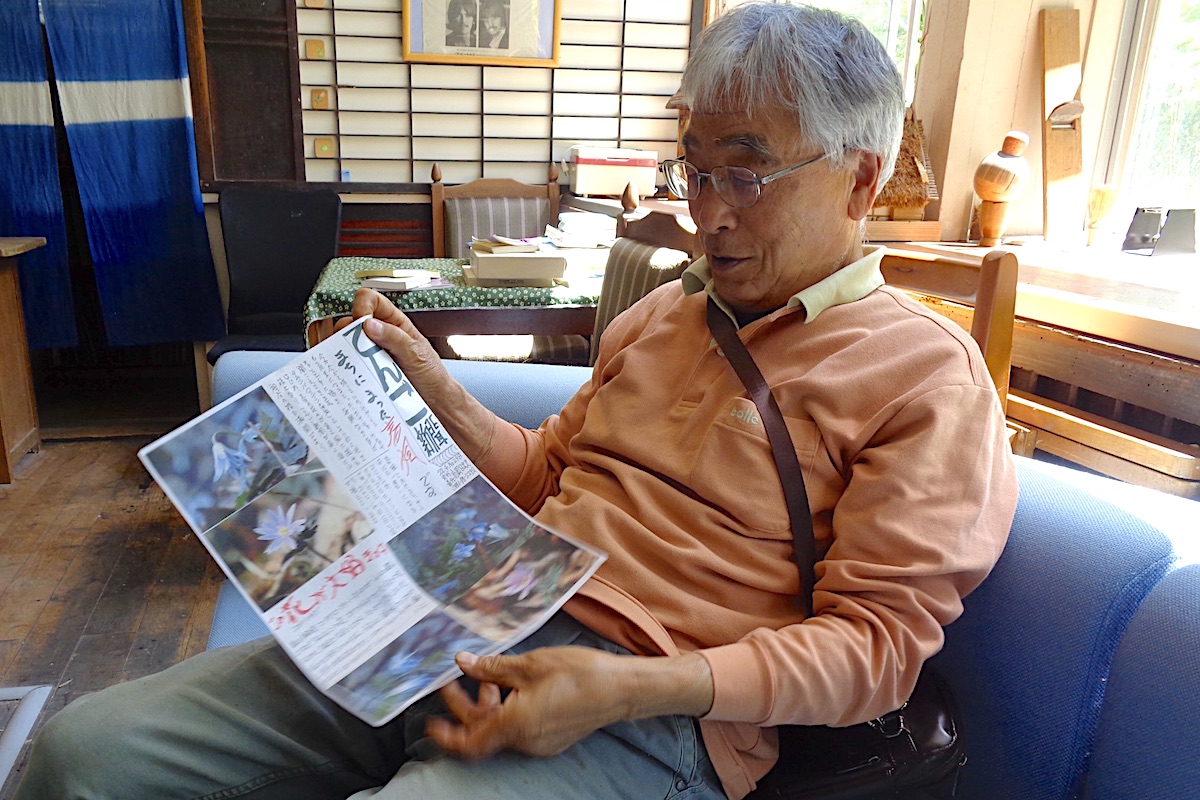 It is the only locally-based newspaper in the Iya Valley, and though it is not available for direct sale, the most recent copy can usually be found on display in various places around the area.

The start of Iya’s revitalization with “Tengo-no-Kai”

Ichioka moved back to the Iya Valley in December 1993 and the town was already in a situation of depopulation. In response to the decline, an organization called “Tengo-no-Kai” (Group of Meddlesome People) was formed within a few years of his return in order to promote local revitalization.

The organization soon decided to create a newsletter that reported on their activities and Ichioka was in charge of producing it. For the original versions of this “Tengo Shimbun” only about 30 copies were printed. 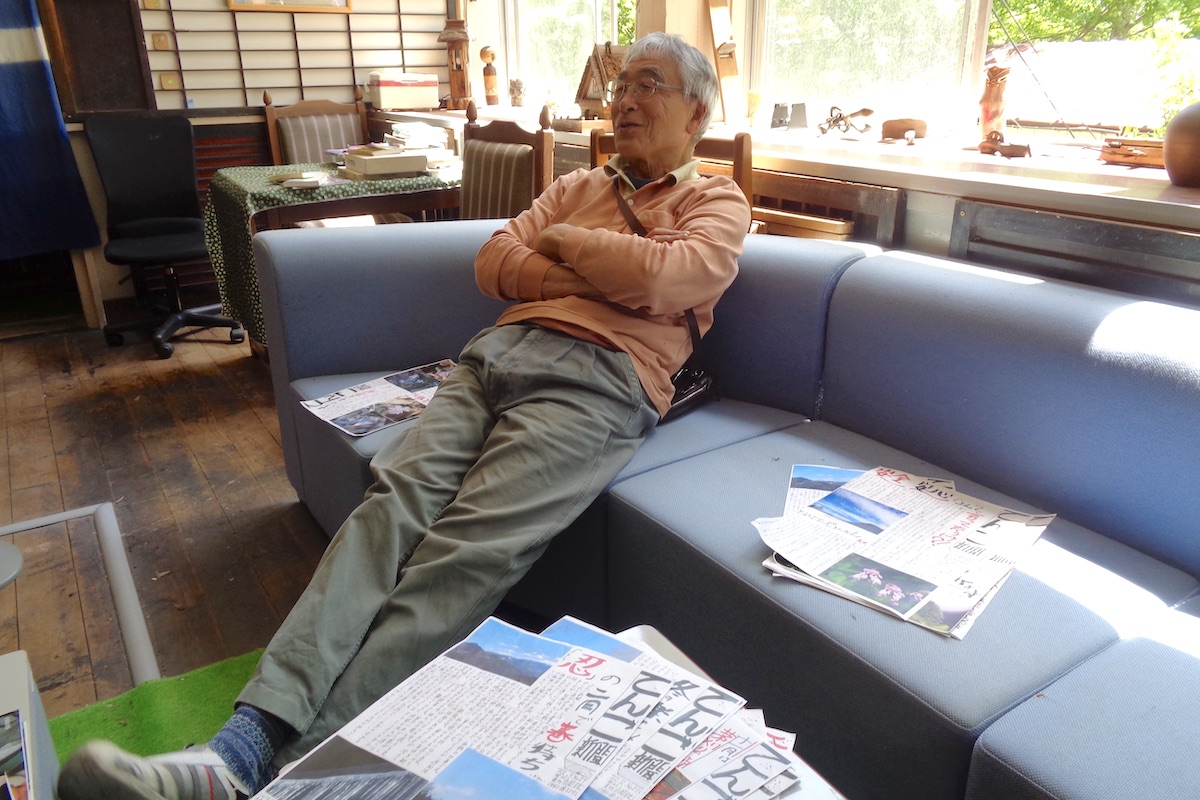 But as time went on, Ichioka took great pleasure in writing the newsletter, and within a couple years he decided to expand it beyond just reporting on the organization. He began publishing the Tengo Shimbun every month with topics all about Iya, and the number of readers slowly began to grow.

This month, (June of 2022) the Tengo Shimbun is celebrating its 25th year with the publication of its 300th edition. From its sporadic beginnings, this long-lived newspaper has now expanded to a circulation of over 300 copies per month.

Furthermore, the readers are not just the residents of Iya or the rest of Miyoshi City, but Ichioka has subscription requests from all over Japan, from Hokkaido to Okinawa, and there are even people that get it who live overseas. 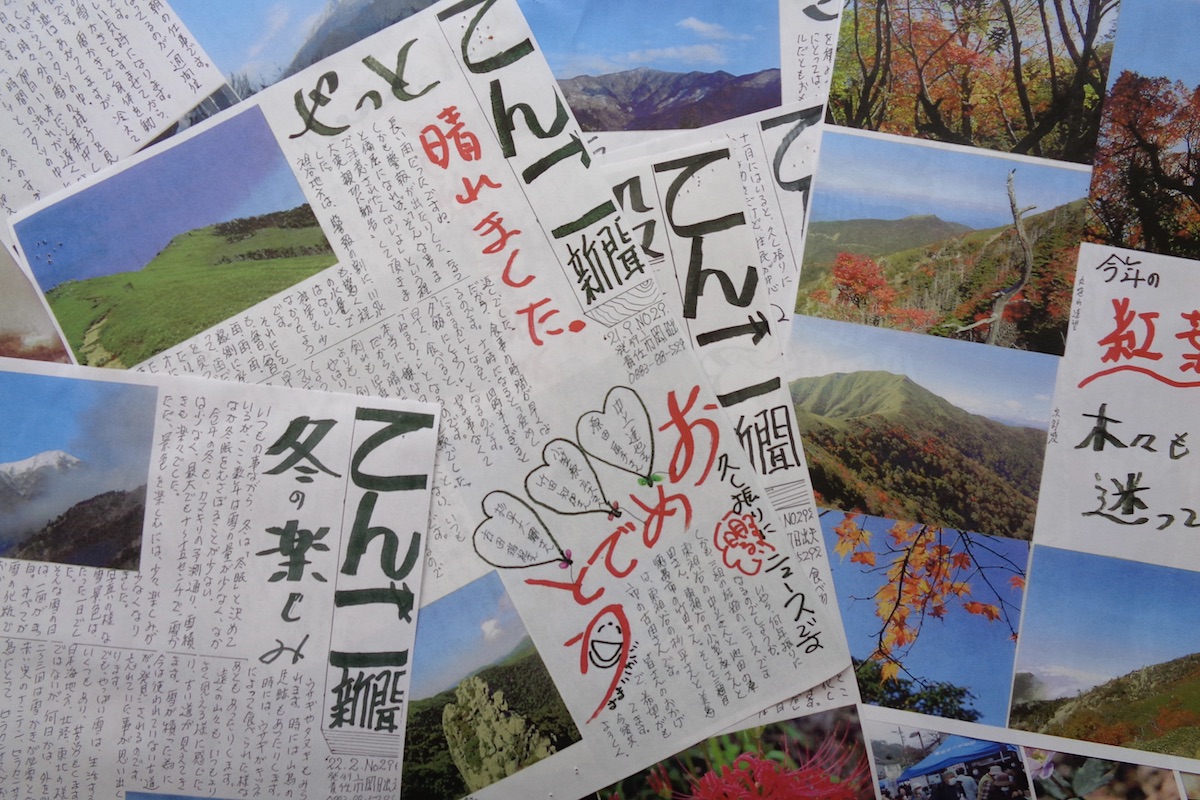 But in considering how isolated the Iya Valley is, how did this hand-written newspaper about the life and times of such a far-flung place expand so much?

The Great Amalgamation and the loss of the “village”

Around the year 2006 there was a centralized effort throughout Japan by the national government to merge together as many municipalities as possible in an effort to streamline administration. Prior to then, the area of Oku-Iya (Deep Iya Valley) was officially know as “Higashi-Iya Yamason” (East Iya Mountain Village) and it was an independently governed municipality.

But under the merger drive by the national government, six of this area’s neighboring towns and villages, including Higashi-Iya Yamason, were amalgamated together to form what is now Miyoshi City. The Oku-Iya section would still be officially known as “Higashi-Iya” but the rare and precious classification of “Yamason” (Mountain Village) would be forever gone.

Disappointed in the loss and concerned Iya would become even more forsaken in the shadow of the “city”, Ichioka set out to retain the Iya Valley’s historic autonomy and buoyant local spirit by establishing an organization called “Kassai Iya-mura” (Lively Iya Village) which declared itself an independent village within the city. And of course, Ichioka was elected to be the village head. 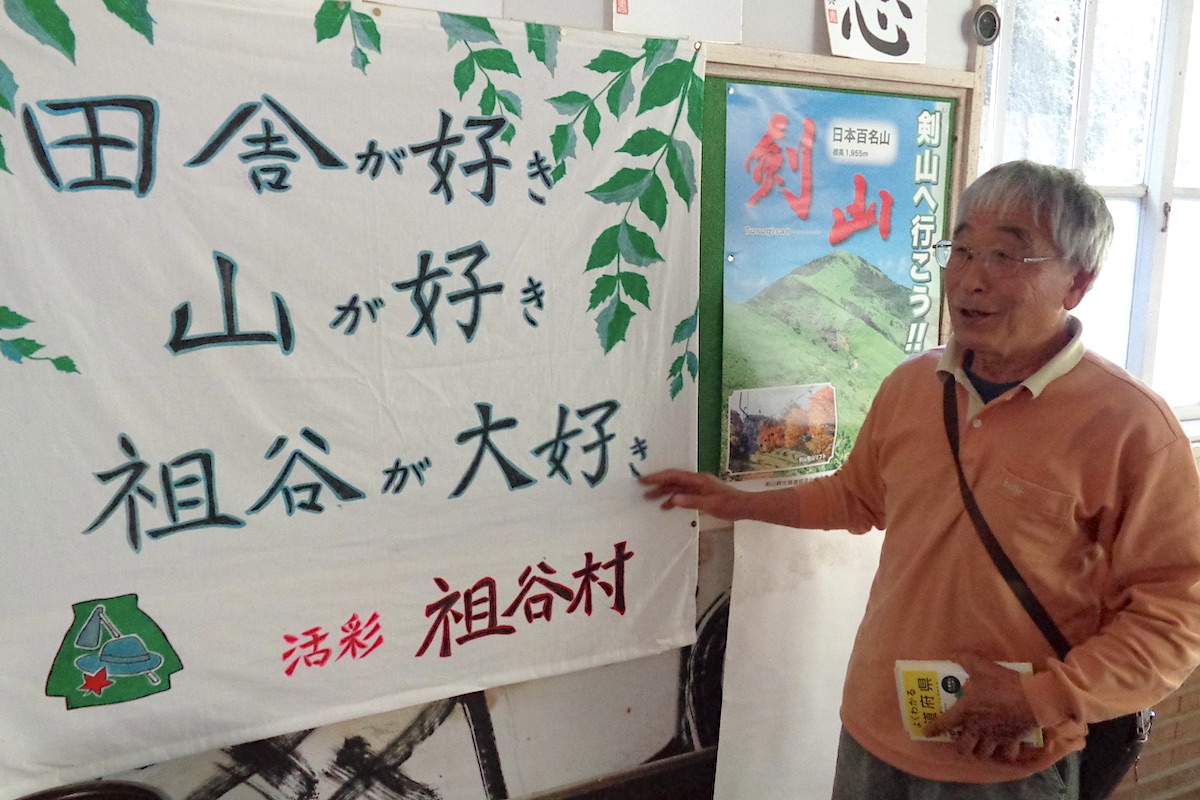 Being that the situation of merging together towns was affecting most communities throughout Japan, when a national newspaper ran the story of how a group of people in a remote little mountain village deemed themselves independent from their newly formed city, it immediately gained national interest. Ichioka subsequently began receiving inquiries from people across the country who were interested in reading his newspaper in support of his project of determination.

So in a way, the town merger which Ichioka rallied against actually turned out to be the vehicle which gave the Tengo Shimbun a national readership.

A Letter from Iya

Without any draft, in un-erasable pen, and in one constant burst of creative expression, Ichioka spends about two hours each month hand-writing out the entire Tengo Shimbun. “There’s probably some mistakes,” he explains, but it doesn’t seem to bother him in the least.

The photos included are all by Ichioka himself, usually from the walks he takes in Iya’s mountains. With an encyclopedic knowledge of Iya’s plants, he often includes pictures of rare wildflowers that only the local people know. 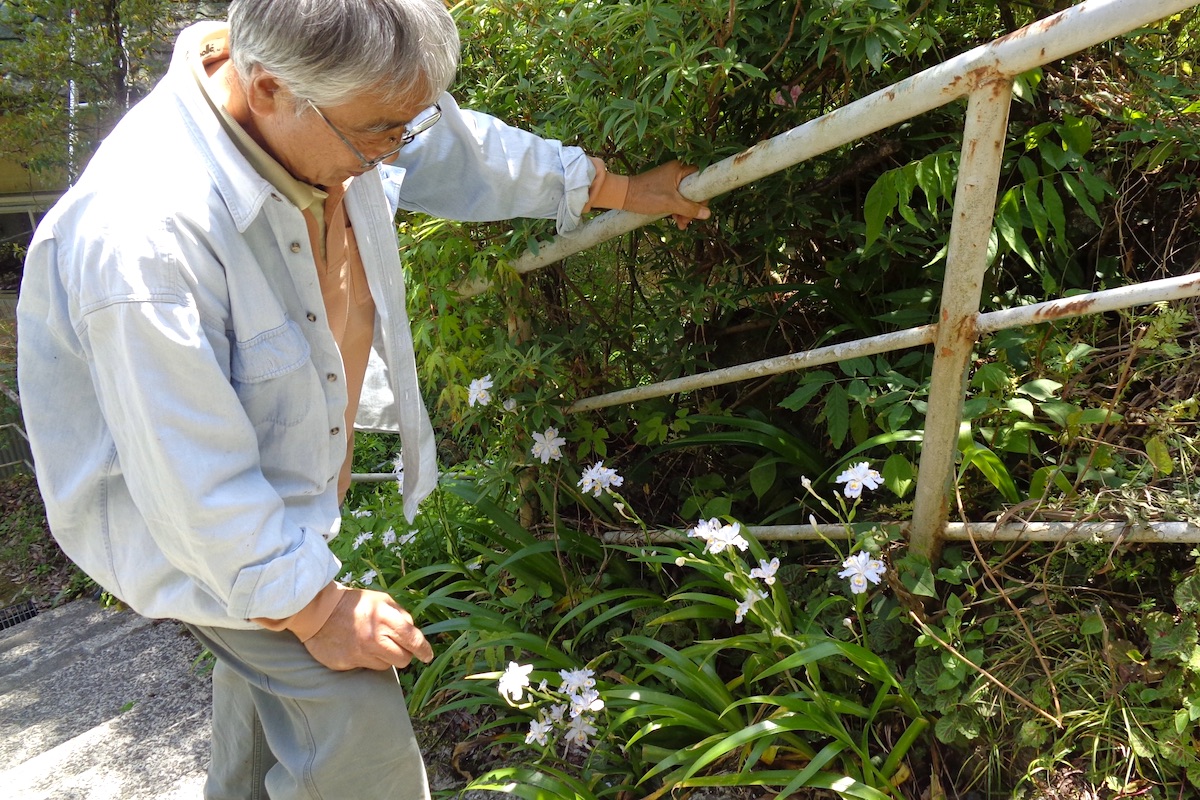 Heartwarming in his reports, the “news” is more akin to reading a letter from an old friend who lives deep in the mountains. Many articles describe the ever-changing seasons, other focus on community events, and some just detail the quaint yet otherwise mundane activities of the local people. But all together they encapsulate a place of hidden beauty that often still feels cut off from the rest of modern Japan.

Ichioka described his widely beloved creation with a laugh, “Even though I made no promises and I have no rules, I feel (my only rule is) that I need to continue.” 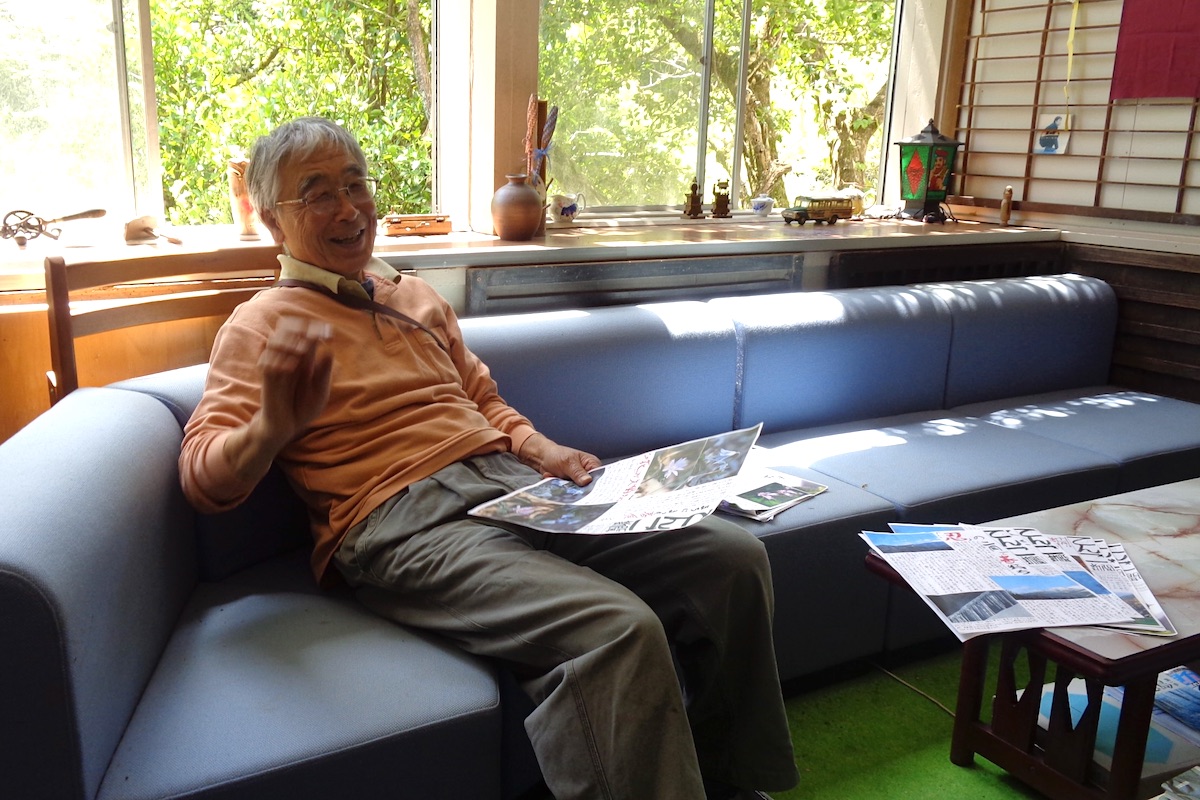 He explained how so many people now look forward to getting his newspaper that he feels obliged to maintain the happiness his efforts have created. “Some readers even send me packs of stamps so that I’m able to keep on mailing it to people.”

In Part 3 we’ll find out about the Oku-Iya library, which was also created by Ichioka.