Situated within the mountains of central Shikoku, nearly 90% Tokushima’s Miyoshi City is covered with forests. With hopes to deepen people’s connections with this vibrant landscape, the municipality held a “moku-iku” training course on April 29th to create instructors who can promote sustainable forest activities with residents and visitors.

After sanding and handling our sets of wood blocks, instructor Fukushima had us take our wares into another room in the building. In here there were several tubs of water set up, and we were all spilt into different groups. 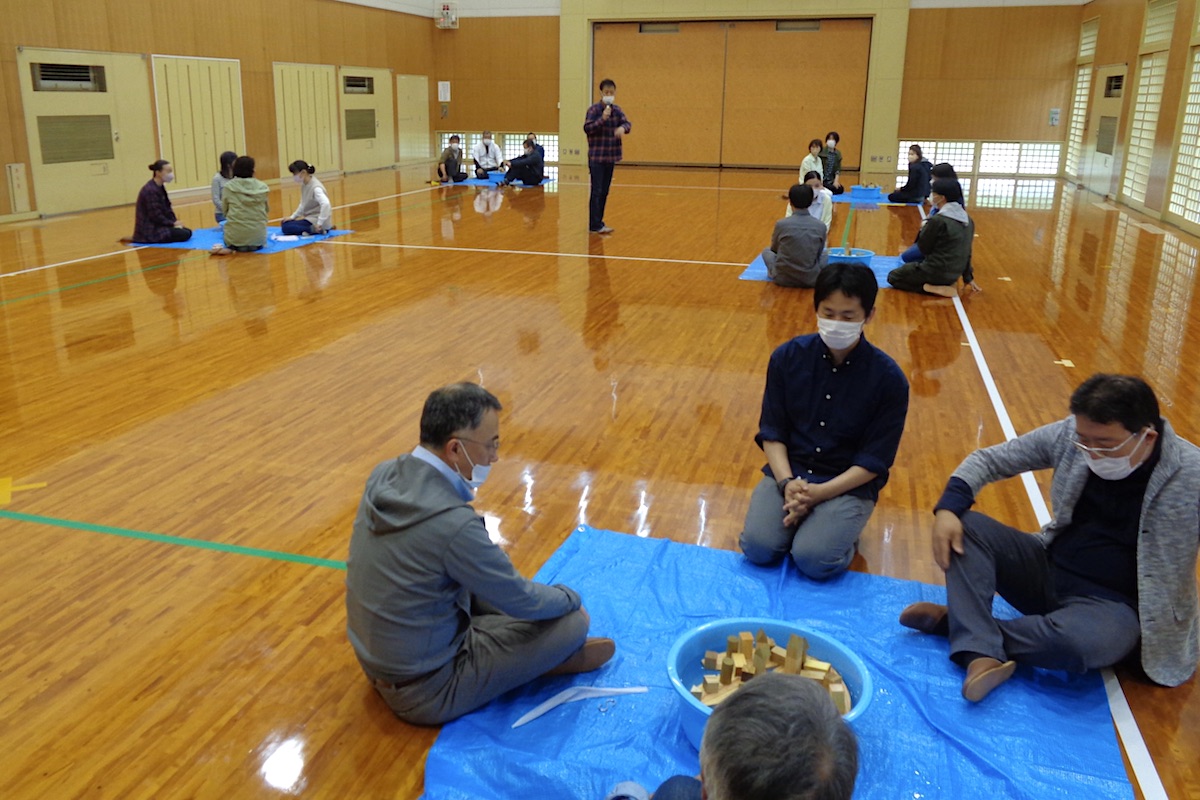 We were then given basic instructions for trying to float our blocks of wood like boats in the water. The first instance was fairly straightforward and easy, but gradually Fukushima would introduce an additional requirement for how were were to balance the blocks, such that with each further attempt it became evermore playfully challenging. 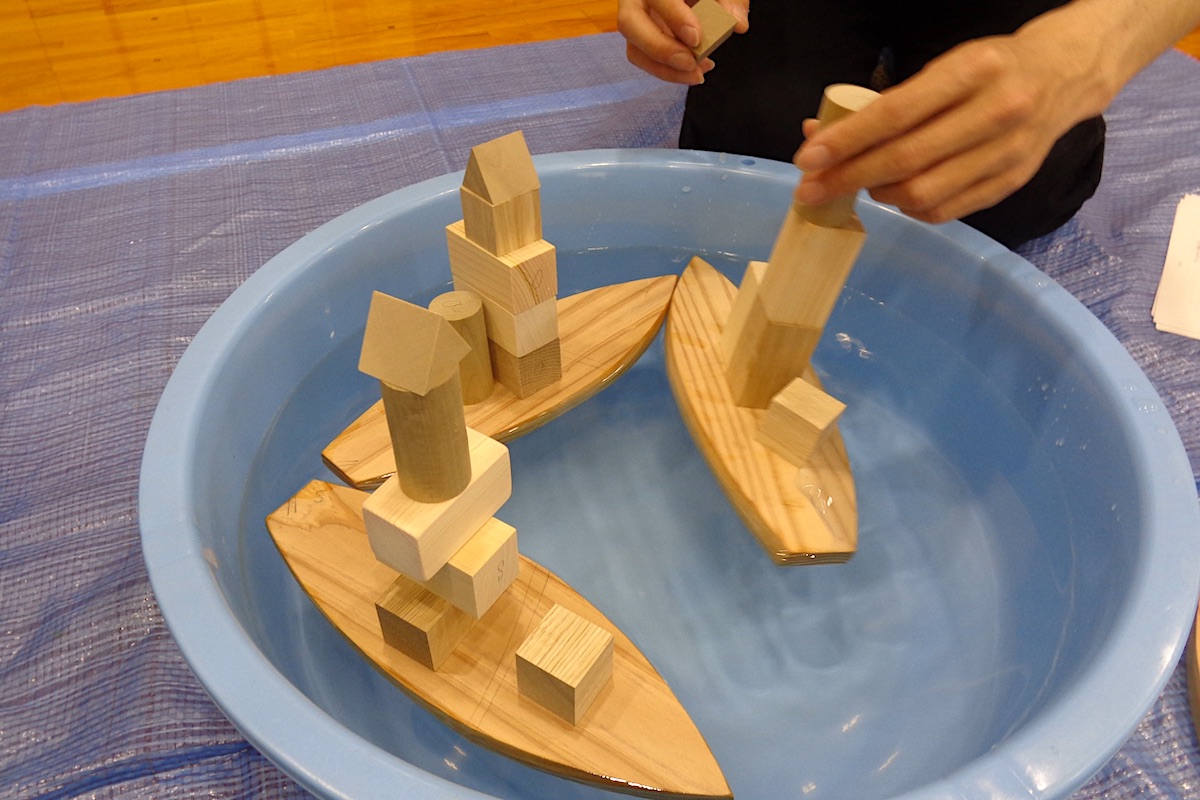 And since we were sharing the water space with others, we also had to consider how any false move or wave made would affect the balancing blocks of everyone else in our group. 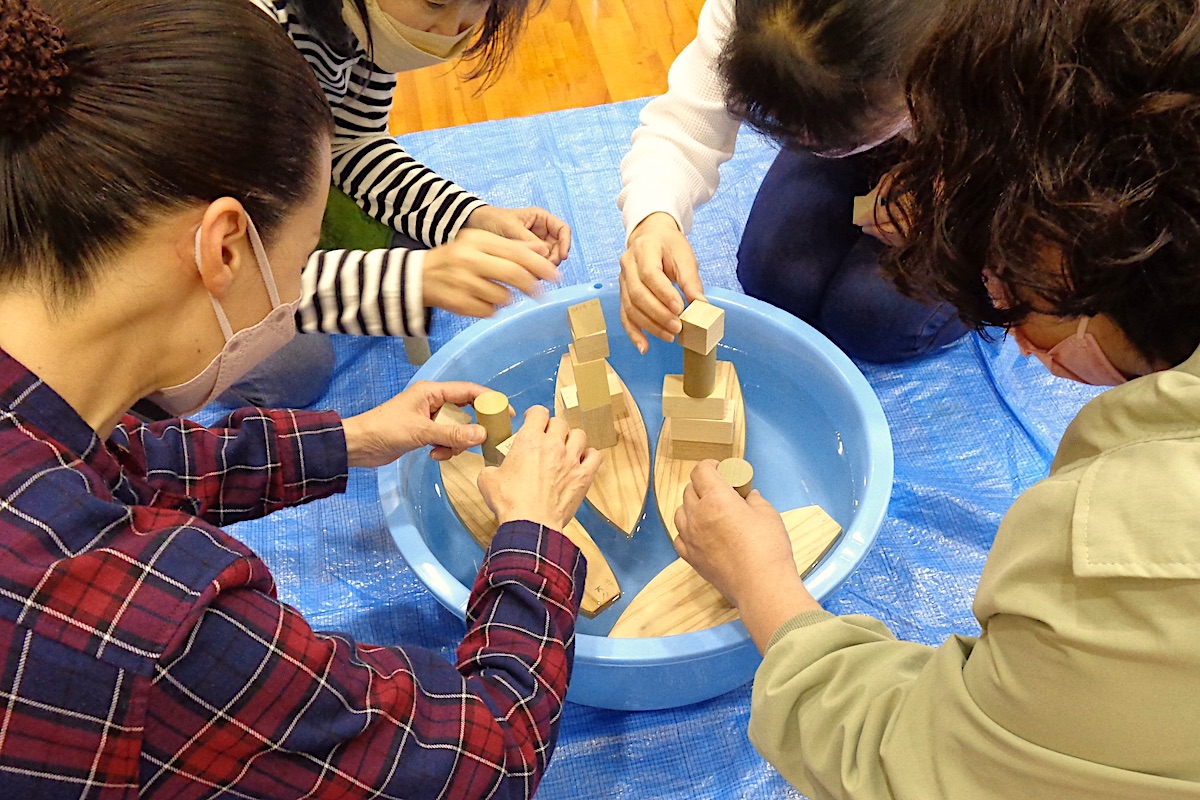 Then, after individually getting a good feel for the materials within the water, we were instructed to work together to make a single boat, such that we needed to cooperate in order make it balanced.

It was clear from the chatter and laughter that began to fill the space that the previously disjointed participants were not only working as teams, but also having fun while doing so. 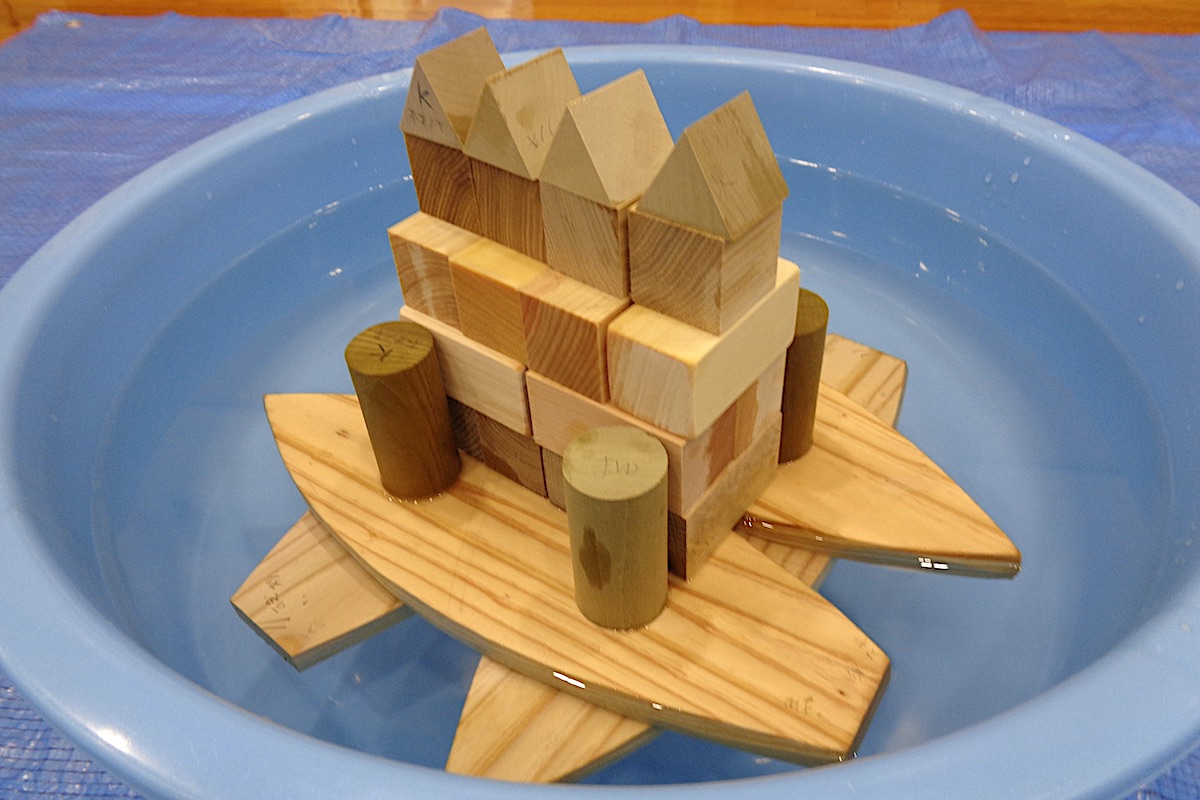 We then all went around to see one-another’s handiwork, and not only could we see a range of shared creativity, but we had directly experienced how such activities made us all feel like children again.

In the final part of the training course, we again split into groups and were tasked with creating a basic program that was based on our experiences today which could involve the local people of Miyoshi. 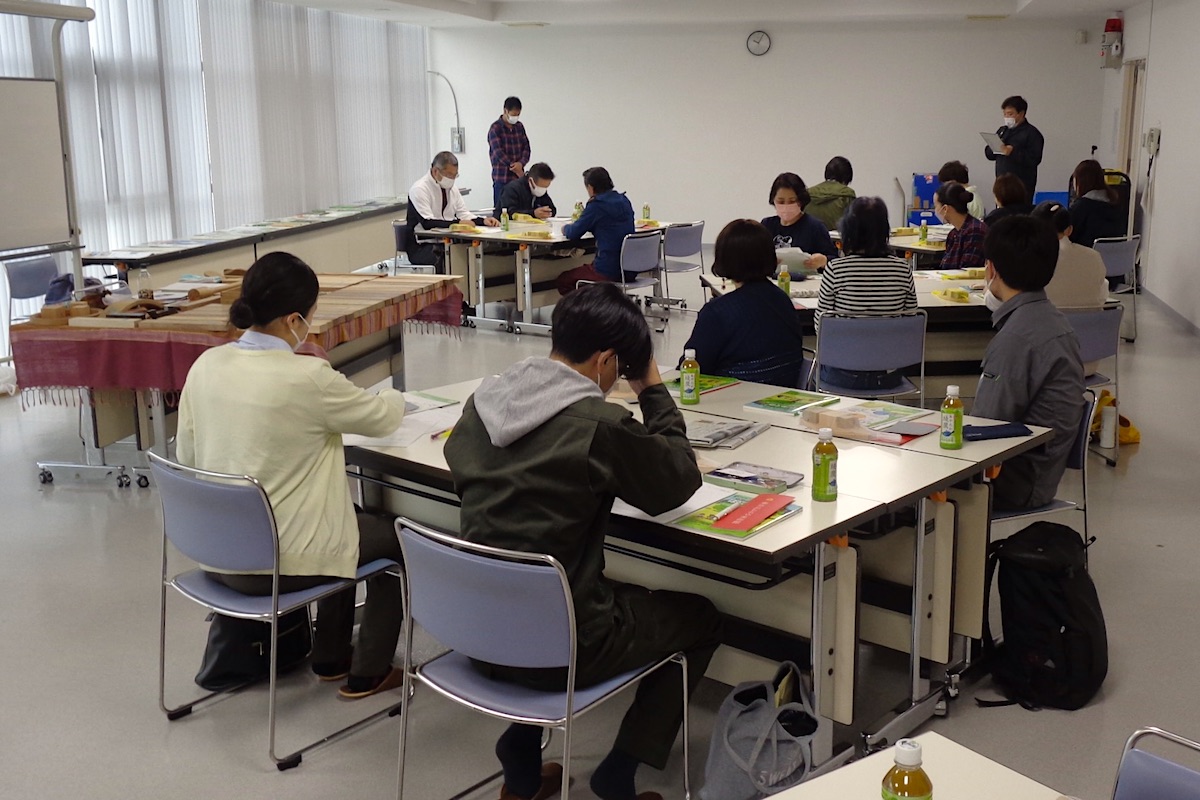 After a bit of deliberation among ourselves, each group then presented their ideas to the rest of the class, with everyone considering various issues of Miyoshi City.

One group suggested making a woodworking program which also incorporated nature-based sightseeing for tourists. Others suggested a program which could create community connection between newly established families and existing residents. And others had ideas which both targeted the children of Miyoshi as well as the elderly.

There were several great ideas shared and there were hopes by everyone that someday these programs would come to fruition.

The future of Miyoshi wood education

Feeling quite satisfied that we had experienced a course that was both mentally and physically engaging, the event concluded with everyone there being awarded certificates which qualified us all as new instructors. 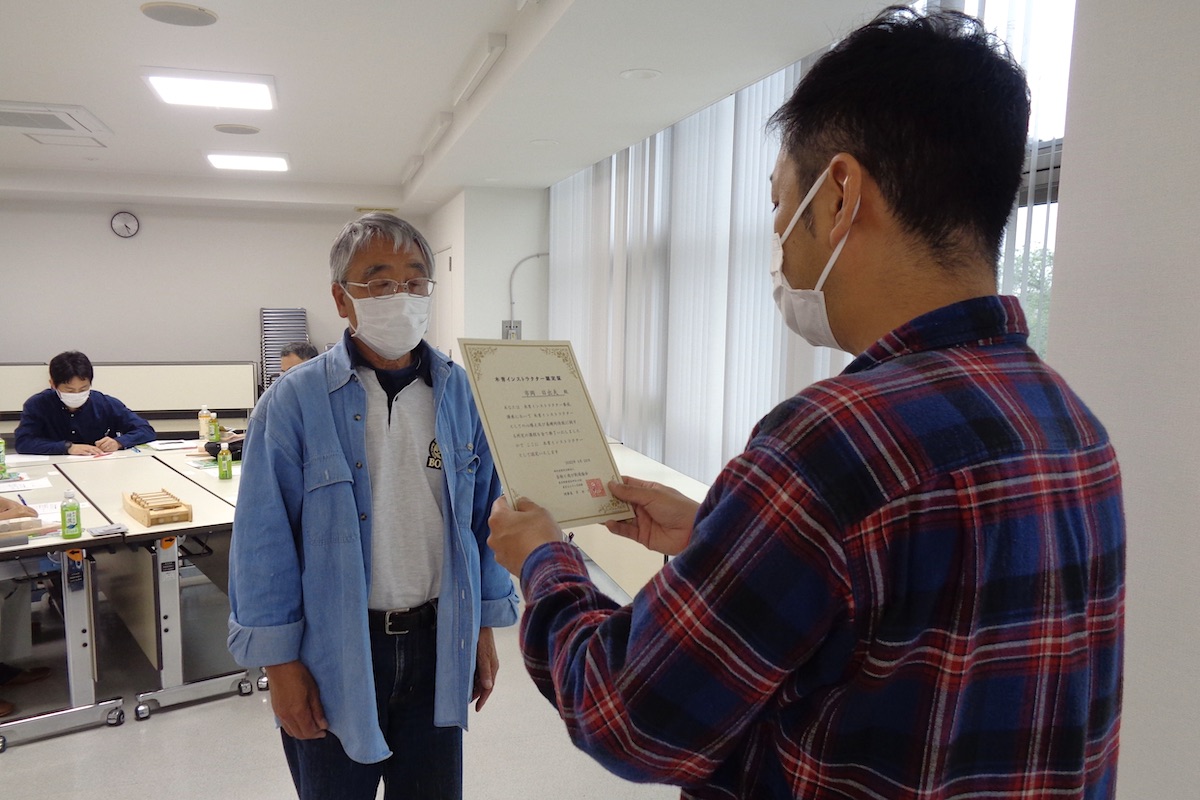 As we concluded, some of the participants gathered together to make plans on how to start implementing what we learned.

Furthermore, the local government of Miyoshi already intends to hold a “moku-iku” event at the end of May which can be enjoyed by both children and adults.

For certain, after leaving I had quite a positive feeling that “moku-iku” would take root in Miyoshi, and that the vast verdant resource of the surrounding forests would become an instrument of interaction between existing residents, newly arriving families, and future visitors.

On May 28th and 29th , 2022, Miyoshi City will be hosting a “Moku-Iku Caravan” wood-working event at the Ikeda General Gymnasium.

Free for anyone to participate and no reservations needed.