The end of the year was approaching, so on December 29th I made my way back out to the remote Iya Valley village of Kubo to check on the soba noodle making activities of the local “Kubo Mangetsukai” group.

Winter had made itself known to the residents of the Iya Valley in the preceding days, blanketing the whole valley with a layer of fresh snow. As I approached Kubo Village, I could see that the group was busy since clouds of steam and smoke erupted from the rooftops of where they worked. 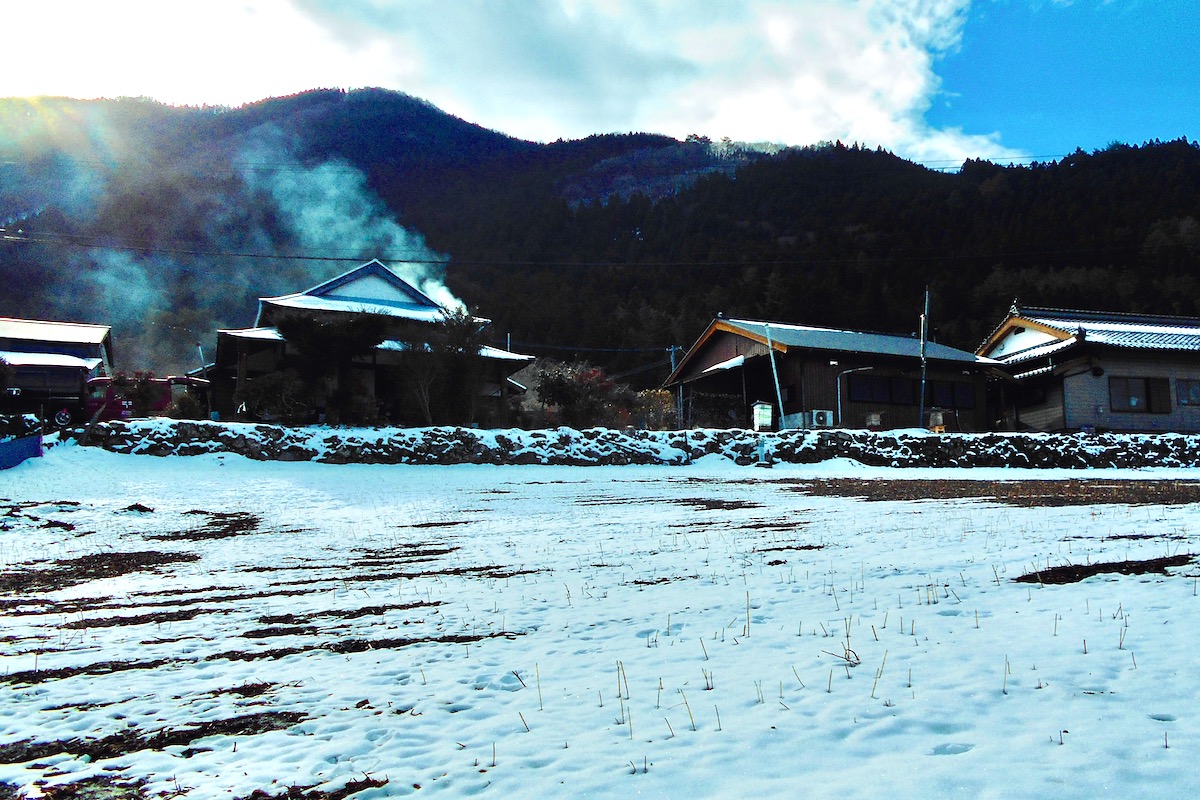 Being that Toshi-koshi soba noodles are meant to be eaten on the New Years Eve, these final few days of the year are when the whole final process must be done so that the noodles can be eaten fresh without adding any preservatives, as well as without freezing or drying the noodles.

Accordingly, a crew of fifteen or so neighbors, friends, and family of the Kubo Mangetsuka group had come together to prepare the work in three separate buildings for making, boiling, and packing the noodles.

First I headed over to the noodle making building to see how this process went. Upon opening the door I saw about seven people here all busy with the various stages for turning the buckwheat flour into actual noodles. 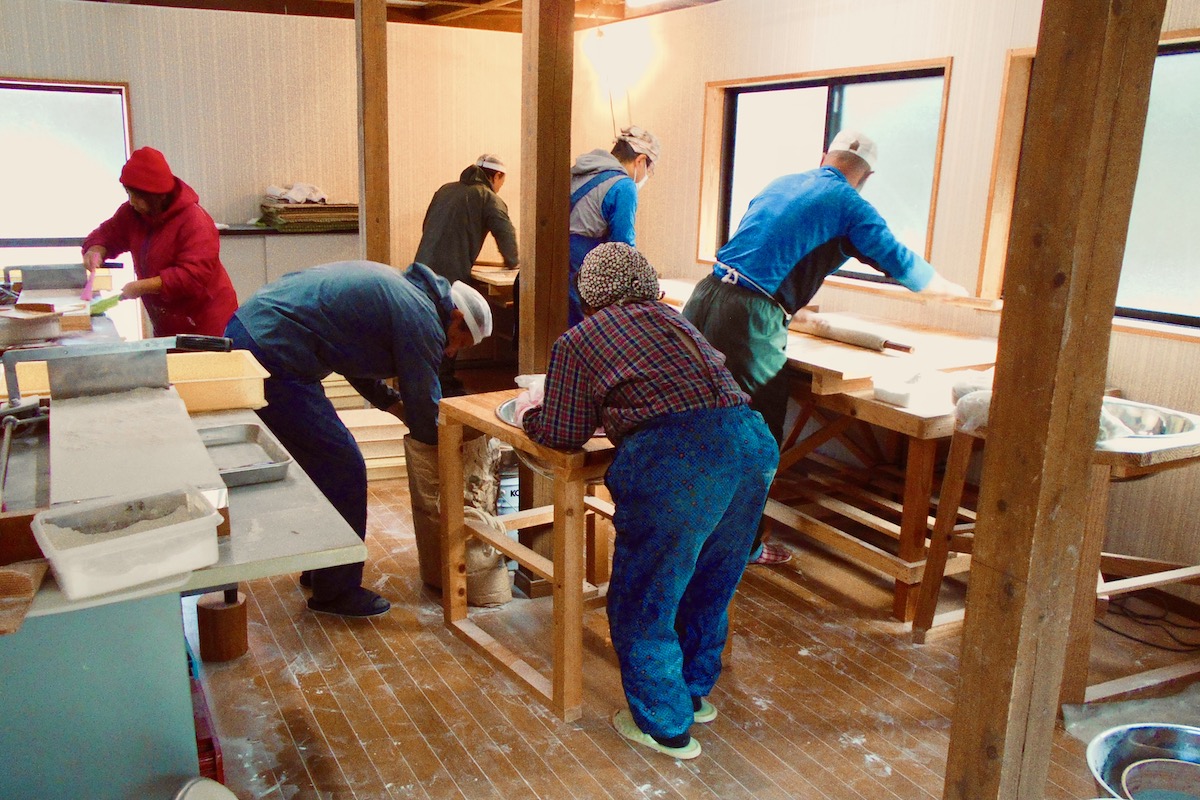 There were several men involved in this part, probably because a good deal of power was needed to continually handle the dense dough.

In first step, all of their buckwheat flour was sifted out manually. And since they had milled out over 300kg of flour from this year’s crop, just this one step would take several hours. 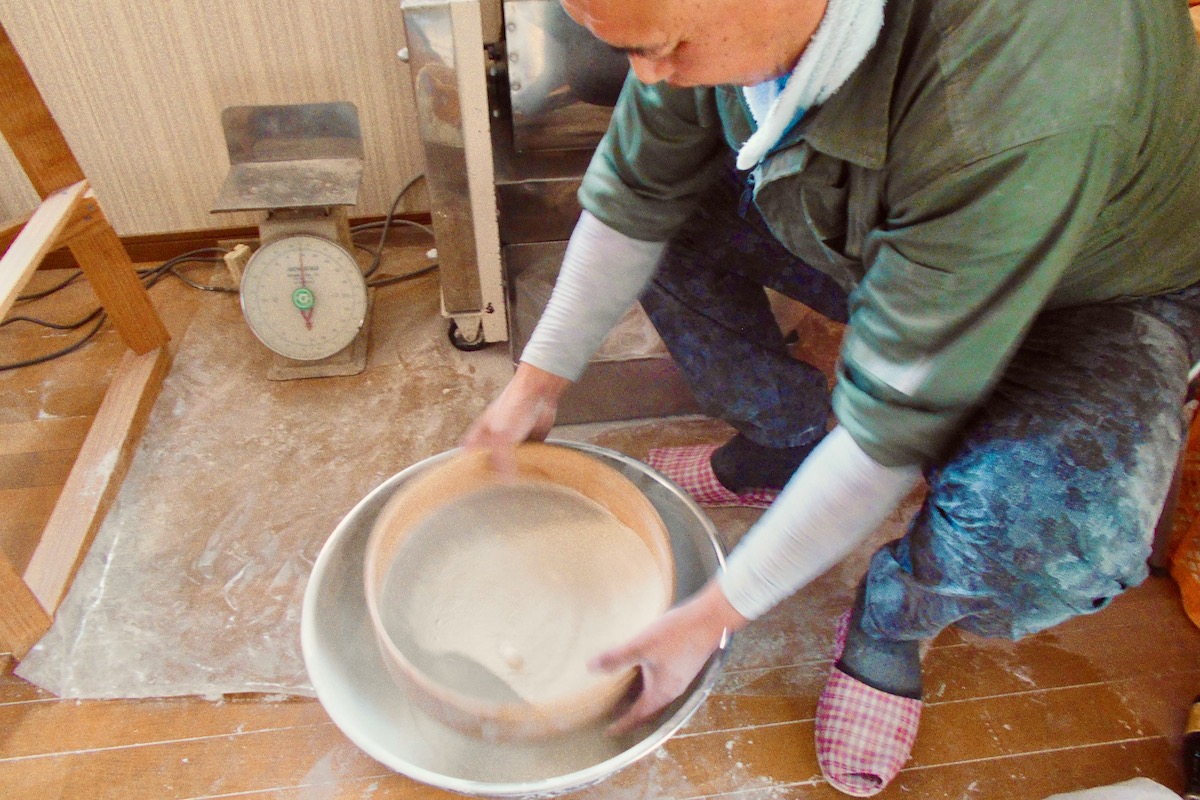 Next, water was added in order to form the flour into dough. This is the only other ingredient in Iya soba noodles, and being that there is no municipal water system in the Iya Valley, all of the water come directly from natural springs in the surrounding mountains. 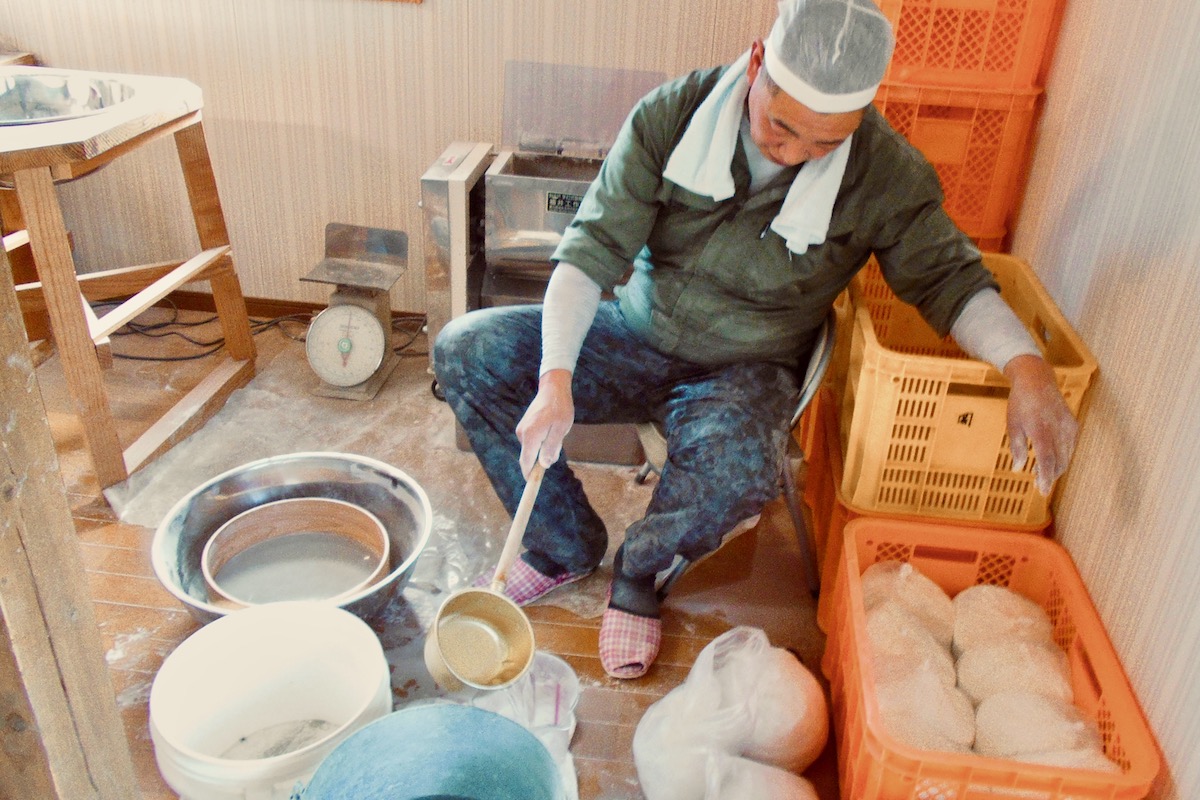 Soba: the Soul Food of Iya

The rough dough was then kneaded out repeatedly by hand until it was smooth and firm. And though this step requires a good deal of muscle, the elderly ladies of the Iya Valley can often outperform the younger generations of men. Indeed, making soba is in their blood. 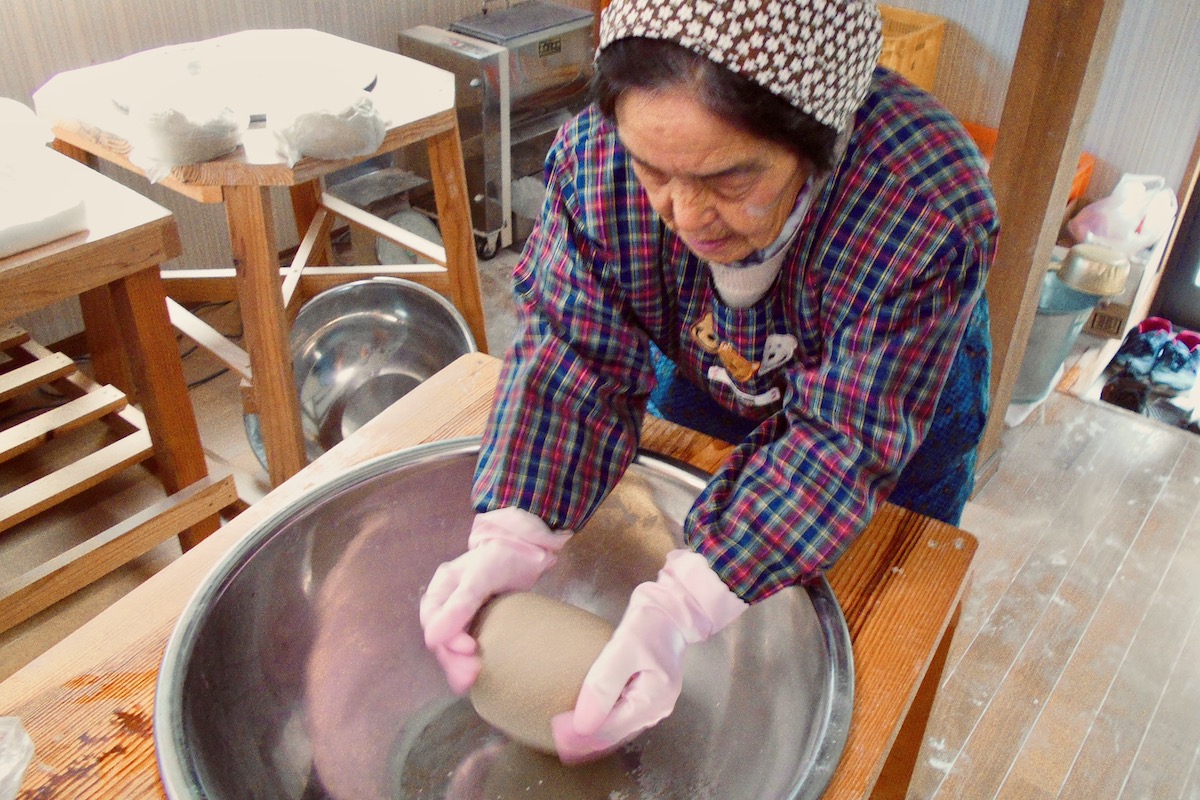 The dough was then stretched out by hand into circles and then rolled flat with long wooden pins. Three men operated this station, each diligently rolling and forming the dough in order to get a smooth, even thickness.

As they slapped and shaped the dense dough thinner and thinner, I could see their concentration as they used their expert skills to maintain even pressure to form the beautiful circles. 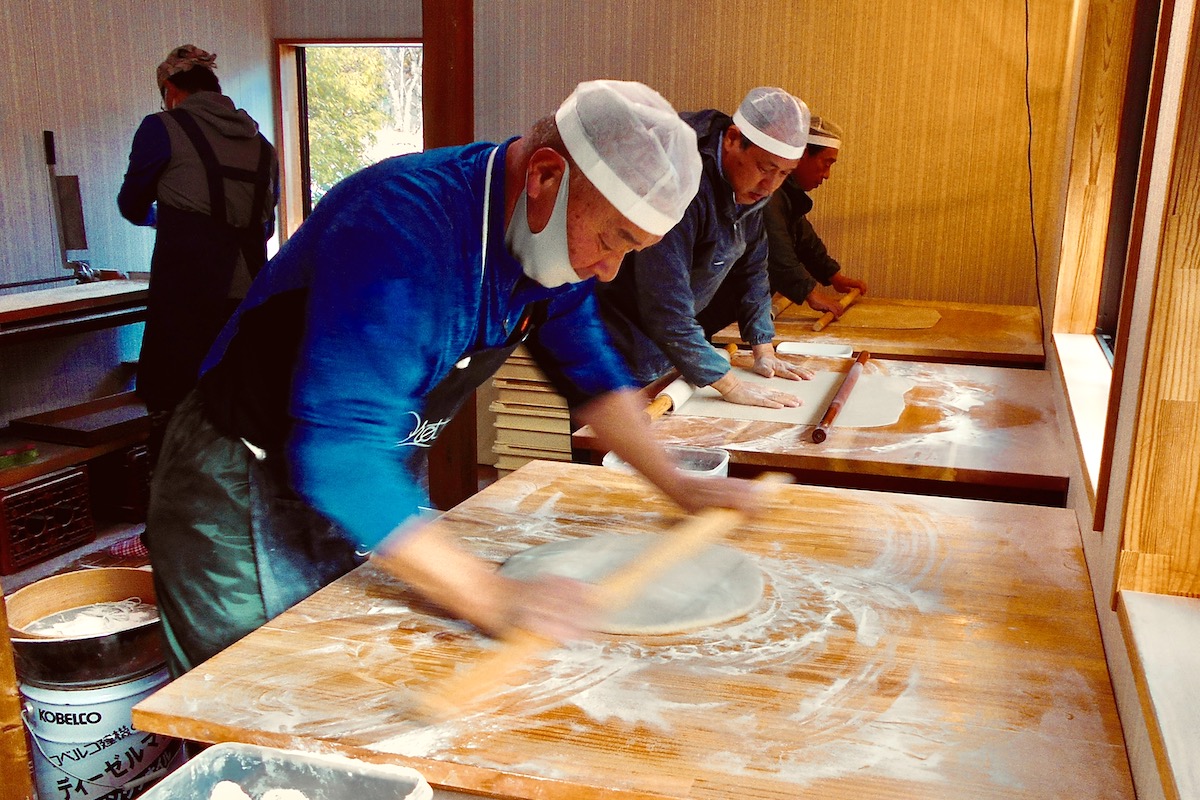 Once achieving a thickness of just a few millimeters, they passed the folded sheets of dough over to the people in charge of cutting the noodles.

The Sounds of Soba

Using a special knife blade that was fixed to a sliding hinge, each noodle was cut one by one with the same hand-chopping motion. 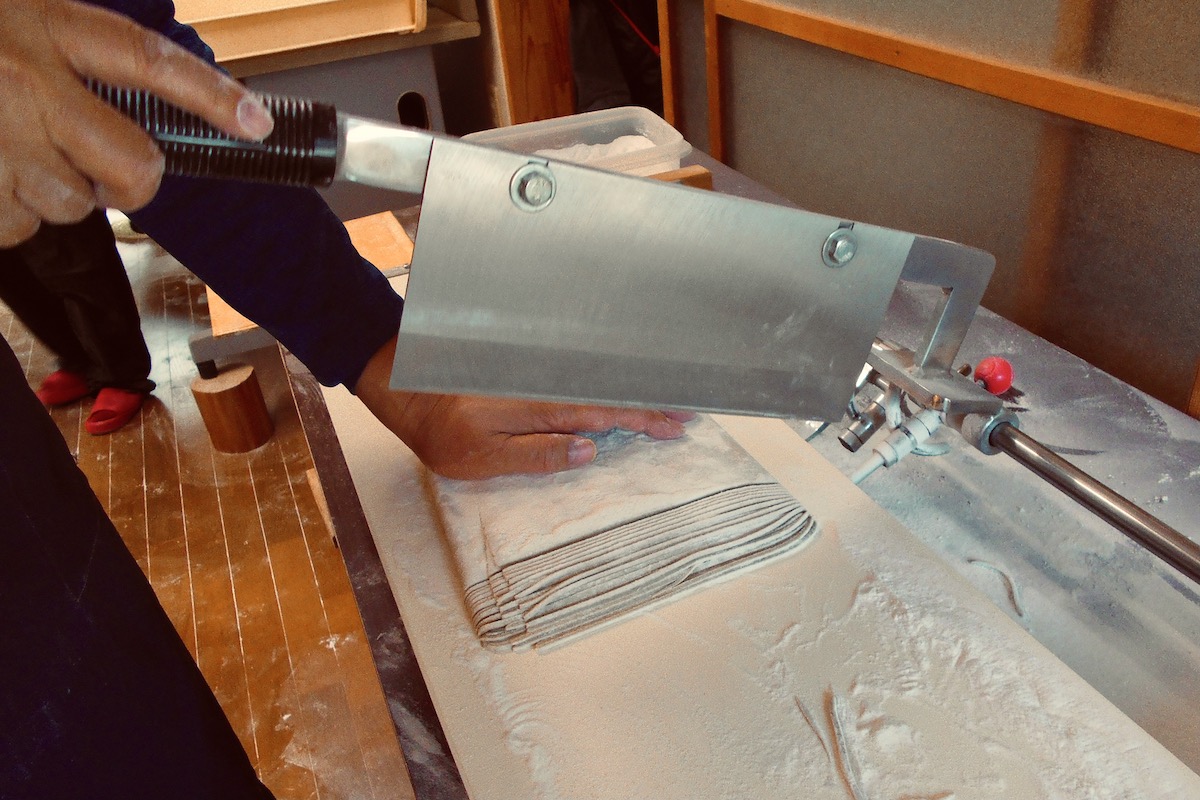 Thousands of noodles would be made like this today. And as they were methodically cut, the thumping sound of the knife rhythmically pounding down echoed through the small workshop, giving a background cadence for them all to work with. 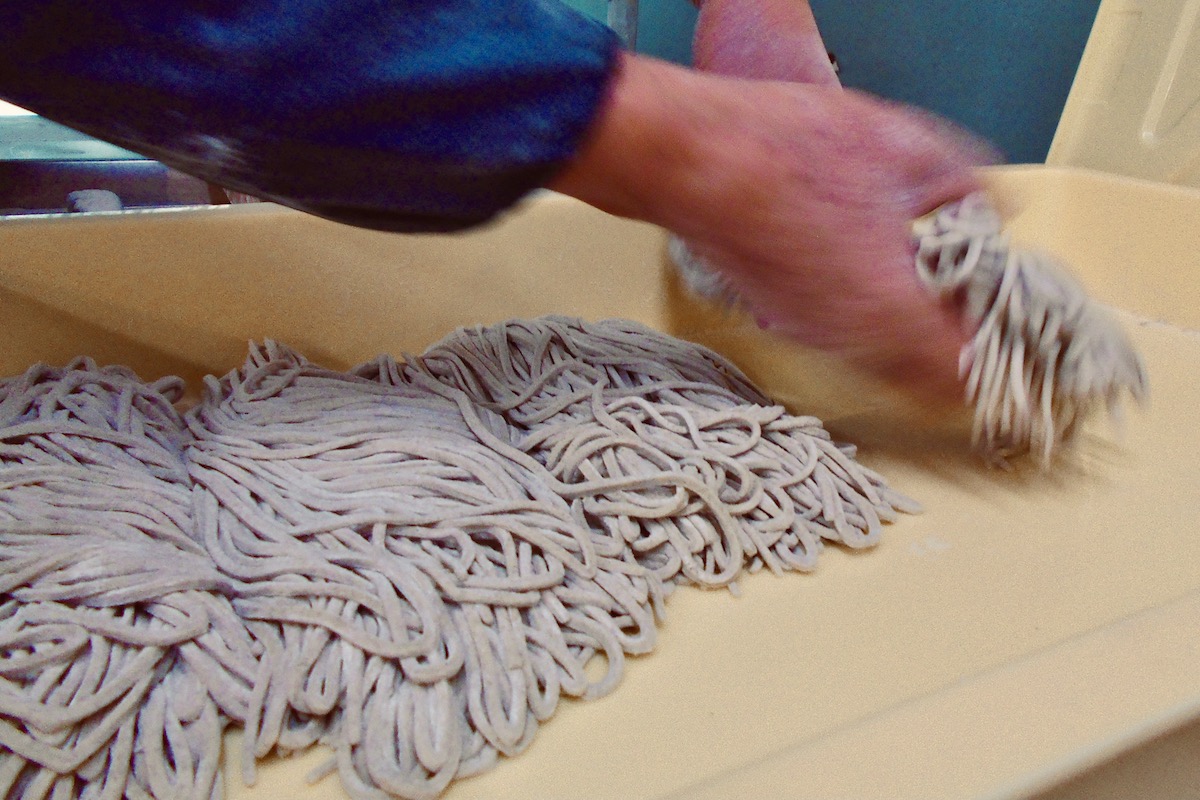 The beautiful hand-made noodles were now ready to be cooked, and in Part 3 I will explain the group’s final steps for preparing their Toshi-koshi soba noodles.

And to enjoy some Iya Soba the next time you visit, here are a few places which specialize in this local dish anytime of year: