With continuous breathtaking views as it weaves along the ridge-line trail, the Tsurugi – Miune Traverse is one of the most majestic hiking routes in not just Miyoshi City, but in all of Shikoku. This 3 day (2 night) hike covers a total of about 25km and utilizes the mountaintop huts, with access to/from the trailheads by local bus.

With its panoramic eastward facing position at a height of 1930 meters, the sunrise from the Tsurugi Chojo Hutte was spectacular. The wind was quite strong this morning, which can be common on Mt Tsurugi, but the handful of other guests from the night before were all out to take in the wonderful views. 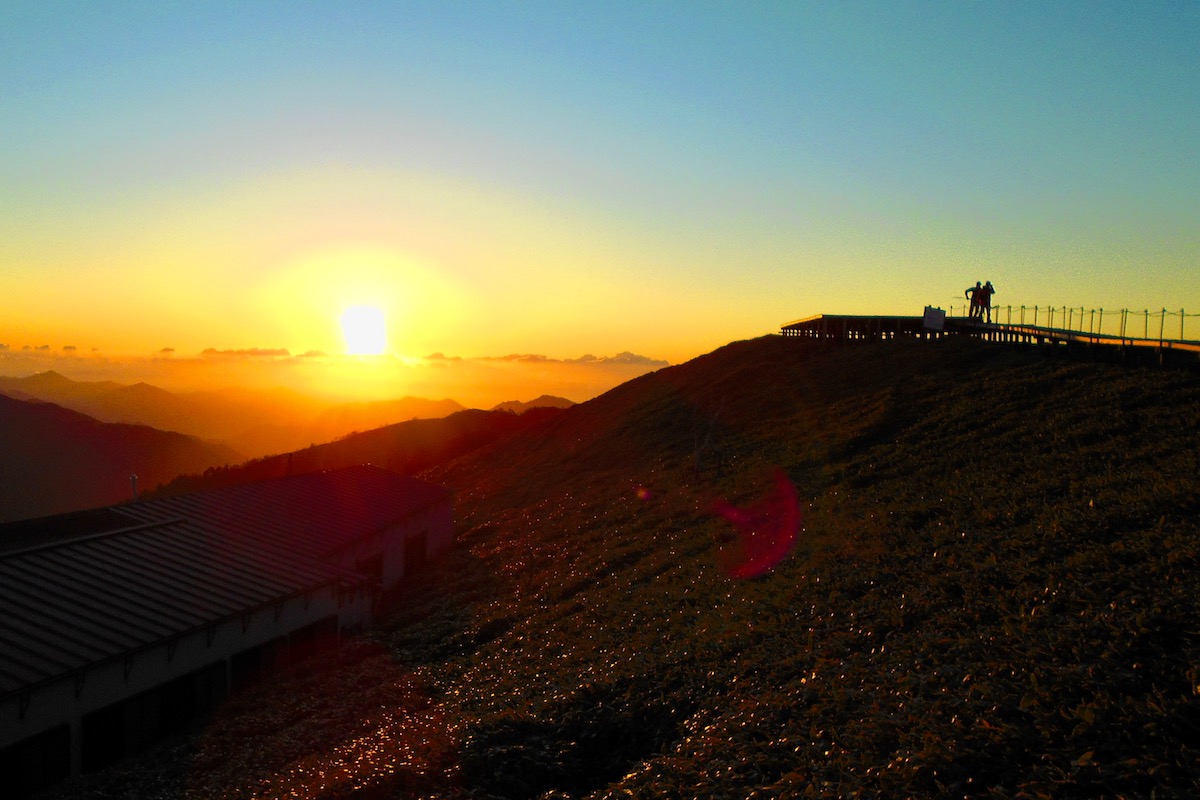 Overnight the temperature got as low as 6 degrees, which may seem cold for when I visited in early October, but at this elevation it was normal. I was told that it isn’t unusual for it to go below zero during the night at this time of year. So whenever visiting, do be sure to bring warm enough clothes.

Breakfast back at the hut was another meal that couldn’t be beat, offering up a traditional Japanese set of soup, rice, vegetables, and an egg. I also got a packed lunch from the hut to bring with me which I ordered the night before. 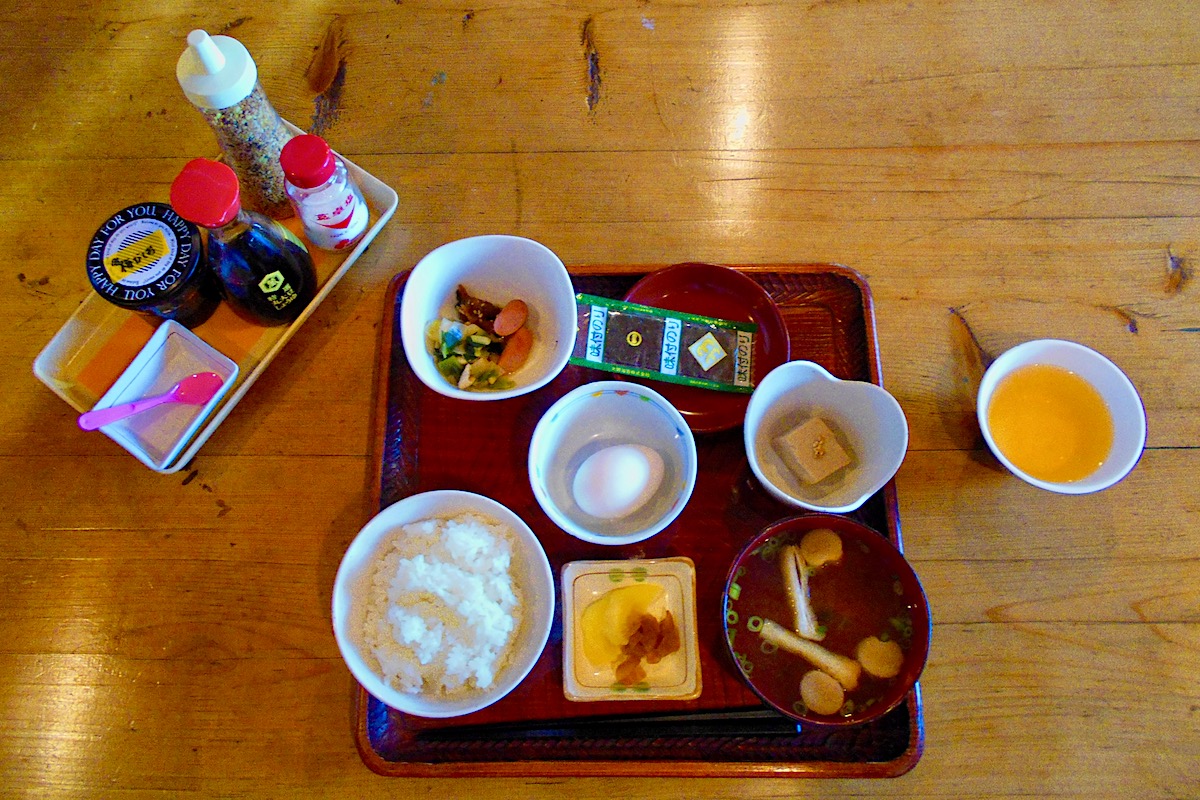 It was going to be a long day of hiking, about 17 kilometers total, but with lots of ups and downs as the route followed along the ridge the whole way, and along with some breaks to take in the scenery, it would take a bit more than 8 hours. So after refilling all my water containers at the hut, I set off a bit after 7:00am.

I first passed again over the summit of Mt Tsurugi and then headed out from there for the picturesque neighboring mountain of Mt Jirogyu, which is a traditional Japanese name for a family’s second son (Mt Tsurugi also has the nickname of “Tarogyu”, which is the traditional name for the first son). 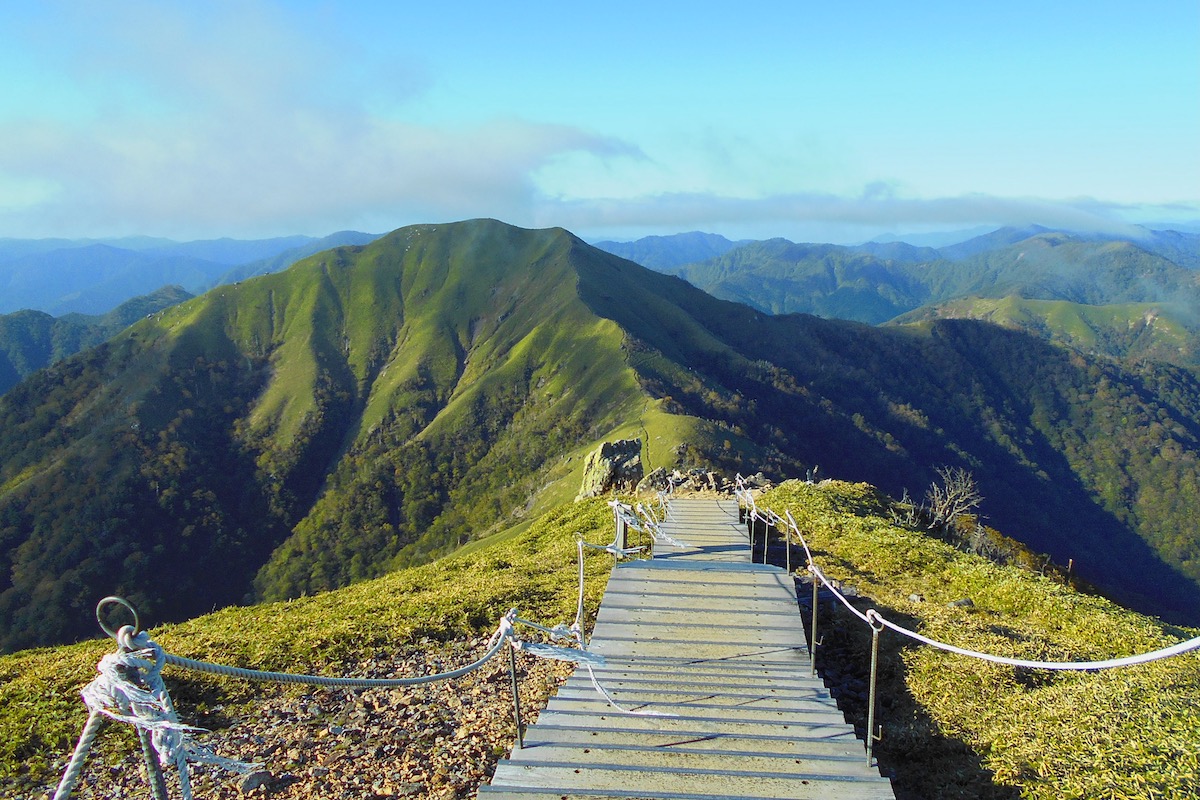 Mt Jirogyu stands triumphantly right next to Mt Tsurugi and it was easy to see the trail going right up to its summit as it crossed over the ridge-line pass between the two mountains.

Far off beyond to the right, a seemingly epic distance away, was the towering top of Mt Miune, the end goal for the day. 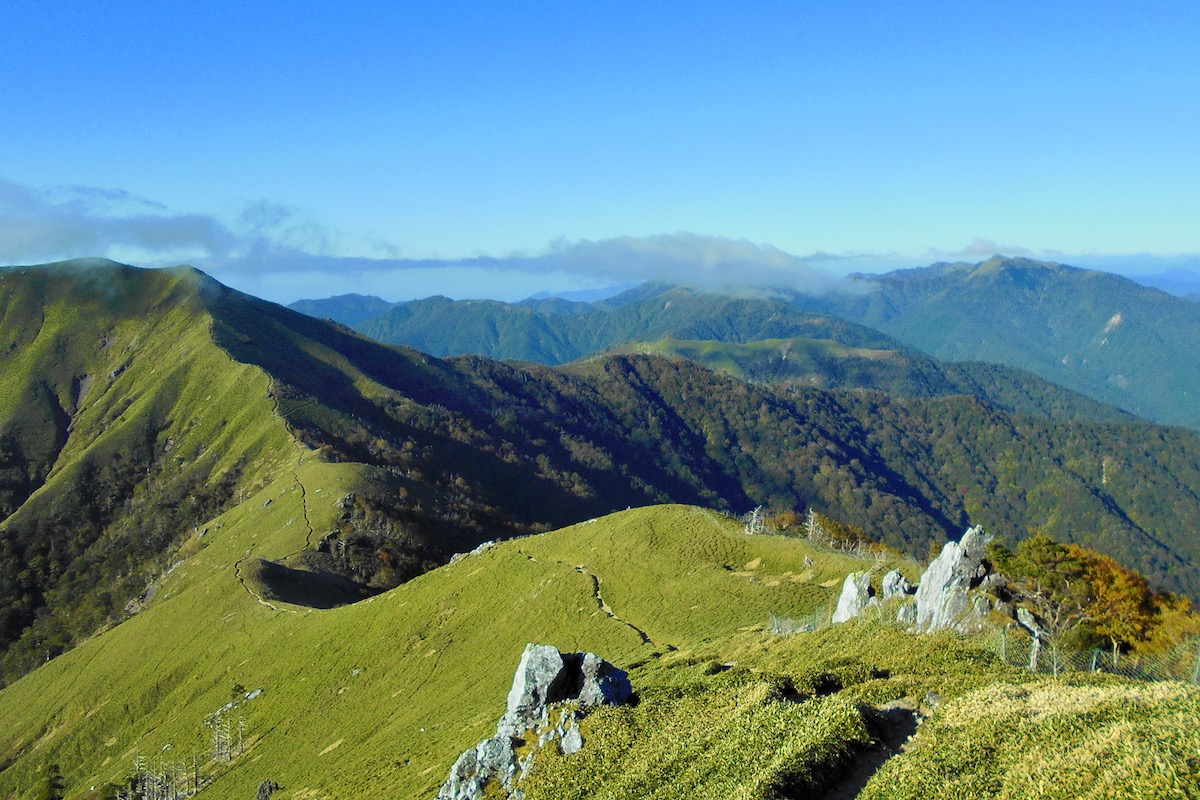 The trail to Jirogyu was easy enough to follow, but it was steep at times both going down Mt Tsurugi and equally steep going up the side of Mt Jiryogu to its 1930 meter summit. It took about an hour to go from summit to summit, and looking back at Mt Tsurugi and neighboring Mt Ichinomori was awesome. 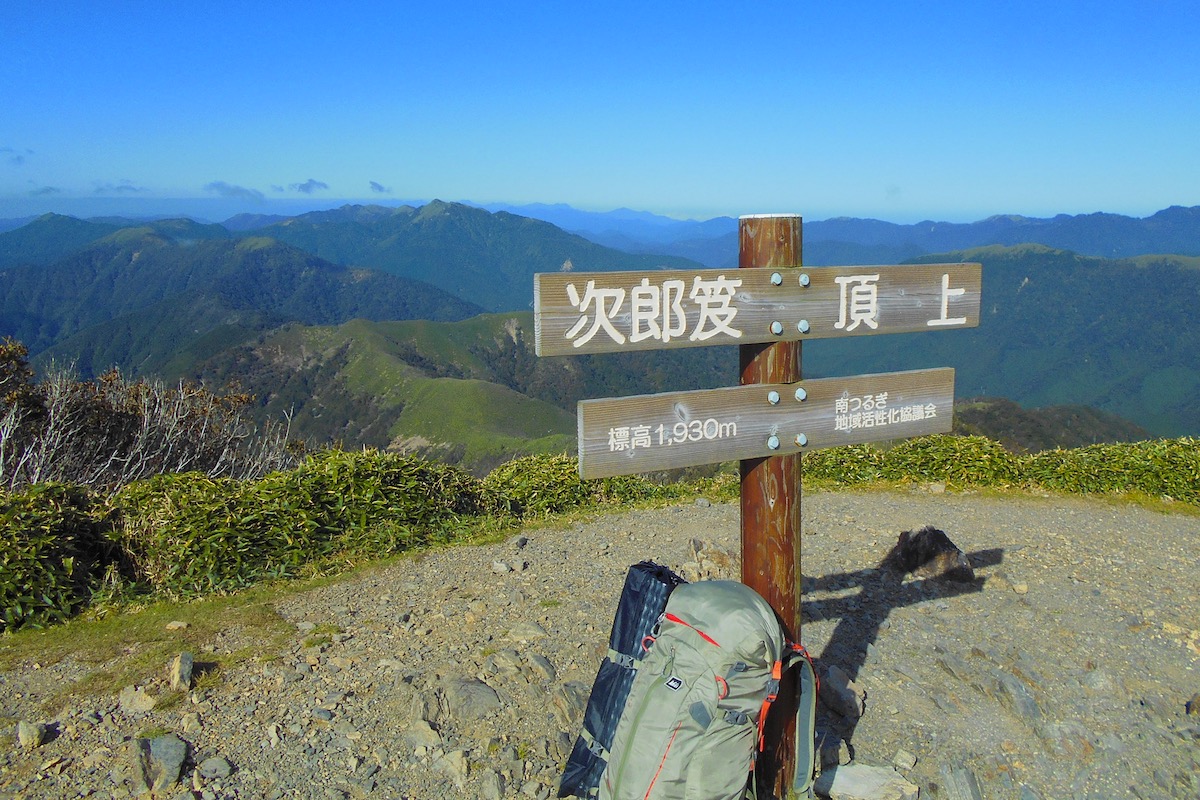 Heading out further from Jirogyu the trail simply follows along the grassy ridge, with views extending out in every direction as you pass through a collection of skeleton-like dead trees. 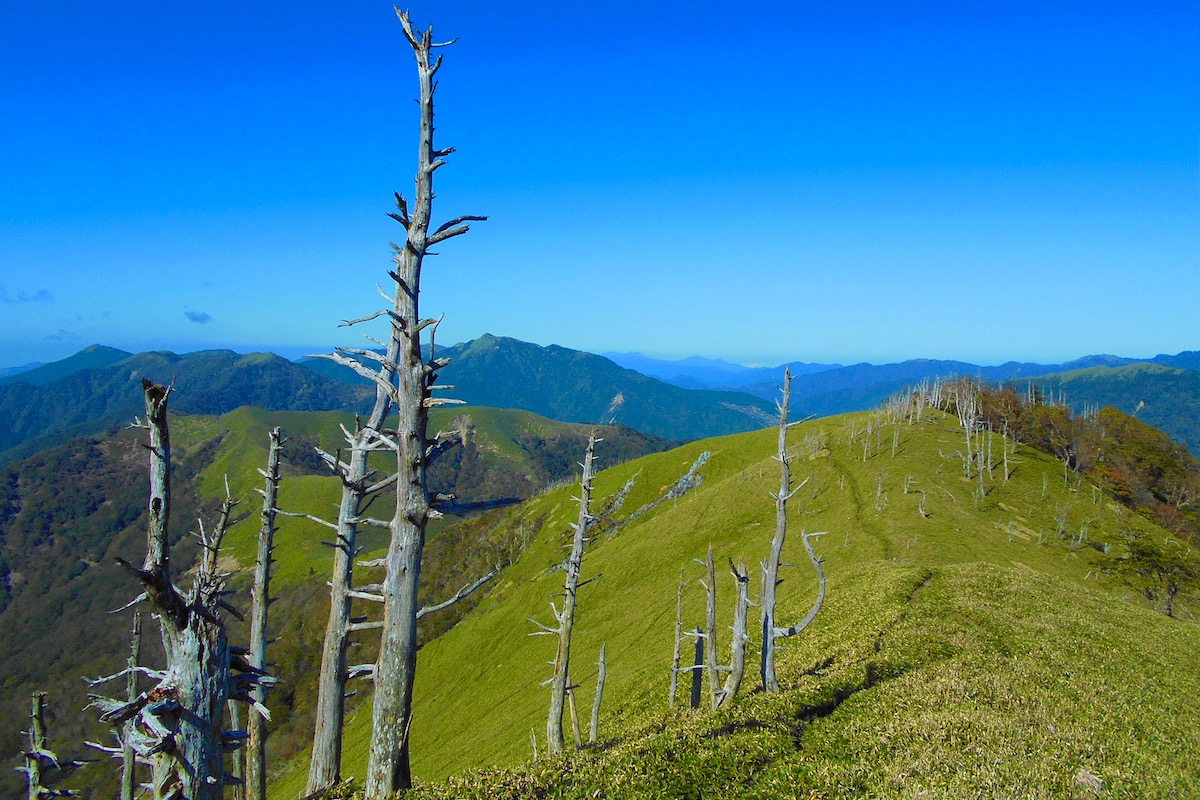 Over the course of the next hour the trail went slowly down and then back up again to the summit of Mt Maruishi at 1683 meters. Looking back from here to Jiryogu and Tsurugi was wonderful. 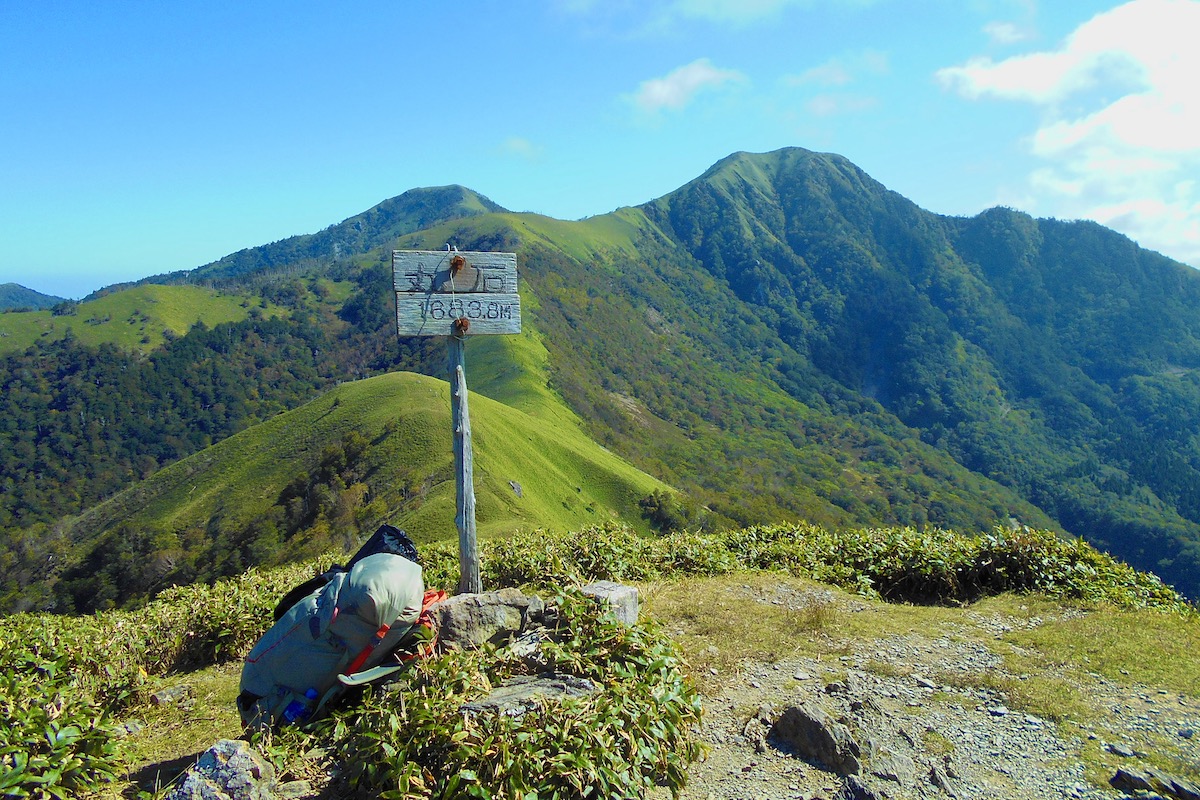 I sat for a bit as I took in the view to have some snacks, which included an energy bar as well as some my own home-made “trail mix” of raisins, nuts, and chocolate. 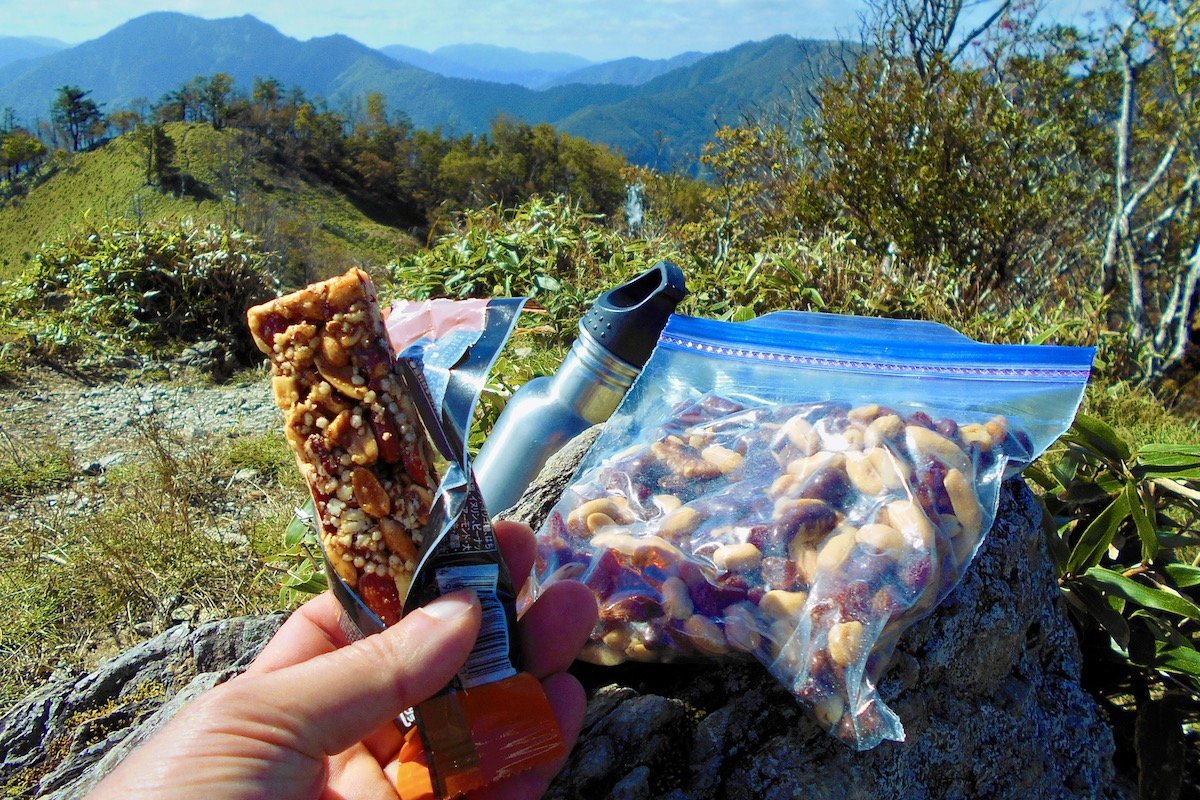 From the top of Maruishi the trail enters a bit of forest as it gradually goes down to the small Maruishi Shelter Hut 20 minutes away, which is OK to sleep in if you wish, but do realize that there is no staff, no electric, no toilet, and no water anywhere nearby. 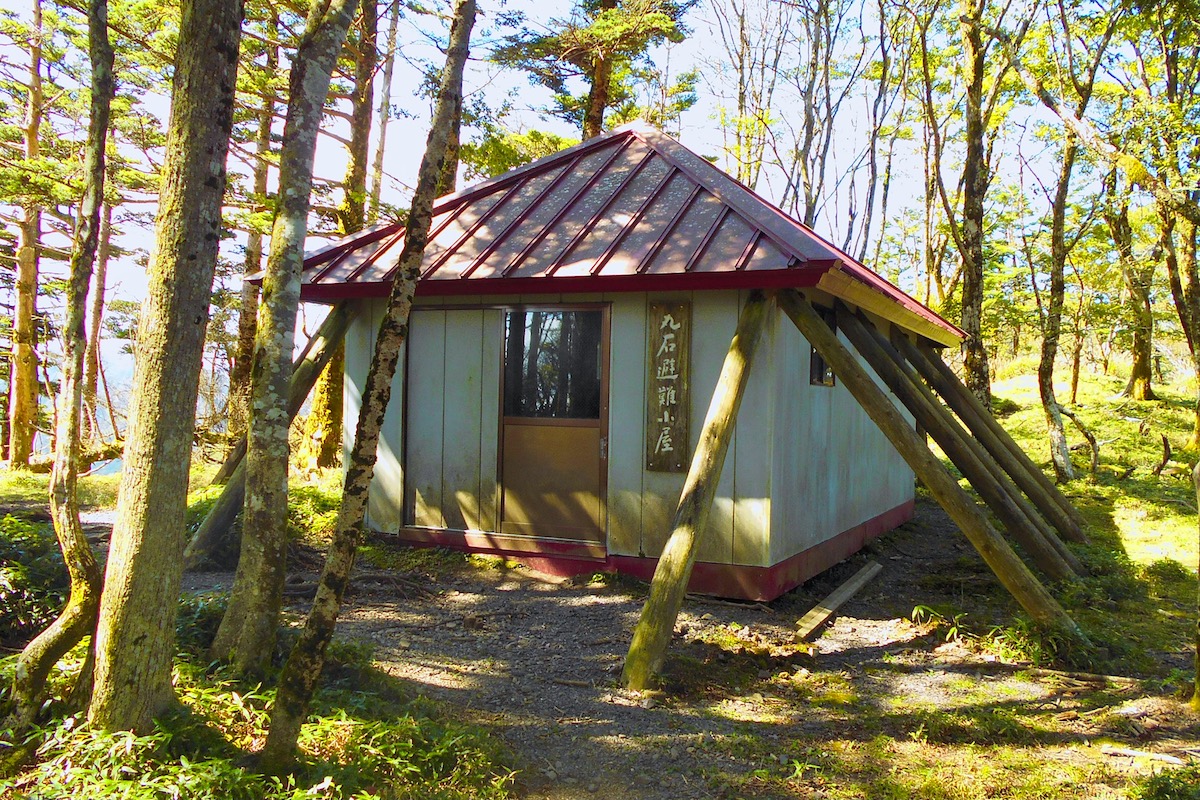 Soon after the Maruishi Hut a side trail goes off to the right down the mountain to the Oku-Iya Niju Kazurabashi (Double Vine Bridges) about 1.5 hours from here (or 2.5 hours coming up), and if you are having any trouble with the hike thus far, understand that this is the last exit point for several hours until reaching Mt Miune to get back to civilization.

The ridge trail meanders further through the forest for the next hour or so and then begins to gain elevation as you approach Mt Konose, with the final 20 minutes to the summit being a rather steep scramble up through some rocky areas. 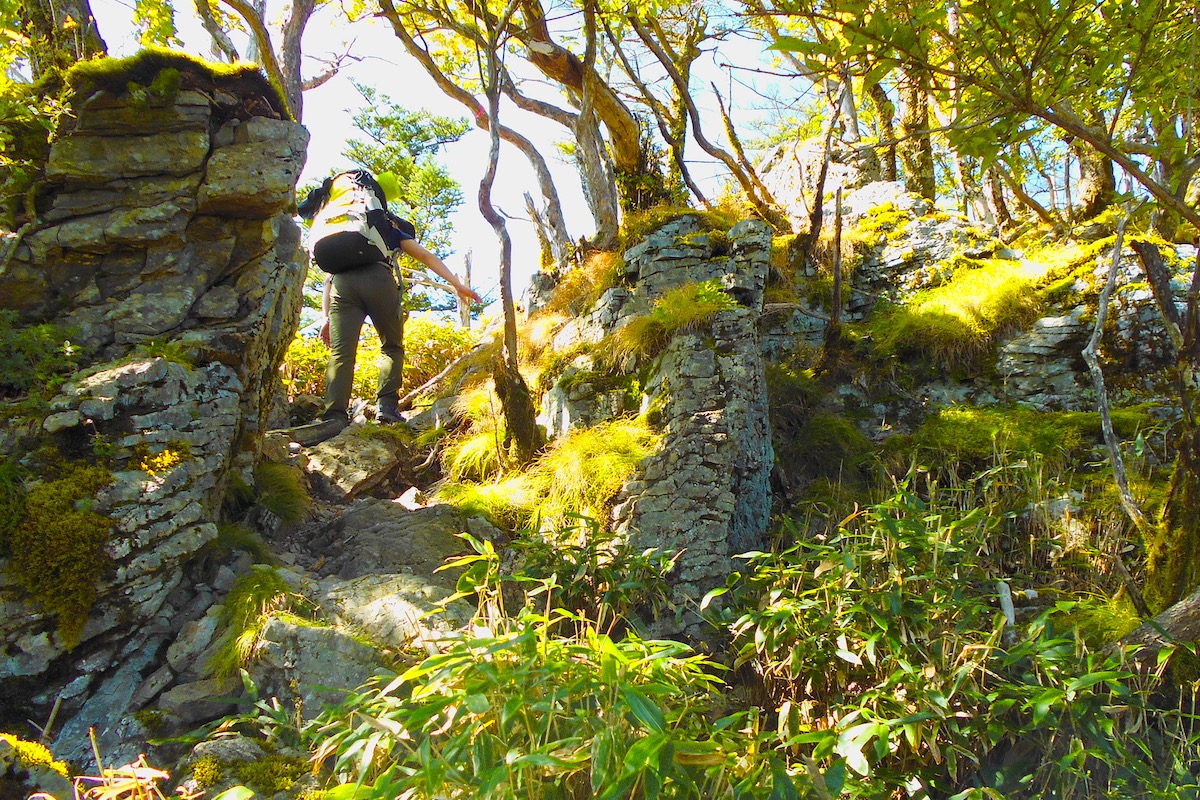 (It is not advisable to attempt this in heavy rain, so either stay at the Maruishi Hut if the weather is bad or evacuate off the mountain).

Once at the 1741m top of Mt Konose the forest dissolves and the far reaching views in every direction begin again, with Mt Jirogyu and Mt Tsurugi now pretty far back in the distance. It has only been about 3 and a half hours since beginning and they seem quite far. The trail then continues with some ups and downs for another 40 to 50 minutes through some trees, and you will pass a sign stating you have come 8km from Mt Tsurugi and still another 9km to go to Mt Miune.

About a half kilometer after this (so almost exactly halfway) the forest opens up once again where an epic view of the lovely ridge ahead awaits. 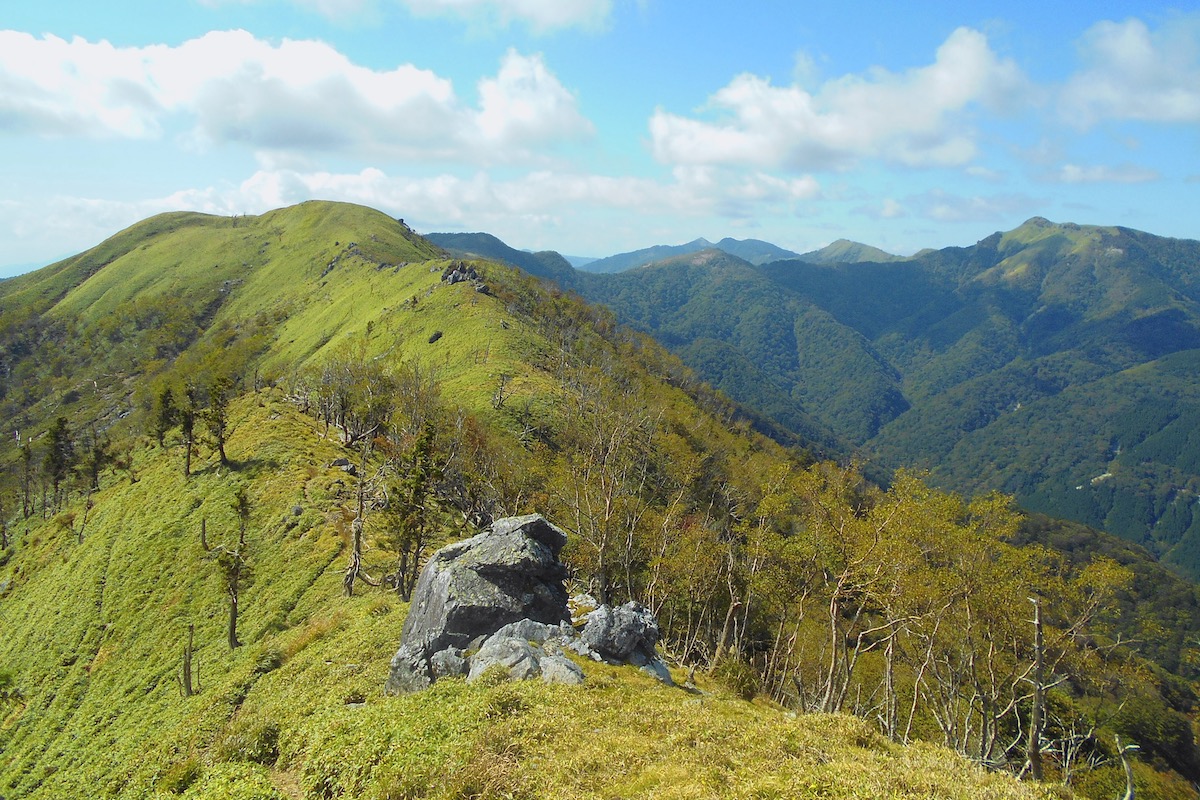 It was now close to mid-day and I was pretty hungry, so I took off my bag and had lunch.

In Part 4 of this 6 part article I will detail the rest of the hike along the ridge to Mt Miune.

For more information about access and hiking in the Iya Valley in English, including detailed trail maps, check the Hiking Portal page on the IyaTime website.

For information about the Tsurugisan Chojo Hut, their website is here: