For those who have camped elsewhere in Japan, the campground at the Oku-Iya Double Vine Bridges is a welcomed escape from the norm. As you may know, Japanese campgrounds are usually a bit rigidly structured and often either overbuilt or under-whelmingly situated, making the “back-to-nature” feeling rather absent.

But this is not so here, where you are fully encompassed by pristine forest, far out of sight or earshot of any road, yet still with enough facilities to make it a comfortable experience. 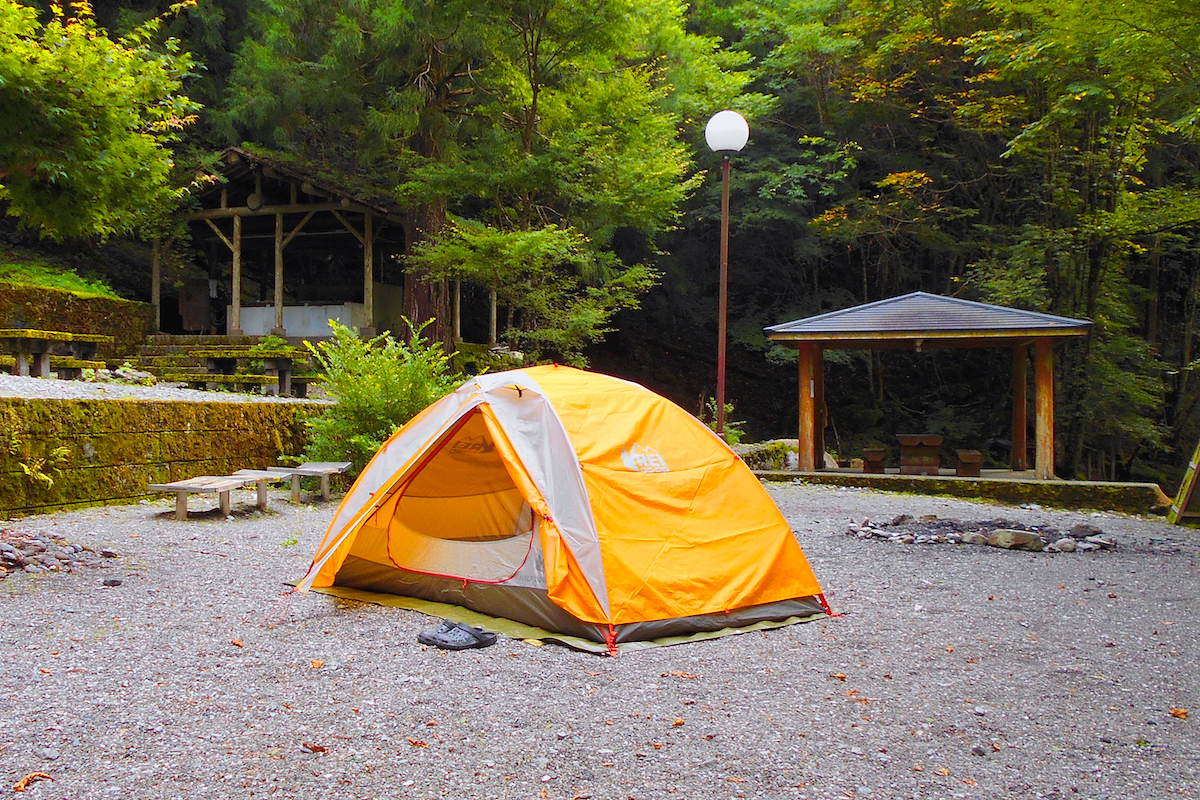 The camping area has upper and lower levels, with easily enough space for about 10 or 15 tents. There are no defined tent sites, so you are free to choose anywhere you’d like. If coming on a weekend or holiday there may be others also camping, but I visited mid-week and was the only one there that night.

After setting my tent and arranging some gear, I explored the area a bit more. The vine bridges are particularly awesome to cross again and again, and stepping into the river was absolutely refreshing. 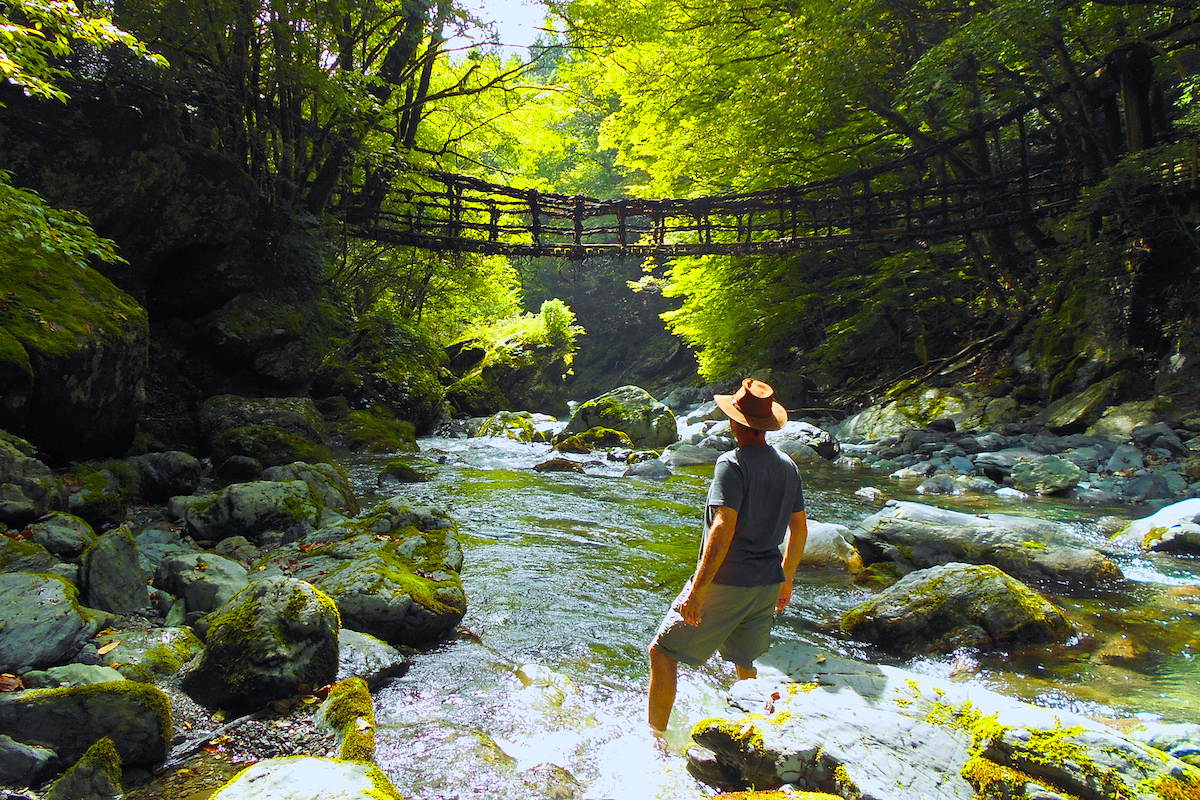 At the far end of the campground a nature trail leads off and follows the river deeper into the valley. This easygoing trail is fairly level and a pleasure to walk upon, but there are a few wooden ramps which can be rather slippery, so it’s better to wear shoes instead of sandals. 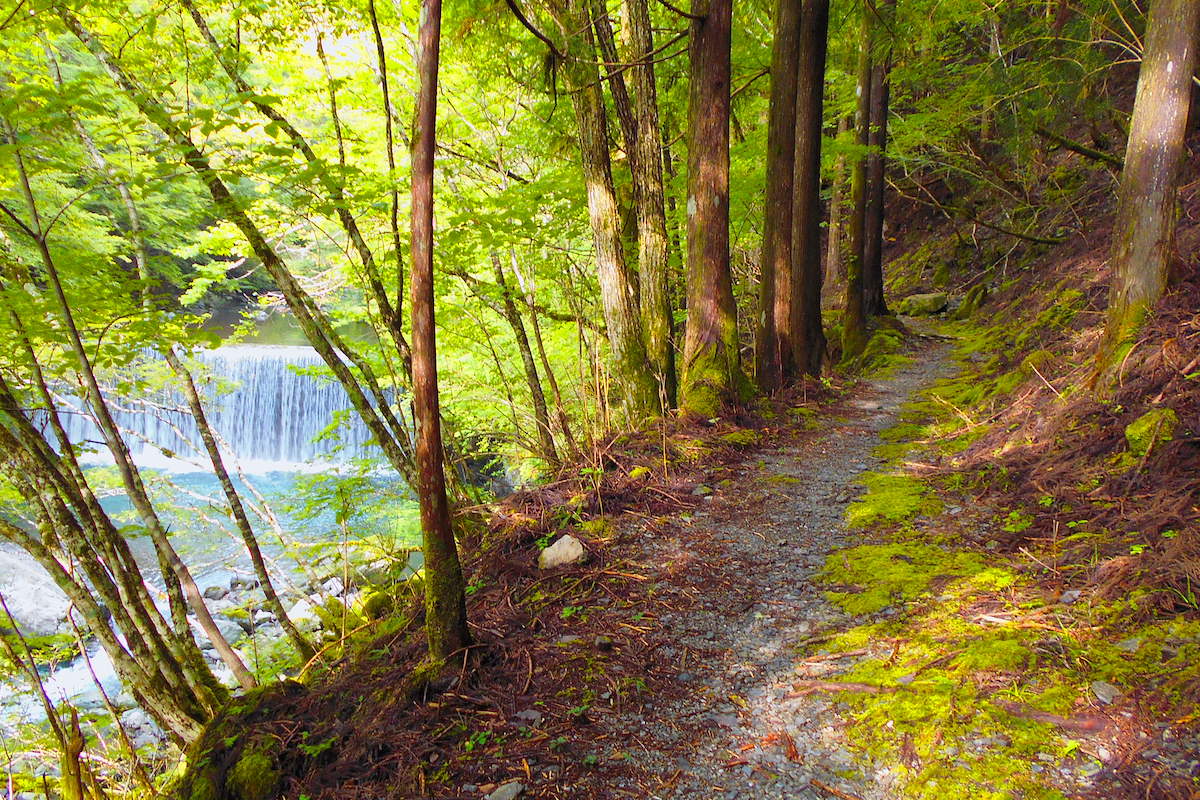 With the river babbling and birds chirping, the trail goes for about 20 minutes to a small viewpoint where an erosion dam was built. But even if you just go half-way, the natural surroundings are an absorbing way to experience the Japanese concept of shinrin-yoku (“forest bathing”). 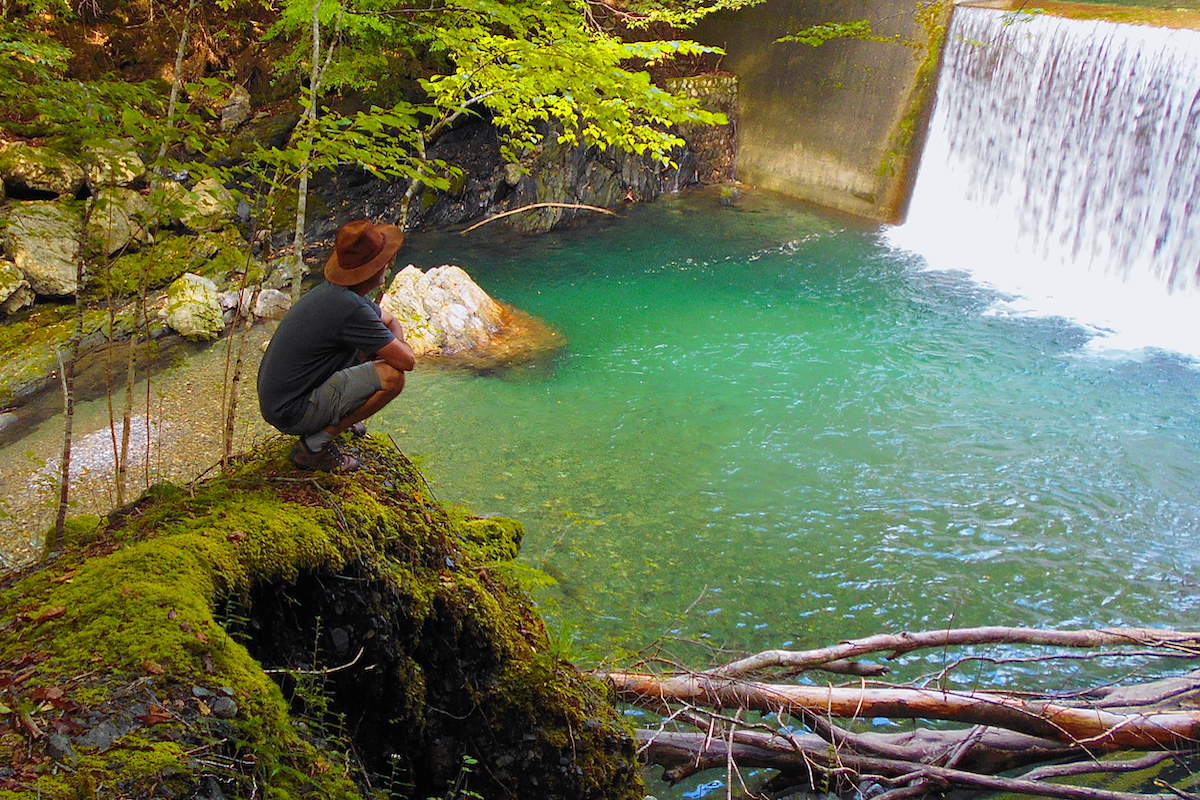 Back at the campground, I began preparing for dinner. First I built a campfire, and if also wishing to do so, I suggest bringing your own dry wood, since any scavenged wood would be rather damp and Japanese people feel it’s better to leave the surrounding forest the way it is.

But carrying in some wood wasn’t too tough since I didn’t need to trek in very far to the campground (and the 5 minute walk from the entrance was downhill the whole way), so aside from a stack of wood, I also brought a small cooler of drinks and a range of ingredients for a fulfilling set of meals.

Tonight I decided to enjoy the tastes of the Iya Valley, and made a skillet full of sliced venison, Iya potatoes, and various vegetables. I also brought some home-made bread that I baked the night before. 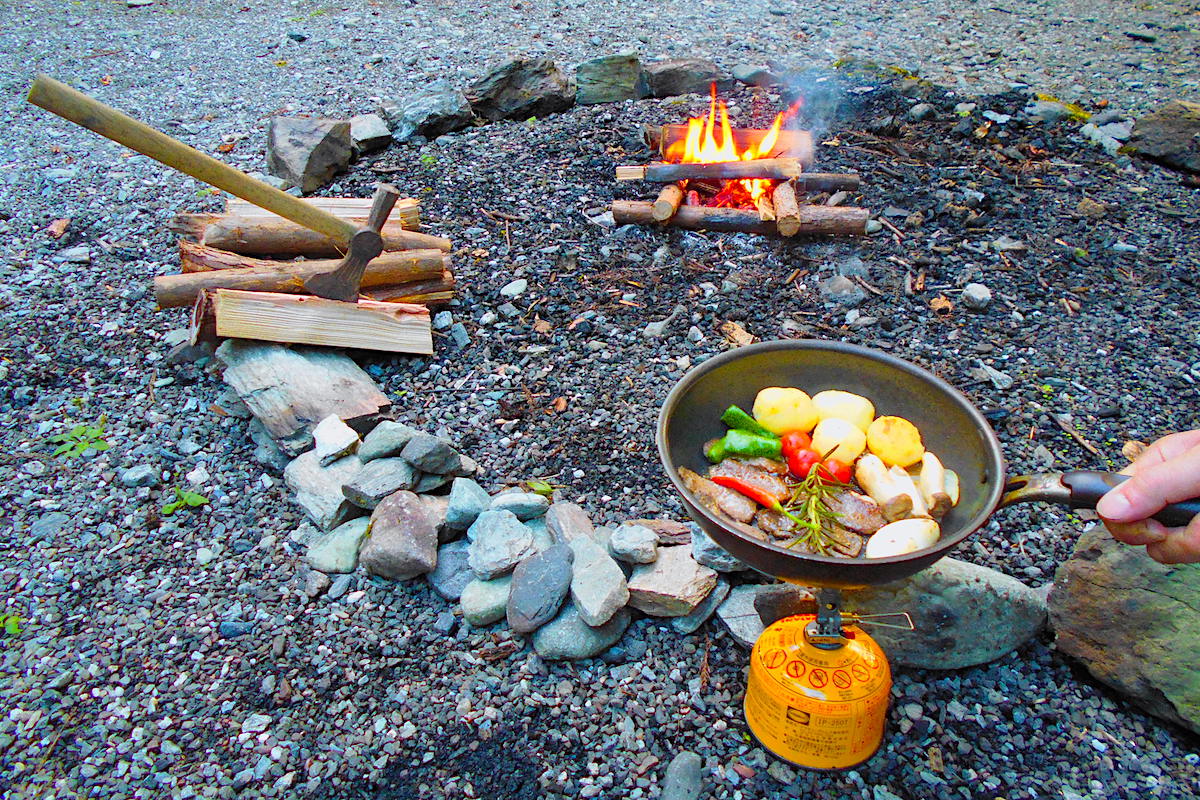 I got the deer meat from Iya’s hunter’s butchery and marinaded it for a few hours in a light mix of olive oil, soy sauce, and some spices. After slow cooking in the pan, the tender meat was mouth watering.

Iya’s local potatoes are smaller and denser than regular potatoes due to being grown in the rocky soil of the hillside farms, and they are available at several stores in Miyoshi. Before cooking it all together, I boiled the potatoes for a several minutes in order to make them softer. 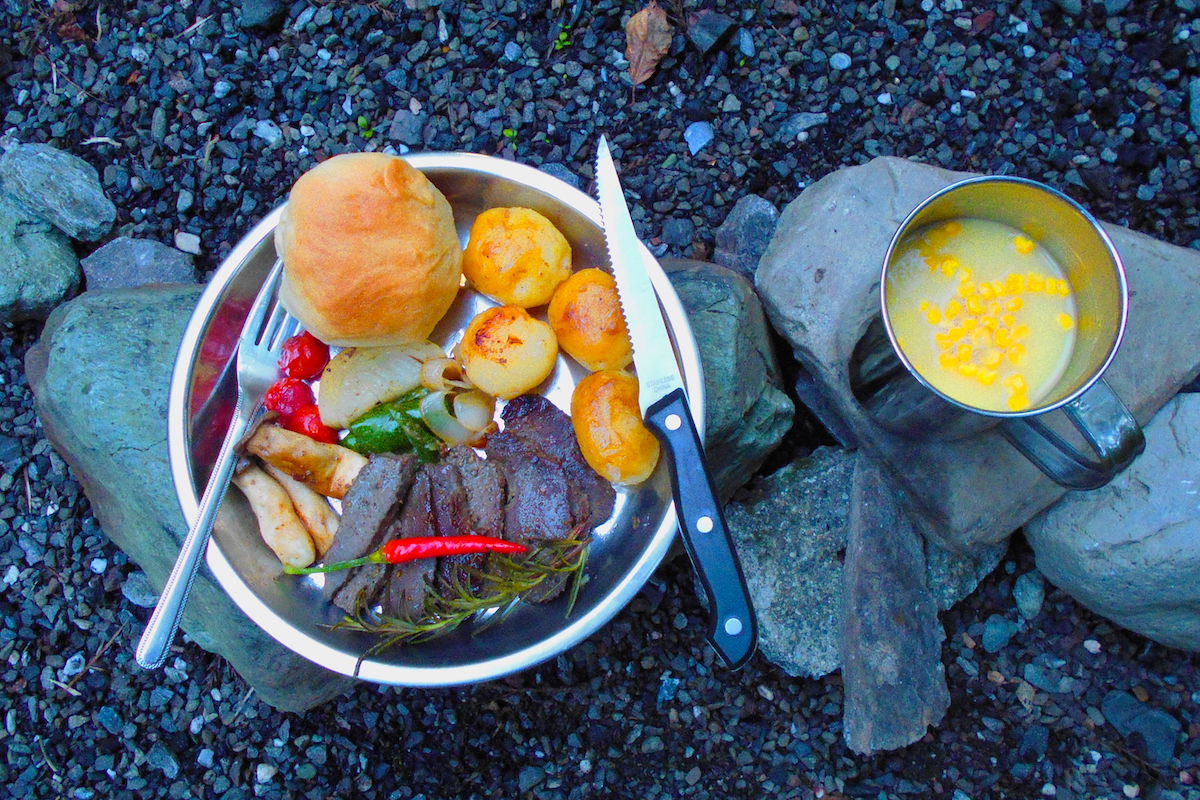 After gorging myself on the local flavors, I attempted to make some S’mores for dessert. Usually they are made by putting a roasted marshmallow into a type of sandwich between a pair of graham crackers and a piece of chocolate. 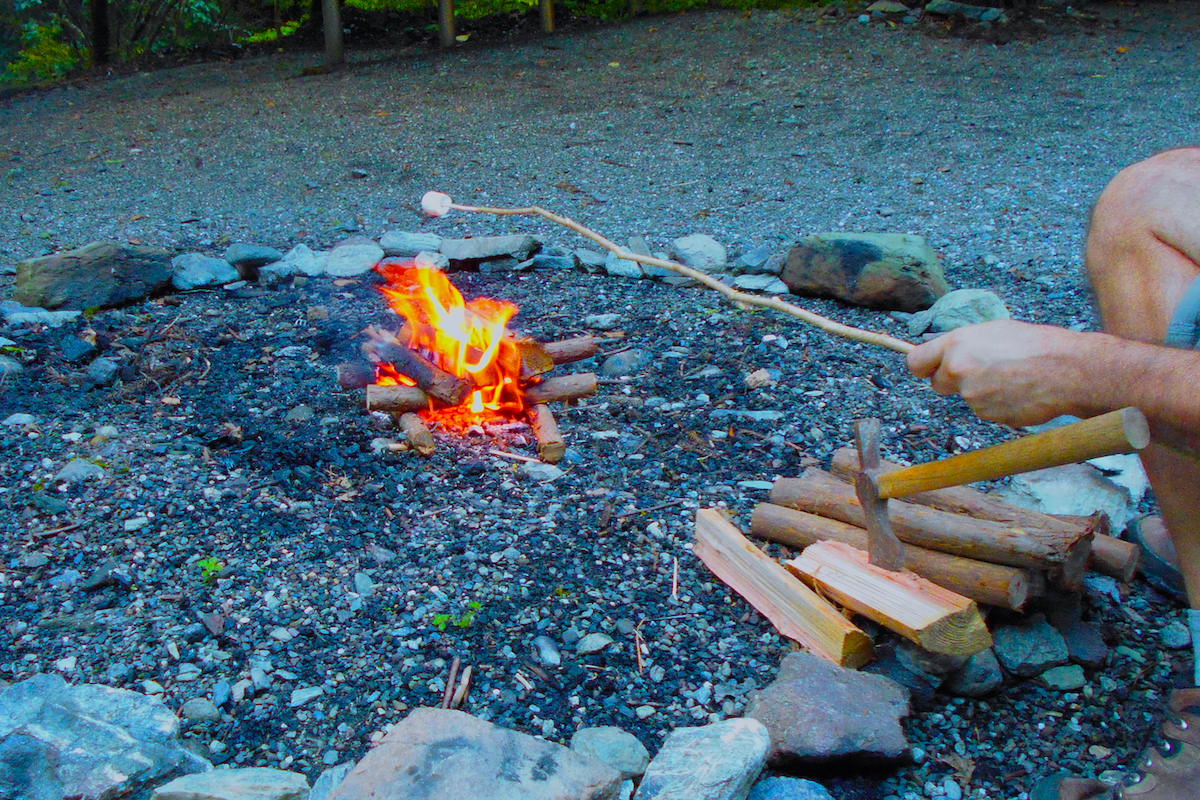 I was able to roast the marshmallows over the fire easily enough, but graham crackers weren’t available at the store, so instead I decided to improvise and used chocolate covered cookies. The results were a bit messy and not too pretty, but they did indeed taste so good that I wanted some more…

In Part 3 I will detail my next day at the campground, and explain how to access the site and where to buy some of the ingredients I used in cooking.

For more details in English on the Double Vine Bridges and access, check the IyaTime website here:

If looking to cook up some local wild game meat, you can find out more on the Iya Hunter’s butchery website (in Japanese):