After work he was hoping to have a break, but since the dance lesson started at 8pm, he drove directly over to the studio.

It’s his style to get to the studio just before the lesson starts, then stretch to the music in order to warm up and loosen his body. After stretching, he follows the teacher’s count and goes over the day’s choreography with everyone. 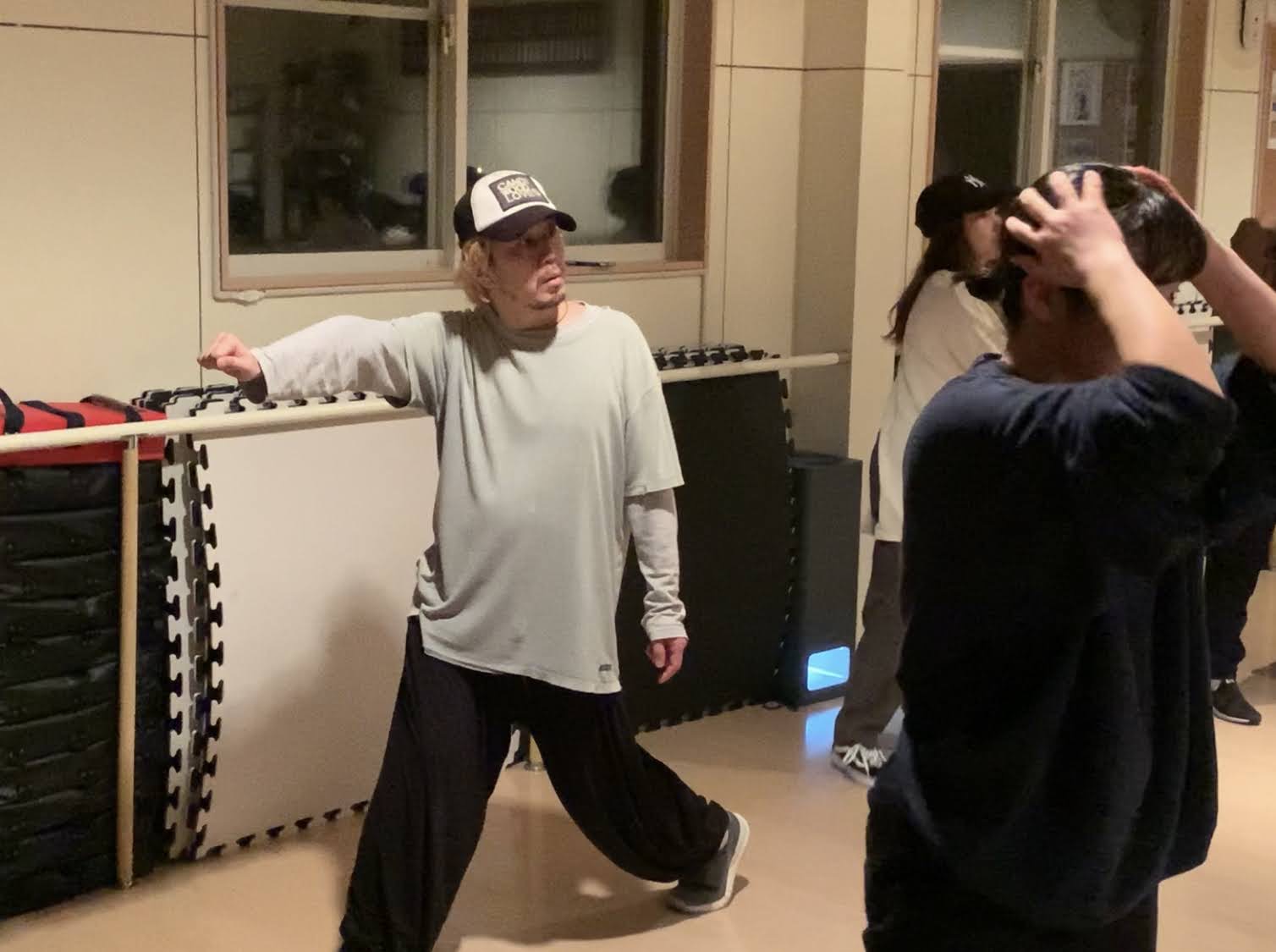 It’s only been about half a year since he took up dancing, and ever since starting his daily schedule has included stretching every morning and then going over the dance routines by himself. But the latest song has a pretty quick tempo, so it’s been tough for him to remember all the moves.

But as it goes, stretching and practicing the choreography has become very important for keeping his body in proper condition.

Back at class, after about 30 minutes of dancing, he takes a water break.

There are about 15 children and several women in their 20s at class this evening, but the only middle-aged man is Yamada.

It’s actually fairly common that the parents of the kids who take the class together with Yamada are younger than him.

Indeed, it seems a bit odd for such an older guy to be dancing to these up-tempo beats beside this much younger group of students. 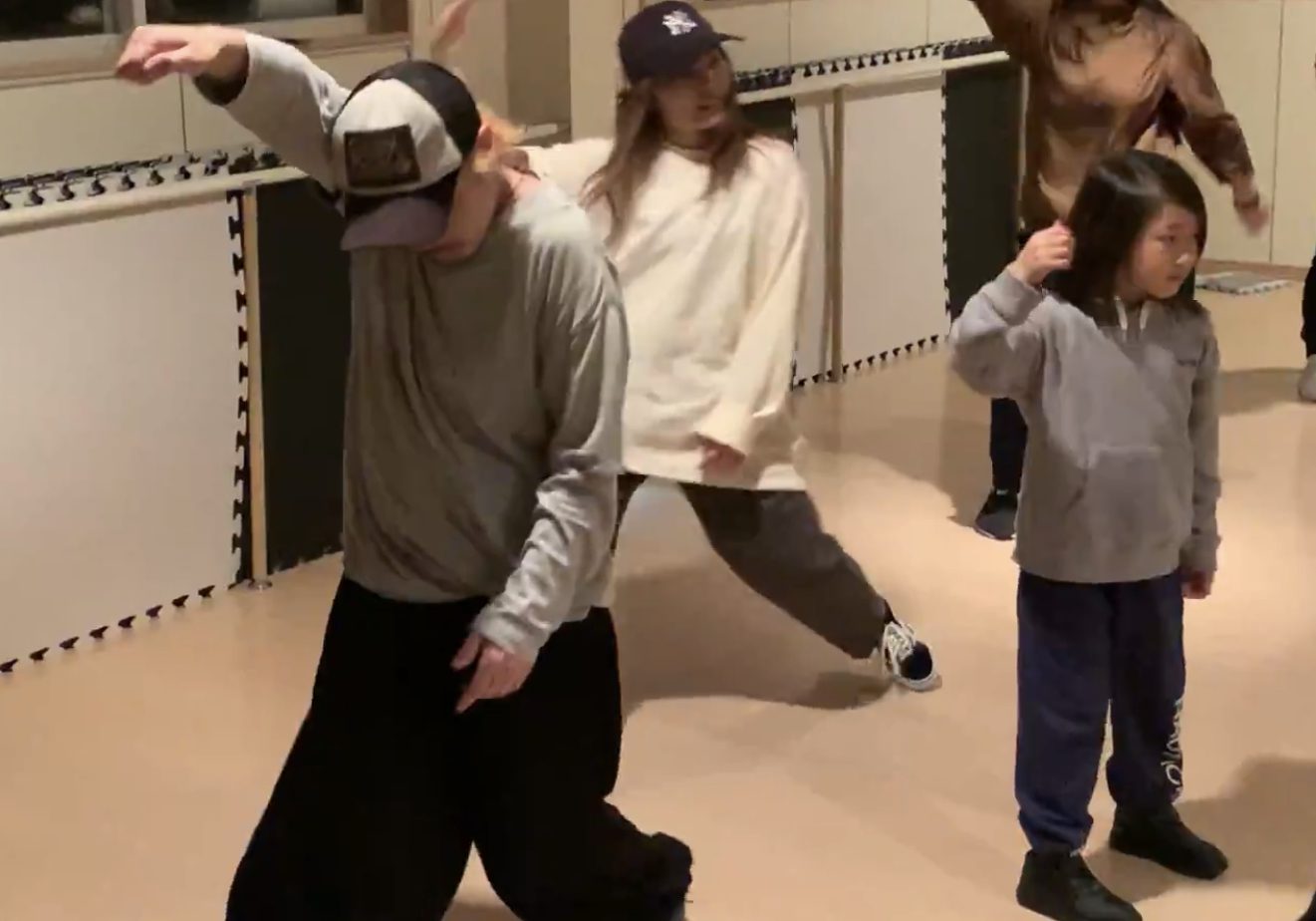 As he watches the teacher dance from behind while looking at himself in the mirror, he repeats the same moves over and over until the class finishes at 9:30pm.

At the end of the lesson, he films the teacher going through the choreography one more time so he can watch it at home to practice for the following week.

“People focus on themselves the most, and don’t watch each other all that much, so even if you make a mistake or do something embarrassing, they probably won’t notice or remember.” 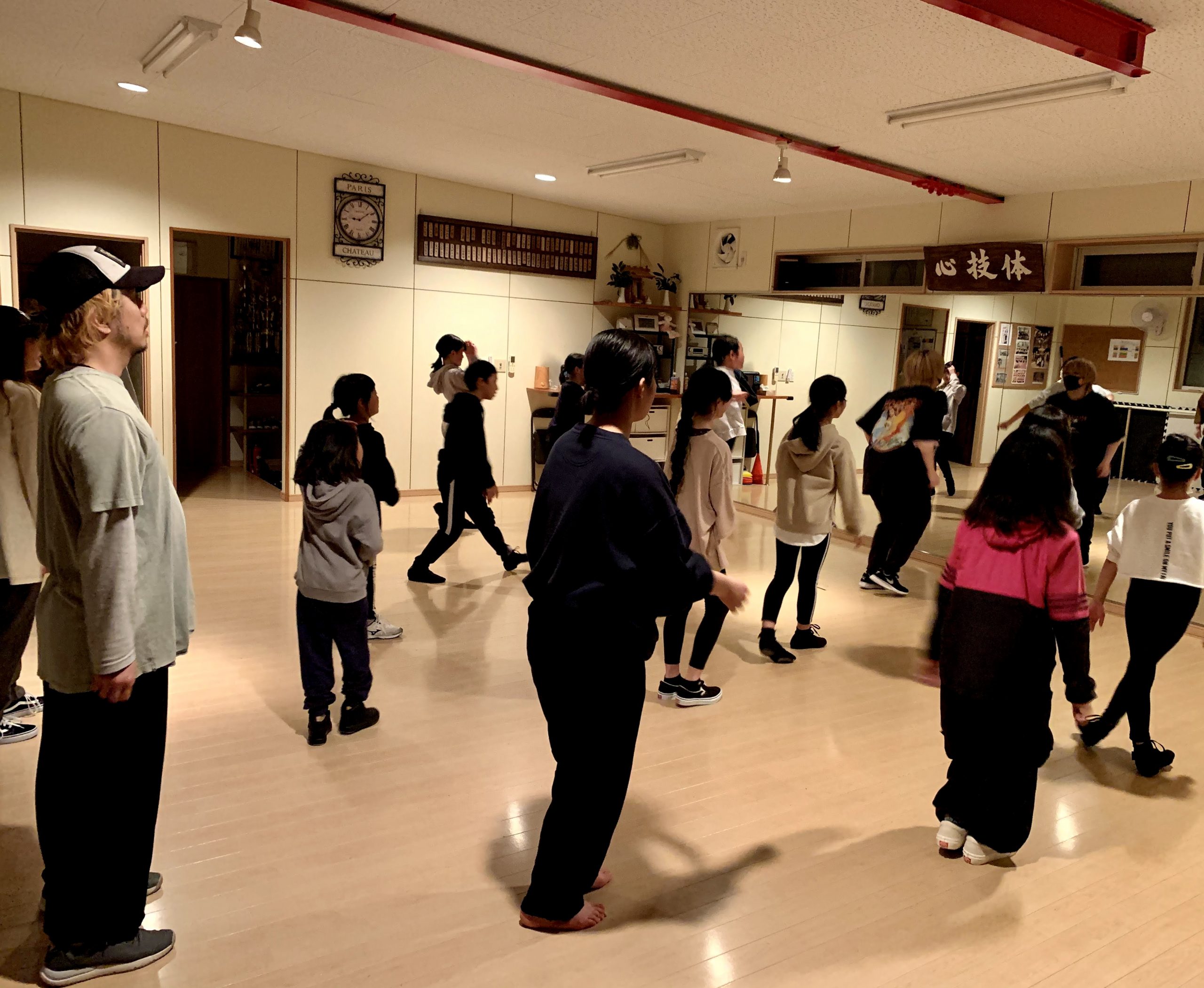 Certainly at first glance you may think this middle-aged man may be feeling embarrassed as he tries to keep up with all these children, but…

“If you want to learn something and you like it, it doesn’t matter what the situation is,” says Yamada, “I think (having such an open mind) is a benefit for life.”

Once, back when he first began dancing here, the only people in class other than Yamada were a bunch of 10 year olds, and he did feel embarrassed that time. But he took that awkward experience as a chance to develop his mind and overcome his anxieties.

During his 41 years, Ryota Yamada has led a fruitful life, including being in a band, studying English overseas, and eventually settling down in Miyoshi City where he took up dancing.

After moving to Miyoshi in 2017, he became the first manager of COCOxCROSS, which is located in the Sarada section of Ikeda in Miyoshi City. 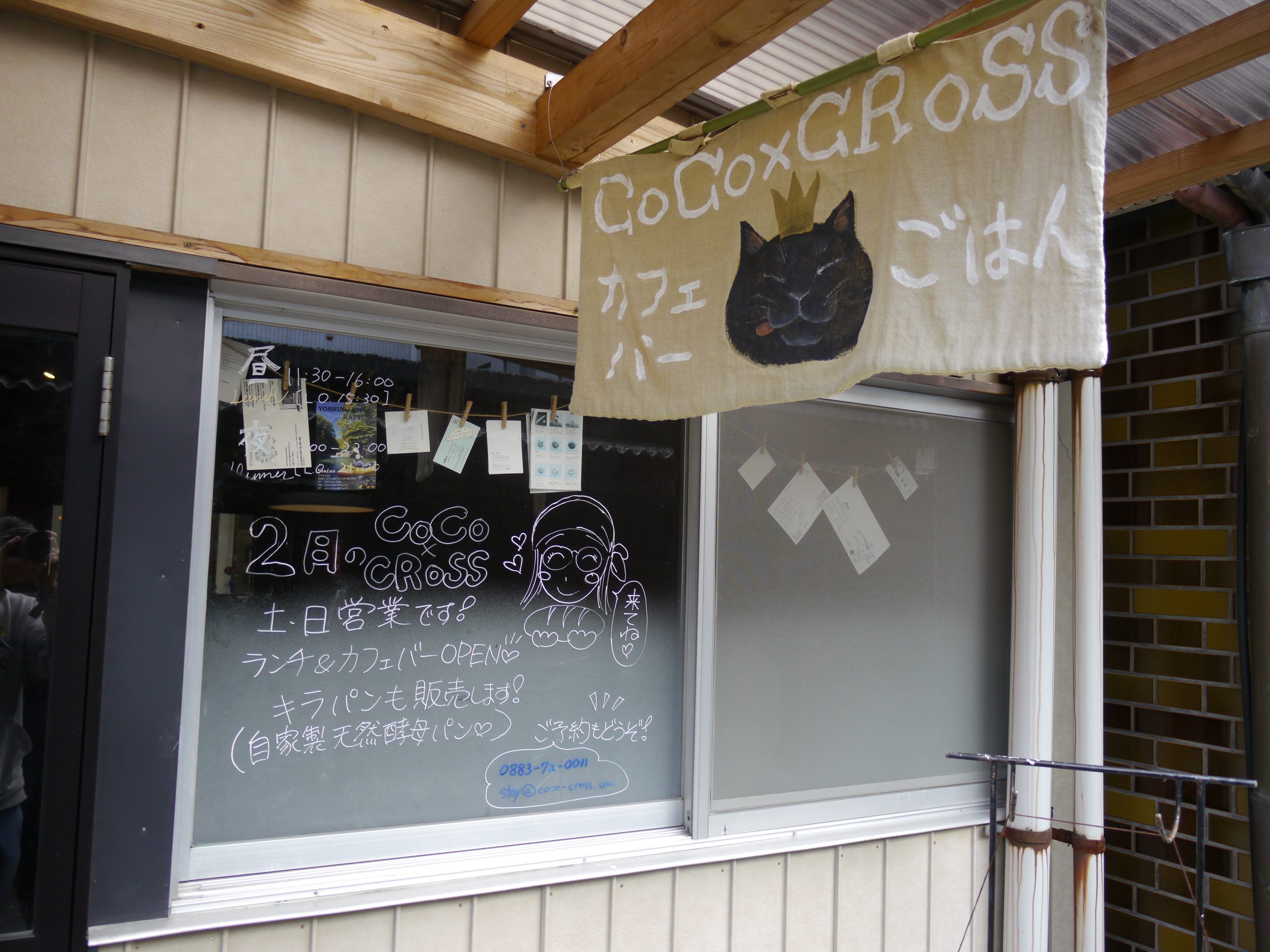 “After moving here I didn’t have any clear vision (for what to do), but if it looks like fun, I like to try it,” explains Yamada, “That’s my character.”

He says his reason for moving to Miyoshi is rooted in his curiosity. “I just wanted to change my environment. I wanted to go somewhere I didn’t know.”

The reason for doing things should simply be because you want to do it.

Yamada says, for example, if someone were interested in studying English, “Then you should prioritize the feeling of wanting to do it instead of thinking about how there may be no foreigners around, or how you may have no chance to ever use this skill. Because by doing it based solely on your desire, then you’ll actually be increasing your chances to interact, and such opportunities will come about naturally.”

“Furthernore, by continuing to use English, you get into the habit of getting information through English by way of books and articles, which leads to having a wider variety of ideas,” explained Yamada, “So you don’t only learn English, but you can learn lots of other things at the same time.”

As it goes, due to having such energy and being so active, Yamada has been offered several new chances for business, but it’s surprising to hear that he doesn’t agree with this image of vitality. “You may think I’m full of passion and there are lots of things I want to do, but I don’t have any final goals. In fact, I wouldn’t call myself overly energetic.”

However, he does have his own rules to life, including to only eat and wear whatever he agrees with, and thereby live with only the things that he connects with. And it’s his objective to be continually purifying this focus.

This is his core way of life.

Where he works over at COCOxCROSS there are a lot of books since it’s the owner’s hobby to collect them.

And perhaps due to the influence of all these books, Yamada has become quite good at putting his thoughts into words, and his way of living genuinely means there are no lies in what he says.

For him, it’s quite natural to do the seemingly difficult act of “telling what he’s all about” without exaggeration. 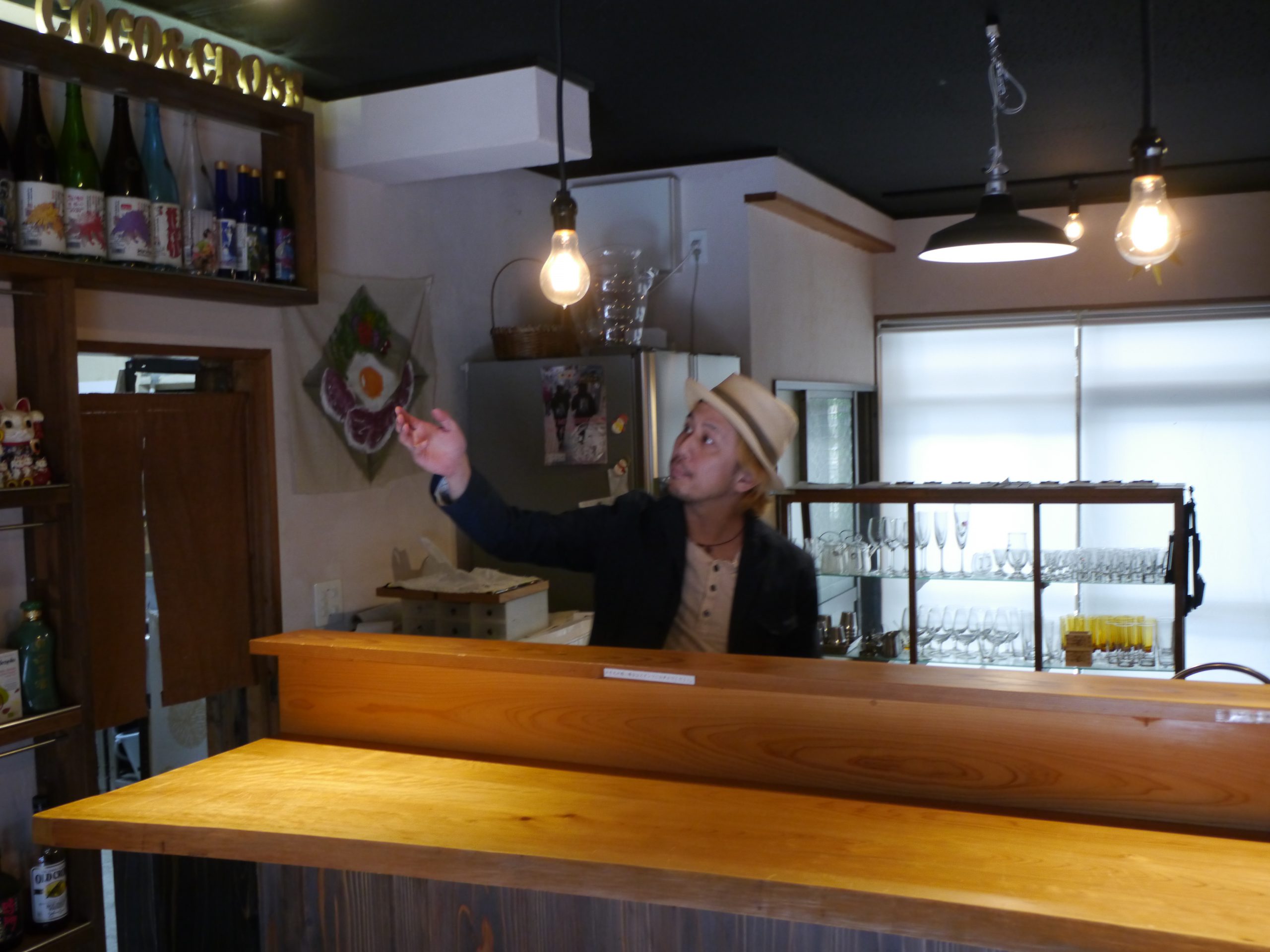 And according to Yamada, he prefers working behind the scenes as a manager rather than being the star on the stage.

After speaking with him for a while, it was impressive to hear him speak about such deep things so smoothly, despite how his dancing ability wasn’t nearly as fluid.

So we will introduce some of the other new projects and challenges this strong-willed man has decided to take up.

Check out what Ryota Yamada is up to on his Facebook page:
https://www.facebook.com/ryota.yamada.52