In One of Japan’s Three Unexplored Regions, Three Generations Cross the Iya-no-Kazurabashi of Miyoshi City (Part 1)

Miyoshi City’s Iya Valley is said to be one of Japan’s “Three Hidden Regions” and within this unexplored place lies the famed Kazurabashi Vine Bridge which, upon seeing it, immediately takes one back to days of yore. Made from approximately 6 tons of vine that are taken from the surrounding mountains, this nationally designated Important Tangible Folk Culture Property has its vines replaced every tree years.

For about 6 weeks this winter the bridge underwent its triennial vine replacement, and on the morning of February 22, 2021 the official completion ceremony was held, thereby re-opening the bridge for everyone. 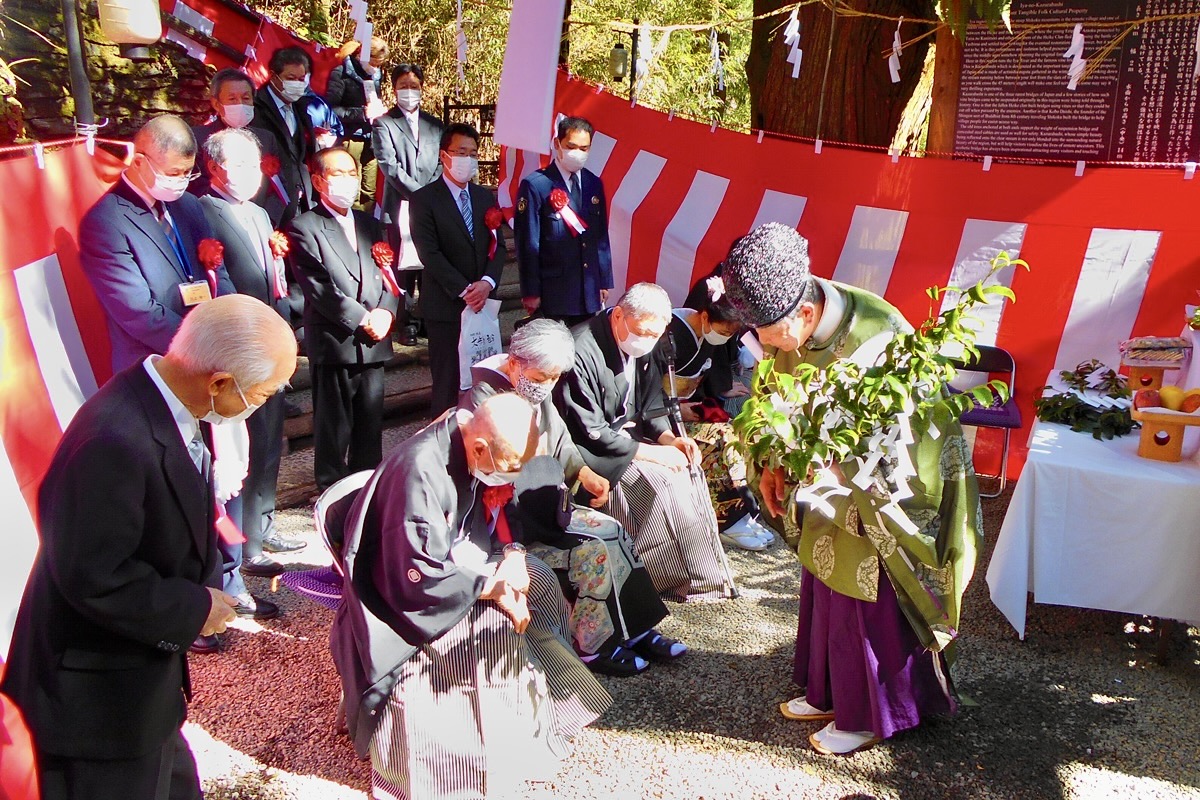 At the ceremony, various leaders of Miyoshi were here to mark the occasion, including the city mayor and the heads of many organizations involved with the bridge. Also here was the local Shinto Priest to bless the bridge, as well as the honorary citizens who were to be the first people to auspiciously walk cross.

As is the tradition across Japan which has been taking place for hundreds of years, whenever a new bridge is built, the first people to honorarily cross are a family composed of three generations of married couples.

The purpose of this tradition is from the concept that a married couple represents a link between two entities (as does a bridge), and three generations of the same family signify longevity and prosperity, and this good fortune is thereby bestowed to any new bridge. 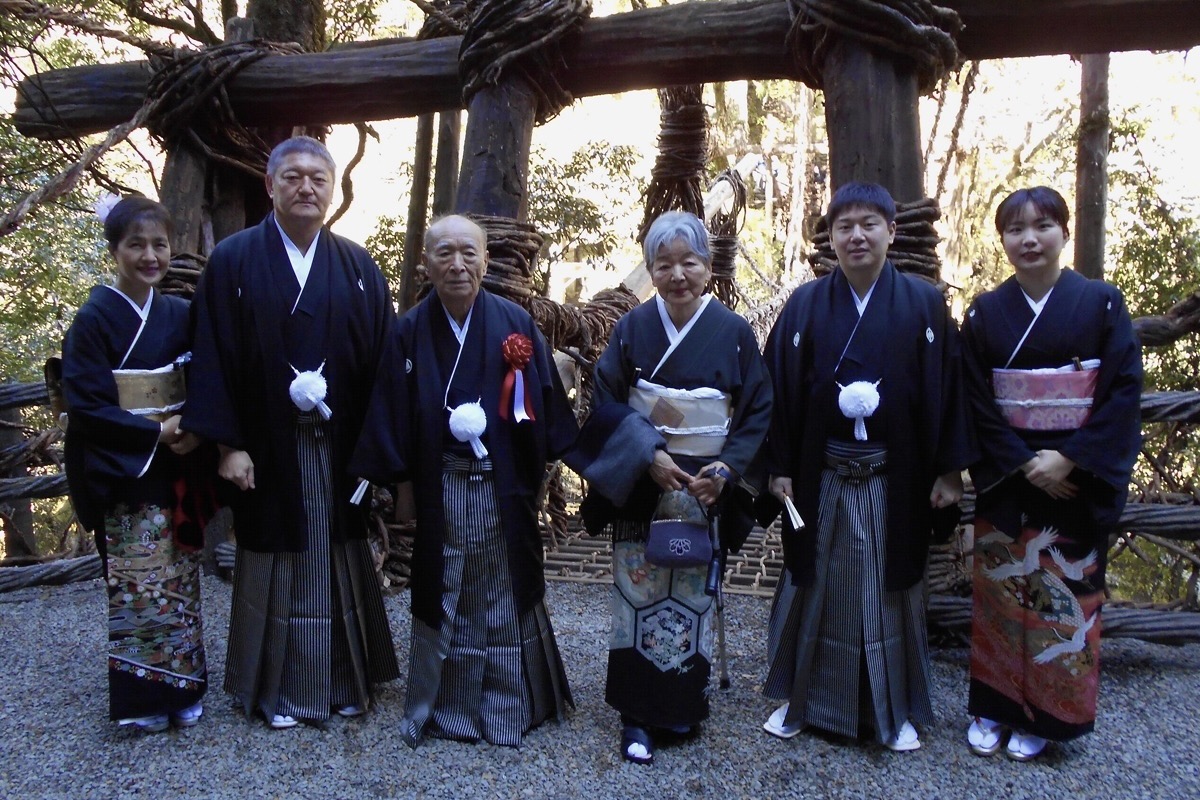 The honorarily couples chosen to be the first to cross were from the Tani Family of the Iya Valley, which included Eiji and Mineyo Tani (oldest generation), Satoshi and Noriko Tani (middle generation), and Hiroki and Haruka Tani (youngest generation).

For the ceremony, first a Shinto ritual was held, as well as speeches and presentations. After officially cutting the ribbon, it was finally time to cross. Starting with the priest, next came the Tani Family in descending order of generation. 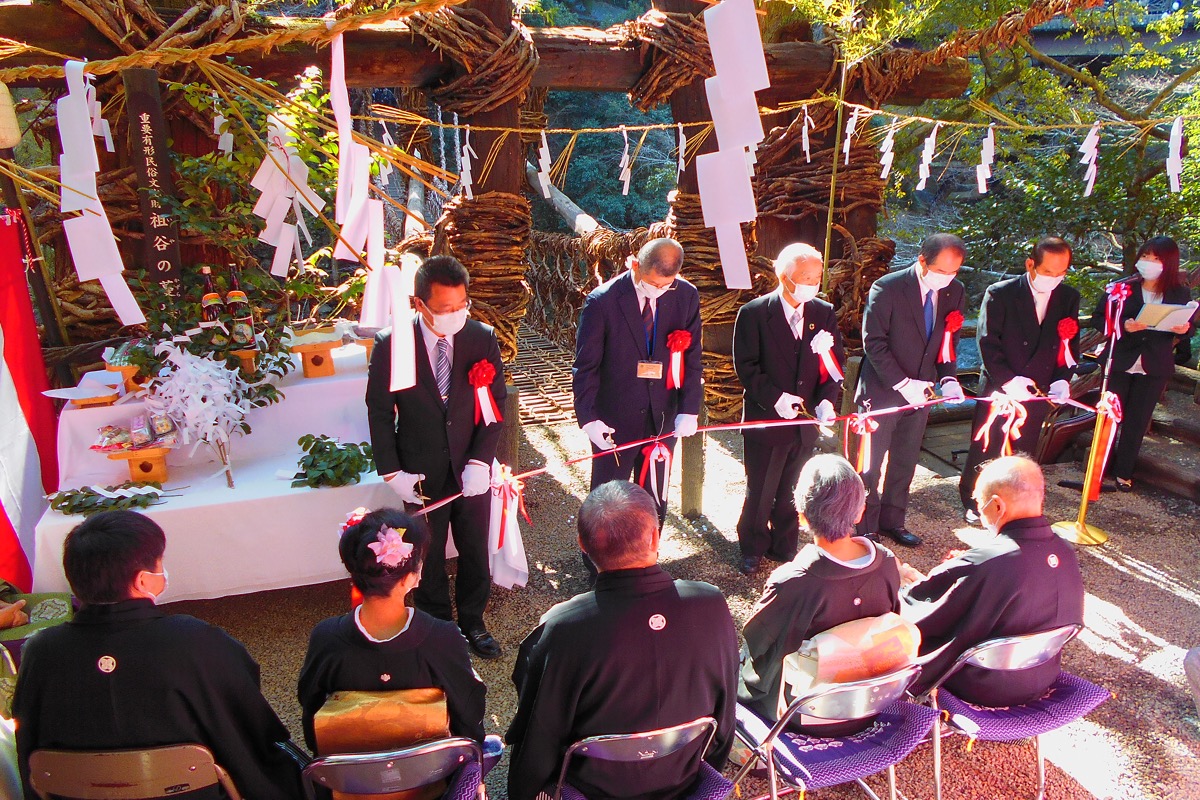 Unlike more stable bridges, the Kazurabashi not only shakes every time you step, but the wooden walkway slats are about 15cm apart, and between these open spaces you can see the Iya River flowing past 14 meters below.

On the day of the event the weather was particularly nice even though it was mid-February, and the newly rebuilt bridge with its fresh vines looked spectacular. And the appearance of the kimono-clad family led by the ornate priest crossing the bridge made me think of the long history this ancient structure holds. 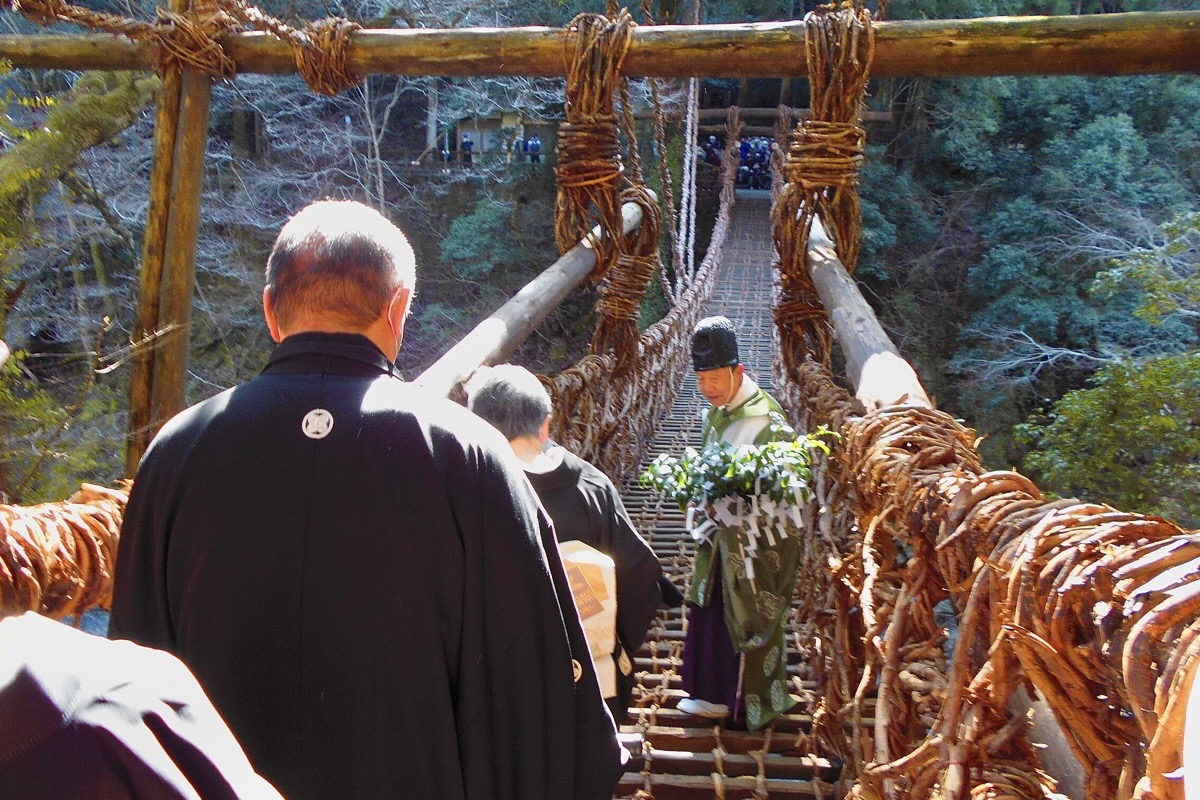 After carefully making their way across and now safely back on solid ground, the Tani Family was full of smiles as they talked of the experience of wearing kimonos over the creaking structure, which is usually hard enough to do in street clothes and in regular shoes.

In particular, they all commented on how scared they were about slipping due to wearing traditional zouri sandals. 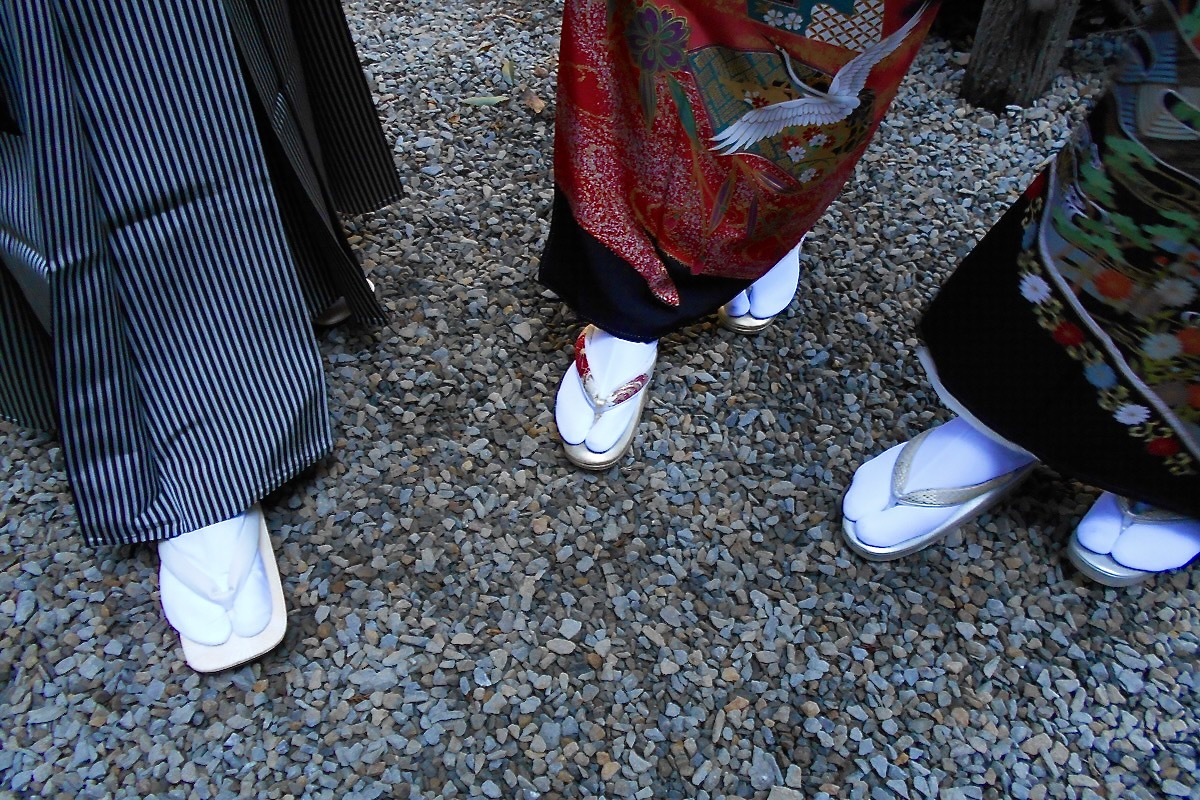 But they also understood the gravity of they event and what it meant. “The Kazurabashi needs to be forever maintained,” explained the eldest Tani, “It needs to be passed on to future generations.”

And hopefully the Kazurabashi and its traditions will indeed be upheld. According to Mr. Miyata of the Miyoshi City Board of Education, the organization in charge of the bridge’s preservation, it is becoming an increasing challenge to find a suitable local family for the first crossing because people tend to get married later in life nowadays and there are not many families with three generations of married couples living in the area. However, Miyoshi City is making efforts to support the lives of local residents and to welcome others to move in, so that families continue to prosper and they can continue the long-held traditions of the Kazurabashi.

In Part 2, I will introduce the story of the Tani family and their three generations of life in the Iya Valley.