The River Face is a raft racing team based in Miyoshi, Tokushima. It was formed in 2007, and won the IRF World Rafting Championships in 2017 when they were held on the Yoshino River on the island of Shikoku. We spoke with the captain of this strong team, Hanako Ita.

Hanako Ita joined The River Face in 2013. She is a social worker in Miyoshi, but practices every day as she strives to help her team become number one in the world. The River Face is an amateur team, with all members, including Ita, working other jobs while they train and compete. They have a limited amount of time each day to practice, so currently practices are usually held from 5:30 to 7:00 every morning from Wednesday to Saturday, before everyone starts work. They also practice twice on Sundays, for three hours at a time in the morning and the afternoon, and practices are held on Lake Ikeda or in the Oboke and Koboke areas on the Yoshino River.

The team does not have a full-time coach. They plan out each practice, look back on how it went, then change things as they go in a process of trial and error. All members of the team speak their minds on equal terms with the rest, regardless of role or length of career. With various opinions being shared it is sometimes difficult to make a decision, but as captain, Ita thinks that because everyone discusses how the practices should be run and what the team’s direction should be, they are able to gain a sense of independence as they practice.

“We compete while holding jobs, so we still get that connection with people, and get the support of our neighbors and co-workers, which is a lot of help,” Ita says. 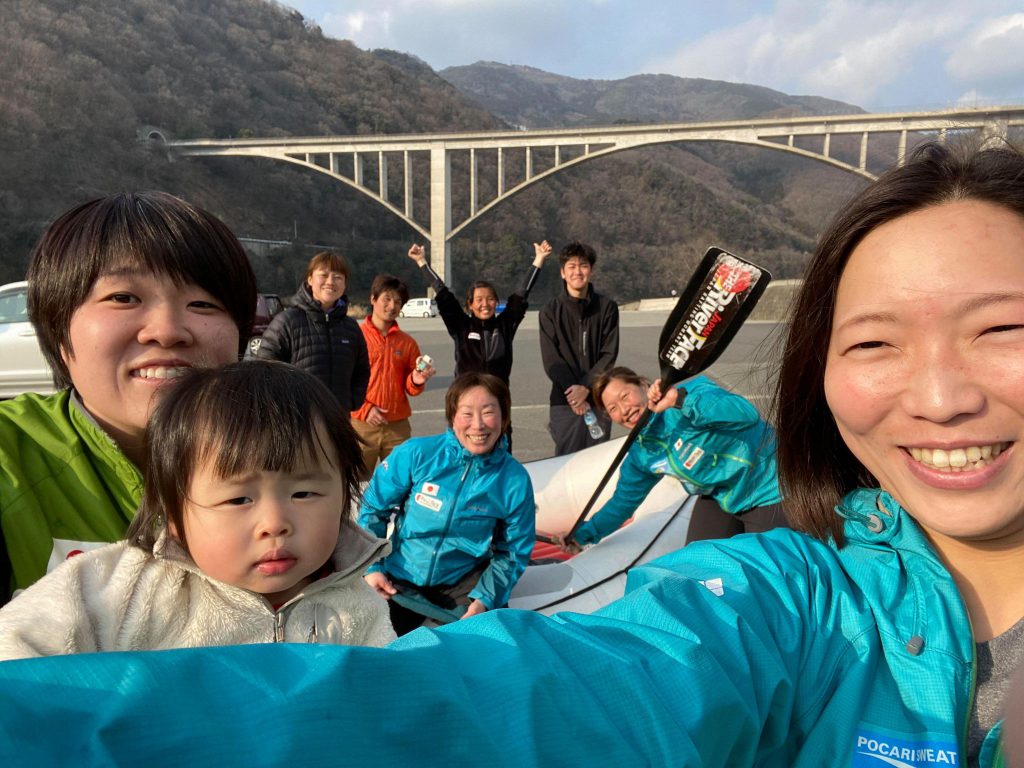 It’s not just co-workers either; the local community offers their support, too. Ita says that she often meets people at supermarkets and bathhouses, or on breaks during practice, who recognize her and offer encouragement. People cheering them on during raft racing competitions is also helpful, but it’s these casual, daily interactions that show them that people know who they are and what they are doing, and that might be the biggest encouragement of all.

Ita told us about one recent interaction she had with a local during a cold wave that hit the region over the New Year holidays. Miyoshi was also affected, and many people found their water pipes freezing and bursting. The pipes at Ita’s home burst as well, but an older gentleman who often talks to her around Lake Ikeda repaired them for her.

“The older guys are really important when you live in the countryside,” Ita says in an oddly persuasive way. She seems to have had a lot of people like that help her out in the past, but we will leave that conversation for next time.

Each member of the team works in a different place, so it is rare to have everyone together for practice at the same time, which is an issue that Ita is currently worried about. In addition, with so many competitions being cancelled this year, the team has few chances to demonstrate whether or not their practices are paying off.

That being said, she can still enjoy rafting in these conditions and rowing with her teammates, and she continues to practice daily. She has also started weight training, doing bench press, deadlifts, squats, and more, and that is helping her keep herself motivated. She tells us happily that she can see real improvements in the weights and number of reps she is pulling off, which is making her stronger and making it easier to row during practice.

There is a lot of raft racing at the collegiate level, but there aren’t as many options for someone who wants to become a world champion after they graduate. The River Face was formed in 2007 and has won the world championships, but it has always been an amateur team. Ita decided to join the team after spending some time practicing with them when she was a university student. It wasn’t just because of how spectacular they looked during competition – it was the respect she had for their sincere attitude toward balancing rafting with work, running workshops to get publicity, and trying to secure funding. Another major factor behind her taking this path was a big breakup she had as a student, and her strong desire to become a more independent woman.

Ita wants to always be strong, both as team captain and as a woman, and all who meet her get a sense of her genuine strength and femininity.