Home > ENGLISH > Mountains, rivers, and snowboarding! The kids enjoy the outdoors at Miyoshi City, Tokushima Prefecture to the fullest!

Mountains, rivers, and snowboarding! The kids enjoy the outdoors at Miyoshi City, Tokushima Prefecture to the fullest! 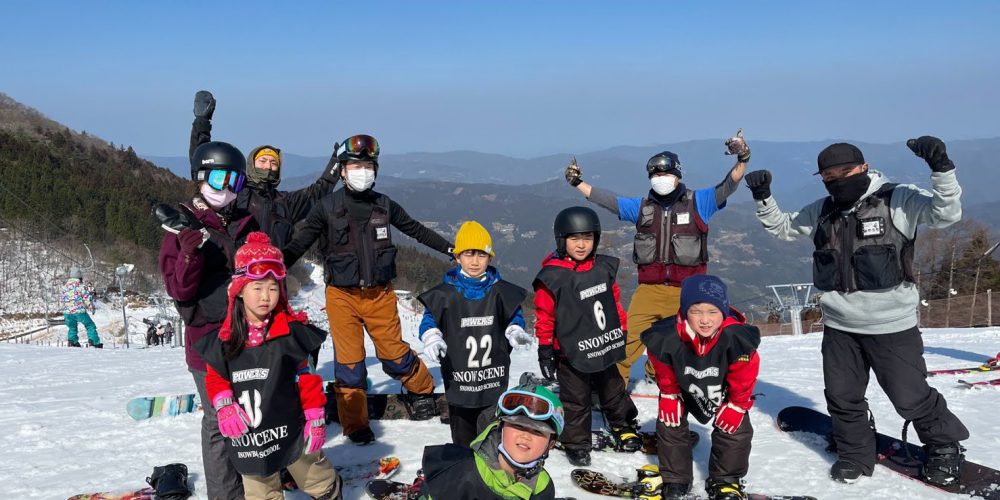 Mountains, rivers, and snowboarding! The kids enjoy the outdoors at Miyoshi City, Tokushima Prefecture to the fullest!

Wakeboarding, stand-up paddling, rafting, and more. The Miyoshi City Water Kids who delight in watersports head to the snow-covered mountains!

On this day, we headed to Ikawa Ski Resort Kainayama, in Ikawacho, Miyoshi City. With few slopes on Shikoku Island, this is a cherished ski resort for enjoying winter sports. With the fine weather continuing from the day prior to interview day, the slopes were bustling with people.

Usually, these kids can be spotted, bursting with energy, at the rivers or lakes centering around Ikeda Lake of Miyoshi City. Even they looked a little nervous on the snow. On this day, the kids were taking on the challenge of snowboarding!

In the beginning, while taking a lesson from an instructor, they gradually got used to the snow. They learned carefully how to clip their boots into the board, how to fall, and other techniques. The best way to become familiar with snow is to come into contact with it, so they all lay in the snow and got the feeling for it with their whole bodies. 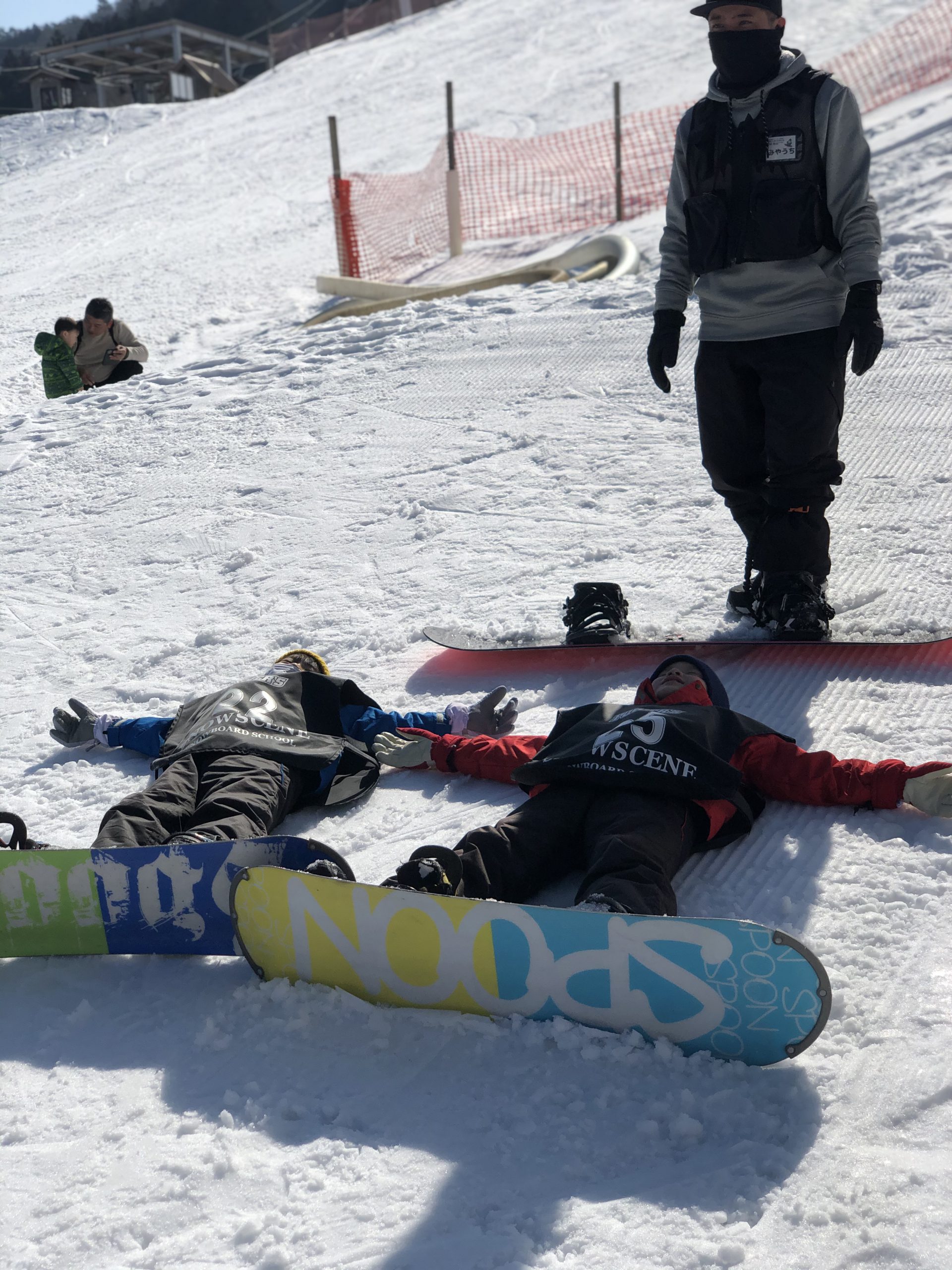 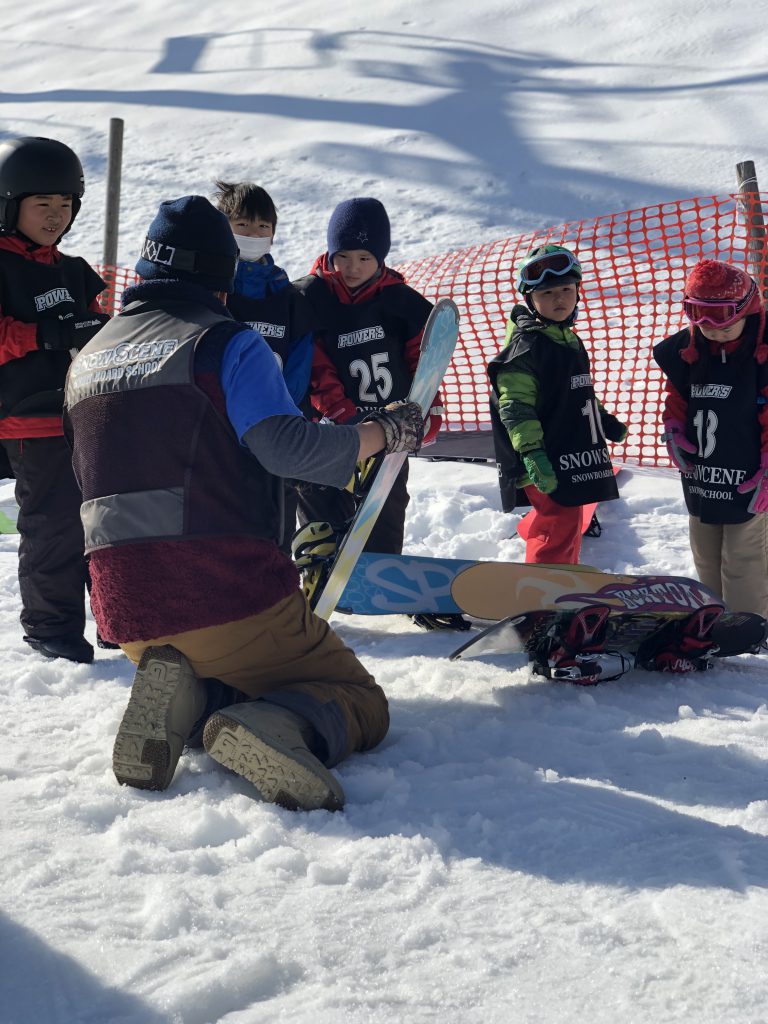 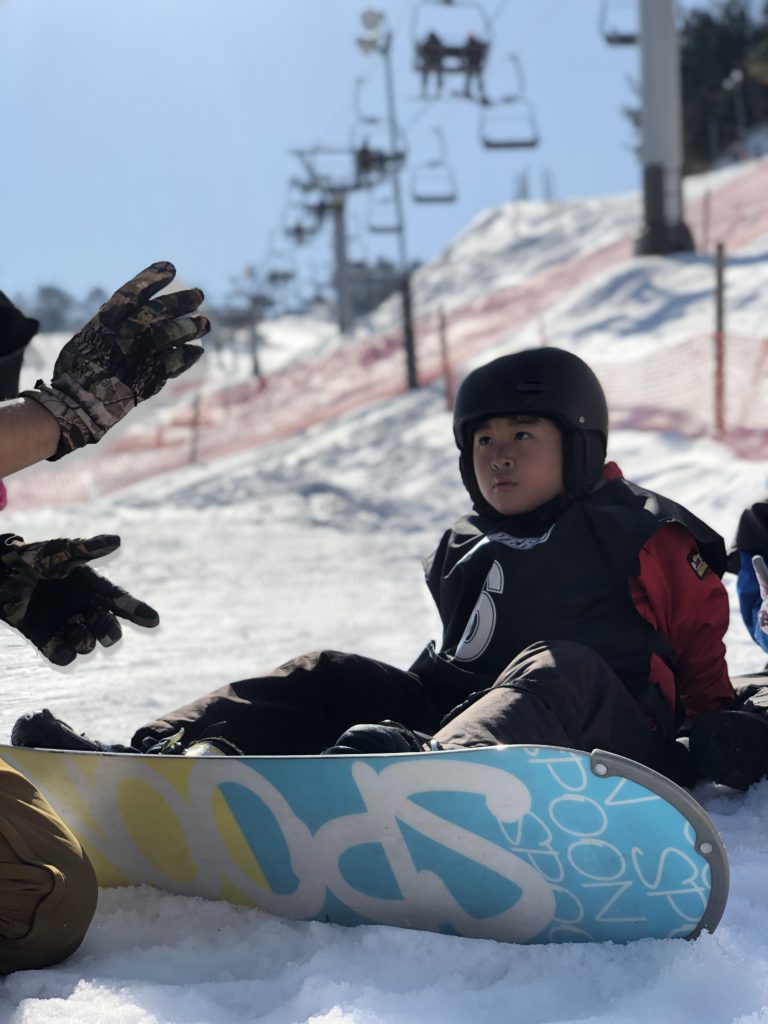 The weather was great, and the photos came out magically! The parents watching the lesson also got into the spirit with photography.

With the words from the instructor, “Go on! Keep on snapping!” the photographers seemed to get even more excited, taking shots from a whole range of angles. After plenty of photos had been taken, the kids and parents had fun boarding together.

Among the Water Kids who participated were members of Ikedako Eleven, the wakeboard team that participated at the Wakeboard World Championships held at Ikeda Lake, Miyoshi City, in 2018. Clearly being the wakeboarders that they are, the Water Kids were quite at home on their boards. With serious looks in their eyes while taking the lesson, they improved fast and took delight in their own riding on the snowboards.

After the end of the lesson, the kids fueled up with a meal and continued boarding until closing time at the ski resort. “One last ride!” being repeated two or three times was a recurring theme. It probably goes to show just how much fun was had snowboarding with friends, and parents and kids all together. 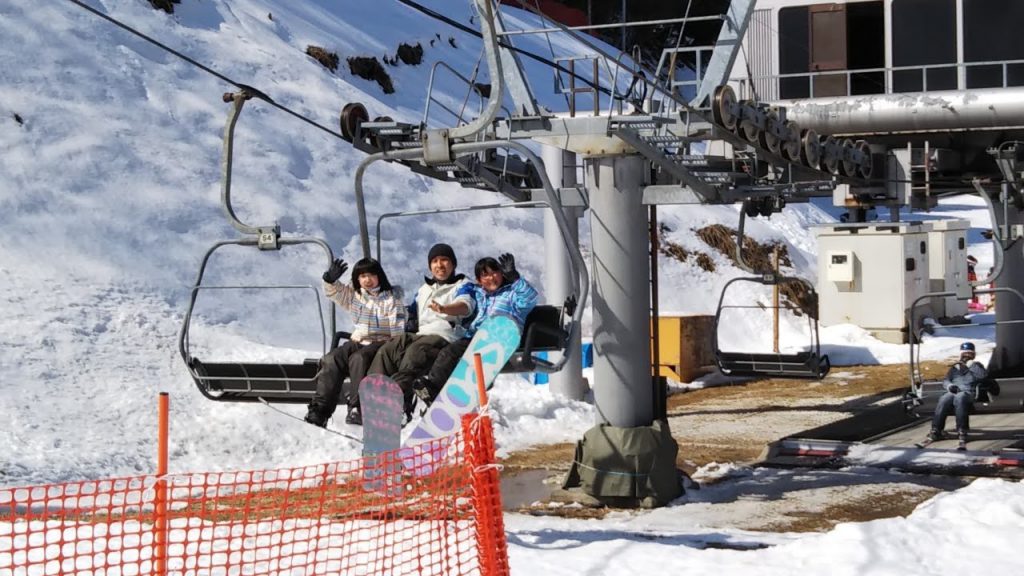 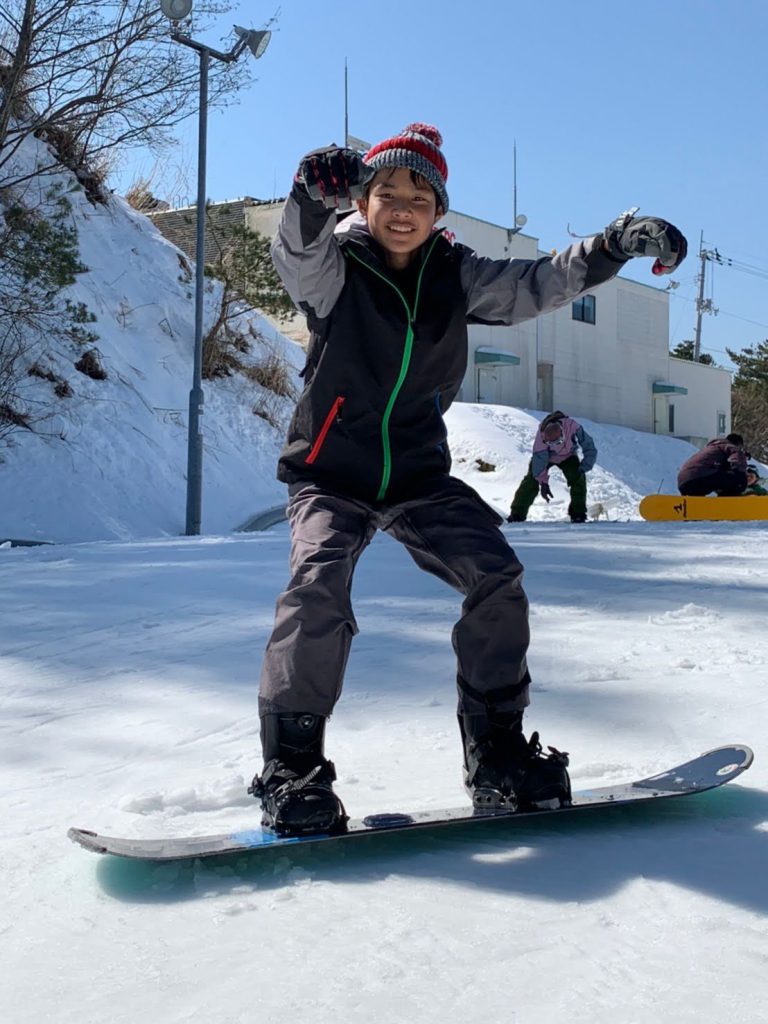 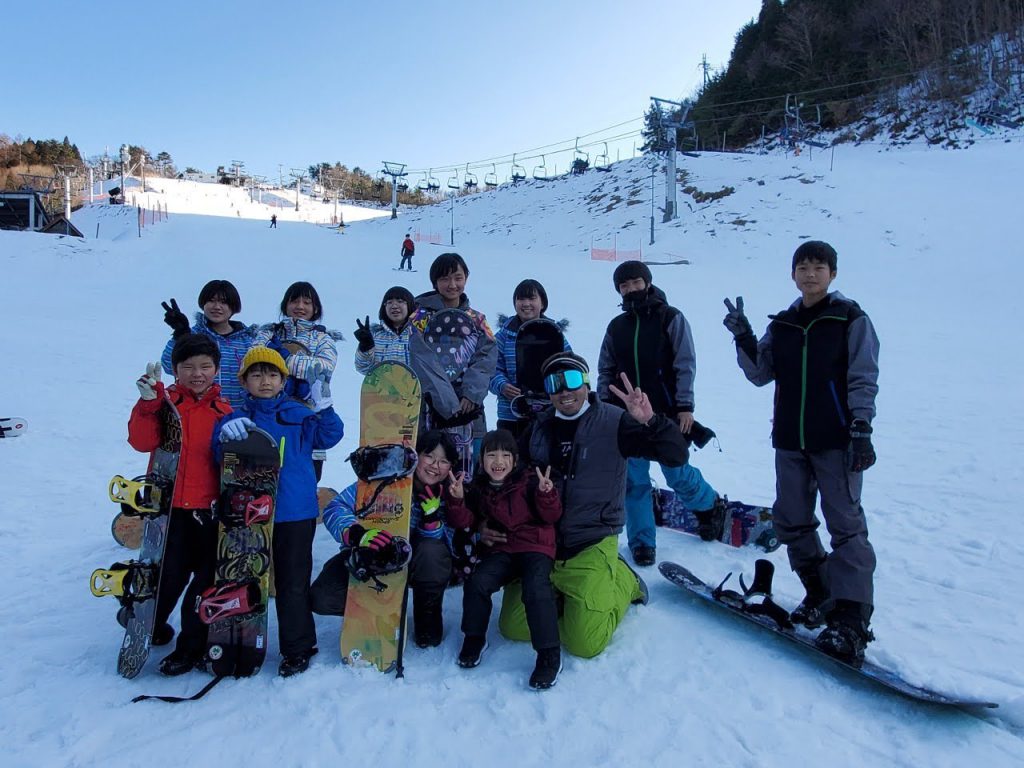 Seeing everyone having a great time, the kids who started out enjoying sleds accepted the challenge of snowboarding too! Everyone enjoyed the snowy mountain to their heart’s content. 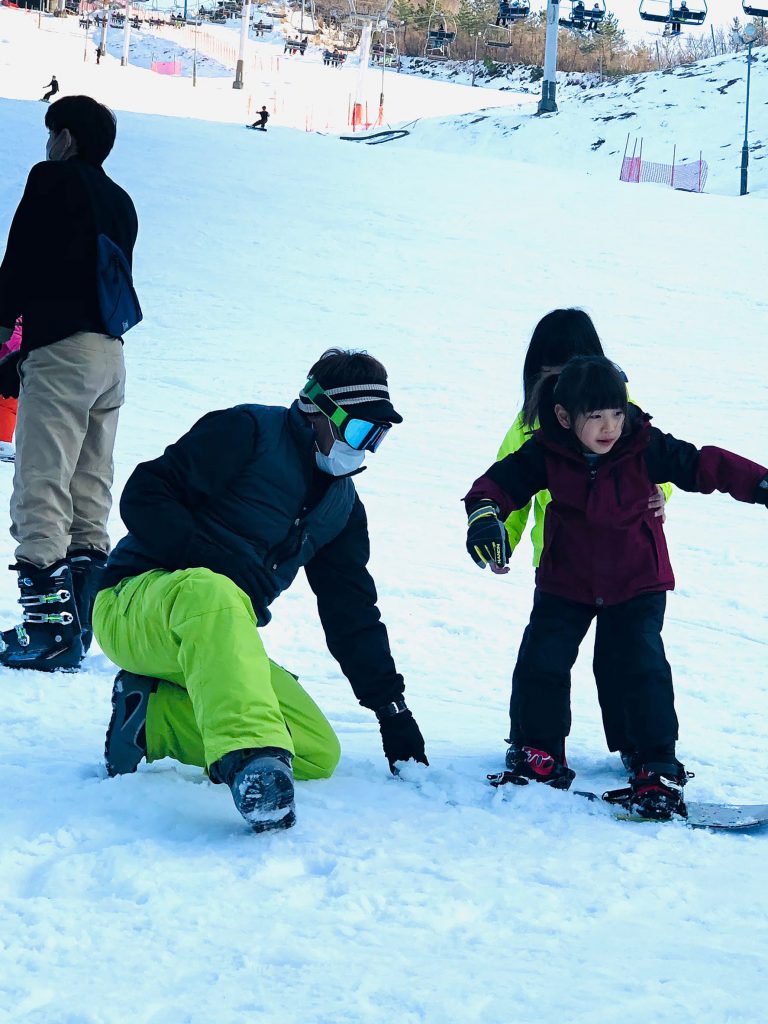 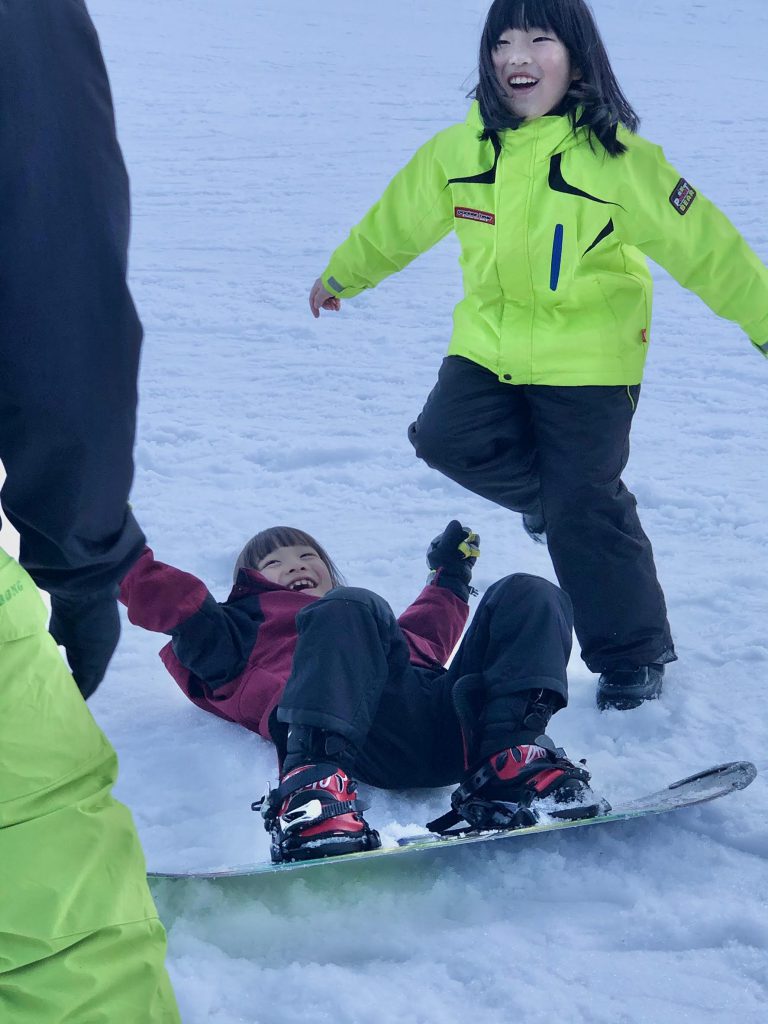 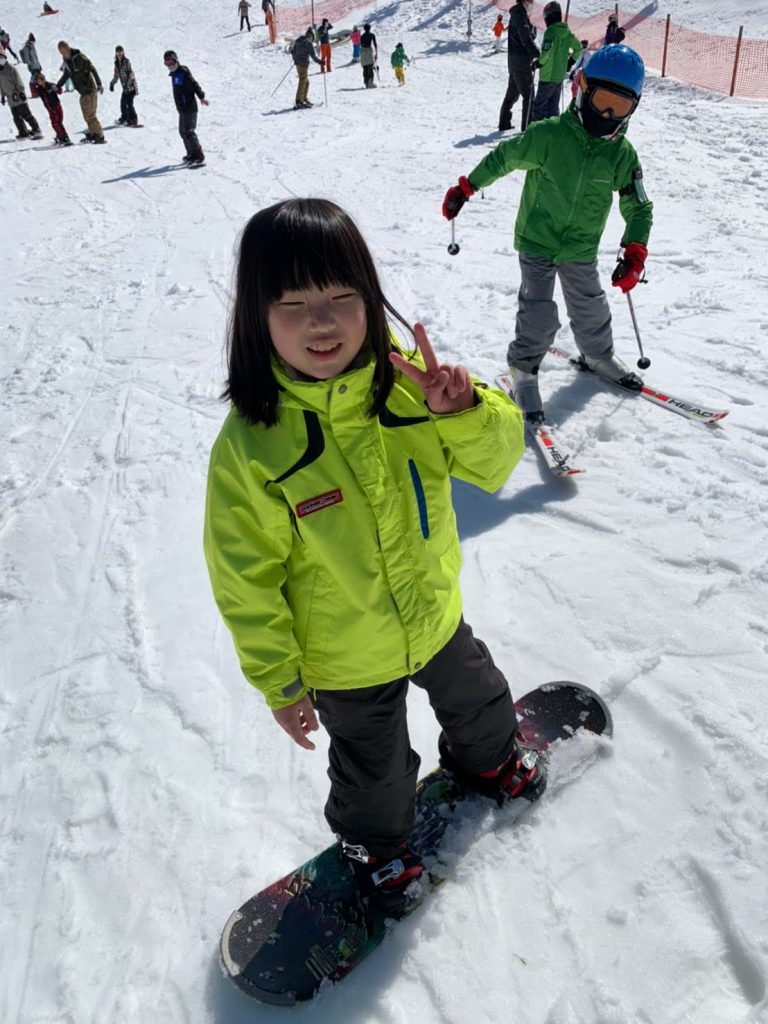 It goes without saying that the kids, exhausted from their day, slept soundly in the car on the way home.

One of the great things about outdoor sports is that you get to see a side of kids that doesn’t show when they’re at school or at home. That look when embarking on a challenge, the look when they’re hurting from a failure, that moment of unexpected growth, and more. They show us many expressions.

These kids surely got a sense of the great outdoor fields in their hometown, not only with watersports in abundance at the river basin of the Yoshino River, Miyoshi City, Tokushima Prefecture, but also through the experience of winter sports that can be enjoyed within the very same city.

How many more sleeps until the season to have fun playing in the river comes? Here we revel in the outdoors all year round! 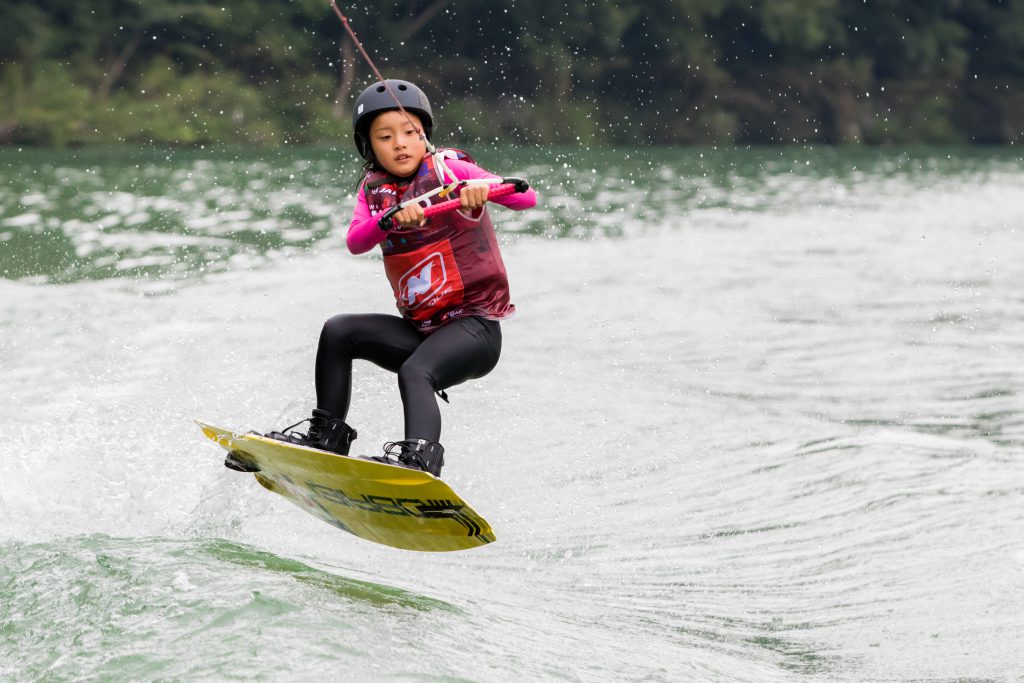 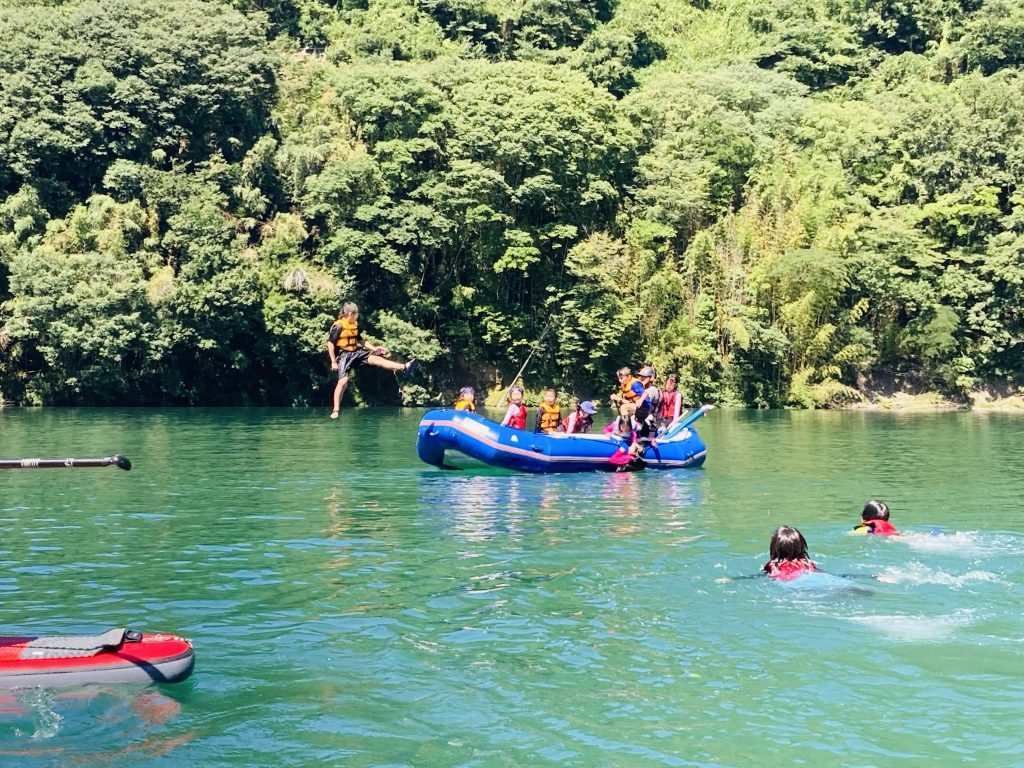 In Miyoshi City, on the theme of “Play together with the Earth,” Water Kids Club activities are conducted throughout the year, for its members to have fun with water sports and outdoor sports.

People from outside the city can also participate, so come on, join in, and enjoy a frolic in nature!