During Japan’s Muromachi Period (1336 – 1573), the Shikoku 88 Temple Ohenro Pilgrimage was mainly performed for spiritual training by the most devout, however in the later Edo Period (1603 – 1868) the pilgrimage became popular within the general public as a means to attain worldly wealth. Nowadays, the pilgrimage continues to attract the hearts of travelers from around the world as they search for themselves, hope to make their wishes come true, seek power spots, and more.

In the area of Ikeda Town called Shinyama, which is near downtown Miyoshi City, there is a special place known as the “Shinyama 88 Sacred Grounds” that has a total length of about 4 km.

In Shikoku’s 88 Temple Ohenro Pilgrimage, which became popular during the Edo Period, pilgrims needed to walk about 1400km around the entirety of the island, and due to the time and costs involved, it was not possible for simply anyone to do. Also around this time, when Ikeda became prosperous from the tobacco trade and local people developed deeper religious beliefs, the Shinyama 88 Sacred Grounds was created as a miniature version of the Shikoku Pilgrimage for those who could not afford to to do it.

In the historical records of Ikeda Town, it is written Nakamuraya Wauemon and several others brought back dirt to the Shinyama site which they retrieved from the actual 88 temples of the Shikoku Ohenro Pilgrimage, and the main contributions for the development of the Shinyama site were made by Hosoda Saijiro, Morimoto Shigeichi, and Sakai Yatokichi…

However, as I spoke with the local group who for the past 10 years have been maintaining the Shiyama 88 site, they explained how the story of the site’s origins has many mysteries. As we sat around an irori hearth together, I wondered with member Uchida Tadahiro, how it could be that when we check the actual recorded ages of the people who supposedly build the site, it doesn’t seem possible for them to have done so together.

He also explained to me how it was not only necessary to visit the site and to research information from historical records, but to also speak with local people who were passed down the original stories and correct any parts that seem inaccurate.

We were at the home of Mr. Uchida, located in the neighborhood of Shinyama. As we sat there talking around the warmth of his irori hearth, I felt like we were boys gathering at our secret hide-out and devising some sort of nefarious plan. For me, this is part of the romantic charm that the Shinyama 88 site holds.

At each of Shinyama’s 88 points there is a statue representing the Buddhist god of the corresponding Ohenro Pilgrimage Temple, as well as a statue for the monk Kobo Daishi (Kukai) who was the wise and revered founder of the Shikoku 88 Temple Ohenro Pilgrimage. About 70 years ago the Shinyama 88 site became so popular and crowded with not just nearby residents but also with people from far away, that local groups would put up shops such as ice cream vendors on the road leading to the site. Nowadays only a handful of people visit on any given day, but local people cooperate to maintain the landscape of the site.

Along the Shinyama route, stone statues are enshrined to represent each of the 88 temples, and all are engraved with information such as the names of the donors from Ikeda Town, which includes samurai families, farmers, businesses which were prosperous during the time due to the tobacco industry, and the people who helped to develop and construct the site.

One of the original donors includes “Uchida Gisuke”, who is an ancestor of current group volunteer Uchida Tadahiro, and the name can be found etched into the 17th stone monument. 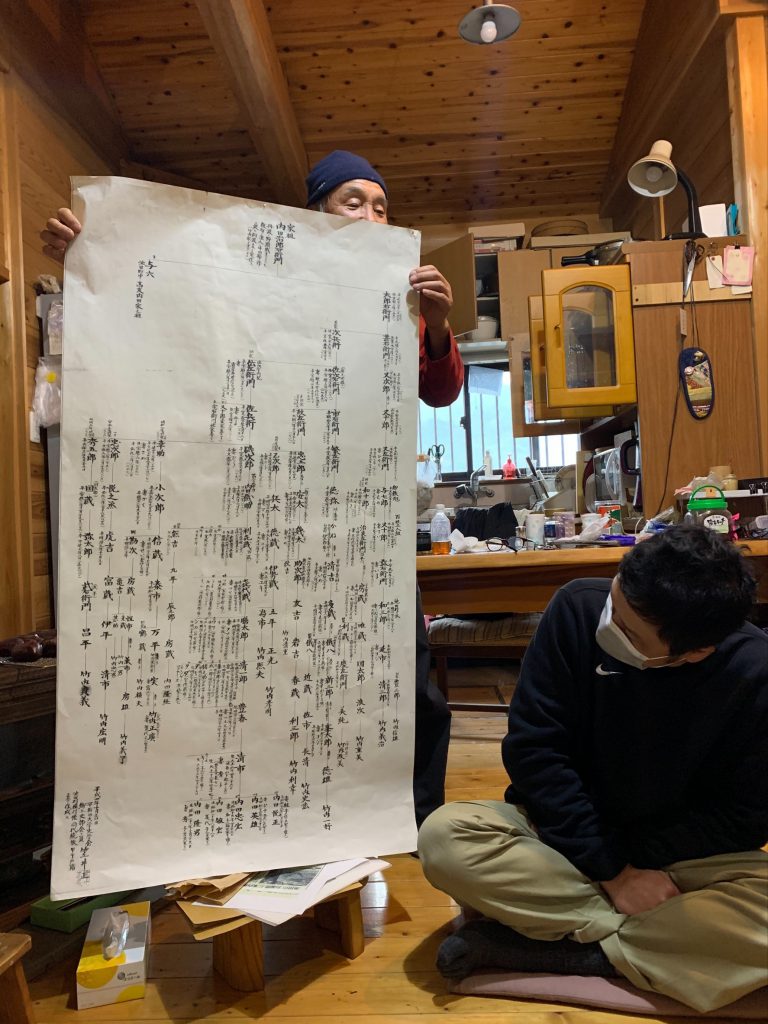 He told me about his family’s history, which has its local origins with how Uchida Gisuke, who worked for the Ikeda government during the Edo Period, earned the status of being authorized to carry a sword and granted the “Uchida” surname. It was fascinating to get a glimpse of ancestral life through his family tree and the historical connections it presents.

It is now Mr. Uchida’s dream that local people can learn about and enjoy the Shinyama 88 Sacred Grounds. Walking through the Shinyama site is not only a way to interact with history, but also a way to discover a new charm of the town that has been revered since ancient times. 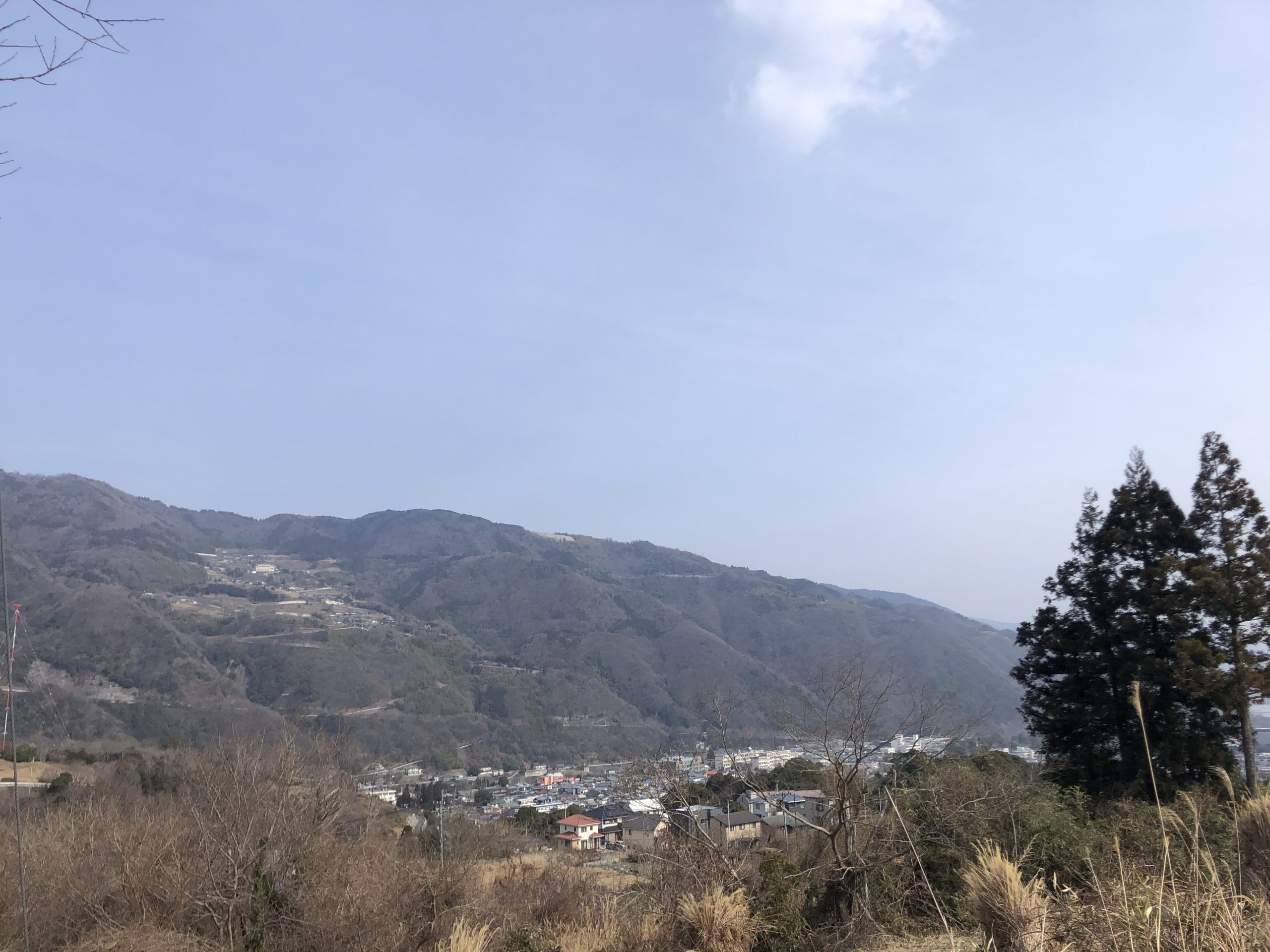 But what about the other stories I heard which were full of mysteries, including how Shinyama is home to 4 ancient temples as well as burial grounds that date back to the 5th century, and how many relics and possible tombs have been unearthed here. Not to mention how it is said, that due to the earth’s geological movements, the area of Shinyama used to be on the other side of the river!

For sure, the stories I heard were captivating and I look forward to detailing them next time.

It seems that the deeper we go into the dreamy, romantic history of the Shinyama 88 Sacred Grounds, the more fascinating it becomes!