As the town grows darker, the snack bar signs start lighting up. If snack bars are counted by their ratio to the population, then the town of Ikeda is one of Japan’s most prominent snack bar towns. The landscape of lined-up snack bars reminds me of the prosperity of the town, which used to be filled with drunken patrons and was originally home to a JT (Japan Tobacco Inc.) factory.

At the first establishment, Eden, I was already in a good mood as I enjoyed a highball while listening to the sounds of the shamisen played by Kayoko Zushi.

Eden opened in 1979. It can be thought of as one of the oldest snack bars in the neighborhood.

Zushi left Ikeda at the age of 18 to work in Hikone, Shiga Prefecture. There, she got married and had a child, among other life events, before returning to Ikeda at age 23.

“I started working for a home electronics manufacturer. Since I was supporting my child as a single mother, I really wanted to live in the municipal housing. But the housing lottery was incredibly competitive. Then, I won the lottery. There are a few times in life when good things happen, or so I’ve come to believe,” says Zushi.

Of course, life isn’t always good. When bad things happen, it means one is being tested. That’s what she tries to think.

While continuing to work at the company, Zushi also started working at a snack bar at night to increase her income. She left her small child with her grandmother. There must have been many thoughts on her mind and things that happened in the meantime, but because of them, she decided to take a leap and start her own snack bar after just two to three years.

“I was a complete newcomer to business, but I’m competitive by nature. The local liquor stores were also very cooperative and let me pay them back late on many occasions. I had always wanted to work while wearing a kimono, and so I’ve always worn traditional Japanese clothing at Eden. In that sense, you could say that the dream of my youth has come true,” says Zushi.

Eden first opened in a different location than where it is now. At the time of its first anniversary event, the snack bar was packed with customers and the streets overflowed with drunks. Compared to those days, the Ikeda neighborhood is completely deserted now. Naturally, Eden must have had its ups and downs.

“No matter what the job is, you have to give it your all.”

“As long as you work hard with this spirit, someone will be there to lend you a hand when tough times come. Sometimes, you will have to make a choice. Even if you were to choose the wrong one, things naturally stop when they’re not right. That’s how I feel about life now,” says Zushi.

Her competitive nature was also apparent whenever she played golf with her customers. At one time, she even played as a single-digit handicapper. She was the champion of the well-known Kotohira Country Club. And occasionally, she hosted golf competitions with as many as 200 of her regular customers.

Zushi keeps a treasured album of photos and snapshots from those competitions as well as records from back then. Flipping through the album’s pages, she reminisced about those days. I’m sure she spends time recounting these memories with her longtime regular customers, sharing the nostalgia together. 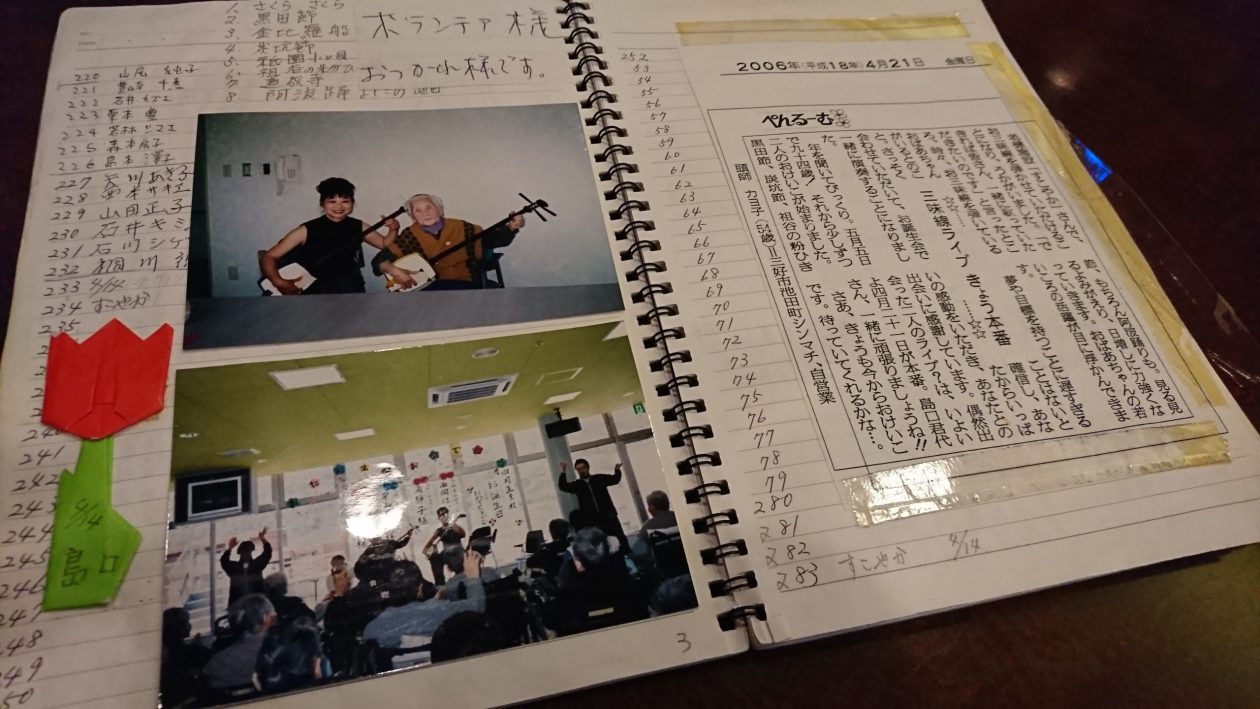 Besides photos of golf, Zushi also carefully preserves the materials from each of her shamisen performances.

You may have been wondering about the snack bar’s name, “Eden.” According to Zushi, she named it after a pachinko parlor that she often saw back when she was working in Hikone. This story may be a bit of a letdown for those looking for a deeper answer, but she seems unconcerned about the name, and I must admit that most names are probably devised in a similar fashion. Her cheerfulness about the matter is just another part of the charm of Eden and of Kayoko Zushi herself.

This snack bar has lived through a lot, and so has its mama-san. The shamisen, too, sometimes produces the bright and lively sounds of the Awa Odori dance, and other times it expresses the wabi-sabi of life. Why don’t you open the door of Eden and see what kind of sound is playing tonight?