As the town grows darker, the snack bar signs start lighting up. If snack bars are counted by their ratio to the population, then the town of Ikeda is one of Japan’s most prominent snack bar towns. The landscape of lined-up snack bars reminds me of the prosperity of the town, which used to be filled with drunken patrons and was originally home to a JT (Japan Tobacco Inc.) factory.

There I found a brightness rivalling the Okinawan sun.

“This is delicious. Try it. I had it sent from Okinawa,” Mieko Negoro tells me. Negoro, one of Ikeda’s many mama-san, is sitting on a sofa holding a type of confectionary that you rarely see around here. Originally from the city of Uruma in Okinawa Prefecture, Negoro used the Okinawan word chura, meaning ‘beautiful,’ for the name of her bar Yuimaru Chura.

History buffs may have noticed it already, but Negoro’s surname is the one she took after marriage; the name is very common in Wakayama Prefecture. When I ask for her maiden name, Negoro writes down the kanji.

I couldn’t make it out at all.

The kanji is read as ‘Nakandakari,’ which is an uncommon surname, even in Okinawa.

For that reason, we decided to go with Negoro’s married name for this article, which she normally uses. When Negoro left her home of Okinawa and came to the main island of Honshu, she needed a passport. This was when Okinawa was under the rule of the US government. Younger readers might not be able to believe it.

After all that, I wondered why Negoro came all the way to Miyoshi City on the outskirts of Tokushima Prefecture to get married. “There was a good guy!” she replies without hesitation, laughing good-naturedly.

“But even now, I’m glad that I came here to Ikeda. Perhaps because of the nature of the townspeople, or their compassion. It’s really comfortable here,” she adds.

It seems that just like Negoro, many women came from outside the prefecture to get married here, and apparently the young brides, new to Tokushima, would get together at that time. At these gatherings, there would be about 20 participants, and aside from Okinawa, some came from Aomori, some from Nagoya, and others from elsewhere. Negoro says that once a month, the women would meet up to eat, drink, and chat together. Maybe this was a way to release stress.

Even so, they still missed their hometowns. Negoro would also typically go back to Okinawa around five to six times a year, however due to COVID-19, she hasn’t been back once since February 2020. On the other hand, the bar hasn’t been closed during the pandemic; Negoro has continued to keep the bar open after carrying out measures to prevent infection. While she has seen a drop in numbers, there has still been a non-stop stream of customers dropping by. 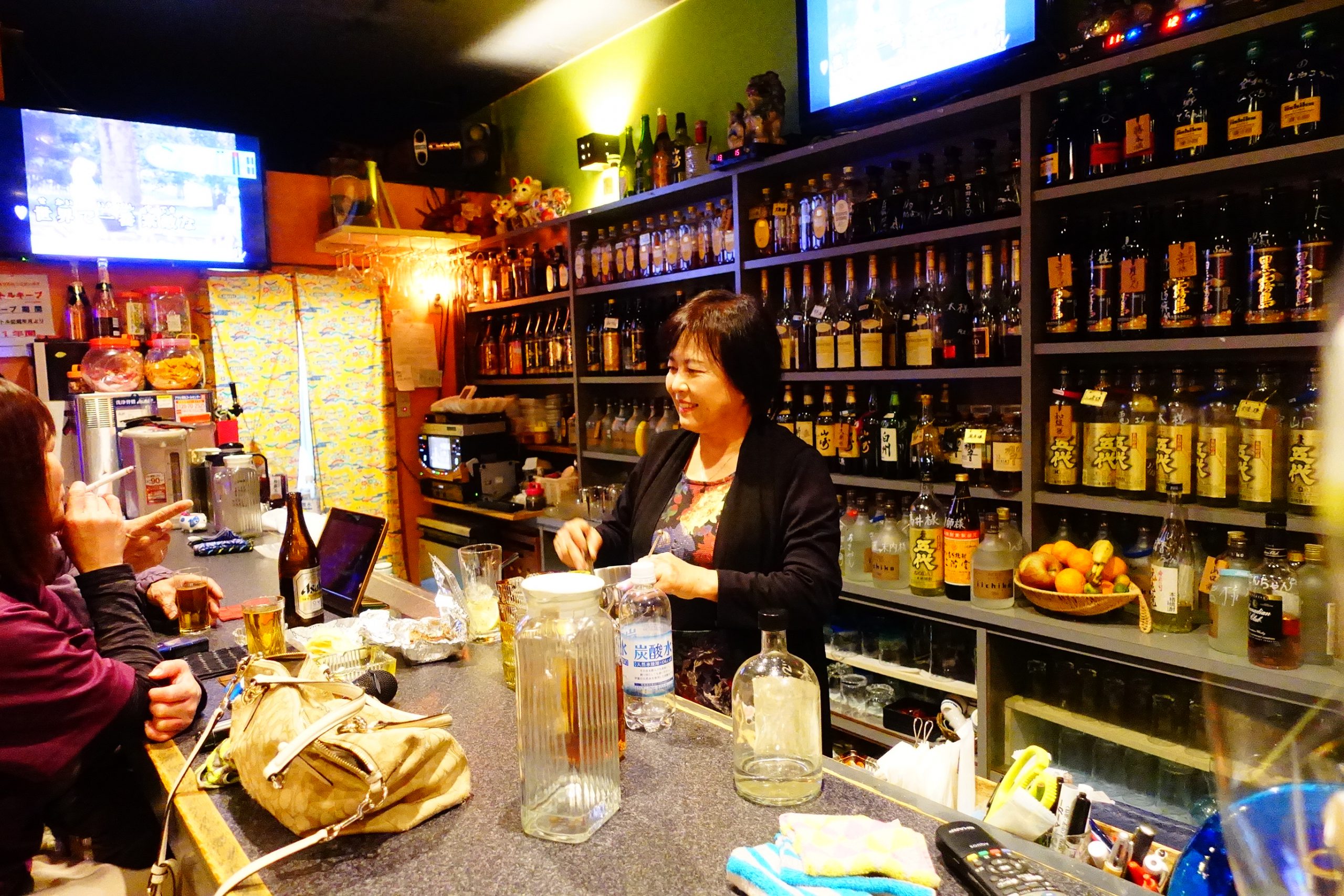 Encountering the bright and bubbly personality of Mieko Negoro, the mama-san at Yuimaru Chura, will surely help chase away encroaching feelings of fear and isolation while stuck at home during the pandemic. Whether it’s due to her Okinawan background, or her personality, Negoro’s magnanimous, cheerful, and excited disposition will lift your spirits when COVID-19-related melancholy starts to sink in.